When an Obama protestor unveiled a Confederate flag, right-wing tweeters knew who was to blame: liberals 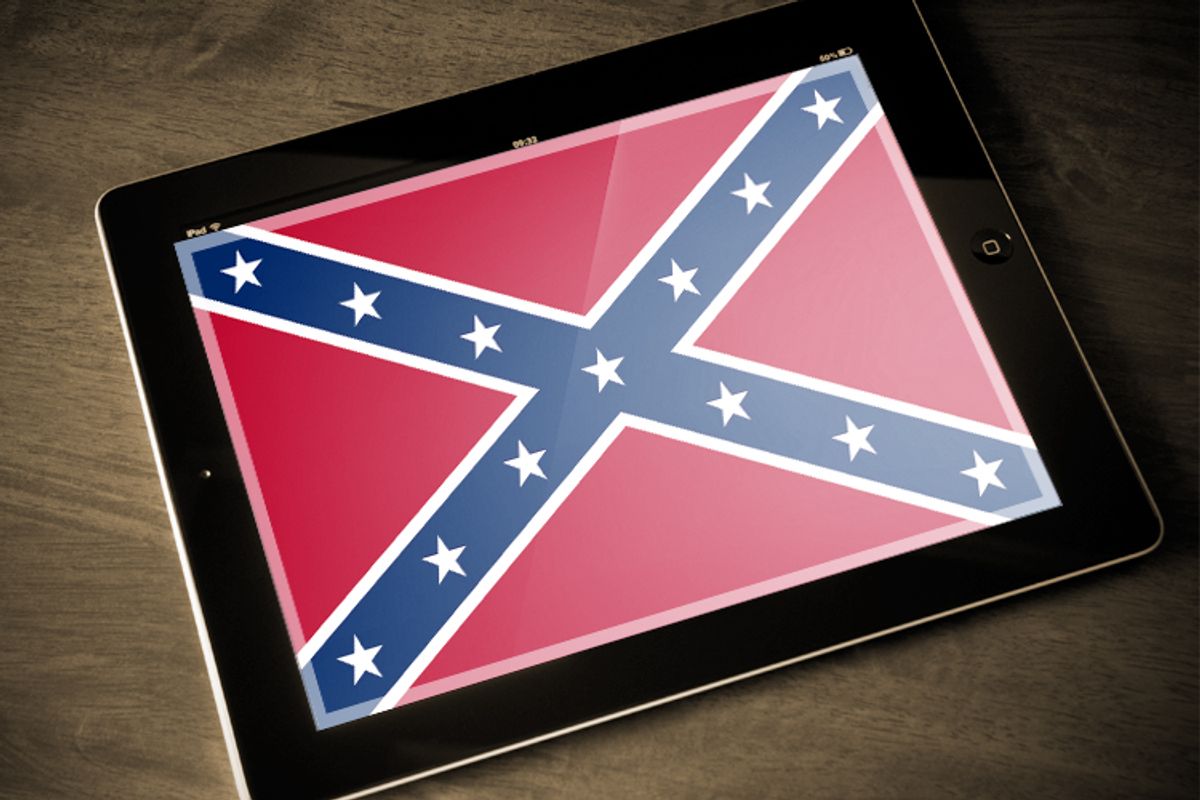 While Sunday's protest rally against the closure of Washington, D.C.'s WWII memorial was seen as a stirring victory to those on the right, most other observers were instead struck by the unhinged vitriol directed at President Obama and, most of all, the unfurling by one protestor of a Confederate flag. In reference to the flag, Jeffrey Goldberg might have put it best, tweeting:

In many parts of America, waving a Confederate flag outside the home of a black family would be considered a very hostile act.

But while Goldberg's response is hopefully the norm, the response among right-wing tweeters was outrage, too — but not at the flag or the man who brought it with him. Rather, right-wing animus settled on the supposedly liberal media, conspiring to make the protestors look bad. Indeed, in the right's telling, the conspiracy went deeper than just media bias: the flag-bearer, who has now been identified as Michael Ashmore of Texas, was likely a secret liberal, trying to make conservatives look bad.

The response from popular right-wing blogger Glenn Reynolds (aka Instapundit) was hardly unique:

@JeffreyGoldberg Prob a plant. Usually is.

Anyone identify the guy holding the Confederate flag outside WH? Possible liberal plant? Curious how HUGE his flag was, no?

Well @joanwalsh I'm glad to inform with facts, the lone guy with confederate flag, was a Liberal plant from the OFA. Rally was nonpartisan. — AnaMcInfidel (@ana_mchara) October 13, 2013

It's a bipartisan rally at #1MVetMarch as a liberal democrat shows up with confederate flag. Guys a plant from OFA pic.twitter.com/oQXD12vD7J — John Gort (@JohnGort) October 13, 2013

@TheRickWilson did they check to be sure he's not a local lefty plant? — S D Winkler (@sdwinkler) October 13, 2013

Of course, most right-wing tweeters weren't quite so delusional. But even the saner ones were more upset by the media's noticing the flag than the flag's actual presence:

Give liberals this: They figured out that the one clown with a Confederate flag on Pa. Ave. is the true leader of American conservatism.

Good for the media. They've finally found the grand mastermind of all conservative politics: some random jackass with a Confederate flag.

By tomorrow, the portrayal of the #1MVetMarch will be that of crossburnings and pointy white hats. — Rick Wilson (@TheRickWilson) October 13, 2013

The media ignored the event until ONE person showed up with a confederate flag..gotcha! NOW their narrative is satisfied. #1MVetMarch

Hey mainstream media, it was one damn confederate flag out of thousands of good veterans. Nobody was pledging to it.

@JustenCharters @Just_a_Texan and seriously. who really cares. it's a flag. they have to make an issue out of something. no arrests. boring.

So there you have it: the presence of the Confederate flag at a right-wing rally is the devious handiwork of nefarious liberals — and not that big a deal, anyway!