Very sneaky, Walmart: How the mega-retailer rolled back California regulations 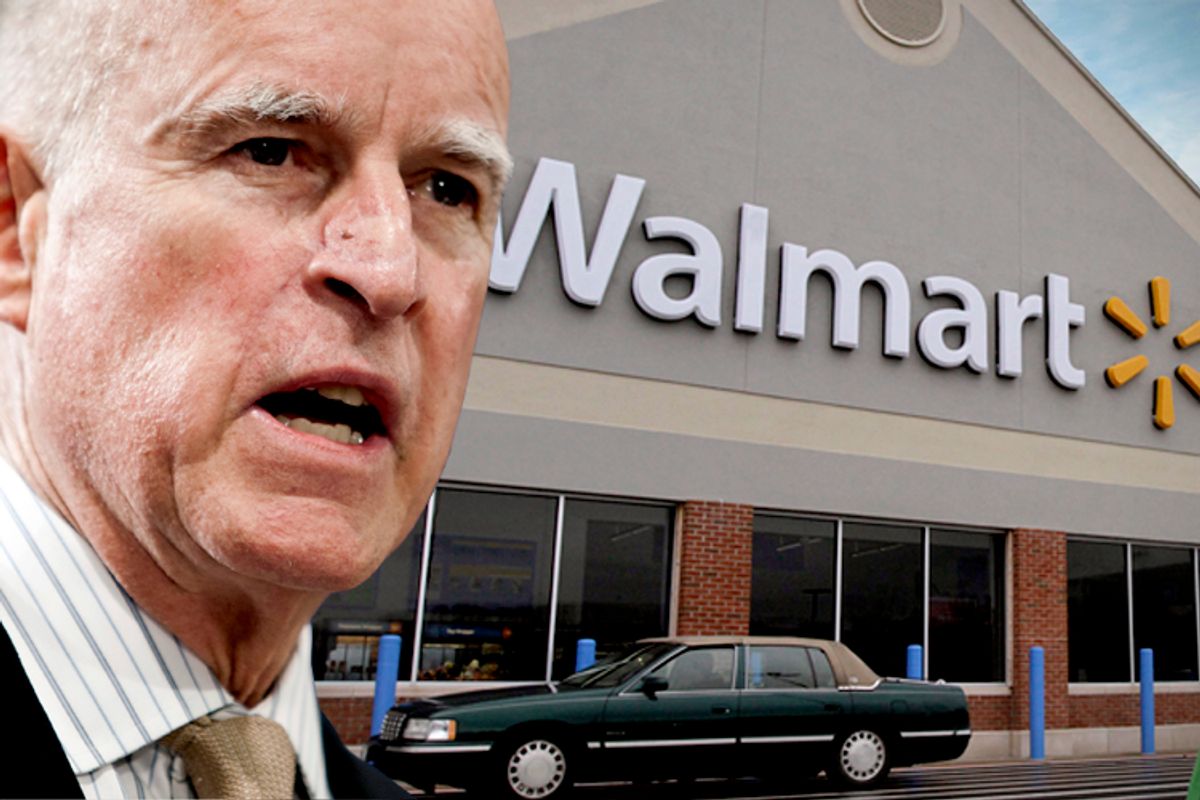 While Washington has been warring over the shutdown and the debt ceiling, California Governor Jerry Brown has signed bills expanding access to abortion and restricting local police collaboration with Immigration and Customs Enforcement – bills that advocates hope will join past Golden State laws in proving to be national precedents. But if those bills have gotten little notice amid the showdown in Washington, another – signed by Brown the Friday afternoon before the shutdown – has gotten even less. It’s a “reform” that critics say waters down what’s been the country’s strongest statewide environmental law – and represents Walmart’s latest lobbying coup in a state where Democrats control every branch of government.

“It’s amazing to me how few people are willing to stand up to this corporation,” said Assemblywoman Lorena Gonzalez. “And mainly because they’re afraid.”

The new law, SB 743, follows more than a year of wrangling between industry, labor and environmental groups over changes to the California Environmental Quality Act, a 1970 law (signed by then-Governor Ronald Reagan) requiring environmental impact reports on many development projects. Business groups have long sought changes to the law, as have some Democratic mayors and – on certain points – some environmentalists. Along with special exceptions for a new stadium for Sacramento’s basketball team, the new law restricts some grounds for CEQA lawsuits. “It’s going to give much more leeway to big companies to just come in and ram these projects through,” said James Araby, who directs the Western States Council of the United Food & Commercial Workers union.

As I’ve reported, the UFCW has been locked in a multi-decade struggle against Walmart, and is closely tied to the retail workers group OUR Walmart, whose members have staged repeated strikes over the past year – activism which they allege Walmart punished by illegally firing 20 workers. Frustrated by labor laws which they argue fail to protect employees who try to organize, or secure meaningful collective bargaining for workers who want it, unions in recent decades have increasingly turned to a broader range of allies, activism and legal levers to compel companies to eschew union-busting and negotiate in good faith. Unions and environmentalists in particular have often made common cause against Walmart, although the retail giant (with guidance from Democrats including Bill Clinton) has made headway in mending relations with green groups.

The UFCW and Walmart – and allies on both sides – faced off with particular fury not long before the final SB 743 vote, as legislators considered language labor argued was needed to stop the bill from becoming a loophole for unchecked Walmart expansion. Assemblywoman Gonzalez told Salon that language in the bill restricting the use of traffic concerns to block certain developments amounted to “an exemption for Walmart,” and that when progressives attempted to change that language, “Wal-Mart lobbyists were working overtime…The Wal-Mart lobbyists were the only ones that I saw working that provision.”

Gonzalez, a former labor council secretary-treasurer, told Salon that in fights with Walmart, “one of the only tools we’ve been able to use is CEQA, and specifically the traffic impact of Wal-Mart.” Following what she called “massive lobbying by the Chamber of Commerce” and “mainly by Wal-Mart,” the labor-backed amendment failed. UFCW’s Araby told Salon that Walmart, which “has always hated this law,” mounted a full-court press in the amendment fight. “They wanted to get this out of CEQA,” he said, “so they could go into these communities and not have to deal with oversight, regulation on their development.”

Asked about Walmart’s role in the CEQA fight, a Walmart spokesperson emailed that “CEQA affects a wide range of industries and there is a broad-based business coalition that led the legislative discussions.” She referred Salon to the CEQA Working Group, a coalition including dozens of business groups, for further comment. Jennifer Hernandez, an attorney for the coalition, told Salon that outside the provisions specific to the basketball arena, the CEQA language signed by Governor Brown had been watered down to the point of having only an “infinitesimal” impact. Hernandez said critics’ invocation of Walmart’s role in pushing the bill “almost seems like hysteria,” and that “no one wants to denigrate the environment, for Christ’s sake.” Given that public projects like bike lanes can face costly and time-consuming CEQA suits, said Hernandez, “this is like taxpayers versus special interests.”

Hernandez argued that the law’s language curtailing traffic congestion as a consideration for some projects essentially duplicated a prior law, and that language restricting the use of parking as a consideration would have no impact because air quality consequences of parking were still regulated. “One is already on the books in 2006 and has no new effect,” said Hernandez, “and the other is a change in vocabulary without a change in law.”

Bruce Reznik, who directs the Planning and Conservation League, called that argument “frankly kind of a little disingenuous,” given that changing which impacts are considered would change which mitigation measures would be required, and that the legislation’s overall impact would depend on yet-to-be drafted language from the state Office of Planning and Research. “It could be transformational,” said Reznik, whose group helped shape and pass the original CEQA law. Because “it wouldn’t go very far if Wal-Mart and Chevron” were the face of CEQA criticism, charged Reznik, business groups try to “put this pretty face” on their cause. In reality, he charged, “They don’t want the public to have any input.”

“We all know that Wal-Mart is one of the biggest targets of CEQA lawsuits,” Reznik told Salon. He said that, like some other environmentalists, he supported some of the initial aims of CEQA reform, but opposed the law ultimately signed by Brown because it lacked needed protections to maintain a voice for local communities in development.

Asked about the bill, a spokesperson for Governor Brown emailed, “We were pleased to play a part in broadening the impacts of this bill.” In a September statement, State Senate leader Darrell Steinberg, the bill’s author, said its “changes fuse CEQA with the promotion of smart urban growth, which is a victory for the economy, for the environment, and for California.”

The CEQA changes follow a series of offensive and defensive victories for Walmart against regulation in California. A bill requiring economic impact reports prior to opening big retail stores like Walmart was vetoed by Governor Brown in 2011. A bill designed to dissuade or punish companies that cut workers’ hours in order to shirk Obamacare requirements – what supporters called the “Wal-Mart loophole” - died in the State Assembly in June.

And, five weeks before the changes to the country’s strongest statewide environmental law, Walmart won what critics call a de facto repeal of Sacramento’s citywide law regulating the expansion of “big box” stores, formerly the nation’s toughest. Like the CEQA change, the curtailment of the big box bill was shepherded and signed by Democrats; it passed the Sacramento City Council 6-2 and was signed into law by Mayor Kevin Johnson. (Disclosure: While employed by the international union UNITE HERE, I worked in Sacramento and supported election campaigns there including Johnson’s mayoral run in 2008.)

That spurred an investigation by California’s Fair Political Practices Commission, which is considering allegations that the mayor had an improper conflict of interest because Walmart and the Walton Family Foundation, between them, had donated to groups for which Johnson had sought support, to an education reform group Johnson started, and to Students First, the national ed reform group started by Johnson’s wife Michelle Rhee.

Asked about that investigation, a City Hall spokesperson said the city did “not speak about ongoing investigations”; Walmart did not provide comment; and a Walton Family Foundation spokesperson emailed that the Foundation was “not involved in company business decisions.” (While the Walton Family Foundation is legally distinct from Walmart, family members founded the company, own just over half of its stock, and chair its board.)

As I reported with Lee Fang, the Walmart Foundation has often lavished cash on cities in which the company is seeking to expand (its then-president, Sylvia Matthews Burwell, was tapped by Obama in March to run the Office of Management and Budget). Assemblywoman Gonzalez said that in her San Diego district, “almost every event we’re at is sponsored by Wal-Mart,” and “their tentacles reach into all these other interests, and as a result they have a lot of power.”

UFCW’s Araby said the new law is poised to pave the way for greater and faster Walmart expansion in California. Given Democratic dominance in the state’s politics, he said, “if you want to have influence, you need to play with Democrats…retailers are playing with Democrats.” He added that “they can move a lot of money… and you know, money talks.” Araby told Salon that “labor got rolled on these issues. And our friends – some of our friends – even though they say they were helping us, at the end of the day, we were not helped.”