What if the Tea Party overthrows John Boehner? 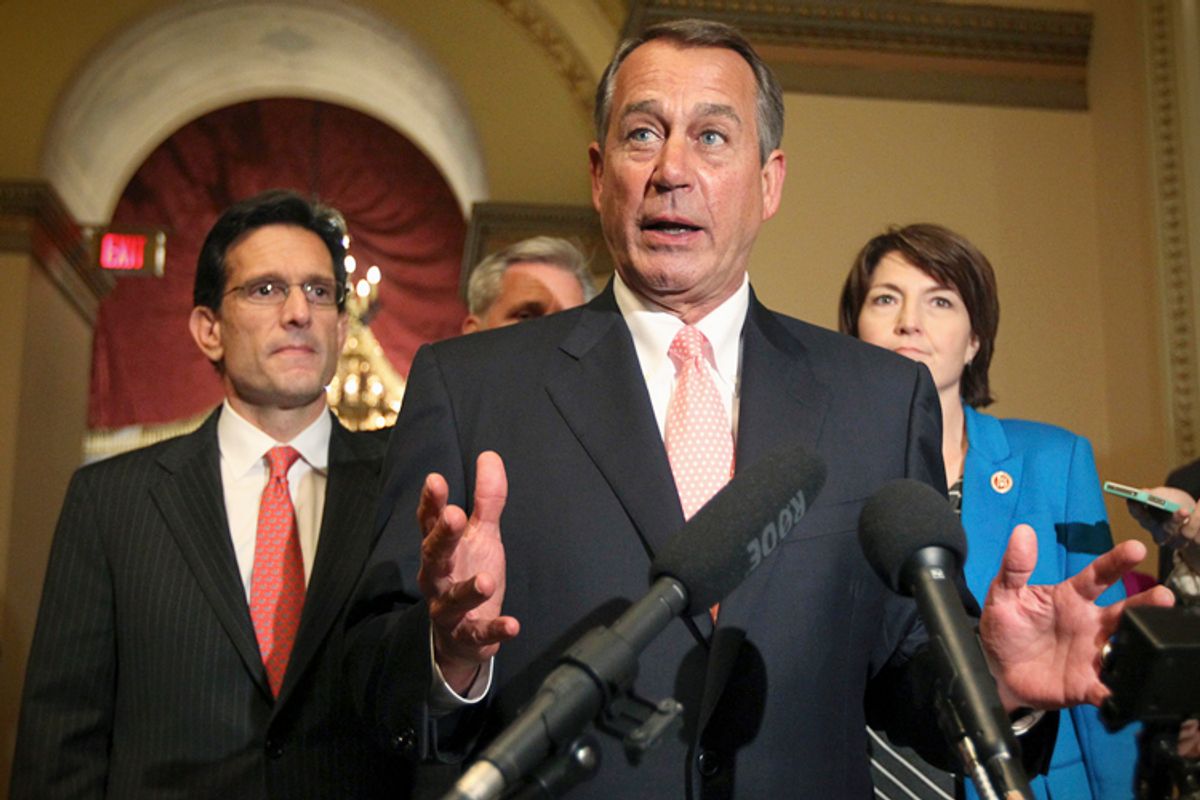 Assuming a deal to raise the debt ceiling and reopen the government eventually materializes, the big question remains: Will it be able to survive the House? As Salon's Brian Beutler has detailed in recent weeks, the answer resides almost entirely within the mind of one man, Speaker of the House John Boehner. If he wants to, Speaker Boehner can break the so-called Hastert Rule — which says that no bill will come to a vote unless it’s supported by a majority of the majority — and pass the deal with overwhelmingly Democratic votes. Or he can refuse, and plunge the world into grave economic uncertainty.

While only John Boehner knows what he'll do for sure, there have been reports of the speaker informing close confidantes that he will not allow the U.S. to hit the debt ceiling, period. If true, that means Boehner is willing break the Hastert Rule and pass a bill to raise the debt ceiling with a vast majority of Democratic votes. Breaking this unofficial rule would be a victory for the forces of sanity and competent government. Yet it could spell trouble for Boehner, who would potentially face a coup attempt from the most radical and recalcitrant members of his caucus.

But would a coup be doable? And if so, how would it work?

The truth is that no one really knows; the Speaker of the House has never been deposed before, and the specifics of mounting a putsch are tremendously unclear. What is known is that it would require the filing of a “resolution declaring the Office of Speaker vacant.” Because this resolution would concern a constitutional privilege, it would be considered a “privileged motion,” meaning that it would go straight to the floor for a vote, bypassing any potential parliamentary holdups. At that point, a straight House majority — not a majority of the majority, but a simple majority — would be enough to declare the speakership vacant, necessitating a new vote for a new speaker. A simple majority would decide that vote, too.

For the Tea Party elements who are interested in potentially deposing Boehner to succeed, then, they’d not only need to cobble together an overall majority to depose Boehner, but they’d also need to do the same to elect his replacement. In both cases, it’s hard to envision 218 Republicans voting together and against Boehner — and while one could expect a good number of Democrats ready and willing to vote against the Ohio congressman, it’s much more difficult to fathom what replacement candidate could please both sides of this hypothetical bipartisan pro-coup bloc. In fact, it’s easier to envision Democrats teaming up with a small group of relatively moderate GOPers to elect a speaker less conservative than Boehner, an outcome the Tea Party contingent surely wants to avoid.

Again: This has never happened before, so no one knows for sure how it’d all shake out. But from what we can guess, it doesn’t look especially promising for the Tea Party faction within the GOP. They may come to hate John Boehner — but he’s probably the best they're going to get.