Winfrey disputes Diana Nyad's atheism -- and she's the one who's wrong 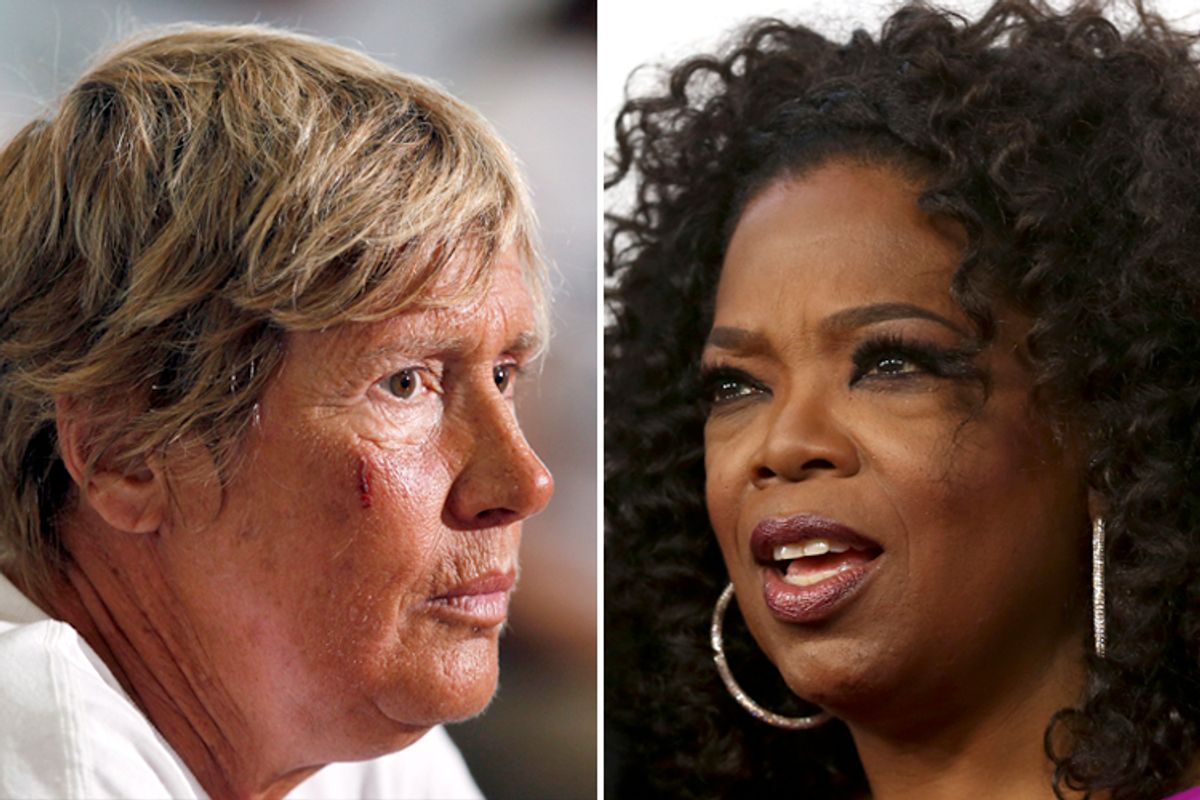 On a "Super Soul Sunday" with the 64-year-old long distance swimmer this weekend -- just one month after Nyad's extraordinary, triumphant swim from Cuba to Florida -- Winfrey took strong issue with Nyad's assertion that she's "not a God person, but a person deeply in awe." It's true that perhaps appearing in a venue with the word "soul" in it might seem an unusual choice for a self-described atheist, but Nyad explained. "I don't understand why anyone would find a contradiction in that," she said. "I can stand at the beach’s edge with the most devout Christian, Jew, Buddhist, go on down the line, and weep with the beauty of this universe and be moved by all of humanity — all the billions of people who have lived before us, who have loved and hurt and suffered. So to me, my definition of God is humanity and is the love of humanity."

Oprah quickly stepped in with some semantic disagreement. "Well, I don’t call you an atheist then," she said. "I think if you believe in the awe and the wonder and the mystery, that that is what God is. That is what God is. It’s not a bearded guy in the sky." But Nyad, who knows a thing or two about being undeterred, pressed on, explaining her skepticism of a "creator or overseer." Later, Oprah, still trying to pin Nyad down, asked her if she felt she was "spiritual," Nyad replied, "I do. I think you can be an atheist who doesn’t believe in an overarching Being who created all of this and sees over it. But there’s spirituality because we human beings, and we animals and maybe even we plants, but certainly the ocean and the moon and the stars, we all live with something that is cherished and we feel the treasure of it."

Oprah's swift insistence that to experience awe and wonder disqualifies one from atheism was immediately picked up on and criticized as a misunderstanding of nonbelievers. As Hemant Mehta explained on Patheos on the "awkward" exchange, there needn't be anything religious or spiritual at all about an "amazement at how life, the universe, and everything works — how evolution made it that way and how lucky we are to be a part of it at all." Religion doesn't have the copyright on awe or gratitude.

Winfrey makes a fair point that a lot of nonbelievers don't always grasp – having faith doesn’t mean you worship an old man in the sky. It also doesn't mean you are incapable of "amazement" at the wonders of science. (Despite what Kirk Cameron and company may have led you to believe, Christian does not equal creationist.) But in much the same way that a recent evangelical billboard in Times Square flippantly told atheists "You're wrong," Oprah's lecture to Nyad ultimately comes off as condescending. Nyad never mentioned an old man in the sky. She never said that was what she rejected about religion. In fact, she spoke instead of sharing in the wonder of the world with people of all different belief systems.

Thankfully, our understanding of belief and non-belief is growing broader and more fluid all the time. Christians can admit they harbor doubts. Atheists can seek the community and ritual previously found only in traditional churches. When we mingle our magnificent human capacity for skepticism and hope and wonder and curiosity, we can arrive at some truly beautiful places. It's when we're unyielding and unquestioning and determined to make everybody see the world exactly as we do that things get ugly and stupid.

Even if Oprah seems to have pushed her into saying it, Nyad can call herself "spiritual" if she wants. It doesn’t have to mean the same thing it means to someone who practices a religion. It's her word and her interpretation of it. And no atheist on the planet needs a believer to tell her that she is wrong, or that she secretly clings to the concept of God after all. Here's a tip, whether you're a talk show host or just a person having a conversation with another person: If someone says she's an atheist, the appropriate response is, "Fine by me." That doesn't mean you can't continue to have a conversation and ask questions – as Winfrey and Nyad did. It doesn’t mean the conversation will be easy or conclusive – as Winfrey's and Nyad's was surely not. It just means we're all capable of finding common ground if we choose to. It means that what Nyad calls "the love of humanity" belongs to all of us. And we can argue over who has a greater claim to it, or we can stand together on the shore and share in it.