For the women in my family, sex was shameful. But when I wrote a book celebrating it, Grandma's name was perfect 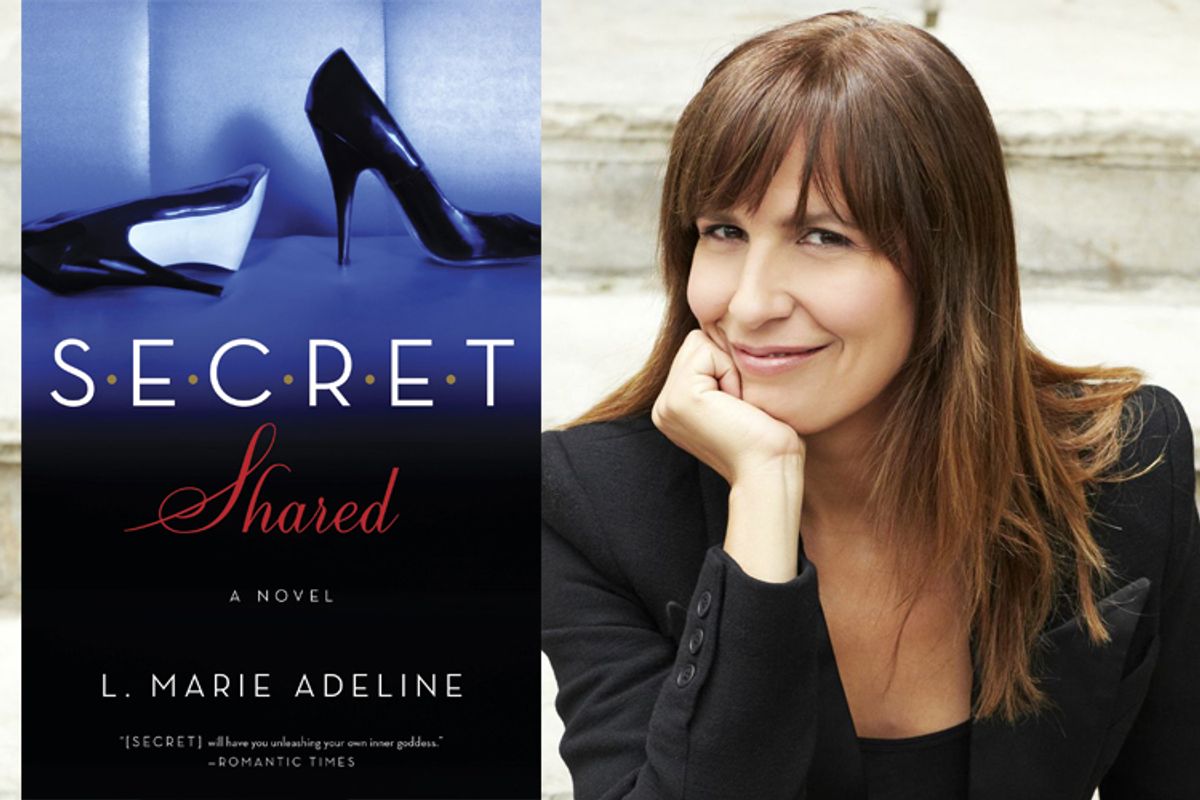 She never talked about sex. She never told us about dating or boys except to say, “Don’t bother.” She could barely bring herself to mention menstruation. I suspected that my mother had roughly calculated the age at which my younger sister and I might start our periods, because around the time I turned 14, a giant box of Kotex maxi-pads (plus belts!) made their mortifying appearance in the cupboard below the vanity. My mother hadn’t had a period since an emergency hysterectomy some 10 years earlier, something she’d bring up in horrifying detail whenever possible.

“Almost bled to death with that one,” she’d say, blowing cigarette smoke in the general direction of my athletic little brother, who at 11 was already taller than her. “Four kids in a row. You guys almost killed me. Don’t have sex. It makes you pregnant, and it’s just not worth it. No offense.”

Sex led to pregnancy, then the progressive erosion of the body, resulting in hospitalization and the loss of a major organ. Sex wrecked everything.

But her sex-aversion was more complicated than that. My parents' marriage was already in shambles by the time I was walking Barbie brides down imaginary aisles. And since single motherhood made luxuries out of such things as separate bedrooms for grown women, my mother couldn’t have had much of a sex life after my dad left even if she’d wanted to. There were two boys and two girls growing up and since my mother could only afford a two-bedroom house, she slept on the foldout for years.

My mother would say her sexual coldness was inherited. Her own mother, after all, was born in 1899, an era immortalized on PBS’s "Downton Abbey." I sometimes have to remind myself that the Grantham Girls were my nana’s contemporaries, women who married as virgins, were spinsters if still single at 25, and who lived during a time when a casual walk with an eligible bachelor was scandalous if he didn’t immediately propose. My nana was an actual 40-year-old virgin when she finally married my grandfather, 45 when she finally had my mother. After that she lived a long chaste life, and walked my mother to kindergarten with a full head of winter-white hair.

As a teen, I did chores at my nana’s house after school for extra money. I’d scrub the bathroom floor, stooping to peel the diabetes pee sticks off the chipped tiles while she watched her ‘stories’ on television, her swollen legs propped up on an ottoman she'd embroidered. I'd hand-wash her complicated undergarments, hanging out her thick circulation stockings to dry next to the white bras puffed open like giant sails. They’d swing in the wind beside the greying lace slips she wore beneath heavy wool dresses. The clothing seemed designed not just to keep my grandpa neutered, but also completely deprived of a flash of flesh for decades.

Perhaps it wasn’t a coincidence I stopped doing chores for my nana around the time I started having sex with boys. After a decade and a half of hidden flesh and mystery blood it was as though I could not keep my clothes on any longer. I understand Lena Dunham’s compulsive nudity. Not that I became shameless like her, or one of those flappers my nana would have tsked at. Shame didn’t leave. It was simply displaced by copious amounts of alcohol, which helped blunt the shock of my own flesh, let alone that of the boys I fumbled around with. It helped keep that shame at bay, at least until the shuddering mornings, when I quietly teetered around my mother as I got ready for school, more concerned she’d smell boys on my skin than the booze coming out of its pores.

I hid all the evidence of my burgeoning promiscuity from the prudish women in my family, including my sister. It was my perfect wicked secret, such a marvelous rebellion. My sister and I both kept diaries as teens, but the wall between us was so high, neither was even aware of these diaries’ existence until well into our twenties, when we’d cue up specific events to note our disparate perspectives. I also kept my birth control pills hidden deep in my wallet. And since the kind of boys I dated mostly just honked from idling Camaros, my sex life was rarely scrutinized. Then came the dawn when an older boy furtively dropped me at the edge of our gravel driveway and sped off, probably sensing my mother’s rage the way wild animals flee tsunamis way before frightened people do. As I approached the house, I noticed a row of garbage bags, stacked side by side like fat black tombstones. All my belongings were inside, clothes mostly, but I could also see the right angles of a jewelry box and the odd toe of one of my cowboy boots. I punched open the front door, to my mother smoking on the couch, her back to me.

“I’m kicking you out of the house. Out all night. I can’t have a slut living here.”

She yelled something else about my younger sister and brother not needing to see me “traipsing home at dawn” “drunk and disheveled” and “getting away with murder.” After all, my dad “got her pregnant” a mere three months into dating him. She “had to marry” him. I always suspected she had three more children in a row to camouflage the idea that my oldest brother was a slutty accident. As second-oldest, I often think if it weren’t for her sexual shame, I’d never have been born. In her mind, I was getting away with everything while she had gotten away with nothing.

I sulked it out at my friend Lydia's house for a few weeks, where her mother was even more oblivious to our behavior than my own -- if that was possible. I came home more subdued, but pretty much a chain-smoker.

Around this time my grandpa died suddenly, and my nana moved in with us briefly. It soon became clear she needed full-time care. But at the hospital where she lived for years, my nana grew strangely bawdy as death grew closer. Maybe it was dementia, or maybe finally free from the threat of actual sex or any sensuality, she began to openly flirt with orderlies. She flashed skin now and again to elicit a giggle from me or one of my stiff siblings, forced to make a weekly visit. Her behavior mortified my mother, but I loved her all the better for it. We finally had something in common.

Not long after nana died came the awful cancer that killed my mother. It had started in her left breast, and spread throughout her blood, and then her brain. The doctor told her it was “old” by the time they found it, something she could have caught had she felt it herself. Fact was, I doubted my mother ever laid a hand on herself. If sex wrecks everything, so too, I decided, does the utter lack of it.

Looking back, I wonder if it’s ironic or if it was inevitable that I eventually become a writer of erotic fiction. Sometimes children boomerang from parental extremes. In fact, a few years after my mother died I stopped drinking. I also stopped having sex for a while, since drinking had often been a necessary part of foreplay. Then last year after a brief, vivid fling, I sat down and wrote an erotic novel over the course of a few months, a product, I think, of a middle-aged awakening, and readers' seemingly renewed interest in erotica. I had written two previous novels, both of which contained elements of sex, but nothing too explicit. After all, my mother was still alive. What would she think? But this time I wanted to write a sexual fantasy, one about a woman who finally overcomes her own reluctance and shame, with the help of other women who’d done it themselves. The plot centers on a group called S.E.C.R.E.T., made up of a kind of benevolent matriarchy whose sole mandate is to generously assist one lonesome gal in experiencing her wildest sex fantasies. And I wrote it in a way that wasn’t degrading but rather it was fun, fearless and freeing. It’s also called "S.E.C.R.E.T.," but its subtitle — no judgment, no limits, no shame -- had long been a quiet, personal mantra of mine.

I hate to admit it but "S.E.C.R.E.T." isn’t something I could have written if all my own prudish matriarchs were still alive. The reason I wrote it under a pseudonym, however, had nothing to do with shame. It just seemed to be the thing to do. But when it came time to pick the name, I wanted it to mean something.

“Do you think it would be mean to put nana’s name on my dirty book?” I asked my sister, when I ran L. Marie Adeline, nana’s maiden name, by her.

My sister said, “I think it would be hilarious!”

Then I asked my sister what she thought our mother would have made of "S.E.C.R.E.T."

“I think mom would have been very proud of you,” she said. “But she would probably have burned the book.”

That’s true. I only hope she would have read it first. Even secretly.

Lisa Gabriele is the author of the bestselling novel, and "SECRET Shared" which she’s written under the pseudonym, L. Marie Adeline. She is also the author of "Tempting Faith Di Napoli" and "The Almost Archer Sisters" under her own name.