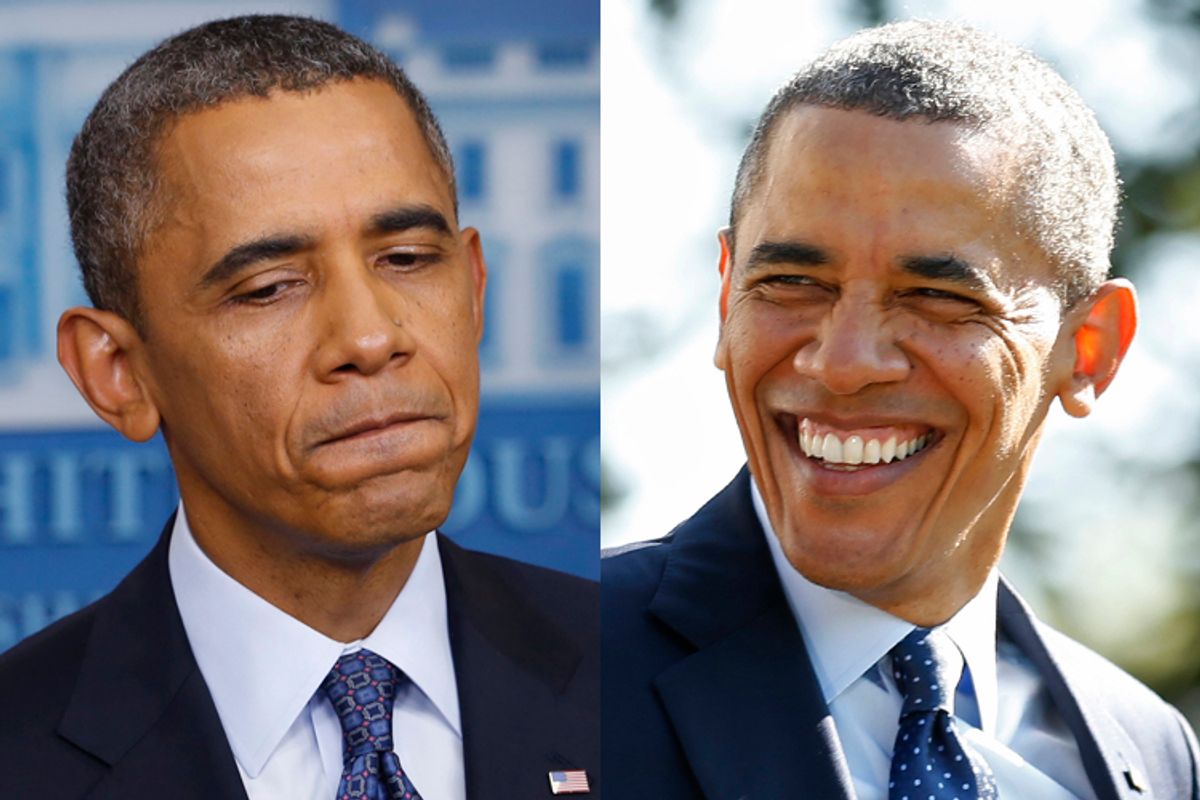 We find ourselves in a moment of profound conflict. I'm not referring here to the conflicts in Washington hurtling the United States closer to default, nor do I mean the intractable conflict in Afghanistan, nor the creeping drone wars reaching unfettered in to the Middle East and Africa, nor do I mean the neo-Cold War-style brinkmanship with Russia or Iran. All these (viciously real) conflicts relate to the one I have in mind, though. But specifically I want to talk about this strange current moment of what we might call a conflict of sovereignty.

On Tuesday morning alone, major political headlines provided two near-contradictory narratives about the power of the president. In one set of stories, President Obama is flailing with limited recourse in a Congressional impasse over the looming debt ceiling. The government shutdown has reached its second week -- the fallout is spreading to the country's most needy -- and the president can do little more than point at GOP belligerence and give addresses from the White House pulpit warning against the dire economics of default.

Yet, turn the newspaper page (or, more likely, click the next link) and a very different story of executive power is occupying news this morning. The National Security Agency (NSA), the Washington Post revealed today, is collecting millions and millions of email contacts -- yet another dragnet reflecting the hoarding complex of contemporary surveillance, which pays scant regard to privacy protections. This latest NSA revelation was particularly important in terms of executive power. Unlike other major surveillance programs revealed by whistle-blower Edward Snowden's leaks, the contact list collection is not even okayed by the U.S.'s secretive Foreign Intelligence Surveillance Court. The surveillance apparatus is operated outside of U.S. territory, and, as such, as the Post noted, "In this program, the NSA is obliged to make that case only to itself or others in the executive branch. With few exceptions, intelligence operations overseas fall solely within the president’s legal purview." In this instance -- as with drone kill lists -- the president, the executive, appears to sit atop a vast apparatus of knowledge and unchallenged power.

This, then, is the contradiction of the presidency right now: All-powerful and hands tied all at once; dictator and hostage. It's a conflict of sovereignty wherein the executive operates ostensibly with absolute power -- without recourse to Congress -- deciding who lives and dies by drone fire; and enabling -- without even recourse to the shadiest judicial process -- information to be gathered on our every online and telephonic communications. But, at the same time, a jacked-up set of bat-shit crazy ideologues in Congress can shut down the government and push the U.S. into economically disastrous default. The executive and the legislative branches of government sit now not in a relationship of checks-and-balances, but rather a troubling set of coexistent strangleholds and free passes.

As Giorgio Agamben (an Italian philosopher and political theorist who I likely reference too often) has noted, there is nothing new about a conflict of sovereign power. Indeed, the Constitution demands it. As Agamben writes in his essay "State of Exception":

The textual basis of the conflict lies first of all in Article 1 of the constitution, which establishes that "the Privilege of the Writ of Habeas Corpus shall not be suspended, unless when in Cases of Rebellion or Invasion the public Safety may require it" but does not specify which authority has the jurisdiction to decide on the suspension (even though prevailing opinion and the context of the passage itself lead one to assume that the clause is directed at Congress and not the president). The second point of conflict lies in the relation between another passage of Article 1 (which declares that the power to declare war and to raise and support the army and navy rests with Congress) and Article 2, which states that "the President shall be Commander in Chief of the Army and Navy of the United States."

Agamben goes on to point out that, in light of constitutional imprecision over jurisdiction, presidents have historically grounded their sovereign power in claims to emergency or exceptional situations -- specifically, war. As I've noted before when discussing drone kill lists, President Obama stands in a storied pantheon of U.S. presidents grounding dictatorial powers in the necessitations of wartime. Lincoln, after all, authorized the General in Chief of the Army to suspend the writ of habeas corpus whenever he deemed it necessary along the military lines between Washington and Philadelphia, without Congressional approval. "Lincoln in fact acted as an absolute dictator," noted Agamben.

And of course, in this epoque of boundless, unending War on Terror, President Obama has boundless and unending grounds to operate a dictatorial executive -- as we see with drone wars and totalized communications' surveillance in the name of counterterrorism. Interestingly, another glance into not-so-distant presidential history sees exceptional executive powers used to intervene in the economy -- so long as a claim to warlike emergency was available. As Agamben comments, referencing the New Deal, "in 1933, Franklin D. Roosevelt was able to assume extraordinary powers to cope with the Great Depression by presenting his actions as those of a commander during a military campaign."

FDR appealed to Congress, and he was granted essentially limitless domain to regulate the U.S.'s economic life. It's a situation that would not happen today, of course. But it's worth noting too that FDR threatened to override Congress on this issue: "In the event that the Congress shall fail to take [the necessary measures] and in the event that the national emergency is still critical, I shall not evade the clear course of duty that will then confront me," he said. Some argue now that, if Congress fails to reach a deal to raise the debt ceiling, Obama should unilaterally order the Treasury Department to issue new bonds.

I'll add only that any reluctance to do so in the face of market devastation would, at the very least, be hypocritical from a president who has comfortably overseen the normalization of exceptional executive powers in the spheres of extra-judicial killing and surveillance. Crucially, however, this present moment -- in which the president seems at once a dictator and a hostage -- offers important insight to the very structure of U.S. governmentality. There are no happy options here, so take your pick: Absolute dictator, or arms-tied puppet failing to avert economic disaster, or some equally unpleasant combination of conflicted executive power. You'll excuse me for wanting none of it.