"The Everything Store's" big, unanswered question: What happens when the entire economy has been "Amazoned?" 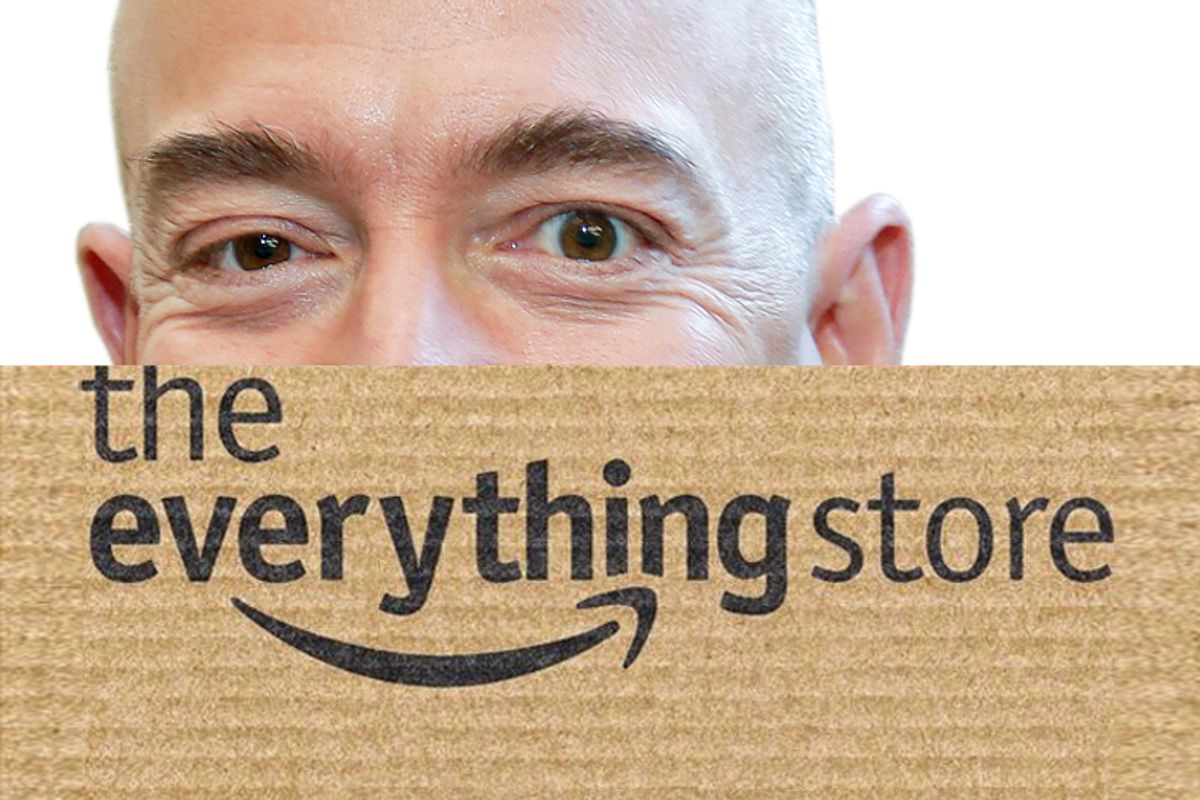 On one thing, both friends and enemies of Jeff Bezos can agree: He is a long-term thinker. This has been true, we learn from Brad Stone’s illuminating new book on Amazon, “The Everything Store: Jeff Bezos and the Age of Amazon,” since at least as far back as high school. In his valedictorian speech the young Bezos discussed “his dream of saving humanity by creating permanent human colonies in orbiting space stations while turning the planet into an enormous nature preserve.”

More recently, while explaining his support for the “Clock of the Long Now” — an epic, gargantuan timepiece expected to last 10,000 years into the future — he told an audience “time horizons matter, they matter a lot… we humans are getting awfully sophisticated in technological ways and have a lot of potential to be very dangerous to ourselves. It seems to me that we, as a species, have to start thinking longer term.”

And then of course there is Amazon, the company Stone describes as “relentlessly innovative and disruptive as well as calculating and ruthless.” A crucial element in Amazon’s success has been Bezos’ willingness to ignore short-term profit-and-loss gyrations while keeping his eye on the big picture. That’s how you build a retail colossus that ends up crushing its competitors while marching to world domination in a bewildering profusion of markets. That’s how you become the 12th richest man in America.

In a country where so many economic and political problems can be traced to short-term thinking, to self-defeating obsessions with quarterly earnings reports and 24-hour news cycles, Jeff Bezos’ willingness to think big and remain steadfast is refreshing and worth applauding (especially if you are a Washington Post employee.) But it invites a huge question, one that is not sufficiently addressed in “The Everything Store.” What is the long-term impact of Amazon on us? Where does the monomaniacal focus on delivering low-priced goods to consumers as quickly and easily as possible lead society in the long run?Because Bezos is absolutely right: Our technological sophistication has given us “a lot of potential to be very dangerous to ourselves.” What he fails to mention is the possibility that Amazon itself is part of that threat.

Amazon is the perfect narrative vehicle for exploring how the revolutionary changes ushered in by the Internet have remade our world. As Stone reminds us, from the very first moment any of us pointed and clicked our way to an online book purchase in the 1990s, Amazon embodied the utopian, irresistibly seductive promise of the new digital world more adroitly than any other Internet pioneer. We could get any book we wanted, without ever leaving our couch! Science-fiction nirvana!

Stone makes an excellent case that no single person got the essential promise of the Internet earlier and was able to turn it into a commercial proposition more effectively than Bezos. He is, without a doubt, one hell of a smart guy. He’s also bold and ruthless and impatient: all qualities that have served Amazon well.

But the Internet sci-fi transformation doesn’t just stop with the FedEx or UPS package miraculously arriving at the front door. Like Walmart, a company that Stone constantly compares Amazon with, “the everything store” is so big and so successful that it has changed the contours of our economy, remade entire industries, hammered the “mom-and-pop store” ecology into smithereens, and replaced, in countless cases, actual personal connection with the crafty persuasiveness of an all-knowing algorithm.

What does that mean for local economies, for the “creative class” or the middle class? The answers to these questions are totally unclear, which is all the more reason why a book about Amazon should plunge into them.

Amazon’s history is the perfect launching pad for tracing how technological innovation is encroaching on territory once owned by humans. Stone reminds us that at one point Amazon actually had an editorial team that would personally craft book recommendations to be featured on the home page. But as Amazon became more proficient at exploiting the data it was gathering about user preferences and behavior, the added value provided by real living breathing humans came under existential threat from the automated “personalization” “P13N” team.

The fight was brutal, but the end was preordained. The algorithmic power of automatically personalized recommendations boosted sales more quickly than the plodding touch of corporeal bodies.

[O]ver time it became clear that humans couldn’t compete. PEOPLE FORGET THAT JOHN HENRY DIED IN THE END, read a sign on wall of the P13N office.”

Well no, actually. We all remember that John Henry died. Or at least we should. This epic coming-to-terms moment with the fact that machines boosted productivity beyond anything blood and bones could mobilize is a defining parable for the human wreckage left in the wake of technological innovation, for the price we pay for progress. Amazon represents the latest chapter in that narrative; it is the 21st century equivalent of the steam engine, running roughshod over all who stand in the way.

So who plays the part of John Henry? The independent bookstore? Circuit City? Random House? Dare we even suggest… the mighty Walmart? Middle-class jobs?

Brad Stone observes that “to be Amazoned” means “to watch helplessly as the online upstart from Seattle vacuums up the customers and profits of your traditional brick-and-mortar business.” But it goes further than that. To be Amazoned also means to be replaced by the algorithm, to have friction eradicated from the consumer transaction experience, to be automated right out of a job. The jury is still out on what the answer is to the question: What does an entire economy look like that has been “Amazoned”?

Let’s hope it doesn’t look like the internal employment culture of Amazon itself. Because if there’s one other thing that comes through, loud and clear, from “The Everything Store,” it’s that Jeff Bezos did not create a warm and nurturing place to work. Bezos is a tough and overbearing boss prone to “nutter” outbursts who demands long hours and doesn’t spare any compassion for those who value, say, time with their familes. In job interviews the slightest mention of desiring home-work balance was an immediate disqualifier. Those who thrived at Amazon embraced confrontation and conflict; those who didn’t left the company quickly.

Nasty bosses and insanely competitive workplaces are by no means exceptional in the technology industry. As Bezos explains, what Amazon was trying to do was hard. Staying ahead of the Internet curve required constant, unflagging effort. One could easily argue that building a successful company in such an environment required harsh working conditions. But in that respect too, Amazon is a useful metaphor for the society-wide workplace transformations that have accompanied recent technological innovation and its close cousin, globalization. Everybody seems to be working harder — the profit margins have been squeezed in industry after industry. We’re all competing against global labor forces and smart algorithms and the kind of robots that Amazon ultimately plans to install in all of its “fulfillment centers” so as to avoid the messy imperfections wrought by its current 12-dollar-an-hour warehouse workers. If computer technology is, as has been suggested, a factor in job polarization and the disappearance of middle-class jobs, then Amazon is one of the most obvious and lethal vectors for that virus.

In his introduction, Stone writes that Bezos himself thinks it is premature to try to judge Amazon’s place in history. He’s right about that. The questions raised by Amazon’s success are open. It may well be that a single-minded fixation on delivering low prices and convenience — the Walmart and Amazon way — delivers so much benefit to consumers that all of society is better off as a result. When I think back on just the last few months and consider my Amazon purchases — a phone charger, an external hard-drive on my computer, a blender, a book on government manufacturing policy that would not conceivably be available at any local brick-and-mortar outlet — I know that I have saved both time and money while boosting Jeff Bezos’ bottom line. And I don’t want to go back to the way that things were before. Multiply by that a billion or two and we should be able to measure meaningful economy-wide productivity gains.

But I don’t yet know what Amazon means for the long-term future of the publishing industry or for the ability of authors to make a decent living or for the brick-and-mortar retail sector that still accounts for so many jobs. When we’re all buying our groceries and our jewelry and our books and our clothes and our electronics from an Amazon that fulfills our needs near instantly via robot workers, what’s left? Where does it all end?

I doubt even Bezos knows, so Brad Stone can be excused for not delivering his own answer. But I’d like a book called “The Everything Store” to push a little harder on posing the question.