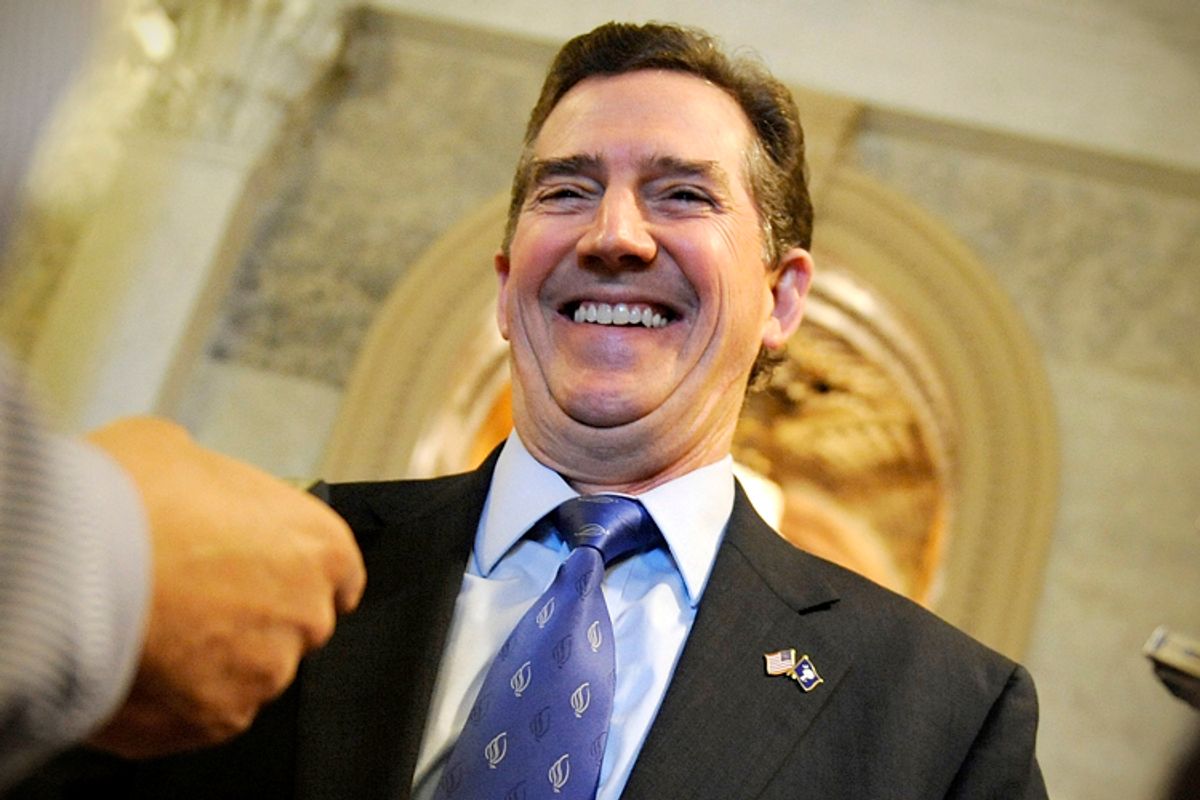 The Speaker of the House had spent all of Tuesday stitching together a bill to fund the government, raise the debt ceiling and strip Congressional staffers of their health insurance subsidies. It was supposed to be a bill to prove that the House GOP would not go down without a fight. That it would not be a rubber stamp. That it would be giving and never receiving orders — not from Harry Reid, not from the liberal media, and certainly not from the president. Boehner’s bill, in short, was supposed to be a display of his resolve, his principle, his pride.

Yet all it took was one pronouncement from one head of Jim DeMint’s conservative hydra and — poof! — 25 minutes later, the vote was canceled; the bill was gone.

The pronouncement in question came from the website of Heritage Action, the PAC appendage of the Heritage Foundation, where Jim DeMint is president and the right-wing grass-roots is king. Unlike the Heritage Foundation, which is a 501(c)(3) nonprofit organization, Heritage Action can lobby for or against legislation, or not-so-subtly promote one candidate ahead of another in the weeks leading up to primary election day. Like the Senate Conservatives Fund before it, a super PAC DeMint helped create when he was still a senator, Heritage Action serves as DeMint’s legislative cudgel, threatening a grass-roots war against any Republican who doesn’t vote his chosen way.

And yesterday, DeMint’s chosen way was against John Boehner. Labeling the vote a “key vote,” meaning that it would be included on every House Republican’s “legislative scorecard,” Heritage Action strongly came out in opposition to Boehner’s bill. Its problem? “[T]he proposed deal will do nothing to stop Obamacare’s massive new entitlements from taking root,” said the Heritage PAC. It was nothing more than “another Washington-style punt.” It would not save Americans from the Obamacare menace.

According to Jonathan Strong of National Review, Heritage Action’s ruling was more than enough to sink Boehner’s proposal, which soon became DOA. “A key moment in the fight came when Heritage Action announced it was ‘key voting’ against the bill,” Strong reported yesterday. “Support was already flagging, and the decision made up the minds of many members sitting on the fence.” One Republican chief of staff put it to Strong in refreshingly honest terms: “People are thinking about primaries, they really are."

While Heritage’s release was indeed a crippling blow to Boehner’s plan, it shouldn’t have come as a surprise. As DeMint made abundantly clear in a recent Bloomberg Businessweek cover story — in which the former senator comes off as utopian, delusional, ruthless and disarmingly serene — his goal, and thus the goal of the institutional organs he controls and the hardcore activist base he leads, is the defunding (or at least the delay) of Obamacare itself. And Boehner’s bill didn’t do that. It didn’t even come close.

Boehner was operating under the gun. The debt ceiling hits on Thursday, after all. But Jim DeMint doesn’t view politics in such a day-to-day manner. And judging from the pronouncements of other grass-roots conservatives like RedState’s Erick Erickson, his side doesn’t care much about the debt ceiling, anyway. (Erickson has repeatedly urged Republicans to lift the debt ceiling while continuing to fight for an Obamacare-defunding continuing resolution.) DeMint’s goals are much more grandiose than Boehner’s; he’s trying to remake the Republican Party in his image — he's not merely living to fight another day.

Returning to that Bloomberg Businessweek piece, what’s most striking about DeMint is his boundless optimism. He’s not only utterly convinced that there’s a silent majority of conservatives dotting the American landscape, but he also believes that Republicans’ failures in 2008 and 2012 were the product of the party not being conservative enough. “Because of Romney and Romneycare, we did not litigate the Obamacare issue,” DeMint has said, painting a picture of the most recent presidential campaign that most would find hard to reconcile with their memory.

Then again, there's a lot about the way Jim DeMint sees the world that would strike many as odd. He's not so sure gay people or sexually active unmarried women should be allowed to teach. He's convinced that the Republican Party can win on cutting social insurance programs like Medicare and Social Security. He thinks Obama is turning the U.S. into a country of "national socialism." His chosen method of political persuasion is to inflict "pain."

For most folks outside of the GOP base, this is a bizarre and unfortunate combination of right-wing libertarianism and an authoritarian spirit. But Jim DeMint doesn't operate among folks outside of the GOP base. He's one of them — and they are his. And for the time being, at least, they've given him enough power to thwart a Republican Speaker of the House with little more than a "key vote," a "legislative scorecard," and a burning will to power.