How race affects who audiences forgive 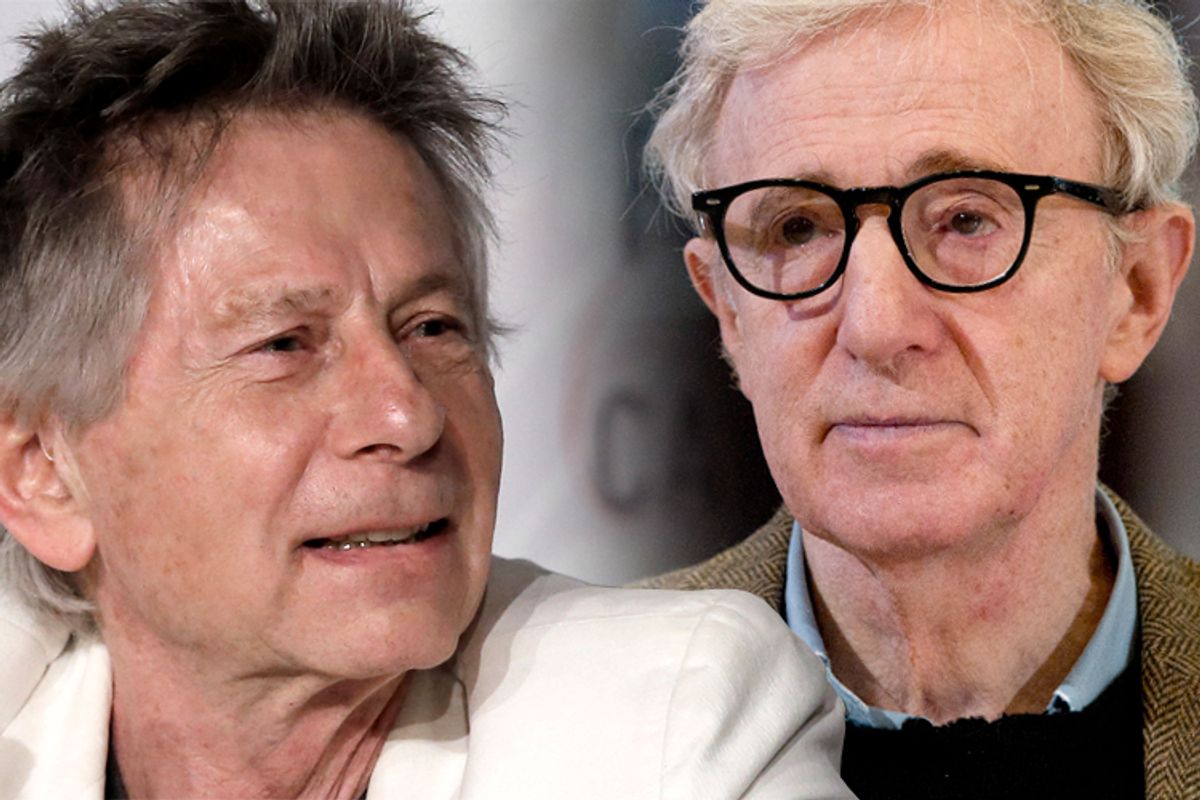 When we think about forgiveness, we tend to think of the people who have wronged us personally. But forgiveness can also take place on a more public scale, and this kind of forgiveness raises certain questions: What does it take for us to forgive celebrities who do wrong? And how do race and gender influence who we forgive?

Woody Allen, Roman Polanski, R. Kelly, and Chris Brown have all come under fire for alleged (or confirmed) abuse or mistreatment of women. In 1992, news surfaced of acclaimed writer and director Woody Allen's romantic relationship with his adopted step-daughter Soon-Yi. And in 1997, despite ex-wife Mia Farrow’s accusations that he abused her other daughter, Dylan, he unapologetically married Soon-Yi. The couple went on to have two daughters. In 1977, Roman Polanski, celebrated movie screenplay writer and director, drugged and raped a 13- year-old girl in Jack Nicholson’s jacuzzi. He spent 42 days in jail awaiting a psychiatric evaluation and, fearing a longer imprisonment, flew to Europe and has not returned to the United States since. Polanski also had an “affair” with 15-year-old Nastassja Kinski and wrote openly about seducing teenage girls in his memoir.

Robert Sylvester Kelly, better known as R&B music sensation R. Kelly, was charged with 14 counts of child pornography for videotaping himself having sex with a 13-year-old girl. A key witness at his trial said that she engaged in threesomes with him and the young girl when she was only 17 years old herself. Kelly was acquitted on all charges, because the jury couldn’t conclusively identify the girl in the video. R. Kelly also illegally married R&B singer Aaliyah when he was 27 and she was only 15 years old. In 2009, pop star Chris Brown violently assaulted his on-again-off-again girlfriend, pop star Rihanna, in a vehicle. After the beating, gruesome pictures of her face surfaced on the Internet. Rihanna reported that it wasn’t the first time Brown had hit her, though this particular assault might have been the worst. Brown went on to spend 52 weeks in domestic violence and anger management counseling and told Matt Lauer that he had finally learned hitting women is wrong and would never do it again.

Each of these scandals elicited a wide range of responses, with complete shock being the most common. The newspapers were filled with everything from trial updates to op-ed pieces weighing in on whether the men were monsters or undeserving victims of public outrage. And in each case, the race of the alleged perpetrator affected how the media and the public treated him.

Allen was sometimes portrayed as an awkward, sad old man who appeared to not be fully conscious of the wrongness of his behavior. Some people made excuses, saying that Soon-Yi wasn’t his blood relative and was only his “daughter” by marriage and adoption. Others cited images of him and Soon-Yi being at basketball games when she was a young girl as proof that they did have a father-daughter relationship. Farrow’s allegations of abuse of daughter Dylan made Americans wonder what was going on in Allen's home, but not enough to avoid seeing his movies. In fact, quite a few people argued that his “love life” was personal and had no impact on their enjoyment of his work.

Polanski, who received a standing ovation for his Oscar win, got a similar reaction. Many have separated his art from his life, despite his admission that he once preferred teenaged girls as lovers. Even more interesting? The young woman he drugged and raped, Samantha Geimer, has called for “justice” for Polanski and feels he was treated unfairly. In her book about the incident, she writes that she believes he should be allowed to return to the U.S. with all charges dropped. They even email each other, and Geimer says that while she believes what he did was wrong, “1977 was a different time.”

The responses to R. Kelly and Chris Brown were more volatile. Among African Americans, there was a split: some saw Kelly as a disgusting child molester and some said he was “set up” by a “fast” girl who knew what she was doing. Radio personality and talk show host Wendy Williams went on an emotional rant against him, and many agreed with her. But surprisingly enough, more women seemed to blame the young women and their mothers for their involvement with him. I admit I was stunned into disbelief when I read or heard opinions that Kelly was a musical genius who simply got caught up with a young girl who should have known not to mess with an adult man. White audiences seemed to have less to say about Kelly’s trial, perhaps in large part because he did not quite cross over to global pop appeal the way artists like Michael Jackson or Prince have.

Chris Brown, on the other hand, came under huge fire from feminist communities and was demonized as a brutal abuser. There was quite a bit of pushback, though, from African Americans who, I believe, resented “outsiders” commenting on one of their own men. “How long will he be punished?” and “What does he have to do to be forgiven?” were common questions that circulated, particularly on social media, despite Brown’s later outbursts on television and a hit-and-run incident for which his probation was revoked. Too many people blamed Rihanna for staying with him after earlier incidents of violence and for later appearing with him in public and on Instagram. White feminists attacked Brown furiously, with good cause, and those within African American forums who joined in the attacks were often chastised for speaking against him. Discussions of domestic violence within African American communities can be muted at times, particularly when women speak out about being victims of attacks by black men. Women can sometimes be demonized as trying to bring the men down and not being supportive of “flawed” men.

Whether or not any of these men’s careers suffered from these scandals is up for debate. Roman Polanski went on to two Academy Award nominations, and won the award for Best Director in 2002 for "The Pianist." His movies have since earned more than $337 million worldwide. Since 2002, Woody Allen has directed 12 movies, been nominated for two Academy Awards, and won the Award for Best Original Screenplay in 2011 for "Midnight in Paris." His movies have earned more than $628 million worldwide during that time. Since the 1999 incident, R. Kelly has released eight albums, six of which went platinum or higher. While Chris Brown’s sales may have slowed a bit in the U.S. (as all music sales have in the digital distribution age), he still managed to have one multiplatinum album and one gold album, and various singles went gold and platinum around the world -- all since the 2009 incident. He's also had no shortage of public appearances, particularly at musical award shows geared towards African American audiences.

Though all four artists have seen success, their histories have inspired very different reactions from white and black audiences. Polanski's scandal took place before many of us who are tuned into popular culture were alive, so many of us are out of touch with the impact it had on Hollywood. In an interview, actress Kim Cattrall spoke about separating art from "personal problems," not drawing conclusions, questioning the judgment of the judge in the case, and saying, like Geimer, that the times were different. In 2009, Allen and Martin Scorsese were among the nearly 140 people who signed a petition to "Free Roman Polanski," and even Whoopi Goldberg said his assault on Geimer wasn't "rape-rape." While people initially took issue with Allen marrying his step-daughter, his relationship with her seems to have been all but forgotten.

Brown's name, however, evokes intense, visceral reactions from white audiences. He's been made almost a poster boy for the violence and misogyny in hip-hop culture (even though he is not a hip-hop artist). When his name comes up in the news, it inevitably sets off another round of blogs and articles about violent young black men. However similar their actions may have been, white artists seem to get a pass from white audiences in a way black artists don't.

It's also worth noting that all of these scandals involved violence or abuse committed against women and girls. Perhaps that is part of why the reactions vary so much. When it comes to domestic violence, women are often blamed for their experiences. When it comes to sexual abuse, women are questioned about how they may have contributed to it.

Race may have influenced the media narratives around Allen, Kelly, Polanski and Brown, but all have faced few repercussions, mainly because they are celebrities. The message this sends is that the abuses they're accused of are mere character flaws rather than horrifying acts of violation against other people. None of these men need my forgiveness, however, and my feelings won't have any effect on whether they change or reflect on what they've done. All I can do is make my small voice heard with how I choose to spend (or keep) my money.