"Kill Your Darlings": From Hogwarts to "Howl" 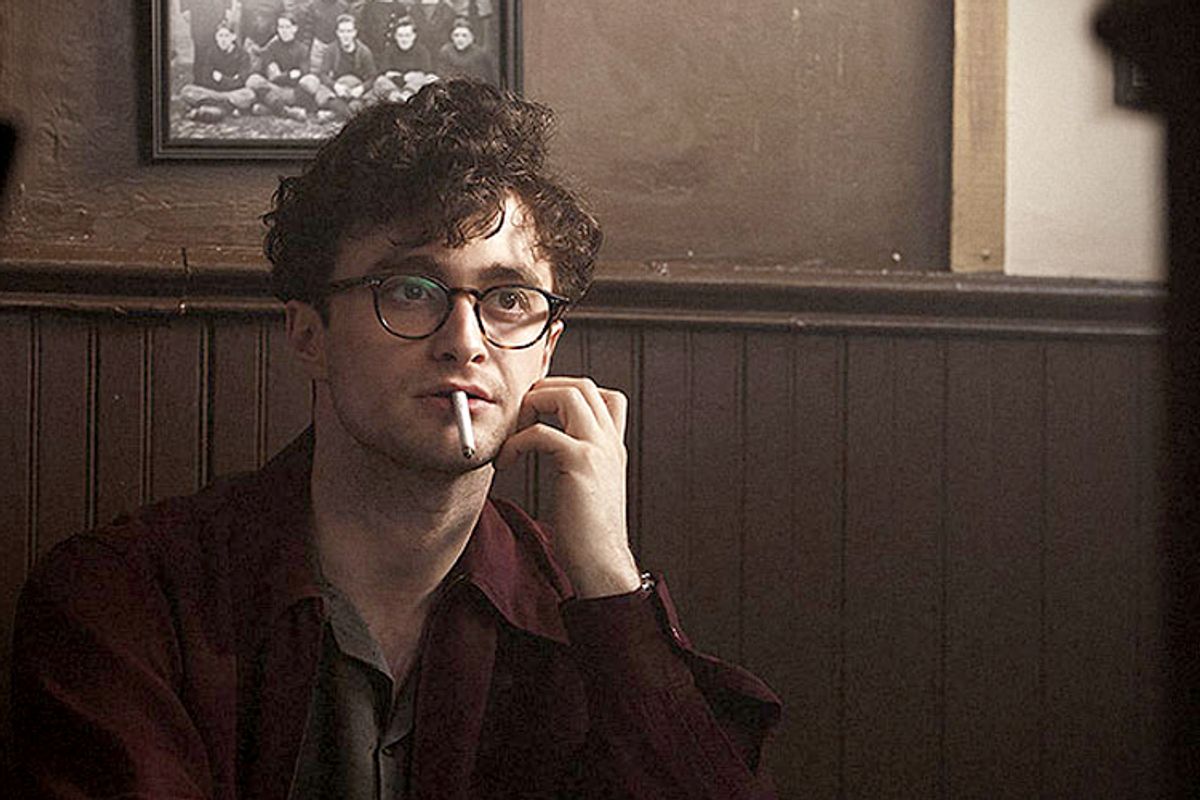 People keep making movies about the literary and cultural revolution of the Beat movement, without the slightest evidence that the world is interested. Is playing awkward motormouth genius Allen Ginsberg, Walt Whitman’s spiritual grandson and arguably the most important American poet of the 20th century, the new marker of actorly seriousness? James Franco did it a few years ago in the little-seen “Howl,” and now Daniel Radcliffe – apparently well known to the public for some sort of fantasy-adventure series – plays the even younger Ginsberg as a Columbia undergrad, exploring poetry, drugs and sexuality in John Krokidas’ energetic debut feature, “Kill Your Darlings.”

“Kill Your Darlings” goes back to the prehistory of the Beats, telling the gripping and troubling story of a murder that could be seen as poisoning the movement at its root, or as exposing the contradictions of life in mid-century America, scandalized and fascinated by the specter of homosexuality. Whether or not this film will draw viewers, beyond those who want to see the former Harry Potter play a Jewish kid from New Jersey (in highly convincing fashion) and lose his virginity to a sailor, I don’t know. I kind of see the problem from both sides: To 21st-century audiences, the long-ago ravings of a gaggle of drugged-out mid-century college dropouts may seem overly earnest, overly familiar and not all that relevant. Yet viewed in correct historical perspective, the rebellion against postwar American conformity led by Ginsberg, Jack Kerouac, William Burroughs and their friends looks more important, rather than less, with the passage of time.

Not only were the Beats the advance guard of the 1960s, the punk movement and the LGBTQ liberation struggle, but the style, posture and attitude they embodied – subtly adapted to the economy of commodity capitalism – would become, perversely enough, the dominant mode of self-representation in our culture. As the Situationists, Slavoj Zizek and Thomas Frank have all noticed, the pose of nonconformity and anti-authoritarianism has itself become a commodity, as well as a marker of tribal identity. This is by no means limited to the so-called hipster culture of big cities and college towns – basically now nothing more than an ill-defined subset of consumerism -- although there the Beat heritage is glaringly obvious.

Every tattooed millionaire athlete, music impresario and bad-boy movie star must be a nonconformist, a reckless and defiant individual who is also, simultaneously and miraculously, a representation of our collective consumerist desire. Ted Cruz may not think he has much in common with Kerouac and Ginsberg, but in perverse fashion he’s a genuine nonconformist, representing an incoherent white-right constituency, which sees itself as victimized and marginalized, by deliberately alienating and scandalizing the forces of normalcy. Sure, at this point Cruz has overplayed his hand and torched his own political future, but that’s only relevant if we assume he had normal political goals in the first place. To his followers he’ll be the ultimate badass forever, and maybe he just wanted to destroy conventional politics the way we see Ginsberg and his friends, in the film, ripping up works of classic literature stolen from the Columbia library. (Furthermore, if he ever reads this he’ll be flattered by the comparison.)

One could argue that “Kill Your Darlings” could use a bit more unpredictable or hostile Ted Cruz energy, some sense of the threat the young Beats (who didn’t call themselves that until the ’50s) posed to the social order. We first meet Lucien Carr (Dane DeHaan, best known for TV roles in “In Treatment” and “True Blood") in that library, springing up on a table to declaim an erotic Henry Miller poem to incoming freshmen, circa 1943. It’s a bit too much like a sitcom moment of rebellion, depending on the idea that Ivy League stuffed shirts will be shocked by the word “cock.” But despite its unsure moments, “Kill Your Darlings” has considerable advantages over both Rob Epstein and Jeffrey Friedman’s “Howl” and Walter Salles’ ambitious, hit-and-miss adaptation of Kerouac’s iconic “On the Road,” which featured Sam Riley and Kristen Stewart. For one thing, it actually has a plot, a crisp, compact (and mostly true) narrative that unfolds during the latter years of World War II, when Ginsberg first came to New York and met Lucien Carr.

It was Carr who became Ginsberg’s first serious same-sex crush, although Carr always maintained he was heterosexual and they may never have slept together. And it was Carr who introduced Ginsberg both to Burroughs (Ben Foster), who dressed like a Midwestern banker while pursuing every known form of degeneracy, and to Kerouac (Jack Huston), the seaman and football hero who claimed to have already written more than a million words. (Or at least typed them, as Truman Capote would later quip.) But those two soon-to-be-famous writers are background characters here – in Foster’s case, overly shticky ones – and the focus is on the romantic, erotic and intellectual triangle involving the raw and naïve Ginsberg, who is not yet sure whether he’s gay or a writer or anything in particular, Carr and an older man named David Kammerer.

As played by Michael C. Hall, Kammerer is an erudite, bearded neurotic whose ambiguous relationship with Carr inhabits the border zone between “guardian angel,” jilted lover and nutso stalker. I feel as if I shouldn’t explain exactly what happens, but then again the real story is a crucial aspect of Beat history that has been retold and re-examined many times over the last 60 years. Suffice it to say that this unstable situation went badly wrong, leading to Kammerer’s death after an ambiguous encounter with Carr in Riverside Park, along with an ensuing court case that captivated the New York tabloids. Krokidas and co-writer Austin Bunn do not try to solve that 1944 mystery but instead spin an engrossing moral fable about how a group of high-spirited college kids who yearned to change the world became enmeshed with a gruesome and hateful crime.

Unlike most college kids who vow to change the world, these guys actually did, and that aspect of the story remains in the future tense in “Kill Your Darlings.” I suppose Krokidas’ argument is that the Kammerer killing was a crucial milestone on the road that led the uncertain and insecure undergraduate Allen Ginsberg – played by Radcliffe with a bursting, irresistible energy and fully convincing American mannerisms -- to become the author of “Howl” a few years later and the first avatar of gay pride. (It also galvanized Kerouac and Burroughs, who co-wrote a novel about the murder that sat unpublished for decades.) Ginsberg dedicated that first edition of “Howl” to Lucien Carr, who dropped out of literary circles after Kammerer’s death but remained friends with Ginsberg and Kerouac for the rest of their lives. That seeming contradiction – the greatest of all gay-themed poems, dedicated to a man who committed a homophobic killing – takes on a new clarity in this brash, bristling, highly watchable film.