Some of this season's best performances are by guys over 50: Michael J. Fox, Ray Romano and Robin Williams 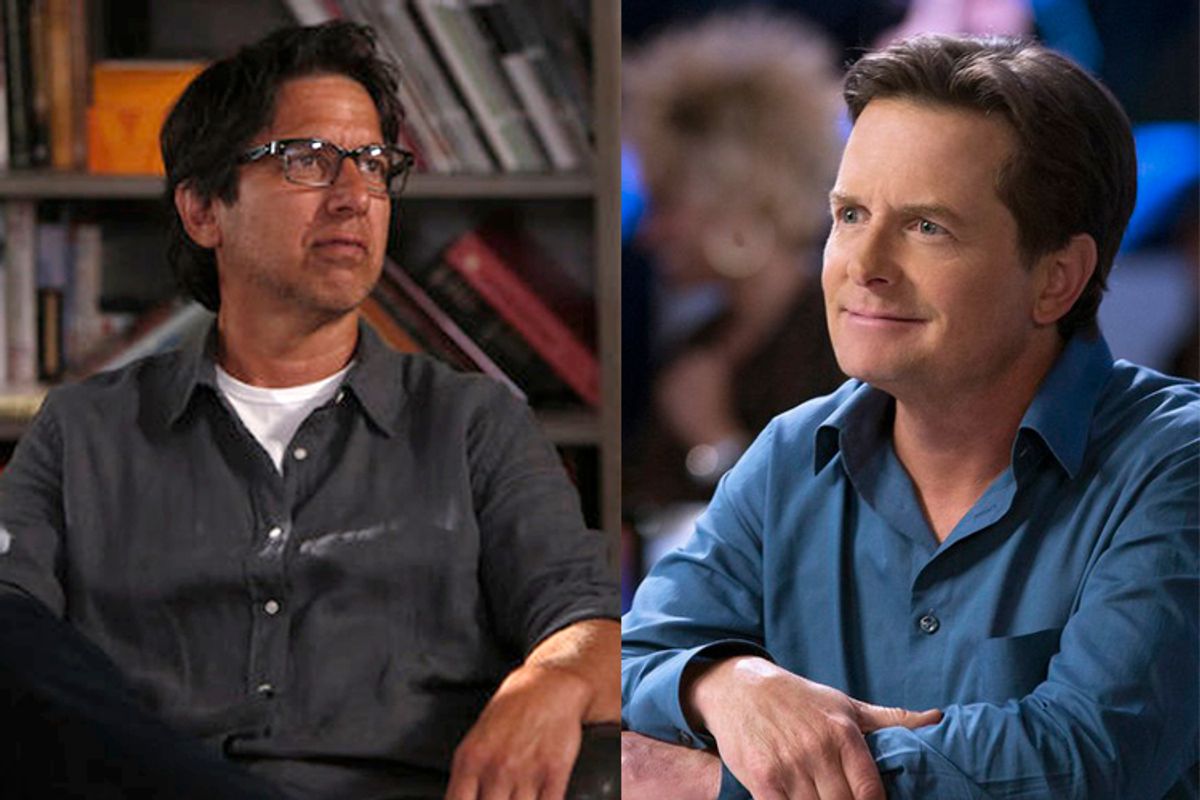 There's a great scene in the most recent episode of "Parenthood" where the character of Sarah Braverman looks lovingly into her curmudgeonly ex's eyes and asks if he takes her seriously. Hank Rizzoli hesitates and Sarah jumps down his throat, surmising his true feelings: "You paused. The pause says it all." He responds defensively: "I pause on everything." In that moment I was reminded that I was not just watching the character Hank the grumpy photographer, but also Ray Romano, a world-class comedian and one of television's most successful stars. Usually, I'd think of it as a bad thing to be taken out of the narrative by anything so meta. But, here, I had to smile at Romano referencing his signature, halting delivery.

Several TV veterans are returning to primetime this season with vehicles of their own or as members of ensemble casts. Along with Romano (55) -- who extends his role on "Parenthood" after it appeared his character had been written off last season -- Michael J. Fox (52) and Robin Williams (62) are easily among the most seasoned and recognizable. With them, the three bring not only years of experience and technique, but also a long history with audiences of all kinds.

"Everybody Loves Raymond" ran from 1996 to 2005, won numerous Emmys, and seared Ray Romano's awkward baritone into the minds of countless TV viewers. "Family Ties" ran from 1982 to 1989 and was a staple of NBC's legendary sitcom heyday. Star Michael J. Fox's film career quickly eclipsed the show's popularity, but it's safe to say that audiences first fell in love with the boyish actor and his pitch-shifting voice as parent-confounding Republican teen Alex P. Keaton. "Mork and Mindy" first aired in 1978 and ended as "Ties" began. It introduced the world to Robin Williams' fast-paced, manic style and laid the groundwork for his massive movie stardom.

Williams' new show, "The Crazy Ones," hasn't quite found its footing. (In fact, I figured it best to cover it first in this post for fear the cancel hammer comes down mid-paragraph.) The ensemble cast comes across a little too cutesy. The fraught father/daughter, mentor/protege dynamic, a little too forced. But the show succeeds where I thought it was most likely to fail -- by letting Robin Williams off the leash. It seems like Williams hasn't stopped riffing since Mork got to Earth. The actor has demonstrated all sorts of versatility in his various movie roles, some restrained, some surprisingly subtle. But when you see him on talk shows and during public appearances he always seems to be improvising at a frequency even pets can't hear. I even cringed a bit during his Jonathan Winters tribute at this year's Emmy Awards.

"The Crazy Ones" takes on the challenge of harnessing rather than suppressing that unpredictable Robin Williams energy and does so fairly admirably. I give credit to the show's creators for positioning Williams' Simon Roberts at the center of a busy ad agency, a location where ceaseless spitballing is acceptable. Williams is also surrounded by game co-stars off of whom to bounce his scattershot humor. Acoustic guitars and back-up singers appear out of nowhere when Simon Roberts gets on a roll. In such a nurturing environment, it's hard not to find joy in the familiar rhythms of Williams' seemingly wild but well-honed ramblings, the way he shifts pitch and speed effortlessly, the way he seems to follow a thread to a workable punchline or just explode the whole whimsical train of thought in a flurry of homemade sound effects.

Michael J. Fox possesses such a signature sound, if not fury, as well. And the involuntary movements caused by his Parkinson's modify, but do not greatly alter the effect of that familiar, mildly irascible squeak. Fortunately, "The Michael J. Fox Show" is not simply about the actor we know and love with all his oft-reported obstacles and public triumphs. Rather, the show focuses on fictional network news correspondent and put-upon parent Michael Henry. Maybe it was his disability that kept him from television for so long, but I find it most fitting that Fox returns full-time at an age when he can play a dad as blindly frustrated by his family as liberal parents Elyse and Steven Keaton were by their own buttoned-up kid. Call it cosmic television karma -- or just demographic research and smart programming.

Unlike Williams and Fox, Ray Romano is not the center of the show on which he appears. "Parenthood" started without him, and there is no telling how long his story arc will last. As a bit player, however, he is wonderful. His scenes on the endearing family drama are often quiet and secluded from the majority of the action, with Romano usually playing off of only one other actor. It's appropriate in that the sad-sack comic actor's pace has slowed and his tone has deepened since the days when flustered Ray Barone traded barbs with his peeved wife and mother on "Everybody Loves Raymond."

Compared to Williams and Fox, Romano is the least like I remember him -- although that probably has a lot to do with the fact that I did not watch the short-lived program "Men of a Certain Age," which treated fans to a grayer, gloomier Romano -- and there's nothing wrong with that. As much as I love being reminded of the person I feel like I've known forever, I'm also happy to see him taking his time.