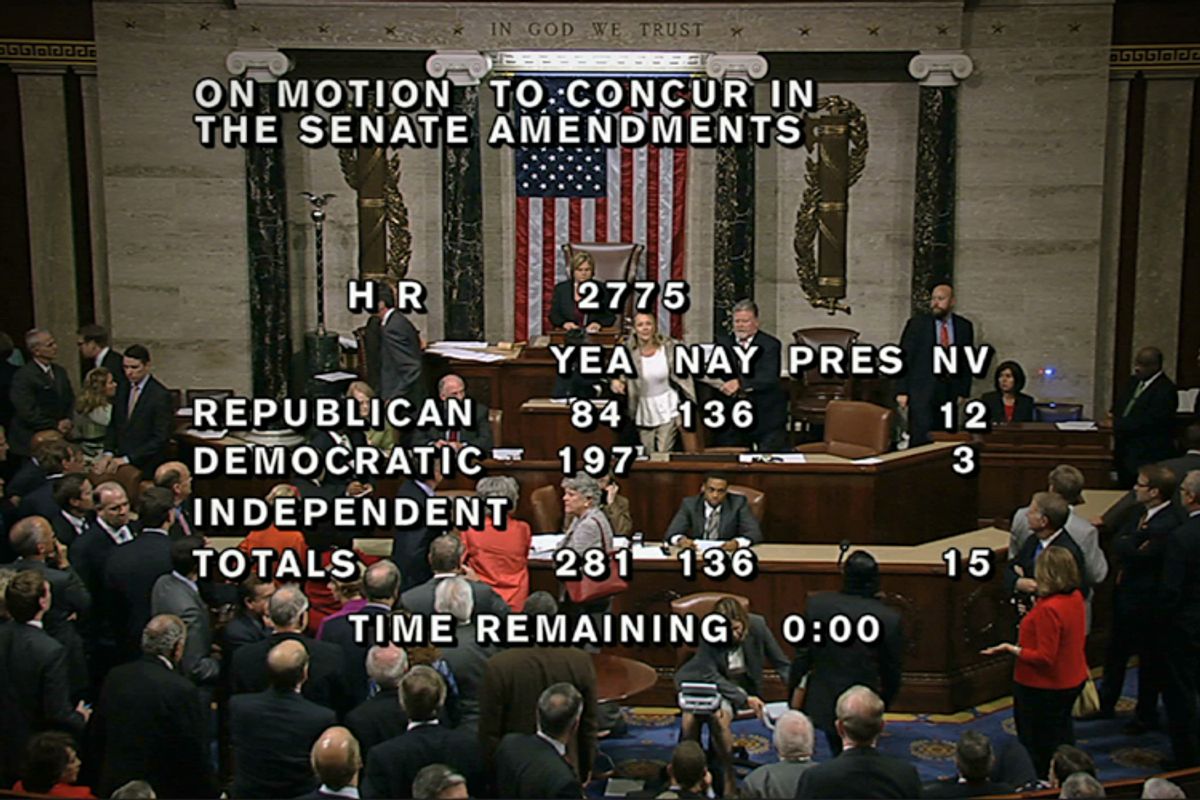 Diane Reidy, seen between the "yea" and "nay" wording, is removed from the House chamber after she began shouting during the vote to end the government shutdown. (AP/House TV)
--

Out of control people being out of control in the Congress? What's new about that? Hasn't that been the story of the past few weeks of America? But when House stenographer Dianne Reidy ran amok during Wednesday night’s vote to end the shutdown, her outburst was impressive even by Beltway standards.

Capitol Police then interviewed her, and she was taken to a local hospital for evaluation. What in the hell happened here? CNN's Dana Bash reported soon after speaking with Reidy's colleagues, stating that the consensus was that "She’s a well-known person, she’s a perfectly nice person, a good colleague, somebody who’s respectable and dependable, and this is very surprising to everybody who works with her." Democratic Rep. Gerry Connolly, meanwhile, told the Washington Post that Reidy is "well-known and liked," adding, "I think there’s a lot of sympathy, because something clearly happened there." And a GOP aide later said simply, "I don't know, she just snapped."

It was a surreal end to what will go down as a surreal episode in American history, and a somehow fitting one. On a literal level, it's the story of a woman who, for reasons still unknown, lost it in a very public way. But as a metaphor, oh boy. Grabbing the place reserved for the president, briefly holding the room hostage and spewing incoherent, paranoid and heavily Christianity-inflected nonsense? Gee, where have we seen this before?

Reidy's rant was a lot shorter than Ted Cruz's recent epic speech on the Senate floor, but Cruz gets points for including a "Green Eggs and Ham" tangent in his. And unlike Cruz, Reidy has apparently yet to publicly express the paranoid fear that she'll "wake up amidst the Syrian rebels." Reidy references the Freemasons, but is that really any crazier than Michele Bachmann's  assertion that we're living in End Times, and that American taxpayers are "now paying to give arms to terrorists including al-Qaida"? Is Reidy's furious anger any less bizarre than Rep. David Schweikert's chillingly chipper assertion that the government shutdown is "my idea of fun"? And you think Reidy sounded unquestionably off? Not everyone agrees. On Thursday morning, "Fox and Friends" devoted airtime to reading letters from viewers who speculate Reidy was bringing "a message from God," while Elisabeth Hasselbeck wondered if "who knows, maybe she just saw something that didn’t seem right."

Last month, Paul Krugman defined the current Republican leadership as "the crazy party."  Earlier this month, Robert Reich called the Republican approach to the debt ceiling "crazy talk."  If Dianne Reidy struck a chord, it's not just because she did something wild and out of turn. It's because standing there Wednesday night in her crisp pantsuit and her bizarre rhetoric, she didn't seem so different from a whole lot of what we've been looking at the last few weeks -- at least not until she was carted out of the House. And unlike many other individuals in the room, she fortunately doesn't possess the power to bring the government to a standstill and the economy to its knees. Reidy is today allegedly getting medical attention for her unhinged outburst. If only we could do the same for a few more of the individuals in that Washington chamber Wednesday.