Pick of the week: From freedom to slavery and back

Pick of the week: Chiwetel Ejiofor and Michael Fassbender are electric in a harrowing true-life slave narrative 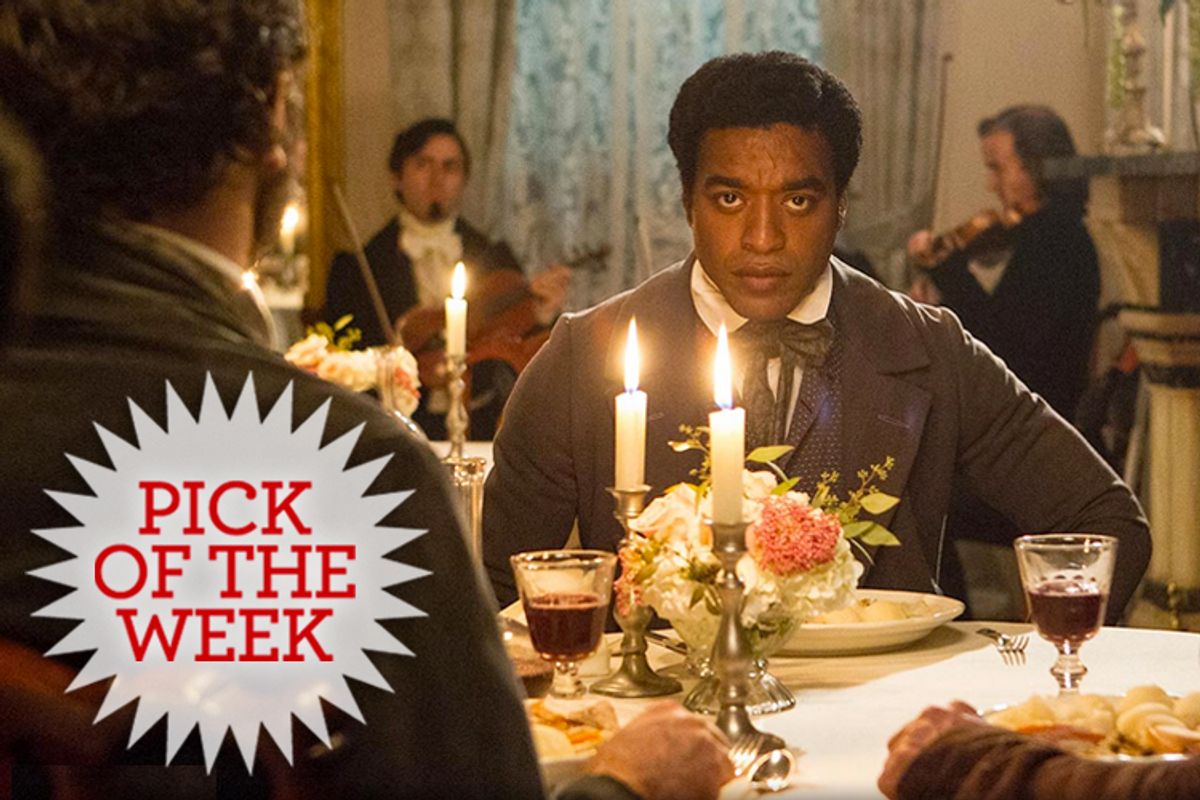 I’m not sure what it tells us that “12 Years a Slave,” which is both a harrowing and realistic journey into the forbidden zone of American history and a perverse allegorical fable about the human body under capitalism and the illusion of freedom, was made by a bunch of foreigners. Maybe not that much – filmmaking, like slavery, is a global enterprise – but I guarantee you that someone, somewhere, is working on a blog post (or 20) about how this movie is a sinister Commie campaign to undermine the greatness of America. We’re already seeing the kinds of Internet comments that reflect widespread unease with the subject matter: Jeez, enough negative “black movies,” already; what’s with all the angry race-baiting; can’t we move on to the 21st century and its world of bland, post-racial clichés, and so on.

Still, it’s striking that the most direct confrontation with the crushing brutality of American slavery ever seen in mainstream cinema was directed by Steve McQueen (born in London, of West Indian ancestry), who previously made "Shame" and "Hunger," and stars Chiwetel Ejiofor (also born in London, of Nigerian ancestry). Its most important white roles belongs to the German-born Irish actor Michael Fassbender, McQueen's longtime collaborator, and rising English star Benedict Cumberbatch (also seen this week playing Julian Assange in "The Fifth Estate"). It may be that Americans of all races are still reluctant to confront this brooding historical specter that continues to haunt us, or want to engage with it only in the cartoon version presented by Quentin Tarantino in “Django Unchained.” (I’m very mixed on that film, by the way – there Are flashes of remarkable insight amid the spaghetti-western revenge fantasy. But the overall effect is to frame the reality of slavery as genre violence, and so push it further away.)

I should mention that the screenwriter of “12 Years a Slave,” the veteran TV writer and crime novelist John Ridley, is an African-American from Milwaukee, and, more important, that his source material is one of the most important American slave narratives of the 19th century. Solomon Northup (sometimes spelled Northrup or Northrop in the historical record), played by Ejiofor in the film with tremendous, slow-burning internal power, was a real person whose extraordinary odyssey into slavery and back out again made him famous in the years leading up to the Civil War. While it's impossible, at this distance, to verify every detail of Northup’s story, there’s also no reason to doubt its general outlines, which were reported in this New York Times story from 1853 and subsequently investigated by numerous historians.

Northup was a free-born “colored citizen,” a part-time musician and laborer who lived in Saratoga Springs, N.Y., with his wife and two children in 1841, when a pair of white men he didn’t know invited him to New York City and then to Washington, to play the violin with their traveling circus. The nation’s capital was a dangerous place for free black people at the time. The “slave catchers” who hunted runaways in the city and sent them back to the slave markets and plantations of the Deep South were not above abducting free people, and that’s what happened to Solomon Northup. As difficult as this is to imagine, it appears that’s what his circus employers had in mind all along. They got him drunk – possibly slipping him the 19th-century equivalent of a date-rape drug – and sold him to a Washington slave trader named James Birch (Christopher Berry in the film), perhaps under the premise that Solomon was really a fugitive slave from Georgia.

This early portion of McQueen’s “12 Years a Slave” is a straightforward period piece, but from the moment we first realize that Solomon is imprisoned in a slave pen within sight of the United States Capitol, the film builds its nightmarish, throbbing intensity. This is the story of an institution so toxic, so poisonous, that its tentacles can reach all the way to the Northup family’s apparently idyllic life in the bourgeois comfort of upstate New York, where their white neighbors and friends treat them with almost exaggerated decency. Slavery corrupted everything it touched, black and white, large and small, from ordinary life in the boondocks to the streets of the capital, and while it was an institution found at one time or another in every society and every historical epoch, it reached its full and noxious flowering in 19th-century America, the nation that claimed a special relationship with the divine and a unique heritage of universal liberty and equality.

James Birch decides he must break Solomon of his repeated insistence that he is not a runaway Georgia slave but a free man from New York. But the traumatic beating administered in that Washington slave pen, meant to “season a man to his condition” (a phrase found in historical advice pamphlets for slave owners), is far from the worst trial that awaits Solomon. He will pick cotton and cut sugar cane, he will shuffle and look downcast and pretend not to know how to read and write, he will address illiterate and incompetent white men as “master,” he will survive an attempted lynching and do nothing while he watches other men lynched who do not survive. But as harrowing as all that sounds, McQueen and Ridley (unlike Tarantino) never go a millimeter beyond known events and highly plausible scenarios. This is a story of survival and endurance in the face of atrocious and dehumanizing conditions, not a dose of medicine or masochism or sermonizing.

Nor does this film depict white people in the antebellum South – or the small minority of whites who owned slaves, that is -- as uniquely evil or sadistic. That’s not the point, and might even be the opposite of the point, which is more that slavery perverted everyone and everything. Cumberbatch, for instance, plays a plantation owner called Ford, Solomon’s first Southern master, who believes himself to be an enlightened and progressive man. He does not beat his slaves, encourages them to pursue their own endeavors, and immediately recognizes that Solomon (or Platt, his slave identity) is a man of unusual talents. But Ford’s self-image is a lie, and despite his immense material privilege he is almost as shackled as Solomon. The human kinship these two men think they feel – Solomon is understandably eager for it -- is no match for a social and cultural institution that insists one of them is a beast of burden, and the other his proprietor.

This film’s heart of darkness -- not an idle comparison, by the way -- arrives when Solomon is sold to a cotton planter called Epps (Fassbender), who rules with the Bible in one hand and the cat o’ nine tails in the other, and who has embraced the perverse logic of slavery to its fullest extent. He reminds me of the depraved Italian aristocrats in Pier Paolo Pasolini’s horrifying allegory of fascism, “Salò, or the 120 Days of Sodom,” and I wouldn’t be surprised if McQueen has that parallel in mind. Fassbender gives a ferocious, outsized yet highly believable performance as a Nietzschean superman of the bayous, from whom money, power, lust and whiskey have stripped all morality. While I’m not remotely suggesting that we should feel pity for this monstrous character, Epps puts me in mind of Robert E. Lee’s revealing (if profoundly racist) remark that slavery, in his judgment, was ultimately more damaging to whites than to blacks. Debased and demoralized as he is – and even forced to perform unspeakable cruelties -- Solomon retains some human dignity, some aspirations for a better future. It is Epps, rather than Solomon, whom the institution of slavery has reduced to the level of an animal.

Although the major roles in this wrenching moral drama are male, Lupita Nyong’o plays a crucial role as Patsey, the star cotton-picker on Epps' plantation, whom he has repeatedly raped and brutalized but has never completely broken. Indeed, after his own deeply disturbed fashion Epps loves Patsey, certainly more than he loves his embittered wife (the terrific Sarah Paulson), an ambiguous character who crackles with passion sublimated into madness and sadism. My own reading of the situation is that she’d like to do with Solomon just as her husband does with Patsey, but such erotic options were not really available to a plantation wife, trapped in her cocoon of comfort. Solomon is redeemed from slavery in the end, through the improbable agency of Brad Pitt as a Canadian carpenter. (The title of the film, I suppose, is a spoiler.) But “12 Years a Slave” offers no false Hollywood catharsis along with its muted happy ending, because we’re not free from the curse of slavery yet. Looking at it, the way it really was, is a start.