Benedict Cumberbatch makes a compelling Julian Assange, but the real WikiLeaks drama gets swamped in triviality 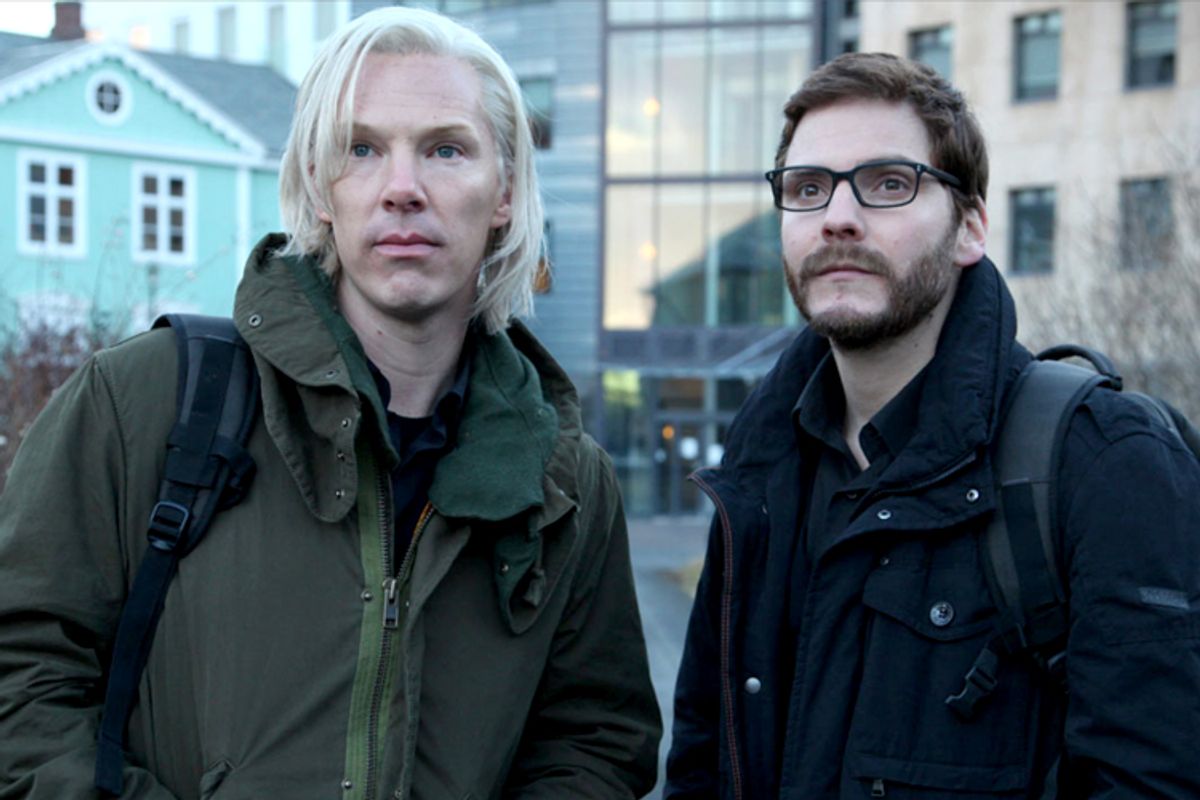 Benedict Cumberbatch plays Julian Assange in the pseudo-current thriller "The Fifth Estate" – and the match ends in a bitter nil-nil draw, as they'd say on British TV. This movie isn't terrible enough to derail the "Sherlock Holmes" star's upward trajectory toward pop-culture domination, but Cumberbatch's subtle and intriguing performance as the inscrutable Aussie loner behind WikiLeaks is surrounded by a plodding and minor melodrama that's ludicrously ill suited to the material. Assange, meanwhile, has orchestrated a campaign of invective against director Bill Condon's film, and even against Cumberbatch, from his self-exile in London's Ecuadorian embassy, but he needn't have bothered. The world will little note nor long remember this damped-down, mistimed dishwater retelling of one of our young century's signal events.

Maybe there's a great work of fiction or cinema or philosophy or some yet-to-be-invented form of multi-platform digital opera to be derived from the story of Julian Assange, WikiLeaks and Chelsea Manning. This isn't it, although I suppose one could say that for some notional middle-stratum viewer who knows almost nothing about the story, "The Fifth Estate" provides a capable retelling that doesn't get any of the major known facts completely wrong. What it never does is rise to the level its subject deserves, and I am not talking mainly or exclusively about the portrayal of Assange and whether he is seen as good or evil. Mainstream narrative cinema – and mainstream documentary cinema too, including Alex Gibney's flawed but far more informative "We Steal Secrets" – focuses intensely on character and personality, on seemingly untethered questions of individual morality. These are almost irresistible in the case of Julian Assange, a charismatic, vainglorious and larger-than-life personality who seems like a combination of a Marvel Comics supervillain, Thomas Paine and John Milton's Satan, waging fruitless warfare against the throne of heaven.

A fictional portrait of Assange yearns to be grandiose and Wagnerian, in the mode of Christopher Nolan. (Assange's one-time hacker nickname, Splendide Mendax, a phrase drawn from Horace that is usually translated "nobly untruthful," also describes Nolan's version of the Batman.) Or it could be worshipful fan fiction, or a work of fractured and unwatchable postmodernism. Can we be positive that Assange was not born as an epigram-spouting background character in "The Matrix Reloaded," or as a hard-eyed revolutionary ladykiller in a forgotten Godard film from 1972? As for the question of whether to view Assange as a saint or a demon, it's a trap and ultimately not an interesting one. The real issues, as even he would agree, are much bigger than that, and none of us yet knows how history will judge the legacy of WikiLeaks and the immense trove of government secrets it set free. It all depends, of course, on who will end up writing the history.

Josh Singer's screenplay for "The Fifth Estate" was adapted from two books that are largely critical of Assange. The most important source was clearly "Inside WikiLeaks: My Time With Julian Assange at the World's Most Dangerous Website" by Daniel Domscheit-Berg, a German programmer and hacker who became one of Assange's closest associates and then the leading WikiLeaks defector and dissident. As played by the agreeable Daniel Brühl in the film, Domscheit-Berg is an early believer in Assange's gospel of revolutionary transparency and info-liberation, but one who is repeatedly seduced and abandoned. He believes Assange's rhetoric about WikiLeaks and its "hundreds of volunteers," when the movie makes it clear from the beginning that the white-haired genius is a one-man show. He believes the digital architecture of the WikiLeaks platform is secure when it turns out to be easily cracked, and he believes Assange will conceal the names of vulnerable civilians in the hundreds of thousands of United States military logs from Iraq and Afghanistan leaked by Private Manning.

The movie's Berg keeps going away in tears and coming back for more abuse, like a jilted girlfriend. In one scene on a rocky Icelandic beach, Cumberbatch's moody Assange explains that he may be on the autism spectrum, which is why he's so hard on the people around him. (While that sounds like a plausible hypothesis as regards Assange's personality, I have no idea how to judge the veracity of this anecdote.) All this Berlin-to-Nairobi-to-Reykjavik melodrama creates insoluble problems for the filmmakers, but not quite in the way Assange and his loyalists think.

It's not that the portrait of the WikiLeaks impresario is too unflattering but that the bigger story – or what ought to be the bigger story, anyway -- is swallowed up in the trivial details of a failed geek bromance. Assange meets Berg's perfectly lovely middle-class parents – and, OMG, flees out the bathroom window, because he's too much of a maladjusted creep to make it through a polite dinner! Meanwhile, oh yeah, "Collateral Murder," all the disastrous details of two failed wars, and all the State Department's most precious foreign-policy cables. Whatever! Let's get back to the burning question of whether or not Assange dyes his hair, or whether it turned white in his youth, as he has sometimes claimed. (Nothing speaks more clearly to Assange's isolation in that London embassy, or to his lack of both common sense and good P.R. advice, that he has chosen to dispute this detail.)

In a recent statement accompanying the release of his overwrought open letter to Cumberbatch, in which he detailed his refusal to meet the actor personally, Assange described "The Fifth Estate" as "a film by the old media about the new media." Self-serving as that may be, I'm afraid it's also dead-on. Condon, who directed the last two "Twilight" movies and "Dreamgirls," is a competent and ethical Hollywood craftsman of the old school. But he has no particular feeling for this material and the only container Singer's script provides is a combination of stale character drama and warmed-over thriller. Condon's efforts to represent the digital world of WikiLeaks with dreamlike shots of an infinitely receding office full of multiple Julian Assanges feel as forced as the pseudo-hip, graffiti-laden Berlin nightclubs, where chicks with funny haircuts make out with each other.

"The Fifth Estate" also uneasily tries to address the way WikiLeaks interacted with the mainstream media; Guardian reporter Nick Davies, an important collaborator and critic of Assange's, is played by David Thewlis, delivering homilies about How Significant This All Is. In an ill-considered subplot that must have struck someone, somewhere, as an important balance note, Laura Linney, Stanley Tucci and Anthony Mackie play Obama administration officials struggling with the effects of all the WikiLeaks revelations. (Bradley Manning, as Chelsea was then known, is mentioned but never appears.) I believe that Condon and Cumberbatch and the other people who made "The Fifth Estate" had approximately good intentions, and the film is watchable and intermittently entertaining. But in telling four or five different stories at once they muddy them all fatally. Instead of the transparent, open-source version of the WikiLeaks story, this is the bug-filled, Windows 8 beta version.