Inside the Fox News lie machine: I fact-checked Sean Hannity on Obamacare 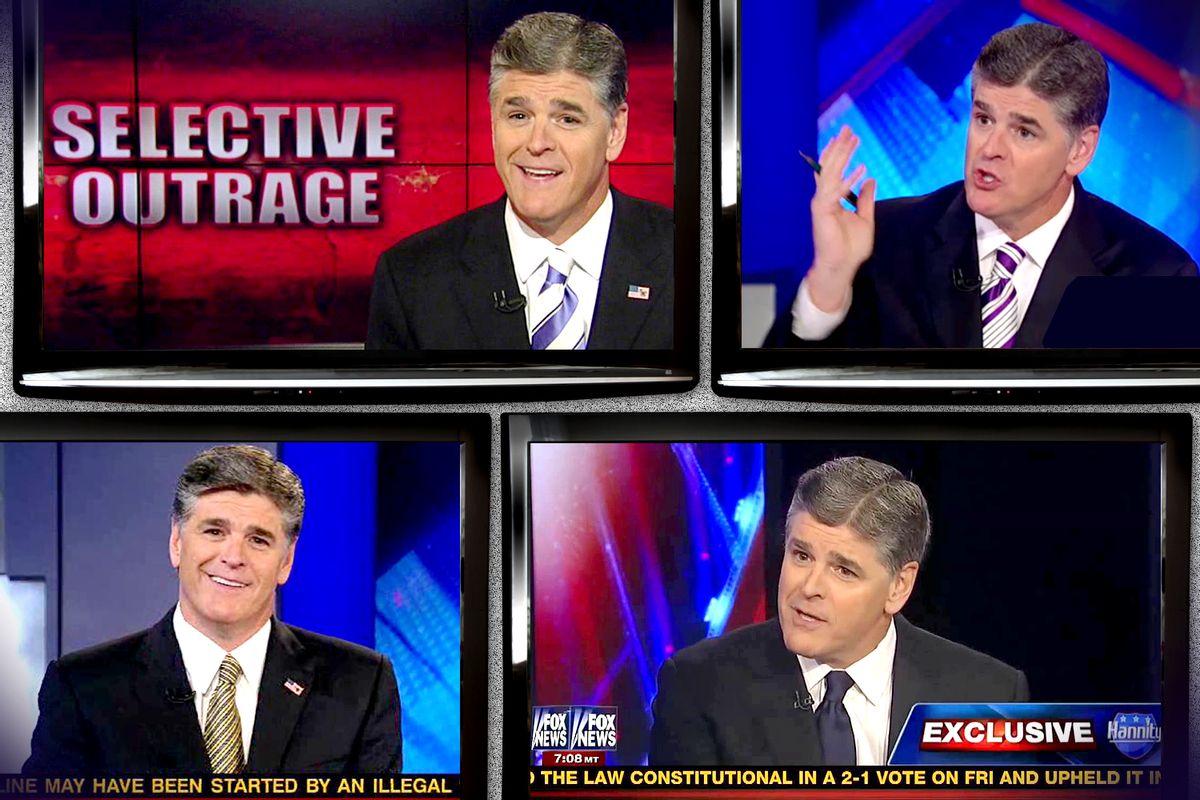 I happened to turn on the Hannity show on Fox News last Friday evening. “Average Americans are feeling the pain of Obamacare and the healthcare overhaul train wreck,” Hannity announced, “and six of them are here tonight to tell us their stories.”  Three married couples were neatly arranged in his studio, the wives seated and the men standing behind them, like game show contestants.

As Hannity called on each of them, the guests recounted their “Obamacare” horror stories: canceled policies, premium hikes, restrictions on the freedom to see a doctor of their choice, financial burdens upon their small businesses and so on.

“These are the stories that the media refuses to cover,” Hannity interjected.

But none of it smelled right to me. Nothing these folks were saying jibed with the basic facts of the Affordable Care Act as I understand them. I understand them fairly well; I have worked as a senior adviser to a governor and helped him deal with the new federal rules. I decided to hit the pavement. I tracked down Hannity’s guests, one by one, and did my own telephone interviews with them.

First I spoke with Paul Cox of Leicester, N.C.  He and his wife Michelle had lamented to Hannity that because of Obamacare, they can’t grow their construction business and they have kept their employees below a certain number of hours, so that they are part-timers.

Obamacare has no effect on businesses with 49 employees or less. But in our brief conversation on the phone, Paul revealed that he has only four employees. Why the cutback on his workforce? “Well,” he said, “I haven’t been forced to do so, it’s just that I’ve chosen to do so. I have to deal with increased costs.” What costs? And how, I asked him, is any of it due to Obamacare? There was a long pause, after which he said he’d call me back. He never did.

There is only one Obamacare requirement that applies to a company of this size: workers must be notified of the existence of the “healthcare.gov” website, the insurance exchange. That’s all.

Next I called Allison Denijs.  She’d told Hannity that she pays over $13,000 a year in premiums. Like the other guests, she said she had recently gotten a letter from Blue Cross saying that her policy was being terminated and a new, ACA-compliant policy would take its place. She says this shows that Obama lied when he promised Americans that we could keep our existing policies.

Allison’s husband left his job a few years ago, one with benefits at a big company, to start his own business. Since then they’ve been buying insurance on the open market, and are now paying around $1,100 a month for a policy with a $2,500 deductible per family member, with hefty annual premium hikes.  One of their two children is not covered under the policy. She has a preexisting condition that would require purchasing additional coverage for $600 a month, which would bring the family’s grand total to around $20,000 a year.

I asked Allison if she’d shopped on the exchange, to see what a plan might cost under the new law. She said she hadn’t done so because she’d heard the website was not working. Would she try it out when it’s up and running? Perhaps, she said. She told me she has long opposed Obamacare, and that the president should have focused on tort reform as a solution to bringing down the price of healthcare.

I tried an experiment and shopped on the exchange for Allison and Kurt. Assuming they don't smoke and have a household income too high to be eligible for subsidies, I found that they would be able to get a plan for around $7,600, which would include coverage for their uninsured daughter. This would be about a 60 percent reduction from what they would have to pay on the pre-Obamacare market.

If Allison’s choice of doctor was denied her through Obamacare then, yes, she could have a claim that Obamacare has hurt her. But she’d also have thousands of dollars in her pocket that she didn’t have before.

Finally, I called Robbie and Tina Robison from Franklin, Tenn.  Robbie is self-employed as a Christian youth motivational speaker. (You can see his work here.) On Hannity, the couple said that they, too, were recently notified that their Blue Cross policy would be expiring for lack of ACA compliance. They told Hannity that the replacement plans Blue Cross was offering would come with a rate increase of 50 percent or even 75 percent, and that the new offerings would contain all sorts of benefits they don’t need, like maternity care, pediatric care, prenatal care and so forth.  Their kids are grown and moved out, so why should they be forced to pay extra for a health plan with superfluous features?

When I spoke to Robbie, he said he and Tina have been paying a little over $800 a month for their plan, about $10,000 a year. And the ACA-compliant policy that will cost 50-75 percent more? They said this information was related to them by their insurance agent.

Had they shopped on the exchange yet, I asked? No, Tina said, nor would they. They oppose Obamacare and want nothing to do with it. Fair enough, but they should know that I found a plan for them for, at most, $3,700 a year, 63 percent less than their current bill.  It might cover things that they don’t need, but so does every insurance policy.

It’s true that we don’t know for sure whether certain ills conservatives have warned about will occur once Obamacare is fully enacted. For example, will we truly have the same freedom to choose a physician that we have now? Will a surplus of insured patients require a scaling back (or “rationing,” as some call it) of provided healthcare services?  Will doctors be able to spend as much time with patients? These are all valid, unanswered questions. The problem is that people like Sean Hannity have decided to answer them now, without evidence. Or worse, with fake evidence.

I don’t doubt that these six individuals believe that Obamacare is a disaster; but none of them had even visited the insurance exchange. And some of them appear to have taken actions (Paul Cox, for example) based on a general pessimistic belief about Obamacare. He’s certainly entitled to do so, but Hannity is not entitled to point to Paul’s behavior as an “Obamacare train wreck story” and maintain any credibility that he might have as a journalist.

Strangely, the recent shutdown was based almost entirely on a small percentage of Congress's belief that Obamacare, as Ted Cruz puts it, “is destroying America.”  Cruz has rarely given us an example of what he’s talking about.  That’s because the best he can do is what Hannity did—exploit people’s ignorance and falsely point to imaginary boogeymen.

Update: To check the plans I used this useful calculator from the Kaiser Family Foundation.