Its happening: electric cars are hitting the race track

Electrics are threats to the racecars in the unlimited class, which has no restrictions other than safety 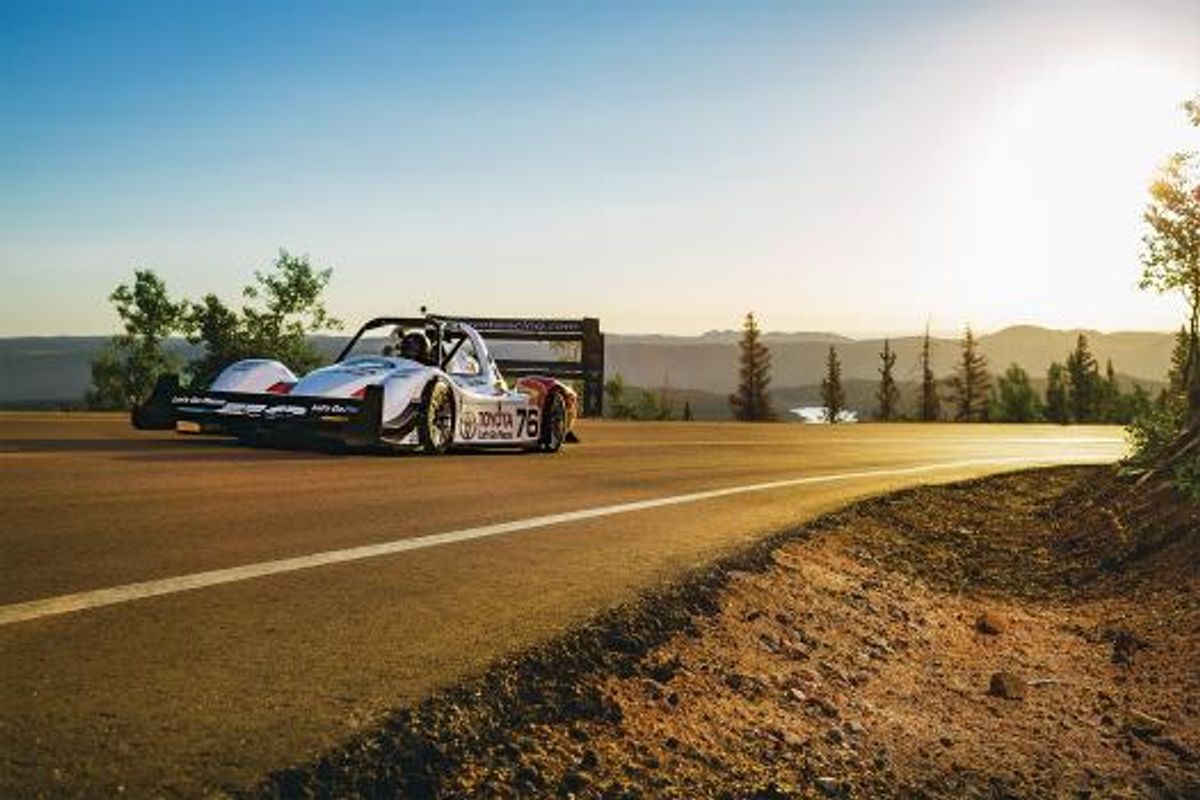 Rod Millen flips down the visor on his helmet, inches toward the flagman, and sights down the strip of tarmac that leads to the starting line. The road ahead bends right—the first of 156 turns over the next 12.42 miles—and climbs quickly out of sight. The finish line is the 14,110-foot summit of Colorado's Pikes Peak, an unforgiving mountain that's tempted racecar drivers with both glory and disaster for the past 91 years. Millen has won the Pikes Peak International Hill Climb nine times, and he set the course record in 1994. His son, Rhys, set another record last year, reaching the summit in a scorching 9 minutes and 46 seconds; Millen thinks he can beat it.

Race veteran Rod Millen piloted Toyota's EV. "Right foot on the go pedal, left foot on the brake, no shifting, and no lag in power and torque. You can focus more on what you're doing," he says. "On the other hand, the whole car weighs a lot more than a gas car would."

He gets the green flag and rolls onto the throttle. For a split-second, Millen feels the rear tires struggle for traction, and then the 563-horsepower vehicle launches toward the first corner, wailing like a one-car police pursuit. Its 120-decibel siren is the only clue that spectators will have of Millen's approach, because this year his racecar, the Toyota TMG EV P002, is almost silent. For the first time in his career, Rod Millen is racing up Pikes Peak in an electric car.

The vehicles engineered to conquer races have historically been the fastest, most powerful, most advanced cars on any road. For decades, racecars served as laboratories where new technology would succeed or fail, and successes often filtered down to production models. But to maintain the suspense of a close competition, modern races, from the circle tracks of the South to the Formula One circuit in Shanghai, now enforce strict rules. And so rather than innovate, engineers have become preoccupied with exploiting tiny loopholes.

As a result, today's production cars are often more advanced than their racing counterparts. A Ferrari 458 Italia offers a traction-control system that's illegal in Fernando Alonso's Ferrari Formula One car, and the Toyota Camry NASCAR racer thundering along the high bank of Daytona can't use the overhead cams and variable valve timing found in every showroom model. No Porsche racer ever built can match the powertrain sophistication of the forthcoming 918 Spyder.

Fortunately, there's one competition where rules haven't stifled innovation. At the Pikes Peak International Hill Climb, the speed lab is alive and well, and the most rapid developments are happening in the electric class. Advances in power management, torque vectoring, and even high-speed charging are tested on the mountain and improved upon each year. And, unlike most of the big-money forms of racing, some of what's learned above the Colorado tree line could actually make its way into garages.

The fastest electric car at Pikes Peak in 2012. This year, it returned with more power.

Until a few years ago, the electric class was little more than a novelty; Joe Ball's Sears electric car took more than half an hour to reach the summit in 1981. But now electrics are legitimate threats to the racecars in the unlimited class, which has no restrictions other than safety. In 2012, Toyota's electric car clocked the fastest overall time on the top section of the mountain, reflecting its twin motors' advantage at high altitude, where the internal-combustion cars lose about 30 percent of their power to the thin air. Most agree that it's only a matter of time before Pikes Peak is ruled by electricity rather than gasoline.

The MiEV's other advantages include instant four-wheel torque vectoring and regenerative braking—which, in race conditions, means that the electric motors can act as a second set of brakes to help keep the conventional pads and rotors from overheating. "I had to adjust to the car's capabilities," Tracy says. "Every practice run, I got faster." Mitsubishi's Lancer Evo production car is famous for its torque-vectoring all-wheel-drive system, which endows the sedan with physics-defying agility. In gas-powered cars, such systems are purely mechanical, but Mitsubishi's electric racers promise even quicker reactions by varying the speeds of each wheel's individual motor.

But electric racers still face one daunting handicap: weight. Batteries now have the capacity to send cars to the summit, but because they can't match the energy density of gasoline, cars need a larger pack. "Battery weight is the most important problem that electric vehicles face in the future," says Naonobu Tajima, chief engineer for the Monster Sport E-Runner fielded by Team APEV. "Our racecar weighs in at 140 to 150 percent of the weight of the unlimited-class race cars. With 156 corners, corner speed and agility is crucial, so weight reduction plays a great part in competition." It also remains a central challenge for production models: Decreasing the weight of electric vehicles would increase their range significantly.

An electric motor at each rear wheel provides nearly 600 hp and 900 lb-ft of torque in full race mode; they can also act as brakes.

A few weeks before the race in June, Toyota agrees to let me drive its one and only electric racecar at Toyota Racing Development (TRD) facility in Salisbury, North Carolina. "Normally, race programs are secretive," says Steve Wickham, TRD's vice president of chassis development. "But we can show you this because at Pikes Peak there are no rules"—and thus no rule-bending secrets.

Wickham's résumé includes high-profile series such as Formula One and NASCAR, and he seems like the kind of guy who is generally compelled to wring more speed out of whatever wheeled object he encounters. His kids have the fastest electric Razor dirt bikes in the neighborhood since Dad upgraded them to 48 volts from the factory 36. He sees no reason why the EV P002 shouldn't be the fastest electric car up the mountain.

Based on a Radical SR8 chassis, Toyota's electric car weighs 2,500 pounds and will produce about 563 horsepower and 900 lb-ft of torque on the day of the race. Until then, Millen will practice with about 15 percent less power because that full-throttle run will cook the motors in the process. Even with perhaps 500 horsepower available, the EV P002 has a power-to-weight ratio at the crazy, Bugatti Veyron end of the spectrum. And a Veyron doesn't offer maximum torque at zero rpm, one of the most noticeable performance benefits of electric motors.

As I putter over to an access road on TRD property, Wickham reminds me of my unique opportunity to derail the entire Toyota Pikes Peak effort. "We have one set of wings, so don't hit those on anything," he says. "And the brakes are carbon, so they won't really work because they're not hot. Be careful—it's only priceless." It's actually a couple of million dollars in development and parts. Still, no pressure.

Brake-cooling ducts highlight one of the challenges of Pikes Peak—keeping brakes from overheating in the thin air.

I line up at one end of the road, sight the cul de sac at the far side, and squeeze down the throttle. What follows is extreme cognitive dissonance. The shove in the back and the sensation of warping from one place to another is accompanied by only a high-pitched whirr from the motors, along with wind noise and the sound of road grit spiking off the underside of the fenders. I've probably experienced this type of acceleration before, but any other car with thrust like this would be wailing out a mechanical cacophony of intake gurgle, exhaust boom, and turbocharger whine. In the EV P002, one moment you're sitting still and the next you'd better hit the brakes because you're running out of road. Tracy says that electric racecars are initially disconcerting because the brain is expecting aural cues that just aren't there. I know what he means. It's like miniaturizing myself and strapping into the slot car I raced as a kid.

I take a few progressively faster runs before returning Wickham's car while it's still in one piece. If this is a taste of the electric future, then it is bright indeed.

Race day at Pikes Peak started out sunny and clear. The gas-powered cars in the unlimited class surge up the mountain first, and World Rally champion Sébastien Loeb makes it to the summit in a 875-horsepower Peugeot in 8 minutes and 13 seconds—a new record. But the weather has shifted by the time the electric vehicles line up. There are reports of sleet high up on the mountain. With a mix of dry and wet pavement, the electric teams aren't even sure which tires to use.

"I can't tell you how many times I've raced on Pikes Peak and it's been beautiful during practice and then different on race day," Millen says. While his practice times extrapolate to a mid-nine-minute run, his race time is about 45 seconds slower. "We were only a few seconds off the quickest time, but Mother Nature dumped on us," Millen says. "We got rained on; the unlimited guys didn't. It's a crapshoot."

Tracy, in the all-wheel-drive Mitsubishi, finishes less than a second ahead of Millen. They come in third and fourth place among the electrics, respectively. Tracy is impressed by the times, given the circumstances. "You take one of the most dangerous races in the world and make it wet," he says. "To pull up to the line in those conditions and run 10:23 is unbelievable." Using hand-grooved slick tires on the Monster Sport E-Runner, Nobuhiro Tajima (Naonobu's brother) wins the electric class with a time of 9:46, the first sub-10-minute run of the electric era.

In the meantime, electric racecars have already proved that eco-friendly vehicles can be capable of brutal, old-fashioned speed. "Most people have no clue when they see a Leaf that there is this potential for performance," Tracy says. The teams are poised to overcome other hurdles to widespread adoption too. For example, Toyota figured out how to charge the EV P002's battery—at 42kWh, nearly 10 times larger than a Prius Plug-in's—in just an hour and a half. "The car morphed from a test bed for powertrains to a test bed for high-speed charging strategies," Wickham says.

Though internal-combustion vehicles enjoyed a century-long technological head start, electric cars now loom ever larger in their rearview mirrors, both on and off the mountain. "Can you imagine if we took half the weight out of our car with new battery technology?" Wickham asks. "It would be unbeatable."

Via the steering wheel, a driver can choose different torque and traction maps to suit road conditions.

Ezra Dyer has won multiple International Automotive Media awards for his coverage of car technology. This article originally appeared in the October 2013 issue of