A Philly sixth-grader's death from asthma could have been prevented. Why do we cut nurses and add armed guards? 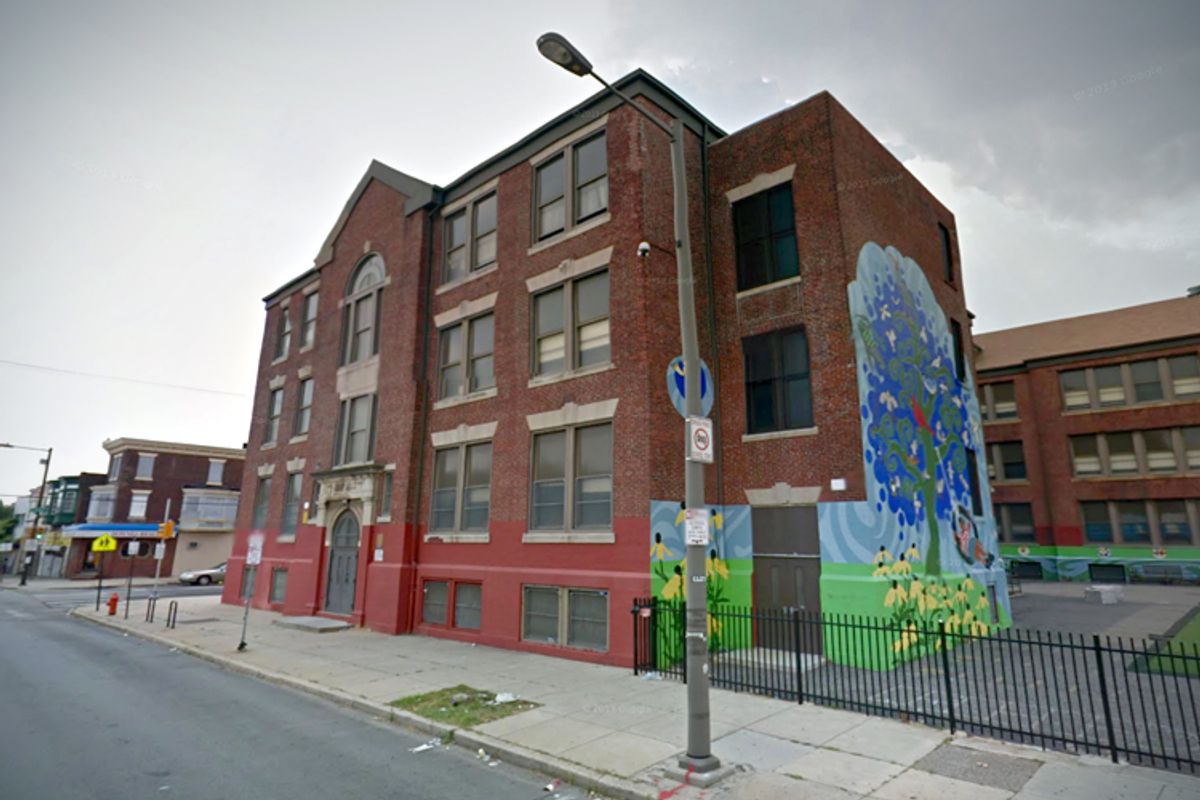 Another awful story has America searching its soul about how it treats its children.

This time, the story is about Laporshia Massey.

That Laporshia, a Philadelphia sixth-grader, died from an asthma attack, a disease she was chronically afflicted with, is not something that would normally make national headlines, yet it vaulted into mainstream consciousness.

The event that led directly to Laporshia's death began at school, where funding cuts to the nation's eighth largest school district had left most children bereft of full-time school nurses who know what to do during an attack of a life-threatening disease.

In Laporshia's case, teachers weren't trained to discern the severity of her condition, and there was no school nurse to intervene. By the time she got home, her father tried to get help. Sadly, there was too little time, and the Laporshia died on the way to the emergency room.

"His daughter might be alive if not for school-nurse cuts," was how Daniel Denvir reported the story in the Philadelphia City Paper, quoting the grief-stricken father.

That headline resonated to local news outlets that reported, "Sixth-grader's death adds to fears over Philly layoffs of school nurses." National outlets such as Think Progress wrote, "Sixth Grader’s Father Says She Wouldn’t Have Died if a School Nurse Had Been On Duty." And MSNBC told the nation, "School tragedy sparks outrage over cuts."

A grieving family calling for "what should have prevented this" ... a community reeling from its inability to protect its most vulnerable citizens ... a national press searching for answers to an immense tragedy ... where have we seen this before?

After the horrendous slaughter of 20 school-children at Sandy Hook Elementary School in Newtown, Conn., a heartbroken President Obama implored the nation, “This is our first task – caring for our children. It’s our first job. If we don’t get that right, we don’t get anything right.”

All About the Money?

Writing about Laporshia's death at Forbes, Kelly Phillips Erb seemed to cover all the mitigating factors leading to the tragedy: how budget cuts led to layoffs and retirements of more than 100 school nurses in the past school year, how state requirements of 1,500 students for every one nurse left kids vulnerable, and how national reports have warned that "scaling back health services can have potentially damaging consequences."

And then Erb distilled the story to this: "I don’t think anyone denies that having a nurse in school is a good thing. Like much of our discussions about schools in this country, the debate really comes down to money."

But if "money" is the first task of keeping children safe, isn't it important to decide what to spend the money on?

Right now, Philadelphia, the state of Pennsylvania and indeed the rest of country have the priorities severely out of whack.

Not Just a Philadelphia Story

That Philadelphia schools have been starved of financial resources is a fact that does not appear to be in dispute. Schools in that city have indeed been subjected to severe budget cuts resulting from state negligence, the loss of federal stimulus funds and the city's dwindling financial resources.

Also, Philadelphia's lack of school nurses is, in fact, not news. As a Philadelphia parent organization Parents United for Public Education pointed out in its coverage of the Laporshia's death, a report on the school nurse shortage in Philadelphia issued by the Education Law Center over a year ago found that 52 percent of school-children in the city are not receiving urgent medical care, 36 percent do not receive their treatments at prescribed intervals, and most (70 percent) that do get medications have them administered by teachers or aides rather than trained medical personnel.

What's happened to Philadelphia's frontline health and safety responders – nurses, counselors and social workers – mirrors the rest of Pennsylvania. According to another MSNBC report, Pennsylvania's Republican Gov. Tom Corbett "solved" a $4 billion budget deficit with "an austerity budget that would cut over $1 billion from education," while taking no action on raising new tax revenues and in some case cutting them.

This left school districts with little choice but to cut spending on personnel who would have the least proximity to the classroom, such as nurses, counselors, social workers and other support staff.

The fate of frontline school health and safety staff in Pennsylvania is actually a trend across the nation.

As the Wall Street Journal recently reported, school nurses "are being cut from Philadelphia to San Diego." The WSJ article recounted school nurse cuts in Los Angeles of 13 percent and 55 percent in Cleveland.

A look at the ratio of the number of students to school nurses in states across the country reveals that 25 states have over 1,000 students for every nurse – despite studies showing that maybe half of the nation's children may be suffering from one or more chronic diseases, and maybe one in five may be developmentally disabled.

Asthma, which claimed Laporshia's life, is a particularly huge impediment to student learning, and according to the American Federation of Teachers, one in 11 children nationwide has asthma, and in Philadelphia, the statistic is closer to one in five.

School counselors in many states have suffered loss of jobs similar to school nurses, as have school social workers.

So allocating money to keep children healthy and safe in schools has seemed to slip off the nation's spending priority, until you look at what schools are spending money on.

After the massacre of school kids at Sandy Hook Elementary School, President Obama responded with a new, $150 million "Comprehensive School Safety program" to pay for a variety of school safety measures. The funding package left states the option to decide where the money ought to go – to hire more counselors and social workers or to hire more school guards. Now, it appears more schools chose the latter.

Education reporter for the Huffington Post Joy Resmovits recently reported that many states responded to the new funding sources by ramping up their numbers of armed guards. According to Resmovits, some 30 states took the lead from "the NRA and school police" to consider measures that require armed guards in schools.

Based on statistics Resmovits was able to ferret from a national group representing armed guards in schools, there may be as many as 10,000 school resource officers (the terminology for school police) currently working in schools around the country, and "the practice is spreading rapidly."

As the Politics K-12 blog at Education Week observed, the Obama administration helped move this effort along by providing “incentives for schools to hire resource officers ... by giving priority to applicants who plan to use the U.S. Department of Justice’s COPs grants.”

In fact, the Department of Justice recently announced even more new grants to fund school guards.

The National Parent Teachers Association noted the White House’s move to encourage more guns and guards in schools and declared that action a “disappointment.”

Pennsylvania was one of the states to take advantage of new federal money to outfit more schools with guards.

Beginning this year, according to state news sources, public and private schools in Pennsylvania were able to apply for more than $8 million in grants to pay for armed guards – up to "60 percent of the funds can now go into grants for armed guards, or resource officers."

Called the "Safe Schools" program, the provision was signed by Gov. Corbett at the same time he was withholding $45 million in funding for the Philadelphia school system – money that could have paid for nurses and other health and safety personnel.

In Philadelphia, last year's budget deliberations put into consideration current expenditures of $15.5 million for school police. At the time, local school commissioners, who are appointed by the state, concluded that cutting money from school police was "clearly not desirable or feasible," and in the final budget that eventually passed, savings of only $600,000 came out of funds for school officers.

A recent article in the New York Times looked at the track record for adding more guards in schools and found “the most striking impact of school police officers so far, critics say, has been a surge in arrests or misdemeanor charges for essentially nonviolent behavior – including scuffles, truancy and cursing at teachers – that sends children into the criminal courts.”

“Nationwide,” the report continued, “hundreds of thousands of students are arrested or given criminal citations at schools each year” with Texas setting the worst example, “where police officers based in schools write more than 100,000 misdemeanor tickets each year.”

“A large share are sent to court for relatively minor offenses, with black and Hispanic students and those with disabilities disproportionately affected,” the report found.

When a Washington, D.C.-based civil rights group studied the results of increased police presence in schools, their investigation found that officers were so rarely called upon to address real emergencies that they found “something else to do” and became “the de facto disciplinary arm of the school.”

As reported by USA Today’s Greg Toppo, increased police presence in schools resulted in a spike in students being arrested in school “for things like disorderly conduct” that previously would not involve the criminal justice system.

According to Toppo's report, harsher, more punitive security measures in schools have resulted in over 3 million students being suspended and over 100,000 students being expelled nationwide, each year.

Can We Please Get the Priorities Right?

Certainly Philadelphia school officials were aware they had a choice in whether to spend money on school nurses and counselors or to follow the lead of so many other schools that have chosen the negative consequences of spending more money on schools guards.

We know these officials were aware of the choice because they had an example to follow in their own backyard.

As recently reported in the Atlantic, one Philly school "in a desperately poor, dangerous part of town" decided to defy the trend toward harsh school security measures and invest in its students instead. The result: Violence dropped by 90 percent.

Instead of metal detectors and bars, the school underwent a "humanizing physical makeover." Instead of zero tolerance discipline, school personnel employed "noncoercive, nonviolent conflict resolution." Instead of "aggressive security guards," the school hired "engagement coaches, who provide support, encouragement, and a sense of safety."

In short, the school chose to make real investments in its students and in school personnel who can care for them. And they didn't let money get in the way.

Returning to the words President Obama spoke to us at a ceremony for 20 murdered kids, he didn’t speak about our children’s welfare as if it were a budget problem. He asked us to consider whether “we’re truly doing enough to give all the children of this country the chance they deserve to live out their lives in happiness and with purpose.”

For Laporshia Massey, we clearly didn't do enough. She didn't get her chance. And we have to do better.