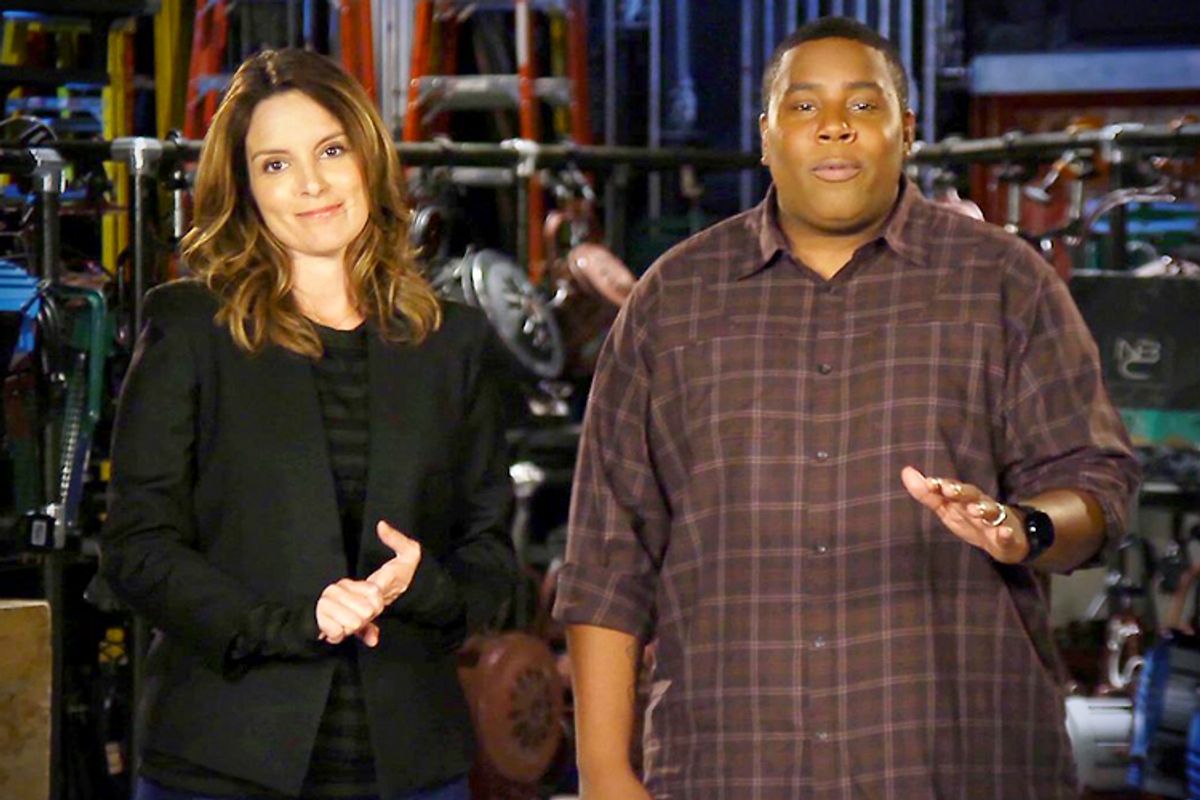 Kenan Thompson’s claim that “Saturday Night Live” has no black female cast members because qualified black female comedians just aren’t out there has prompted a lot of much-needed discussion -- it's also an opportunity to look back at the show's history. While “SNL” has had only four black women cast members in the 38-year history of the show, the success of “SNL” alums like Tina Fey, Amy Poehler, Kristin Wiig and Maya Rudolph make it easy to forget that, once upon a time, “SNL” used to have issues with women overall.

In her memoir "Bossypants," Tina Fey recounts an incident that happened during her first week as an “SNL” writer. Sylvester Stallone was the guest host, and the writers had planned a Rocky-themed monologue. According to Fey’s account, instead of casting Cheri Oteri to play the part of Rocky’s wife Adrian, someone decided it would be funnier to put Chris Kattan in a dress. Fey refers to that decision as “kind of bullshit.” She contrasts that instance to how the show operated by the end of her nine-year tenure:

By the time I left nine years ago, that never would have happened. Nobody would have thought for a second that a dude in drag was funnier than Amy, Maya, or Kristen. The women in the cast took over the show in that decade, and I had the pleasure of being there to witness it.

Fey’s assertion that “nobody” would have thought “a dude in drag” was funnier than any of “SNL’s” female cast is odd, considering that, for years, the job of playing black women on “SNL” fell to its black male cast members like Thompson and Tracy Morgan. While Maya Rudolph did impersonations of glamorous black celebrities like Whitney Houston and (as guest host) Beyoncé, Thompson has portrayed a host of recurring black female characters like Virginiaca Hastings, all hewing to the overweight, loud-mouthed, sassy Sapphire stereotype. Thompson’s black female celebrity impersonations include Aretha Franklin, Serena Williams, Mo’Nique, Chaka Khan and Patti LaBelle. Fey’s statement about putting an end to dudes in a dress on "SNL" is true only if Thompson didn’t count as a dude in drag, or if the black female characters he played didn’t count as women.

Without the inclusion of black and other women of color on “SNL,” the achievement Fey trumpets remains, at best, unfinished. “SNL” has had no black woman cast member since Rudolph’s departure in 2007. The only woman of color in the cast is Iranian-American actress Nasim Pedrad – who, in an ironic twist of fate, may have donned brownface recently to play Aziz Anzari.

It is unlikely, as some have suggested, that Thompson’s comments to TV Guide were driven by a desire to keep playing female characters, given that he’s proclaimed his days in a dress on “SNL” are over. To the contrary, Thompson remarked that since he and Pharoah are no longer willing to play women in drag, the cast and writers “just haven’t done” black women characters or celebrity impressions thus far this season.

It’s entirely possible – as Alyssa Rosenberg of ThinkProgress argues – that Thompson has exposed structural factors that make it difficult for “SNL” to find talented black women comedians. For instance, “SNL” does not use an open call process to search for potential new cast members. According to Franchesca Ramsey, producer of the popular YouTube video “Shit White Girls Say … to Black Girls,” anyone can submit a video to “SNL” for consideration, but they must be invited by the show’s casting team to audition. It's unclear how many black women submit audition tapes to “SNL’s” casting department, or how many black women are invited to audition for “SNL” each season -- but if either of those numbers is low, one obvious solution would be for “SNL’s” casting department to increase the number of black women comedians and actresses they invite to try out for the show.

Although no one has identified what makes a person “ready” to join the “SNL” team, the show’s atmosphere and working conditions are known to be demanding. Fey described "SNL" as “a mix of hyperintelligent Harvard Boys (Jim Downey, Al Franken, Conan O’Brien, Robert Smigel) and gifted, visceral, fun performers (John Belushi, Gilda Radner, Jan Hooks, Horatio Sanz, Bill Murray, Maya Rudolph)” – a unique culture where the ability to fit in is important. In some cases, it may be valid to reject a candidate on the basis of “fit” or “readiness,” but all too often, these are simply excuses for maintaining the status quo. If "SNL" were truly interested in embracing diversity and inclusion, its casting people would broaden their search beyond Harvard and improv powerhouses like Second City and the Groundlings to find talented writers and comedians of color of all genders -- and then work to develop them into “SNL”-ready talent.

Such an approach is not unprecedented in “SNL’s” history. Michaels’ ability to spot talent in unusual places – he found Tracy Morgan selling souvenirs at Yankee Stadium – has been called “the stuff of comedy legend.” Morgan credits Michaels with teaching him the business. In other words, Morgan wasn’t ready, either -- but Michaels took him under his wing and groomed him. If Michaels could do that for an unproven black male comic, he could do the same for a black woman comedian with potential, even if she is not quite “ready.”

Michaels bears the lion’s share of the blame for “SNL’s” dismal hiring record with black women, but as Fey’s Chris Kattan story illustrates, complaints about the show’s lack of diversity from its only two black cast members – Thompson and Jay Pharoah – are probably not enough. If Fey had been as outraged by Thompson playing Oprah as she was about Kattan playing Rocky’s wife Adrian, “SNL” might have hired a black woman comedian to play the characters that Rudolph couldn’t play, rather than putting Thompson in a dress. Instead, in the words of Mikki Kendall -- creator of the #solidarityisforwhitewomen Twitter hashtag -- at “SNL,” all the blacks are men, and all the women are white.

Many have wondered why “SNL’s” refusal to hire and retain a black woman cast member matters, especially in light of the show’s fading cultural relevance, and the emergence of other avenues for black writers and comic actors to showcase their talents. Some point to Issa Rae, who parlayed her highly successful Web series “Awkward Black Girl” into mainstream success -- Rae currently has a comedy series in development at HBO. But “SNL” is still an important proving ground for writers and comedy actors, and Michaels remains one of entertainment’s most prolific star makers. Black female comedians at the top of their game should have the same access to top tier opportunities like “SNL” as their male and white female counterparts.