I will not let the memory of my beloved boy, now dead, get roped into the anti-abortion worldview 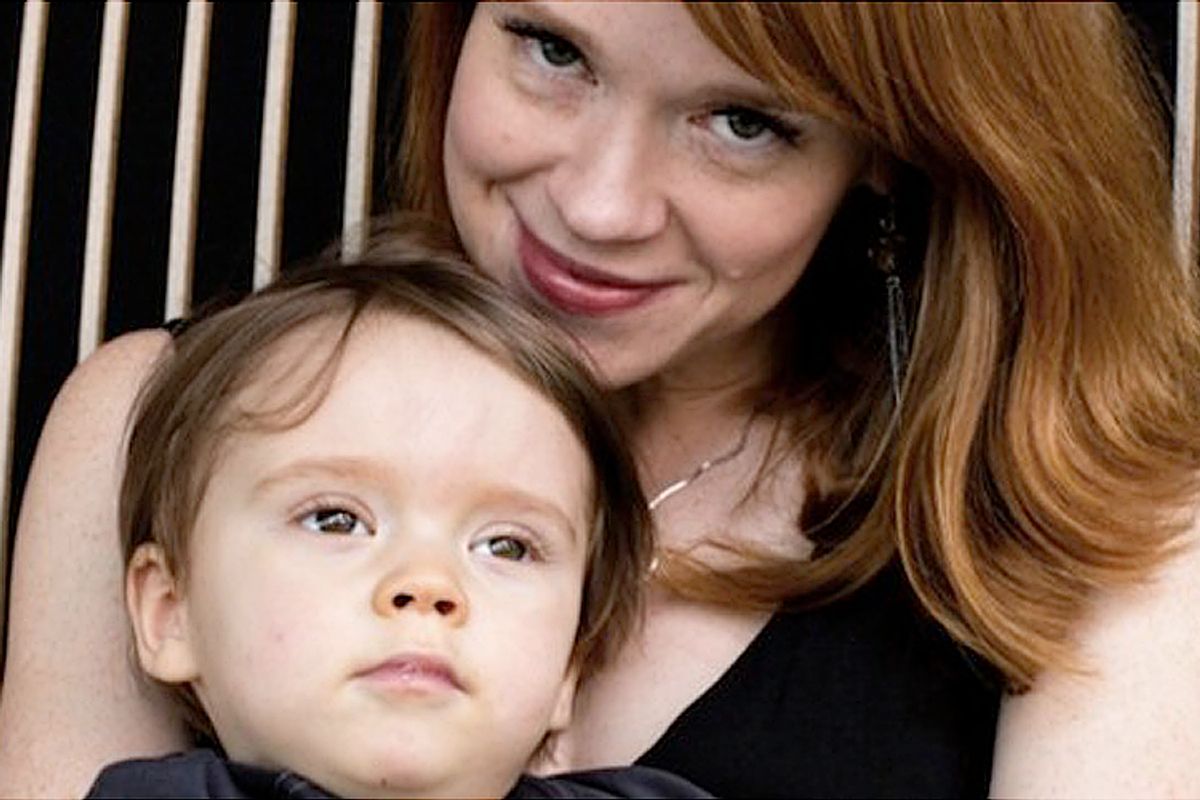 This originally appeared at Role/Reboot.

I’ve been writing about my son Ronan, who died of Tay-Sachs disease in February 2013, since the day of his diagnosis. This has included a discussion of parenting strategies that must accommodate a child’s inevitable death. These have recently been determined by one writer speaking on behalf of the Right to Life organization as “inspirational.”

Although the writer qualifies the use of this sentimentally descriptive word, he goes on to explain that although he has no special-needs children of his own, he has much to say about how other people with terminally ill children should parent. I have an equally sentimental word for that which I will mention here without qualification: gross.

What he fails to mention at the beginning of this reprinted article, which itself was a response to an op-ed piece I wrote in 2011 that appeared in The New York Times, “Notes from a Dragon Mom,” is that my son is now dead.

Although I’m sure the writer would extend sympathy for my loss, that he should reprint this article almost eight months to the day when my child died seems like an opportunity to clear up my thoughts about this issue. I’ve been the poster child for the March of Dimes once in my life; I am not prepared to be so for the Right to Life movement. And I will not let the memory of the beloved child I will never see again be roped into this worldview as well.

The pro-choice versus pro-life debate has always been reductive. It's an issue I have already weighed in on for a piece I wrote for Slate in 2012, which generated some fantastically fascinating hate mail, the most notable condemnation being that I (and Ronan, as well, by virtue of my immoral, twisted mind) would be going to hell as a result of my beliefs.

Here’s the thing: I don’t have beliefs about abortion. Although I have always felt that not supporting a woman’s right to choose is a human rights violation (and is a clear stand against poor women), I would not classify this opinion as a belief. Having belief in anything is a faith statement; it implies a sense of mystery and wonder, and discussions about rights are based on empirically proven facts applied to particular situations.

So I don’t believe in abortion. I instead am of the opinion that it is a fundamental right that women should be afforded. (And here I am obviously making the case that the words “religion” and “Jesus” be left out of the abortion debate entirely, and not just for the reason that the mention of either makes people’s eyes glaze over and halts conversation, although that’s a large part of it.)

Now, is this opinion entirely unclassified? No. And here’s where the life/choice debate has truly suffered. Nobody is prepared to have a both/and conversation about abortion; we only want to speak in binaries: yes or no; this or that; for or against; mine or yours. This would be like a judge passing a verdict before hearing the details of a case.

In the abortion debate, it’s easy to imagine cases that test opinions on both sides. Is it my opinion that a woman with no resources, who cannot care for herself or her child be forced to have that child if she does not wish to and be shamed and attacked if she does not have the child? No.

Is it my opinion that the social and economic structures of our society should support her if she chooses to have that child? Yes.

Do I believe a woman in a committed, healthy relationship should make unilateral decisions about abortion if a partner disagrees with her choice? No.

It is my opinion that women cannot expect men to be equal partners in child rearing or other relationship matters if they are not willing to have conversations about consequences and equal sharing of whatever responsibilities might present themselves. This includes the decision to bring a human person into the world who will require their love, attention and lifelong care. None of these cases presents easy solutions, because there are no solutions. There are only conversations, nuanced and complex.

The problem with the current debate is that it presumes that women are standing alone out in the field of decision-making around the issue of reproductive rights, and it’s no surprise that we feel this way. I can’t think of a scenario where a person—in this case, a woman—is considered more deeply second-class. It is the infrastructure of our social support systems that needs to change. All this barking around about who is "right" or "moral" when it comes to abortion is merely obfuscating this fact.

The write-up about Ronan and me, complete with an endearing photograph, does not reflect reality. Yes, I loved my son. Yes, he was beautiful and sweet and wildly adored. I had resources to care for him (which many parents of special-needs children lack), and I did so to the best of my ability, which included making choices not to extend his life beyond palliative measures. But watching him deteriorate gradually—that slow and terrible fade—was torturous and mind-blowingly stressful.

Even more than that, Ronan suffered. His brain was epically compromised, and his body was doomed. His life became one primarily of suffering shortly after he was born, and it continued until the day of his death. Peaceful, yes, by some accounts (no tubes, no panic or chaos of a hospital, no gasping for breath), but he still died. Anyone who has witnessed the death of a suffering, terminally ill person knows that the body, in the end, is reduced to ugly and terrifying chaos. Angels don't flit about the room, and souls don’t depart without struggle.

When Ronan died he was nearly 3 and he weighed 11 pounds. He was so emaciated that we had to be careful when we moved him that we did not dislocate his shoulders or hips. His eyes were fixed, every bone on his face visible. He died in the middle of the darkest, coldest night of mid-winter. The fact that the sun rose and birds started twittering hours later seemed to me a stunning and singular cruelty.

I don’t write about my son’s death to contribute or even respond in kind to the sensationalist bent of some Right to Life images or publications. I do so to be clear, and so that Ronan’s memory does not have to bear attitudes with which I do not agree. Also, he did not deserve to live or die in the way he did, and had I known his fate through the appropriate prenatal test while I was carrying him, I would have terminated my pregnancy. Would this have been another loss to mourn? Yes. Very much so. That decision never would have been made without careful and agonizing thoughtfulness. No parent can make that decision for any other parent.

To sentimentalize an experience that sent me, my family and many others over the edge of madness and then back again is to view children as conduits through which to “get spiritual,” a notion just as contrary to the true nature of parenting as asking them to be vehicles through which parents live out or attempt to fulfill their own failed dreams. Children do not exist to make their parents feel good about bringing them into the world no matter what their quality of life might be. The idea of this, or that anyone might think of it, prompts me again to use this word without equivocation: gross.

The face of my child is not a billboard for the spiritual quests of parents who must face these hideous choices about whether to let a child live or die and in what manner. Ronan was singular and only and he died miserably. To have seizures, go blind, experience dementia, lose the ability to move and then finally die when the body can no longer process food or liquids—all in the span of less than three years—is not a fate I would wish on any person, least of all the person I was charged with caring for, and whom I loved furiously and intensely.

Yes, Ronan transformed my life in every significant way, and for that I am grateful every day, just as I miss him every second of every day, and just as I am glad he is no longer here, no longer suffering, every second of every day. These feelings and realities exist simultaneously and are not mutually exclusive. Is this reality emotionally comfortable or a situation that might be summed up by a sweet sympathy card with dark birds flying into a fading sunset? No. But it is the truth about life. It’s complicated—too bad this particular debate has not caught up to a reality that is as old as the world.

I can still be grateful for what I learned from my son and from the experience of parenting him, while also saying that not a single moment of that journey is worth salvaging or sentimentalizing if it could, simply, have saved him from any suffering. There’s a scene in "The Brothers Karamazov" in which a character states that nothing—no moral victory, no spiritual enlightenment—is worth the suffering of a single child. Exactly.

My point to those who might read the Right to Life piece—written, I believe, out of the author’s own ardent opinions—is not to mistake what is going on. Do not see the photogenic face of my child before the period of his sharpest decline and the smile of his adoring mother without also seeing the reality that came later: death, devastation, grief, (sometimes shaky) survival.

The parenting strategy I employed, and that this writer correctly quotes, is based on loving and letting go. What he got wrong is that I would have done the letting go—that howling, terrible task—long before the agony that ensued, for me and for my son, and long before the portrait-capturing cameras turned away.