The secret conservative message of the "Duck Dynasty" beards 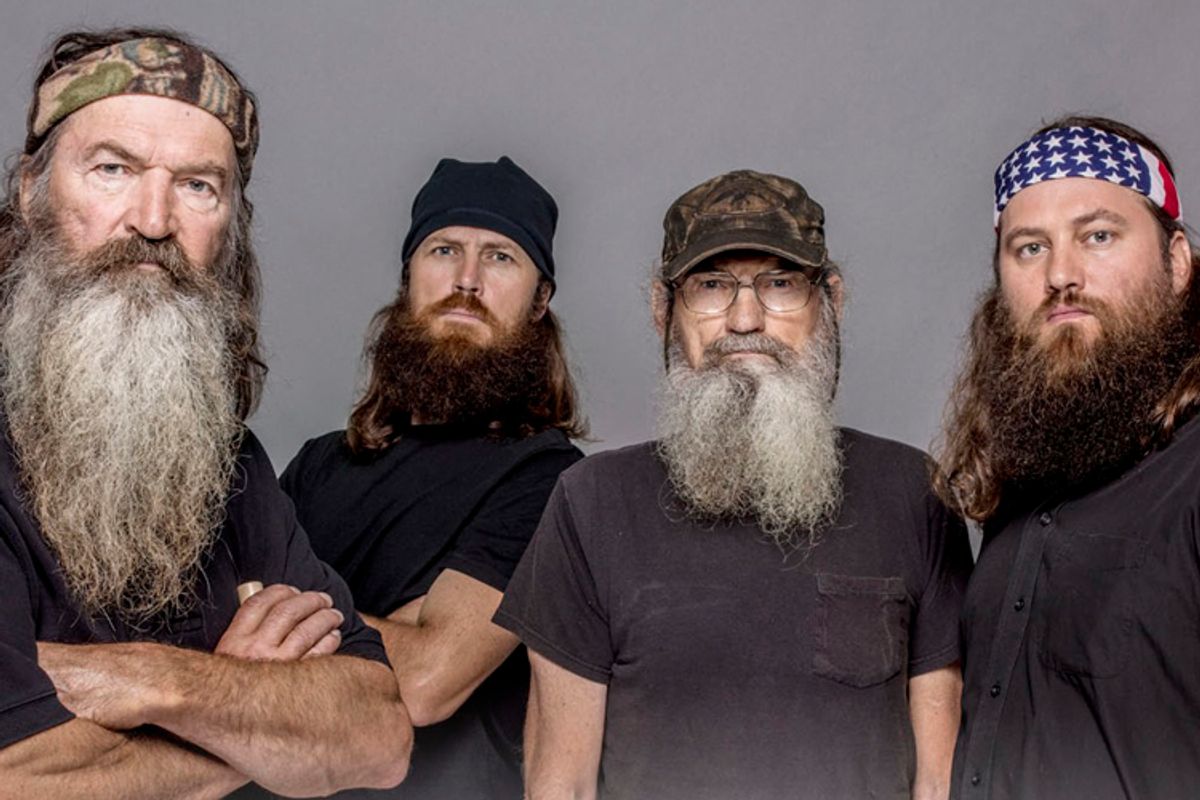 Maybe you're like me and you don't have cable TV. Good for you. Tell yourself, like I do, that this makes you inherently intellectually superior to the millions of glow-box zombified American scarecrows who have nothing better to do with their lives than exist in an immobilized state guarding the TV from the nefarious corvids of real life. Or, you could be honest and, like me, admit that you can't afford cable. But whether or not you have cable, there's no way to escape the current American cultural juggernaut that is A&E's "reality-based" show "Duck Dynasty."

The show follows the exploits of "Duck Commander" Phil Robertson, his Vietnam-vet, eccentric brother Si, and his three sons, Jase, Willie and Jep. The Robertsons live in West Monroe, La. Phil Robertson is a former quarterback for Louisiana Tech who turned down pigskin glory to hand-craft duck calls in a backwoods cabin. According to people who actually care about duck hunting, Robertson's calls work pretty darn well. When Phil's son Willie took over control of the Duck Commander company, he turned it into a multimillion-dollar outdoor empire and made the Robertson clan into self-proclaimed "redneck millionaires."

The show is a massive hit; as of late August, it was poised to be the biggest cable show ever. So why the heck is this the case? After all, like any "reality" show, "Duck Dynasty's" plot lines are transparently staged -- but two things about the show really resonate with viewers: the Robertsons' eccentricity and, perhaps more importantly, their beards.

There's lots to write about regarding "Duck Dynasty" as a cultural phenomenon, but I'm going to focus on the history behind American beards and why that history is essential to the show's success. Over at History Scene, Sarah Gold McBride provides a fantastic historical recap of the power of the beard in terms of shaping masculinity in the 19th century. The 19th century was a period of vast changes during which the modern world as we know it was formed. Indeed, many of the cultural, political, and economic tropes that we acknowledge today were first articulated and solidified in the 19th century, and this includes beards and their relationship to manhood.

As Gold McBride writes, with vast social, political and economic change, women began to take a more active role in public life. This led to widespread male anxiety about gender roles, which in turn fueled the development of the idea of "separate spheres" of influence. “Under this schema,” she notes, “men laid claim to public places like taverns and city streets, while women were confined to private spaces — namely, the home.” Rather than being a realistic description of gender roles, however, the notion of "separate spheres" instead provided a largely symbolic reaffirmation of idealized male and female divisions. Such theoretical gender distinctions appealed to men seeking to uphold their masculinity in distinctively visual ways. These distinctions included the realm of truly epic beard growth. Thus, in the 19th century, beards came to define a concept of manhood in a way that was unmistakably visual to better distinguish men from increasingly public women in an era when, Gold McBride observes, “traditional markers of masculinity were no longer stable or certain.”

So what does the rise of beards in the 19th century have to do with "Duck Dynasty's" popularity in 2013? Much of the show's popularity stems from its carefully controlled depiction of very generic, supposedly "down home" southern American values like family, Christian religious observance, traditional gender roles, patriotism, humility, good manners, reverence for the outdoors and general redneck-ness. Thrown together in a pot, these values create a simmering, clichéd stew of good ol' folk Southern identity that harks all the way back to the antebellum South. At that time, divisions over slavery led Southerners to double down on cultural distinctions between themselves and the North in an effort to mark out Southern values as superior.

Minus the slavery issue, of course, the above-listed generic stew of Southern cultural values survived well into the 20th century because these values seemingly offered an authentic alternative to the fast-paced, modern, industrializing nation that emerged after the Civil War. As historian James C. Cobb observes in "Redefining Southern Culture: Mind and Identity in the Modern South," culture is a process, and in the post-Civil War South, Southern culture was "an ongoing cycle of interaction" during which some Southerners constantly shaped, reshaped, and reformed Southern cultural identity to adapt older traditions to the demands of modern life. This redesigned Southern identity sought to simultaneously combat and accommodate the social change that threatened to leave Dixie and its culture in the dust. The South's general cultural, political, and religious conservatism aided this continuing process.

Now, in the 21st century, the vague idea of "Southern culture," defined by traditional religion, gender roles, guns, family values and patriotism, has been mass-produced and sold via shows like "Duck Dynasty." The show is consumed by a large segment of the American public that is fed up with what they perceive as the modern world's assault on traditional values and religion. These viewers are willing to commit their time to a little slice of supposedly authentic Southern American-ness to combat the secular hordes of social reformers roaring at tradition's gates.

The beards in "Duck Dynasty" symbolize this general, supposedly authentic, but actually mass-produced, Southern cultural conservatism. As Gold McBride noted, 19th century beards symbolized masculinity and an affirmation of gender distinctions in an age when gender roles were shifting. Contemporary America is witnessing many of the trends that shaped the 19th century, including growing income inequality and movements by various minority groups to claim their human rights.

"Duck Dynasty's" bearded male stars offer a symbolic reaffirmation of traditional values onto which many Americans threatened by social change can latch. The Robertson men's bushy beards, like beards in the 19th century, distinguish them from the Robertson women and symbolize Southern masculinity. Just look at the hirsute Robertsons' favorite things: they do manly activities like hunting, fishing, shooting guns and praising God. Hell, their entire business is built around the idea that men hunt to bring home food and take care of the family.

And what distinguishes all of the bearded Robertsons' activities? For the most part, they happen outdoors, that is, outside the sphere of the home, where the Robertson women reside. When Jase or Willie or Jep returns from a day’s work at the "Duck Commander" headquarters or a day out hunting, he returns to the home sphere to meet the women. There was even an episode where Jase and Willie took their wives hunting, and, in a fantastically clichéd plot line, the thoroughly suburbanized and homebound ladies act the part of ducks out of water, unable to fathom how their manly, bearded beaus could possibly derive joy from going into the woods to shoot deer. And just so viewers don't forget: these are indeed real men -- they have beards. Bushy beards.

"Duck Dynasty's" bearded display of warm, cornpone, conservative but non-threatening, down-home, Southern cultural values resonates with a portion of the American population. Conservatives have taken to declaring that the show's popularity drives liberals crazy, while Christians praise the show as an antidote to the ills of modern culture via its depiction of warm, simple, family values. The Robertson men's beards alone do not a successful show make. But their beards do symbolize and invoke a long history of cultural construction based around generic Southern American values served up hot and ready to many Americans. These folks want a little something simpler in their lives to combat what they see as a host of uncomfortable modern social changes. For better or for worse, this is the power of beards.