Nigella Lawson declares her feminism -- and gets roasted in the press 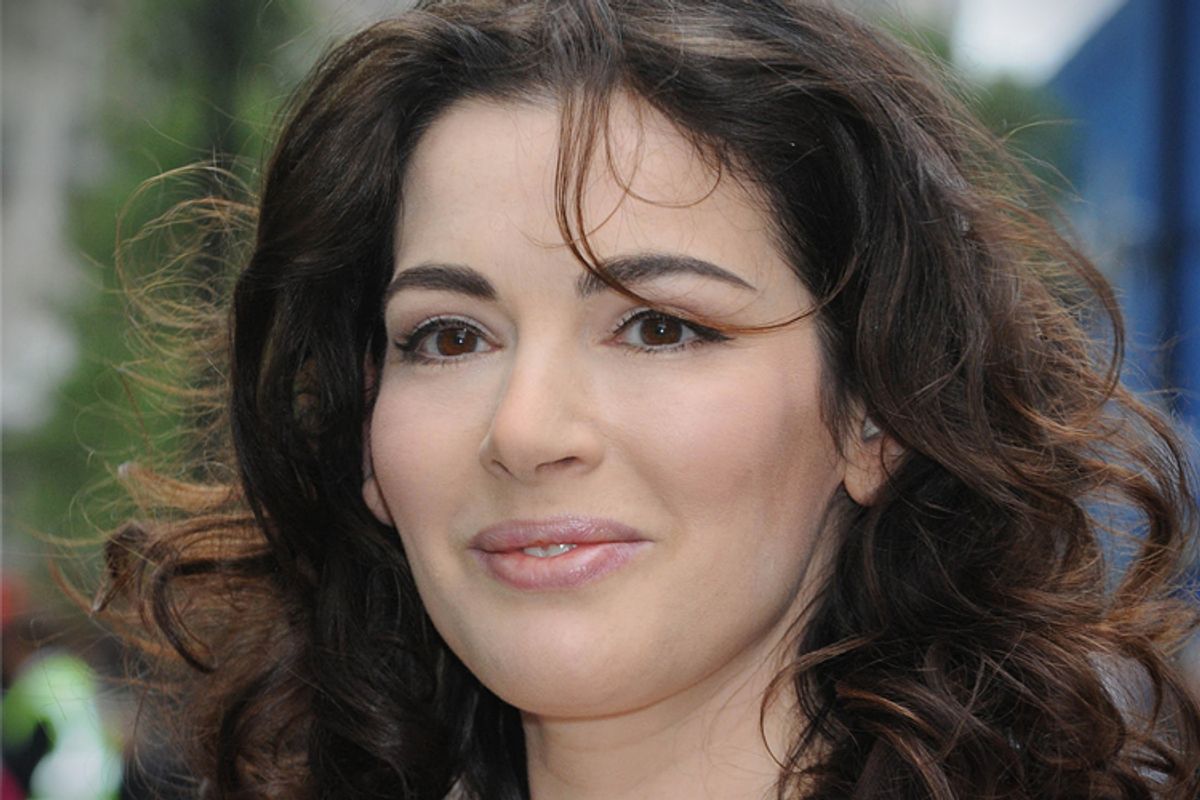 Nigella Lawson makes no bones about her feminism. In a Sunday newspaper interview this week, the famed English author and cook stated she's "baffled" anyone would even ask her about it, and that it's "self-evident" she is. But maybe the reason journalists feel the need to keep asking has something to do with how her statements tend to be spun out in the British media. Were the headlines this week that a successful one-woman brand is proud to call herself a feminist? Nope, they were that she's "blaming the feminist revolution" for deteriorating culinary skills.

Here's what the reliably terrible Daily Mail called an "unexpected outburst" in which she "blames feminism." In her interview, Lawson said, "Feeling comfortable in the kitchen is essential for everyone, male or female. At the time it seemed so many people were fearful of cooking, and that meant home was never more than a stop-off from work. Women of my generation were keen -- rightly -- not to be tied to the stove, but the ramifications of this were that they felt a sense of dread in the kitchen. How can this be good for anyone? I also feel that to denigrate any activity because it has traditionally been associated with the female sphere is in itself anti-feminist." Wow, what a traitor to the cause.

It wasn't just the Daily Mail that seized upon the words "feminism" and "dread." Monday's Metro ran with that version of the story, opening with the interesting interpretation that: "Feminist attitudes stop women from feeling confident in the kitchen, Nigella Lawson has claimed." The Evening Standard likewise claimed, "I blame feminism for making women dread the kitchen, says Nigella Lawson," while the Express announced, "Feminism made women feel 'a sense of dread in the kitchen' says Nigella Lawson." And the International Business Times really ramped it up by stating, "Nigella Lawson: Feminism Makes Women Feel Guilty and Affects Cooking Skills."

Lawson is accustomed to having her words and her persona willfully misconstrued. She cheekily named her baking cookbook "How to Be a Domestic Goddess" -- and has been living it down ever since. Two years ago, she explained, "Baking is the less applauded of the cooking arts, whereas restaurants are a male province to be celebrated. There's something intrinsically misogynistic about decrying a tradition because it has always been female. I'm not being entirely facetious when I say it's a feminist tract." Now, her important and utterly correct assertion that "Feeling comfortable in the kitchen is essential for everyone, male or female" has been tidily ignored in favor of the far more sensational ploy of making it seem like a working woman is putting down feminism. What an insulting, cynical stunt.

Lawson is smart enough to understand what her critics don't – that being in possession of the skills it takes to make a cake is not a negation of a woman's independence or intelligence -- or a man's. We are a generation that cooks less than our parents and grandparents; that's just a fact. And the argument that it is somehow a great cultural sin to be laid at the feet of feminism is a frequently trotted-out one. Caitlin Flanagan has carved out a whole career by doling out fascinating historical facts about the early feminist movement like, "Cooking nourishing dinners was an oppressive act." Food writer Michael Pollan has written that cooking is an art "that some American feminists thoughtlessly trampled in their rush to get women out of the kitchen." And food writer Rose Prince, weeping for "the gentle art of feminine food," blames feminism for the rise in childhood obesity. World, as a feminist, I for one would like to apologize right now for giving your kids diabetes as I TRAMPLED out the door to get an education and hold down a job.

Crazily enough, here in the industrialized, 21st century world, where nobody has to be the designated bison hunter and nobody has to be the de facto non-poisonous berry gatherer, food preparation actually doesn't have to be a gendered act. Men and women work; men and women can cook. They should. Whatever you want to believe went down in the '70s that somehow led to our cultural epidemic of culinary incompetence, we all need to know now how to boil a little water. Writing in Jezebel last week, the always great Erin Gloria Ryan urged, "Be a Goddamn Adult. Learn to Cook." As she puts it, "It feels good to take care of yourself! It feels good to save money by making your own food, taking care of your own home, understanding your own basic finances." And she echoes Ruth Graham, who last week called for schools to reinstate the old-fashioned Home Ec class, with a new twist: "A forward-thinking new kind of class that would give a generation of young people—not just women, but everyone—the skills to shop intelligently, cook healthily, manage money, and live well."

Feminism didn't kill cooking. If you, as an adult human or either sex walking around and eating food in this day and age, don't know how to cook for yourself or your loved ones, that's a failure on your part, not the women's movement. And Nigella Lawson, a woman who has argued convincingly that baking can be a radical act, isn't "blaming" feminism for anything. There's the kitchen; that thing against the wall is called an oven. Figure it out.