The Tea Party and big business want the same things

The only major divisions in the Republican coalition are over tactics, not policy 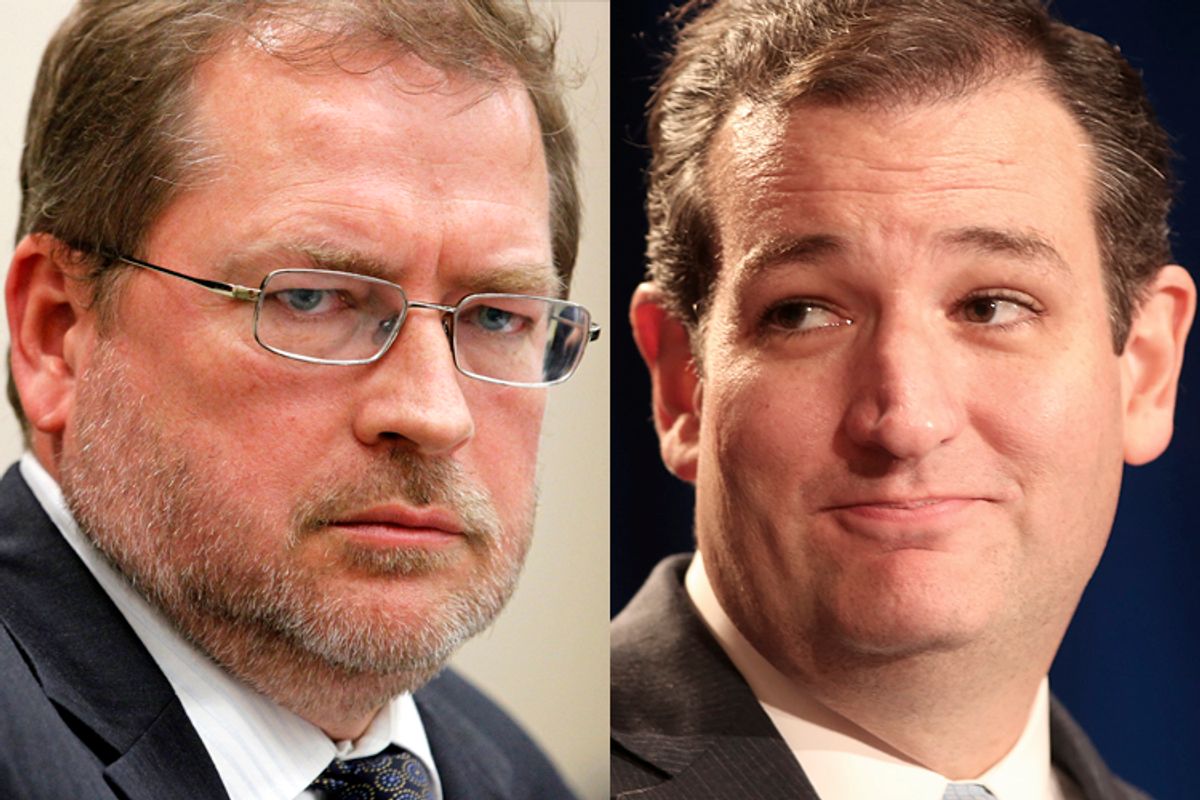 Dave Weigel patiently explains today that there isn't actually a brewing war between "the Tea Party" and Wall Street and "the business community." There is, really, just the same fruitful alliance that birthed the Tea Party. Because as long as "the Tea Party" means "Republicans in control of the House," that means "Democrats not in control of the House." Which is good for business! (In a very dumb and short-sighted way, mostly.) As Weigel says: "No one’s looking to primary the average Class of 2010 Republican because he’s trying to repeal Dodd-Frank or challenge EPA rules or prevent any changes in tax law that would anger the donors."

And "big business," in the form of the Chamber of Commerce and other business-backed groups, has spent and will continue to spend a small fortune electing Republicans, including "Tea Party" Republicans, in order to help Republicans, including "Tea Party" Republicans, maintain control of the House and possibly take over the Senate. The shutdown and the default showdown didn't stop that. There is still one party that is very committed to rolling back environmental and other regulations, preventing meaningful financial reform, and, most important, keeping taxes as low as possible on very wealthy people and corporations. The Tea Party is not opposed to any of those things.

There are really only two issues dividing "the business community" from "the Tea Party." They are a) tactics and b) immigration. "The business community" wants the Republican Party to be competitive in national races -- they're also fine with the Republicans' trying to win elections through gerrymandering and voter suppression -- while "the Tea Party" prioritizes purity over electability. (In fact, most of them don't see conservative purity as any sort of obstacle to electability, but they are wrong.) The backlash to Ted Cruz and the House "suicide caucus" was mainly a reaction to tactics, not a blow-up over policy.

Conservatives simply differed over the best way to force Democrats into accepting the roll-back of the Affordable Care Act and/or a tax-cutting, social insurance-cutting long-term budget deal. Plenty of "establishment" Republicans still believe it is perfectly appropriate to use the debt ceiling, and the implicit threat of default, to extract policy concessions. Where Republicans split was on the wisdom of actually shutting the government down or merely threatening to, and on what precisely to demand in exchange for reopening the government. Grover Norquist attacked Ted Cruz for demanding the unachievable, but he doesn't actually oppose defunding Obamacare. He just thought Paul Ryan had a better strategy for actually winning concessions. (Grover Norquist is right, by the way.)

Where there could actually be a break of some kind is in next year's primaries, when Tea Party groups will fund some less-electable candidates against perfectly conservative members with more realistic grasps of the achievable. But if the Tea Party groups win those primaries, big business will still support their candidates. (The Chamber of Commerce donated to Mike Lee and Allen West in 2012.)

The biggest problem with the moderate fantasy of a new Moderate Republican rising from the ashes of Ted Cruz is that "big business" isn't going to force the "Tea Party" to moderate its positions, it's going to fight to get them to fight for their positions more effectively. People opposed to the goals of the Tea Party movement should be even more opposed to the business community reasserting control over the party. The end result of the "grown-ups" stepping in to squash the Tea Party would be more power to people like ... Mitch McConnell, the man who's done more than anyone else to block Barack Obama's agenda. The actual policies being fought for, with few exceptions, wouldn't change.

The one major issue where there is actually tension between the bottom-line priorities of the donor class and the desires of the activist movement is immigration. There are many obvious reasons why big business would prefer looser immigration restrictions, more guest workers and visas for "highly skilled" immigrants. But for a popular movement still fueled by the tribal panic of aging whites, "more immigrants" is not a winning message. (It's also true that "the donor class" is much more socially liberal than the grass-roots activists, but same-sex marriage isn't enough of a profit-booster to make it a fight worth having outside the "blue states" where it's already popular.) Even on immigration, smart representatives of the donor class seem to be suggesting that they believe it's better to let activist conservatives have their way than to create a genuine split in the party. Because what's good for Republicans is good for rich people.

That will still be true in 2014 and in 2016. And that's why when the next presidential election rolls around, the conservative grass roots and the money will fall in line behind whichever guy the GOP nominates, even if they disagree about him at first.