Evil D.C. mastermind feels a lot like Lanny Davis to us. We posed the question to the brilliant actor playing him 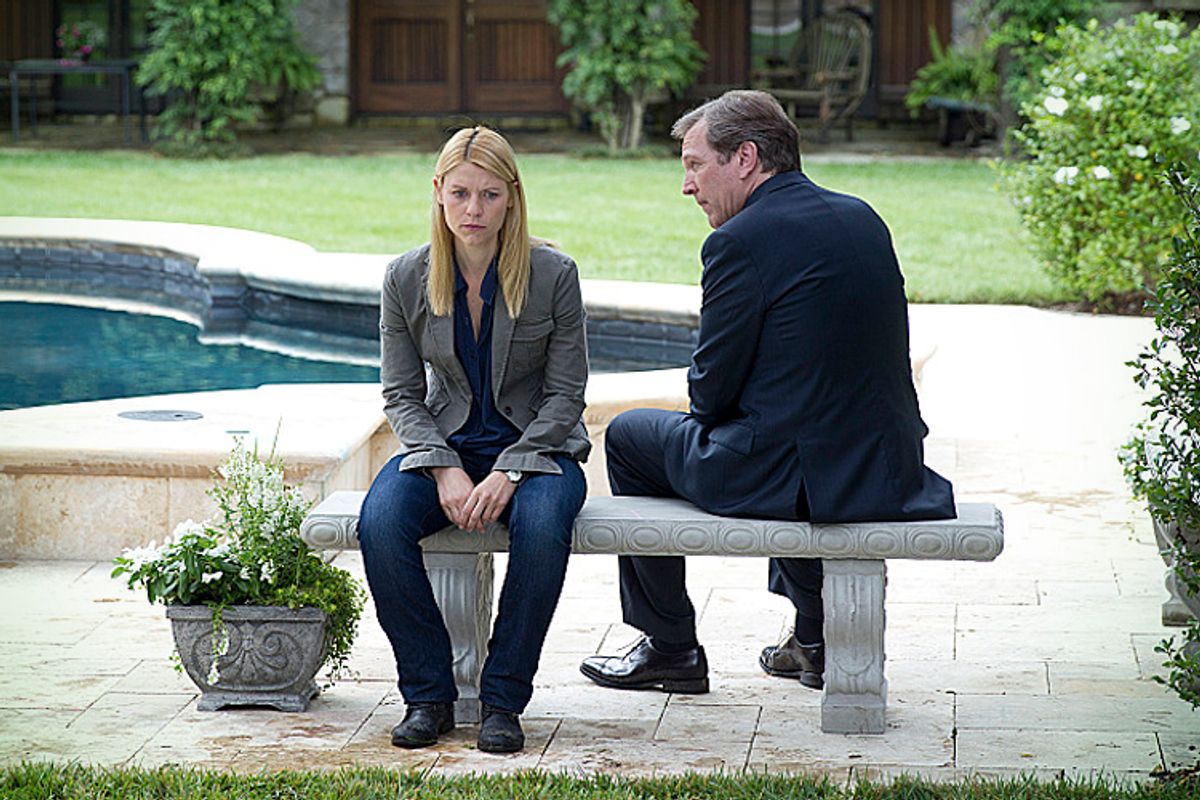 Martin Donovan -- the brilliant actor first acclaimed two decades ago for his starring turns in Hal Hartley's films "Trust," "Amateur" and "Simple Men" -- has most recently been elevating premium cable shows like "Weeds" and "Boss" with his intense presence.

On Sunday, he made his debut on "Homeland" as Leland Bennett, a mysterious Washington lobbyist and power player -- warning, lots of spoilers ahead, starting now -- working for the Iranian terrorist mastermind behind the deadly bombing at the CIA. Bennett, recognizing an opportunity with the CIA appearing to turn on Claire Danes' character Carrie Mathison, tries to work her for inside information.

Bennett is the kind of Washington player who works only for his next paycheck. He reminded me of no one more than the ever-unctuous and repugnant Lanny Davis, whose client list of dictators and evildoers recently expanded to add the hated Alex Rodriguez.

Donovan's been a must-watch for years, and we got him on the phone yesterday from Vancouver to talk through his character -- and to pose our Lanny Davis theory.

So we meet Leland Bennett in a really explosive and terrific scene. The key line that summed it up for me was when you're trying to convince Carrie to turn on her employer and her country. She thinks she'd be a traitor. And you make the case that you're a professional making an argument, and only the naive believe in the rightness of working under a flag -- that the people she thinks she's defending are actually in the process of selling her out.

Depending on your orientation -- politically, socially -- you can follow this whole series and align yourself in different ways. You know, people have different relationships with power. I suppose a large portion of the "Homeland" audience aligns with the U.S., sort of against the enemies. We certainly have the CIA viewpoint on the world -- and it’s their job.

In playing the role now of a guy who steps in and who is representing quote-unquote “the enemy” or the quote-unquote “bad guy” -- and I use these terms carefully -- whenever I play a quote-unquote "bad guy," I cannot make any judgments about him. I can’t align. It’s just basic acting 101, Stanislavski stuff. What are his basic needs? What is his point of view? What is he trying to do? Without making any judgment. And I’ve played some pretty despicable people.

You know, even the most despicable have their reasons. You can’t judge who you’re playing. So that was a perfect line for me to have as that guy, because that’s how he works. And I think anybody who is working in these worlds – I don’t care which side you’re on, you’re CIA or U.S. or Iranian or whatever. Name your nation-state, or tribe or party – you have to rationalize what you’re doing. You have to go to sleep at night. Does Dick Cheney sleep at night? Does he sleep like a baby?

Watching his interviews this week for his new book, it seems like he has no problem at all, somehow.

Yeah. This is a fascinating thing for me both personally and being an actor. I mean, how do people function? How do people who we stand back and see doing horrible things – how do they live with themselves? You know?

The interesting thing on "Homeland" is you have people doing despicable things on both sides.

Brody's entire orientation on the world turns around because of the way an American drone strike killed a boy. There was an echo of that earlier this season, when Quinn shoots and kills the son of a target. Not a lot of good guys, even on the side much of the audience is presumably rooting for. A character like yours is almost refreshing: He admits he's making an argument and doesn't try to cloak himself in patriotism or rightness.

Yes, and in a way he thinks it absolves him of responsibility, but you know, most of us wouldn't see it that way.

It's complicated: On one hand, there is this entire awful cottage industry in Washington of power players and former officials who lobby and cash in on behalf of despicable dictators.

And on the other hand, unlike many of those influence peddlers, your character doesn't carry a sense of American exceptionalism or innocence. He argues to Claire Danes that Iran's actions are directly linked to American aggressive actions ...

It’s also the notion of, you know, the defense attorney who’s defending a serial killer. I’ve heard, for instance, that criminal defense attorneys swear that if their client was actually guilty that they wouldn’t try and get them off. And that their clients never actually admit to the crime. So they tell themselves that, you know, “If I knew for a fact that this guy was guilty I wouldn’t defend him.” But I would find that argument hard to believe.

Did you have a certain Washington insider, or revolving door power-player in mind when you thought about the character.

Yes. ("Homeland" executive producer) Alex (Gansa) and I did. I threw out a name and he said, "Yeah, that would be good" -- but I don’t want to mention who that is. (laughs)

I think it's Lanny Davis!

Wait, did you say Lanny Davis?

Yes. Who's worse than Lanny Davis?

I didn’t say that. You said that. [laughs]

I'm right! I knew that was the guy.

Oh, that’s really funny. Tell me about working with Claire Danes in that scene. It's a pivotal scene for her -- the audience doesn't know until later in the episode that she's playing a double or triple game here. That's a lot of pressure: She has to convincingly make viewers believe she's desperate enough to help Iran, to convince your character that she is sincere, and to spin him at the same time he's trying to flip her.

Claire's dealing with about nine levels at once. And that’s what was amazing because she, like you just described, is working and juggling so many things -- plus her illness. There were so many things going on. I mean, it’s a great role for her, and it’s quite an amazing thing to watch her try to process all that information and make the choices – because, you know, she has to make choices, all of us do, on what to present at any millisecond. She has a lot of options.

Are you able to tell us how long this character will be on the show?

You came up through the independent film world of the '90s, and in some ways it feels like TV has supplanted that world -- there are all these premium cable dramas and comedies people can binge-watch without leaving the house. The film world's in a difficult place, trying to get smart, independent films made and viewed these days. Other than the obvious prestige Oscar bait, it feels almost impossible.

Yeah, it’s a completely different world. There’s a whole bunch of people trying to figure out what happened, and trying to chart a new path. Ted Hope's blog is a good place to go to see all the ferment – he cross-references what everyone is trying to do. So, I don’t think anybody has an answer for what’s going on, but it has all shifted, it’s all economics. Different modes of viewing and delivery systems.

As an actor, how do you feel about this? Television's so much better -- but if you want to make movies, to star in movies, it feels nearly impossible. So you can appear on "Boss" and "Homeland," but actors must also mourn for this other film world.

No, I absolutely agree. There’s no question that television's better, like you said. The writing for film isn’t as consistent -- the writers have all migrated to TV, because they can’t get their movies made. Nobody’s making those kinds of films. That’s not to say that there aren't interesting films being made; there’s a lively film festival circuit. But Ted Hope has been a friend and collaborator for a long time, and here's how he broke down independent films for me: Independent film is $10-15 million-budget Oscar bait, or it's $3 million with an actor who has been in a film that has grossed $100 million or more, or it's a budget under $500,000.”

So that’s where independent film is. And I think that’s as good an assessment as any that I’ve heard.

When I was coming up with the Hal Hartley films, I was cast as a no one. I had no name visibility. I was working at a downtown post-performance-art, avant garde theater company and doing a couple things on television. But I was a total unknown. Now, if that was today, you’d have to go get, you know, Joaquin Phoenix. You’d have to get somebody famous.