Tea Party is an anti-populist elite tool. And it has progressives fooled

This is not some spontaneous uprising. It's the newest incarnation of a rich, elite, right-wing tradition 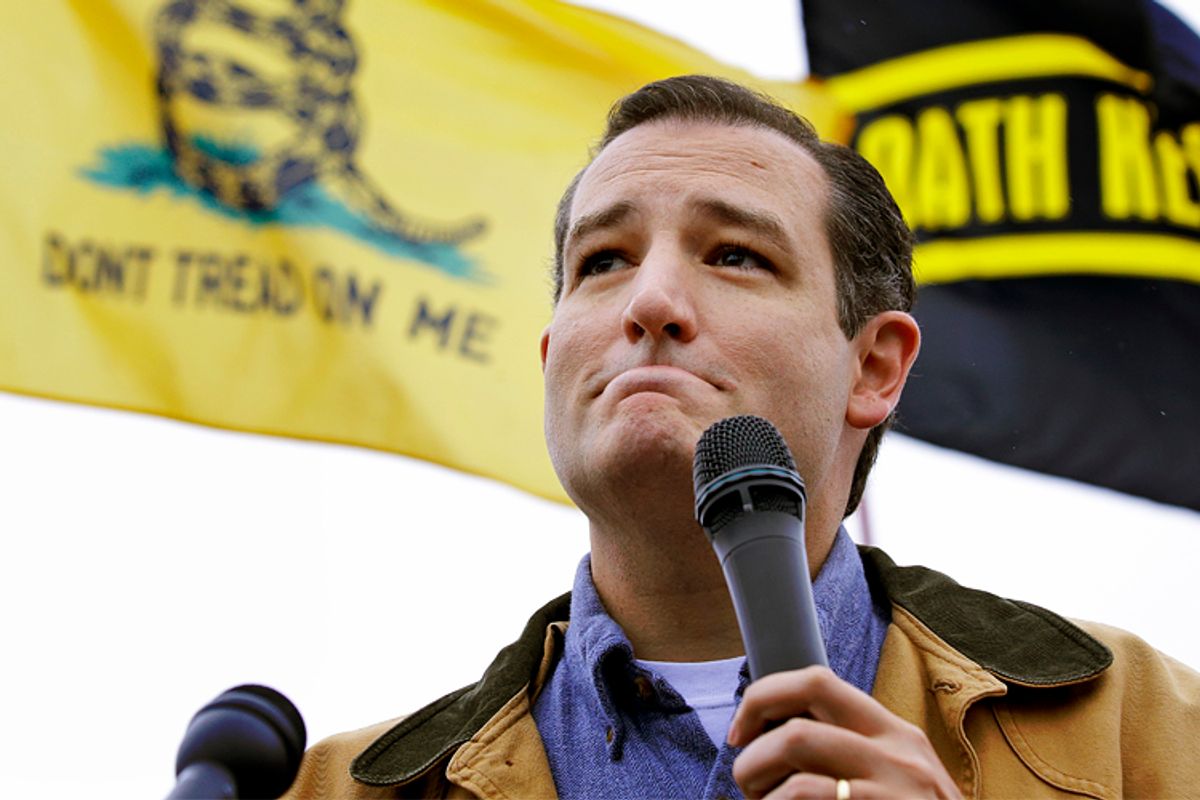 In recent essays for Salon I have argued that progressives and mainstream pundits are making a profound mistake by treating Tea Party radicalism as an outburst of irrationality by moronic “low information” yokels, rather than understanding it as a calculated (if not necessarily successful) strategy by the regional elite of the South and its allies in other regions. In an Op-Ed for the Wall Street Journal titled “The Tea Party and the GOP Crackup,” William Galston presents data that reinforces this conclusion:

Many frustrated liberals, and not a few pundits, think that people who share these beliefs must be downscale and poorly educated. The New York Times survey found the opposite. Only 26% of tea-party supporters regard themselves as working class, versus 34% of the general population; 50% identify as middle class (versus 40% nationally); and 15% consider themselves upper-middle class (versus 10% nationally). Twenty-three percent are college graduates, and an additional 14% have postgraduate training, versus 15% and 10%, respectively, for the overall population. Conversely, only 29% of tea-party supporters have just a high-school education or less, versus 47% for all adults.

I have also argued that the Tea Party is not a new movement that sprang up as a result of spontaneous populist anger against Wall Street bailouts in the Great Recession, but rather the “newest right,” the most recent incarnation of an evolving right-wing tradition that goes back beyond Reagan and Goldwater to mostly Southern roots. Galston notes the high degree of overlap between the Tea Party and mainstream Republican conservatives:

Nor, finally, is the tea party an independent outside force putting pressure on Republicans, according to the survey. Fully 76% of its supporters either identify with or lean toward the Republican Party. Rather, they are a dissident reform movement within the party, determined to move it back toward true conservatism after what they see as the apostasies of the Bush years and the outrages of the Obama administration.

Against progressives and pundits who insist on blaming the white working class for Tea Party radicalism, I have argued that the radical right agenda serves the interest of the economic elites of the South and some areas in the Midwest and other regions — particularly those whose business models are threatened by unions, high minimum wages and environmental regulations. Here, too, Galston understands what most commentators miss:

Many tea-party supporters are small businessmen who see taxes and regulations as direct threats to their livelihood. Unlike establishment Republicans who see potential gains from government programs such as infrastructure funding, these tea partiers regard most government spending as a deadweight loss. Because many of them run low-wage businesses on narrow margins, they believe that they have no choice but to fight measures, such as ObamaCare, that reduce their flexibility and raise their costs—measures to which large corporations with deeper pockets can adjust.

I have high regard for Galston’s abilities as a political analyst, and no small regard for my own. But this is not rocket science. All of this has been obvious to anyone who bothered to examine the polling and voting data, since the term “Tea Party” first entered the national dialogue following the crash of 2008.

Why, in the face of all of this evidence, are so many progressives and pundits convinced that the white working class, rather than affluent and educated conservative elites, are the driving force behind the right? Why do so many American progressives blame the masses for a movement of the classes? The answer is that the American center-left has been misled for half a century by the bad scholarship of the historian Richard Hoftstadter (1916-1970) and by German Marxist emigres of the Frankfurt School.

In the U.S., as in Western Europe, coalitions of populist farmers who united with organized urban workers were the social base of progressive movements like the New Deal. This was recognized by the liberal historians of the 1930s and 1940s, who tended to celebrate the contribution of populism to the evolving New Deal tradition.

Throughout the progressive and New Deal eras, to be sure, urban American intellectuals like H.L. Mencken tended to despise rural people, in every country; Mencken despised European “peasants” as much as he despised the provincial American “booboisie.” Hoftstadter infused Menckenseque contempt for rural and working-class Americans into postwar intellectual liberalism, by means of influential books like "Social Darwinism in American Thought, 1860–1915" (1944); "The American Political Tradition" (1948); "The Age of Reform" (1955); "Anti-Intellectualism in American Life" (1963). By emphasizing genuine examples of racism and anti-Semitism among agrarian Populists, without pointing out that these biases were widely shared among American Anglo-Protestant elites who often despised the Populists, Hoftstadter convinced several generations of American college students and professors that the Populists were a kind of incipient fascist force. By the 1960s, all too many American liberal intellectuals looked at their working-class fellow citizens and saw, not the heroic workers of the new Deal era murals, but peasants with pitchforks and proto-Nazis.

Many mid-century liberal intellectuals blamed first McCarthyism and then the rise of the Goldwater-Reagan movement on a deranged white working class. They found confirmation for this theory not only in Hofstadter but also in "The Authoritarian Personality," a 1950 collection of essays by sociologists led by Theodor W. Adorno, a refugee from Hitler who had been part of the “Frankfurt School” of Marxist sociology. As Jon Wiener has explained:

The Age of Reform was framed around the theory of “status politics,” which came from an essay by German sociologist Max Weber, published in the United States by Hofstadter’s Columbia colleague and friend the radical sociologist C. Wright Mills. Hofstadter’s “status politics” thesis held that the Populists were driven to irrationality and paranoia by anxiety over their declining status in an America where rural life and its values were being supplanted by an urban industrial society. Populism, in this view, was a form of reactionary resistance to modernity. Here Hofstadter was the Jewish New York intellectual anxiously looking for traces of proto-fascism somewhere in middle America. He saw Joe McCarthy as a potential American Hitler and believed he had found the roots of American fascism among rural Protestants in the Midwest. It was history by analogy—but the analogy didn’t work.

The scholarship of Adorno and Hofstadter has long been discredited. In the case of Germany, the historian Michael Mann has demonstrated that National Socialism was widely supported by Germans of all classes, including elites. During the 1930s, the would-be leaders of American fascism tended to come from the American elite, including Lawrence Dennis, a Harvard-educated foreign service officer, and Philip Johnson, an upper-class trust-funder who later became the most celebrated American architect of the second half of the 20th century. Johnson’s fling with fascism in the 1930s became a scandal in his later years. An “embedded reporter” with the Wehrmacht during its invasion of Poland, considered a reliable American friend of the Nazi regime, the young Johnson wrote: “The German green uniforms made the place look gay and happy. There were not many Jews to be seen. We saw Warsaw burn and Modlin being bombed. It was a stirring spectacle.”

Recent scholarship on Goldwater-Reagan conservatism has demolished the idea that it represented a rebellion by disoriented yahoos. Indeed, in 1984 Reagan took 62.7 percent of the college-educated vote, compared to Walter Mondale’s 36.9 percent. Working-class “Reagan Democrats” notwithstanding, Reaganism was a revolt of the privileged against the New Deal order that had been built by the farmer-labor alliance in coalition with middle-class progressives.

Today as in the Reagan era, the Democrats are the more downscale, less-educated party, while the Republicans tend to win the votes of educated and affluent white Americans. In 2012 Romney received the votes of 52 percent of college-educated white women and 55 percent of college-educated white men, losing only the tiny sliver of whites with post-graduate degrees like university professors.

While white voters of all age groups preferred Romney to Obama, the propensity of whites to vote for Republicans rises with income. According to the Public Religion Research Institute, “Among whites without a college degree, income has become a stronger predictor of the vote over time. But actually it’s those with less income, not more income, who are more likely to support Democratic presidential candidates. And again, there certainly no trend by which whites with below-average incomes and no college degree become more Republican.”

The white working class is pretty evenly divided among Democrats and Republicans in the Northeast, Midwest and West — only in the South are working-class whites overwhelmingly Republican.  It is the Southern white working class that skews the voting statistics and culture-war issues like “God, guns and gays,” on which white Southerners of all classes tend to be more conservatives than whites in other regions.

In general, the American white working class is as liberal on economic issues as it was during the New Deal era — and far more progressive than many of the socially liberal billionaires who finance the Democratic Party of Clinton and Obama:

In light of all of this, it comes as no surprise that identifying the Tea Party with the white working class is a mistake:

If it wants to live up to its claim of being “the reality-based community,” the American center-left needs to dispense with the half-century-old anti-working-class mythology of Hofstadter and Adorno and look at real-world electoral and opinion data, for a change. By refusing to recognize that today’s right-wing radicalism serves the interests of elites — in particular, Southern elites — and blaming it erroneously on the non-Southern white working class, progressives only harm themselves, not least by confusing their enemies with their potential allies.