"The Goldbergs" creator: The '80s were "the last time the world was simple"

Adam Goldberg on how parenting has changed since the '80s, and how his show differs from "The Wonder Years" 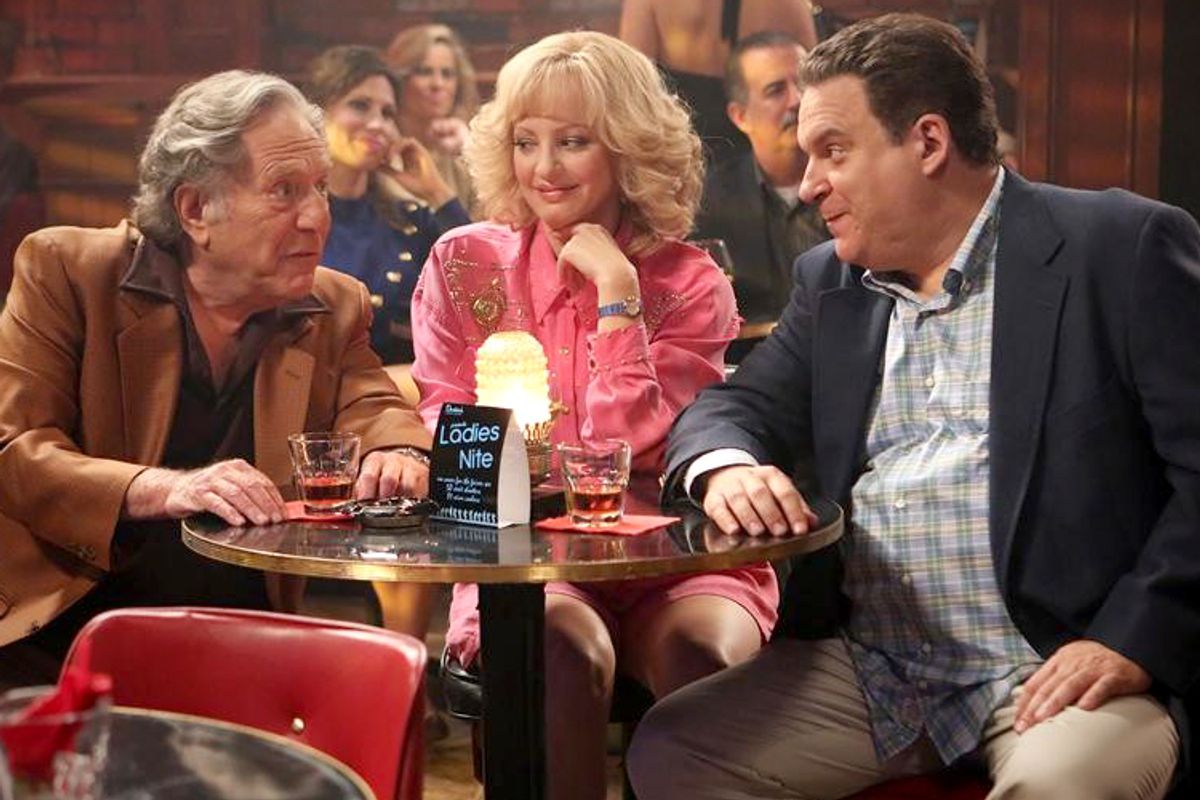 As a 1980s kid growing up in the suburbs of Philadelphia, my buddies and I knew one thing for sure: We were all morons. We knew this because Adam Goldberg's dad, Murray, told us so every time he caught us making one of our silly improv movies with his son's camcorder. In fact, he didn't just tell us we were morons, he yelled it. And then we laughed at him. Such was life growing up as one of Adam's pals on the real-life version of what's now become the ABC comedy "The Goldbergs."

If you've watched the new show, you know one of its distinguishing characteristics is its volume -- and I can personally attest that what you see on TV is actually quieter, more reserved and less ridiculous than what was happening in Adam's house a quarter-century ago. Some of the show's family dynamics are shocking by today's standards, as is the larger cultural environment that was the norm in the 1980s.

Clearly, both Adam and I were deeply affected by the time: I wrote a book about the political and cultural influence of the 1980s, and he now has an autobiographical TV series about his youth. I recently chatted with him about "The Goldbergs," the power of nostalgia and how childhood has changed since the era of the Rubik's Cube. What follows is a lightly edited transcript of our discussion.

Why do you think audiences will be interested in a family show specifically set in the 1980s?

I think the '80s works for a TV show because it’s the last time the world was simple. It was before the Internet really changed everything and made the world really small. Today the whole notion of family is a bit different: You can reach out and if you don't get any support at home, you can find a like-minded family on blogs or on Facebook. In the '80s your family was the people in your house, at your dinner table, and the people you went to school with, those were your friends. You basically couldn’t find other friends. So it was really the last time where the world was still simple and small.

What about right now made a 1980s show the right fit for network television?

It just felt like the right time. In the 1970s, you had "Happy Days" about the '50s. Then in the 1980s, you had "The Wonder Years" about '60s. And then you had "That '70s Show" in the late '90s and early 2000s, so it just seemed like the next step is the '80s. And there hasn’t really been a show that’s connected on that level, that brings that nostalgia into a show. I know they’ve tried with "Freaks and Geeks" and "That '80s Show." And they just didn’t last. So hopefully it’s the right timing and it will speak to people.

There's a lot of yelling and craziness in the family depicted on your show. Is that an exaggeration of your real family?

It's actually kind of the opposite. I think my mom did things that were just so ridiculous that if we told it true to life, it would just make people not want to watch. I think sometimes my family was so loud that everyone would want to shut off their TVs. So in the writers' room all the writers say there’s like a real Beverly Goldberg and there’s a TV Beverly, and the TV Beverly is kind of a more dignified version of my mom that’s easier to swallow and there's a more dignified version of my dad that’s easier to take. And I still get criticisms of my dad that he's too loud on the show, and mom is too crazy. But this is kind of the toned-down version of my real family.

Some critics have likened your show to "The Wonder Years" because of the voice-over and the nostalgia factor. How do the two shows differ?

I would say the main difference is the "Wonder Years" played more like a dramedy. It was in my opinion the best pilot ever seen. But it had some heavy themes -- you know, when the brother dies in Vietnam. To me, "The Wonder Years" was never a sitcom. It was an hour-long show scaled down to half an hour.

Talk a bit more about history, and why you don't necessarily feel the need to be too meticulous about the chronological history of the 1980s when developing story lines for your characters.

Historically there are so many inaccuracies, I’m not even sticking to a particular year, which I think some people are having problems with. But I’m not doing "Mad Men" here where every year is going to introduce a new style. It’s just like I can’t wait nine years to have a Power Glove in 1989. So the stories I see fit, the things I remember from different years; I don’t even remember what year things were, I don’t remember what year I won "Legend of Zelda." But, you know, I want to do a story about it, so I can’t be limited by the year.

Does the difference between the events of the 1960s and the 1980s explain why it might be easier to do a comedy about the latter than the former?

Yeah. I think the '60s remind you of Vietnam when you look back. And the '80s remind you of pop culture and movies. When people think '80s they think "Back to the Future" and Rubik's Cube and Transformers and all these things that have been cyclical and circled back to us today. It's clothes, the celebrities, the movies and the TV that kind of defined that time. And by nature those things are ridiculous and awesome, and so that’s why the '80s are just a fun time period [for a show]. The music was wonderful and bad, the hairstyles, the clothes were hard to look at, and almost now hipster.

The generation that was watching the cartoons on TV are now in Hollywood in the position of power to make decisions and get things green-lit. So that’s what we are flocking to. And I think that’s part of the reason why there’s a resurgence of '80s movies coming back. Now we are at the age where we are the ones kind of making the decisions.

How do you think parenting has changed since the '80s?

I've discussed this a lot with Jeff [Garlin] about how he's going to play with my dad in the '80s, and how we make him lovable and do the reality, which is a dad that could scream and call you a moron and it wasn’t a big deal. Of course, I would never, ever say that to my kids now. I think it would shatter them to their core.

When we screen-tested the show, the thing that was so shocking was that so many people related to my dad and said my dad was just like that growing up in the '80s. One guy said, My dad would sit with a bowl of cereal on his belly and eat cereal and watch TV and yell at us. That’s how he remembers his dad. And he was very touched that that kind of character was now on TV.

I think today if some dad did that kind of thing, a kid would shoot it and put it on YouTube and it would become a viral video. It was just different back then. I don’t think our parents were equipped with much. I don’t think they really knew what they were doing. They didn’t have websites, there weren’t lots of experts on TV talking about parenting, and if there were my parents didn’t know who they were. So they were just dealing with what they were given, which was that you yell.

There seemed to be a generation gap between different parents in the 1980s. There were those like your dad who grew up before the 1960s and those a little bit younger who grew up during the 1960s. Was the 1980s a turning point between those two generations?

Absolutely. I always say that even though my dad was alive during Woodstock he was just not invited. He just seemed like he was from a different generation. And then there was the dad on "Family Ties" who was at Woodstock, and he was a hippie, and he was accepting, and he could communicate, and the concept of that show was that a hippie dad is raising a Republican son. My dad felt old school. There were definitely those younger parents that we grew up with that weren’t like our parents. But, again, I was the third kid, so the way my dad was he was operating from the 1950s -- not the late 1960s and 1970s.

When people watch "The Goldbergs," what do you think will seem most different about the 1980s as compared to today?

I think it’s probably the hair and the clothes. I really wanted that to feel on my show, but when you have someone in a neon jacket it doesn’t seem real. But that was the style.

I also think for today's kids it is shocking to them that we grew up without computers. The show, for instance, is about how I was the first kid on my block to have a video camera and to record everything. But today, there's a video camera on every phone that everyone carries with them. So the lack of technology in the 1980s I think is shocking. We had to go to video stores and we had to go to arcades. An iPod right now is like the equivalent to the world’s fastest computer back then in terms of memory. I think my Apple 2+ had like 8 kilobytes of memory. Kids will probably wonder how we survived without all those things.

How has childhood changed most since the 1980s?

Through writing this show, I realized that all the technology probably makes kids less innocent. I was such an innocent kid back then and I think kids now are really savvy, they are raised with all this technology. Parents can try and control that, but kids find ways to access that technology, and there's a dark world that exists out there. Back in the '80s the scariest thing was someone putting razor blades in your candy.

Do I think technology is bad? No. I think it's wonderful that the world is so connected now. But I think as a result childhood ends a little earlier.