Why I won't call myself a "slut"

When only white women like Miley are defending against "slut-shaming," I have no interest in reclaiming the word 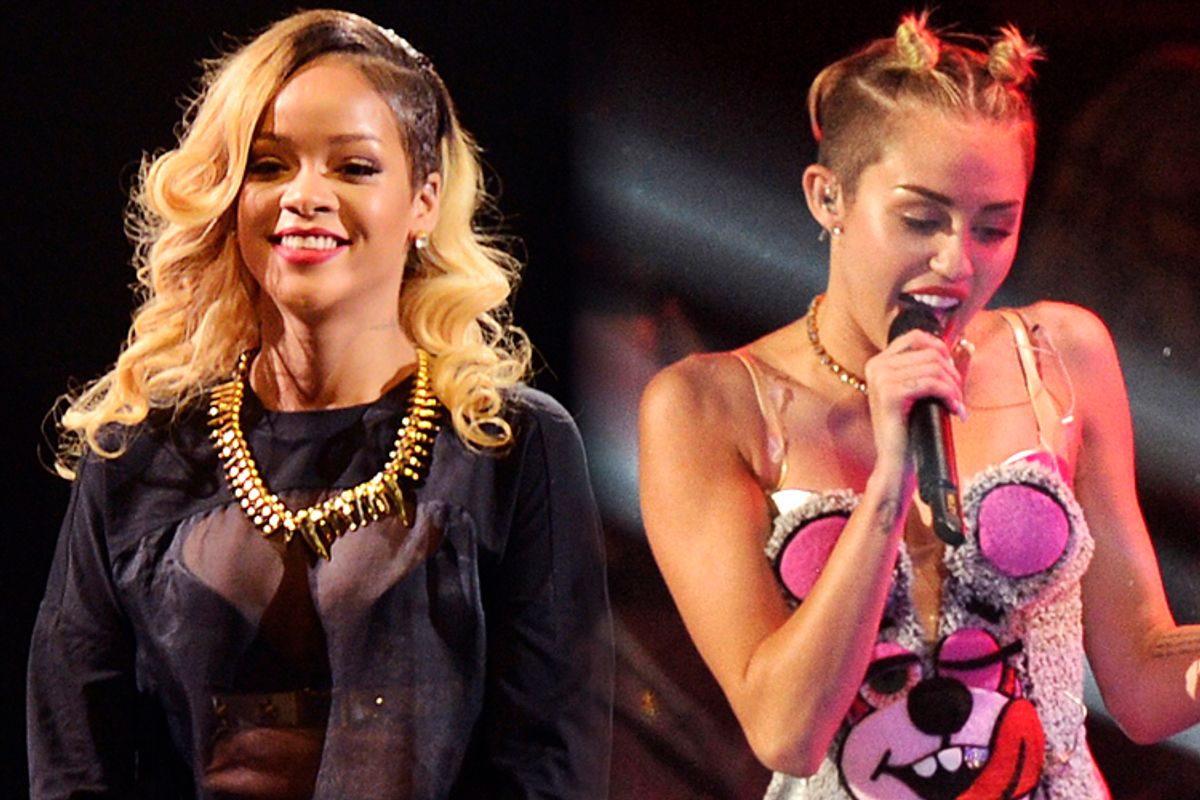 I am black, I am a woman and I am a feminist. In private, I often refer to this trifecta as the holy trinity. My biological, social and chosen identities shape how I move, how I am perceived and how much space I am allowed to take up in a white-male-dominated world. In trying to put my feminism into practice, I do not always stand behind every so-called feminist issue that is mandated by mainstream white feminists. For example, feminists have made a big push to critique what is termed “slut-shaming” and to reclaim the word “slut.” They have organized nationwide marches and written hundreds of blog posts in an effort to take back the term and subvert it.

“Slut-shaming,” the act of negatively judging and policing women who take full control of their sexual agency, is an act deeply rooted in sexism and misogyny, all things feminists should be against. It seeks to demean women who carry their own condoms, who initiate conversations about sex, or who negotiate their sexual wants and desires openly. The mere act of seeing oneself as a sexual being and being proud of it makes you a target for being “slut-shamed.” All the things that society commends men for doing and measures their masculinity against, society also condemns in women.

I am all for marginalized groups reclaiming words that were once used to shame and dehumanize them. I stand firmly behind the reclaiming of the term “queer,” especially as a verb. Queering languages, queering spaces, and queering understanding is something that I am politically committed to doing in my life, but as a black woman I have no desire to reclaim the term “slut.” My act of resistance in not wanting to reclaim the word “slut” does not mean that I advocate for “slut-shaming.” I do not agree with the sexual policing of women no matter their race, class, gender presentation, body size or ability. But one of the major flaws of mainstream feminism is the propensity to generalize about the lives of women, treating women as though they all face the same threats, and therefore can only be liberated through a one-size-fits-all model.

Racism is ubiquitous and I am keenly aware of how race and class impact different women differently. If we are going to advocate against “slut-shaming,” and for owning the word “slut,” we cannot do so without paying attention to the facts. We must ask, who are the women being defended against “slut-shaming,” and who are the women being left to defend themselves? Only white women have the privilege of reclaiming the word “slut” without facing any real social penalty. Miley Cyrus, for instance, is being hailed as a woman who is in control and liberated, unlike her black counterpart Rihanna. Rihanna does not get worshiped for owning her sexuality or her agency. Rihanna gets pity, scathing criticism, and popular feminist magazines wanting to “save” her from exercising choices they do not agree with. Many mainstream feminists feel entitled to police Rihanna’s black female body; even Lena Dunham could not resist. However, if you look closely you can see that Miley has been feverishly studying and has been influenced by the Rihanna's bad girl playbook.

White women may also be allowed to transcend their “sluttiness” when they feel the need to do so. Both Angelina Jolie and Madonna have been able to shed their past bad girl images seamlessly. Whiteness affords white women the ability to try on different identities while their racial privilege remains intact. Because in a society that values whiteness over all else, to be white is to be human and all non-white persons must audition for their humanity.

The bodies of black women are highly politicized and critiqued no matter who they belong to, from the first lady to "the help." The physical movements and choices of black women are always viewed through a filter of suspicion. In order for me to claim my right to be a “slut,” I first must win the battle to be able to fully claim my humanity.

Black women have always been labeled as hypersexual beings unworthy of respect, love and justice. “Slut” is the default position of black women, so attempting to subvert the word or own it would only further root the false stereotype in place. “Slut-shaming” black women has not just been common practice -- it's been entrenched in public policy. Members of the Tea Party are still looking for the nefarious “welfare queen” that President Reagan created 30-plus years ago. Compulsory state sterilizations of black women, unequal incarceration rates and even the way we decide who receives welfare benefits are all rooted in “slut-shaming.”

The majority of white feminists who advocate for reclaiming the word "slut" also fail to defend all women against "slut-shaming." When Rush Limbaugh “slut-shamed” Sandra Fluke swaths of white feminists came to her defense, and rightfully so. But I question whether the feminist infantry would have been so zealous if Sandra Fluke looked like Rachel Jeantel. Trans* women of color are frequently stopped and frisked and arrested for having a condom on their person. They are wrongly imprisoned for standing their ground and placed in prison with men, and murdered for daring to be seen in public. These injustices happen constantly, without any marches or much fanfare from the mainstream feminist establishment.

The social and political ramifications of policing black women cannot be solved by simply taking back the word “slut." If there are no real policies put in place to protect and defend women of color and trans* women from compulsory “slut-shaming,” then once again I must ask: Who are mainstream feminists truly invested in protecting from “slut-shaming”? Policymakers and media must stop pathologizing the behaviors and relationships of black and trans* women of color. Trans* women must be given full rights and recognition on par with cisgendered women. White feminists who have large platforms and access to large platforms must make a real effort to include women of color and trans* women, and allow them to speak for themselves. As a black woman, I won’t be concerned with reclaiming my inner “slut” until white women show more interest in being in solidarity with me.

Lutze B. is a hyphenated-American, social justice advocate and writer who resides in Miami. You can follow her feminists musings on Twitter @FeministGriote

MORE FROM Lutze B.