Labor activists say a presentation Wal-Mart made to Goldman Sachs proves most workers make less than $25,000 a year 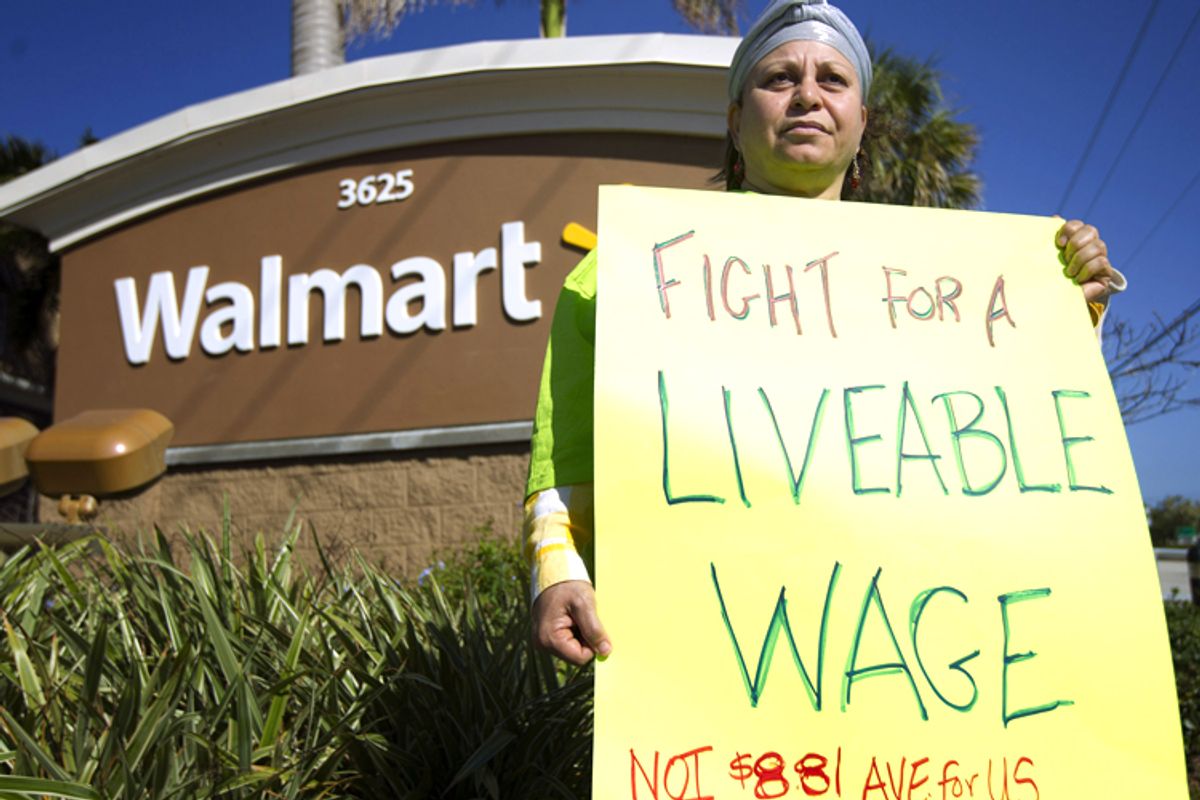 A slide from Wal-Mart’s U.S. CEO’s presentation to Goldman Sachs’ retail conference boasts that “Over 475K” U.S. employees earned more than $25,000 last year. Activist workers and members of Congress seized on that statistic at a Wednesday press event, arguing it amounts to an admission that annual pay for the majority of Walmart’s 1.3 million-member U.S. workforce falls below $25,000.

“Low-income people, poor people, have been demonized for being the ‘takers,’” Rep. Jan Schakowsky told reporters at a D.C. press conference. But because “taxpayers are the ones that are subsidizing Wal-Mart right now,” she contended, Wal-Mart elites are the true “welfare kings in this country.”

In an email to Salon, Wal-Mart spokesperson Kory Lundberg said that “at Wal-Mart, everyone has the opportunity to build the kind of career they want and many associates advance to salaries much higher than $25,000.” Citing “about 160,000” promotions each year, he said, “clearly the opportunity is there for associates to go as far as their hard work will take them.”

Schakowsky’s critique was echoed by two other House Democrats. Rep. George Miller, the top Democrat on the House Education & the Workforce Committee, argued that when Congress passed welfare reform, the goal was to help poor people “end their dependency on public assistance – but that’s not the business plan that Wal-Mart and others have fashioned out.” California Rep. Grace Napolitano urged that “we need to start looking” at what portion of public assistances dollars are “subsidizing the Wal-Mart employees, and actually in turn subsidizing Wal-Mart itself.”

Asked about such criticism, Wal-Mart’s Lundberg referred Salon to a prior company statement, which called a report released by Education & the Workforce Committee Democrats “yet another disingenuous attempt to demonize Walmart while ignoring all the positive economic impacts that the brand and its stores make every single day.” That report had estimated that “a single 300-person Wal-Mart Supercenter store in Wisconsin likely costs taxpayers at least $904,542 per year” based on Medicaid data.

The congressional Democrats were joined by members of OUR Walmart, the non-union workers group closely tied to the United Food & Commercial Workers union, who described their experiences making less than $25,000 a year. After “student loan payments, transportation, rent to my grandmother, I have barely nothing,” said Illinois employee Richard Wilson. “I shouldn’t have to decide between feed my kids or pay my rent,” said Maryland employee Gail Todd. “I’ve got to get another payday loan to be able to pay another payday loan,” said California employee Anthony Goytia. He told reporters he had scars “like a junkie,” because he repeatedly donated blood plasma for money.

OUR Walmart’s spotlight on Wal-Mart’s Goldman Sachs presentation is the latest volley in the battle between the company and its critics over how much Wal-Mart pays – one front in the larger message war over whether the retailer’s economic model is good for the country. Wal-Mart has pegged its average wage at $12.78 per hour (that’s over $25,000 if multiplied by 40 hours and 50 weeks), but that figure excludes part-time employees and includes managers. (Wal-Mart did not immediately respond to an inquiry regarding why it does not release a figure that includes part-timers.) Estimates cited by labor groups – drawing on 2011 IBISworld data and GlassDoor.com – put the number at $8.81 or $8.84. OUR Walmart framed Wal-Mart’s declaration that more than 475,000 workers make over $25,000 each year as an implicit acknowledgment that more than 800,000 make less – even as Wal-Mart reaps $17 billion in annual profit. (The September presentation was been posted on Wal-Mart’s website, but the 475,000 figure had not been previously reported.)

As I’ve reported, OUR Walmart has mounted a series of strikes against the retail giant as part of a campaign demanding better pay, workplace respect, and an end to alleged retaliation. Dozens of workers at a Hialeah, Fla., Wal-Mart also walked off the job Friday, the first work stoppage by U.S. Wal-Mart store employees since the firings of 20 workers who’d joined a June strike. Rep. Schakowsky, the House Democrats’ chief deputy whip, called the workers’ call for Wal-Mart to pay at least $25,000 a year, “not a luxury wage,” and said that “for many people and families it’s not even really a living wage, or certainly not an extravagant wage. But just asking for that has elicited retaliation.”

Such comments from certain congressional Democrats stand in sharp contrast to the president’s posture on Wal-Mart. As I've reported, the UFCW pushed unsuccessfully in Obama’s first term for the administration to stop publicly praising and appearing with the company. U.S. Labor Secretary Tom Perez last month told me he lacked sufficient information to weigh in on Wal-Mart’s firings of activists, and described Commerce Secretary Penny Pritzker’s August appearance at a Wal-Mart Manufacturing Summit – which occurred the same afternoon that fired workers were mounting a civil disobedience protest against the company – as a sign that “we’re working with employers large, medium and small to bring jobs back to the U.S.” The chairman of the White House Council of Economic Advisors, Jason Furman, is the author of the 2005 paper “Wal-Mart: A Progressive Success Story,” and in 2006 criticized Wal-Mart critics for appealing to “the atavistic anti-welfare, anti-government, anti-tax instincts of some conservatives” in their rhetoric about Wal-Mart employees’ use of public assistance.

“I don’t want to rely on food stamps, you know,” OUR Walmart’s Goytia told reporters Wednesday. “I pay taxes too … I want to be able to provide for my own family.” Workers plan to mount another major “Black Friday” strike the day after Thanksgiving. Goytia said he wanted the chance to look Wal-Mart management in the face and tell them, “I’m not afraid of you, Wal-Mart. You guys come and look for me.”