"Speaker for the Dead" sets Ender up as a white male savior, and implies a female character deserves abuse 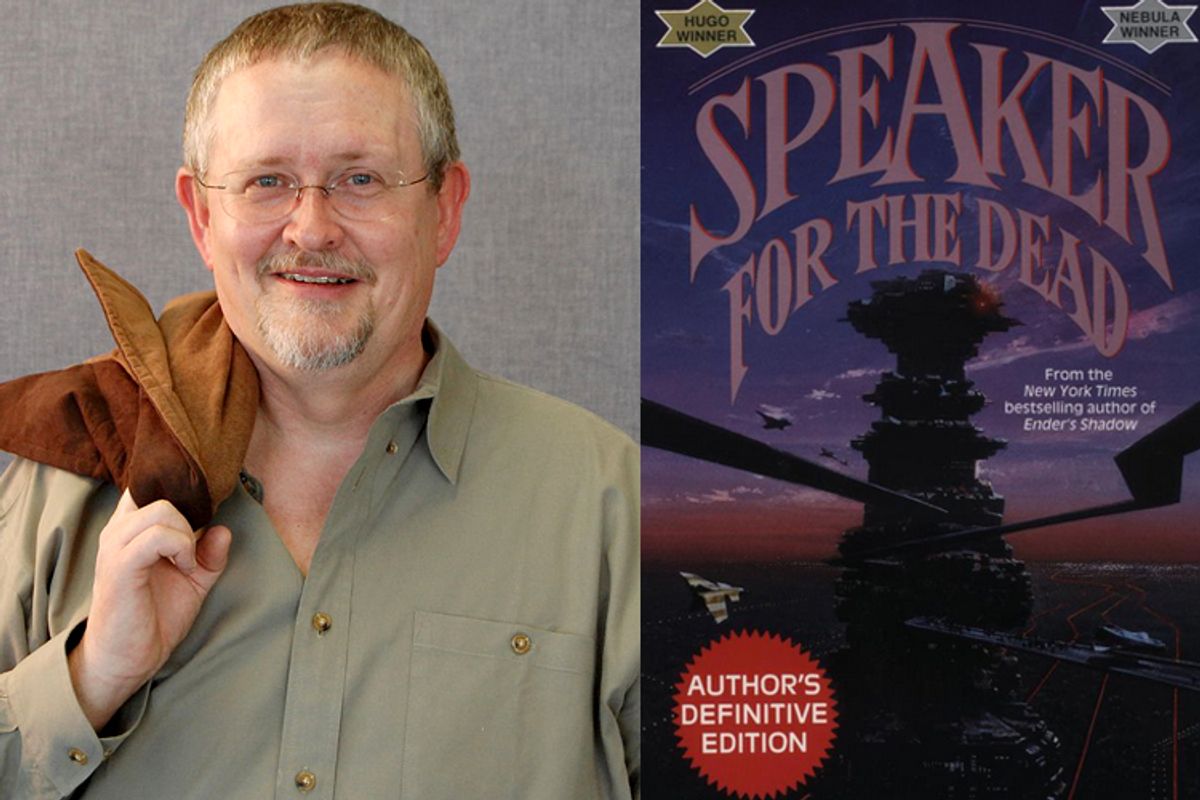 Last month I argued that Orson Scott Card's "Ender's Game" provides a subtle, thoughtful, and passionate defense of genocide. Several commenters countered that the later novels in the series were adamantly anti-genocide, and undermined my reading of the original.

To some degree, this is true. "Speaker for the Dead," the sequel to "Ender's Game," is a very different book from its predecessor, not least in its treatment of aliens and violence. "Ender's Game" involves an intergalactic war to the death between humans and the super-advanced alien buggers. "Speaker for the Dead," on the other hand, is set 3000 years later, mostly on the single planet of Lusitania, where anthropologists are studying a race of relatively low-technology aliens known as "piggies." In "Ender's Game," violence almost always escalates; whenever Ender is attacked, either by humans or buggers, he responds with overwhelming, deadly force. In "Speaker for the Dead," the piggies torture and murder two of the anthropologists, but in neither incident (separated by decades) do the humans return violence for violence. Instead they wait and try to understand — and the result is not genocide, but peace, alliance, and equality.

"Speaker for the Dead," then, seems to repudiate the morality of "Ender's Game." And yet, the book is oddly chary about explicitly condemning the genocide of the first volume. It's true that Ender's genocidal actions are reviled throughout the galaxy. Yet Ender, still alive after 3 millennia due to relativistic space travel, suggests that, in context, the genocide was understandable and even justified:

Everybody condemns the Xenocide because it destroyed an alien species that turned out to be harmless in its intentions. But as long as it seemed that the buggers were determined to destroy humankind, the leaders of humanity had no choice but to fight back with all their strength.

"Speaker for the Dead" suggests that there were in fact other options, like patience and wisdom. After the bugger invasion, for instance, the humans could have waited to see if they were attacked again rather than preemptively sending fleets off to destroy the bugger homeworld. But the text somehow manages to acknowledge other option and and yet still see the earlier genocide as inevitable, and therefore, by default, justified.  How can it do that? And, more importantly perhaps, why does it do that?

The answer to both questions is Ender. Ender is not only the destroyer of the buggers; he's also their salvation. At the end of "Ender's Game," he discovers the lone surviving bugger hive queen pupa, and determines to find her a new planet where  the buggers can be reborn. He also writes a history of her and her people titled "The Hive Queen," which he signs "The Speaker for the Dead." The book becomes the center of a widespread religion; it's the reason that humans see the death of the buggers as a tragedy. In the 3000 years between "Ender's Game" and "Speaker for the Dead," Ender goes from planet to planet seeking a bugger homeworld and as a Speaker for the Dead delivering eulogies for those who request it, in the same way he eulogized the buggers.

So to sum up, Ender is, (a) the greatest military leader in human history, (b) the greatest religious leader and prophet of his time, and, (c) the hope for the rebirth of the buggers. But!  That's not all! He also has been chosen as sole human interlocutor by a spontaneously generated super-sentient AI named Jane, who communicates with him through an interface in his ear. Thus, Ender carries about with him a literal deus ex machina.

Ender is, then, a massive, honking, preposterously exaggerated, Mary Sue. Indeed, the wish fulfillment on Card's part couldn't be much more obvious. For Ender is not just the destroyer and the savior; he is the destroyer and savior as writer. Ender's greatest ability is his amazing capacity for empathy, for understanding others. In "Ender's Game" he used this power (and it does function almost like a superpower) to destroy the buggers. In "Speaker for the Dead" he uses it to tell stories — the stories of the bugger queen, the dead people for whom he speaks as an itinerant eulogist, and eventually the piggies. He is the sensitive conduit through which the alien is met, interpreted and comprehended. And to emphasize this point, through most of the book he's the sole human contact for not one, but two alien intelligences — the Hive Queen and Jane. It's hardly a surprise that it's Ender who breaks through and really understands the piggies after generations of  local anthropologists fail to do so.

Ender succeeds with the piggies because he treats them with respect:

"It's all part of their system of totems. We've always tried to play along with it, and act as if we believed it."

"How condescending of you," said Ender.

"You're so busy pretending to believe them, there isn't a chance in the world you could learn anything from them."

[…]"We've devoted our lives to learning about them!" Miro said.

Ender stopped. "Not from them….You're cultural supremacists to the core. You'll perform your Questionable Activities to help out the poor little piggies, but there isn't a chance in the world you'll notice when they have something to teach you."

Ender wants to learn from the piggies, rather than wanting to learn about them — an elegant and pointed critique of anthropology and of social sciences in general.

But while Card's insights here are well taken, they can't quite balance out the fact that they are presented as Ender's insights. Or, to put it another way, Ender eloquently explains why the piggies need to be seen as equals, but his own position as explainer, martyr, and general avatar of awesomeness means that, narratively, they can't be equal. Ender is the hero/author/interpreter — Ender is the savior with whom we identify, and the different others are the supplicants whom, with him, we save. Thus at the end of the novel, it is Ender who writes the story of a piggie named Human, adding it to his work on the Hive Queen and to his book about his brother, Peter, who became the ruler of earth. All stories are told through Ender; he speaks for everyone. Is that universal, egalitarian empathy? Or is it a way to ensure that there is only one voice?

That question is, perhaps, most pointed when it is applied not to the piggies or the Hive Queen, but rather to the woman our hero eventually marries. Ender is initially called to Lusitania by a young girl named Novinha, a xenobiologist who worked closely with Pipo, the first anthropologist the piggies killed. Ender essentially falls in love with Novinha's picture at first sight. But by the time he arrives on Lusitania by relativistic space flight, decades have gone by for that young girl; Novinha is now a middle-aged woman, with children of her own. She doesn't want Ender to speak Pipo's death anymore. But two of her children want him to speak the recent death of their father, Marcão, an angry, bitter man, who beat Novinha for years.

So Ender speaks the story of Marcão's life, which is also the story of Novinha's life. Novinha believed that she had made a discovery which led to Pipo's death. She wanted to keep that discovery from Pipo's son, Libo, whom she loved. But if she married him, he would, by the law of the colony, have access to her files. So she married Marcão instead. Marcão, she alone knew, had a genetic disease which rendered him sterile (and eventually killed him). So she had six children by Libo, with nobody suspecting except Marcão, who had agreed to the arrangement. Thus, Marcão's violence was a direct response to Novinha's adultery.

After Ender reveals these truths in his speaking, the family is able to put all the lies behind them, and begin to heal. At the conclusion of the book, Novinha marries Ender.

What we're supposed to get from this is that everyone, even the most despised, most violent person, is understandable. Even a wife beater deserves empathy. In order to get there, Card presents a narrative which reproduces and validates the most invidious myths and excuses for domestic violence. Specifically, the violence is presented as an understandable reaction to Novinha's failings; not just her adultery, but her lack of compassion. Marcão "hoped that she might someday feel some affection. That she might feel some — loyalty." But she doesn't, so he hits her, out of love. And even she agrees she deserves it. "It was her penance. It was never penance enough. No matter how much Marcão might hate her, she hated herself much more."

That's not Novinha's internal monologue there. Rather it's Ender, speaking her inmost thoughts aloud to the community. But we're supposed to believe those are her inmost thoughts — Ender understands her to her core. And what he understands is that she fits perfectly into a common male fantasy of domestic violence which highlights the woman as the instigator and the man as sufferer. His empathy doesn't so much give him insight into her (female) perspective as it allows him to ventriloquize her in the interest of validating male violence. Which is, not coincidentally, exactly what happens in "Ender's Game," where Ender's connection to the Hive Queen reveals that she accepts and forgives the genocide against her people.

In "Ender's Game," genocide becomes a sacrament because Ender is a saint of empathy, and genocide is what he does. In "Speaker for the Dead," on the contrary, Ender works for understanding with the aliens. In some sense, then, the second book repudiates the first, rejecting genocide for peace. But in genocide or peace, Ender remains the standard, the white male savior whose perspective is truth. Whether with guns or words, the alien is erased so that Ender may be glorified.