The scary lesson of "12 Years a Slave": How little America has changed 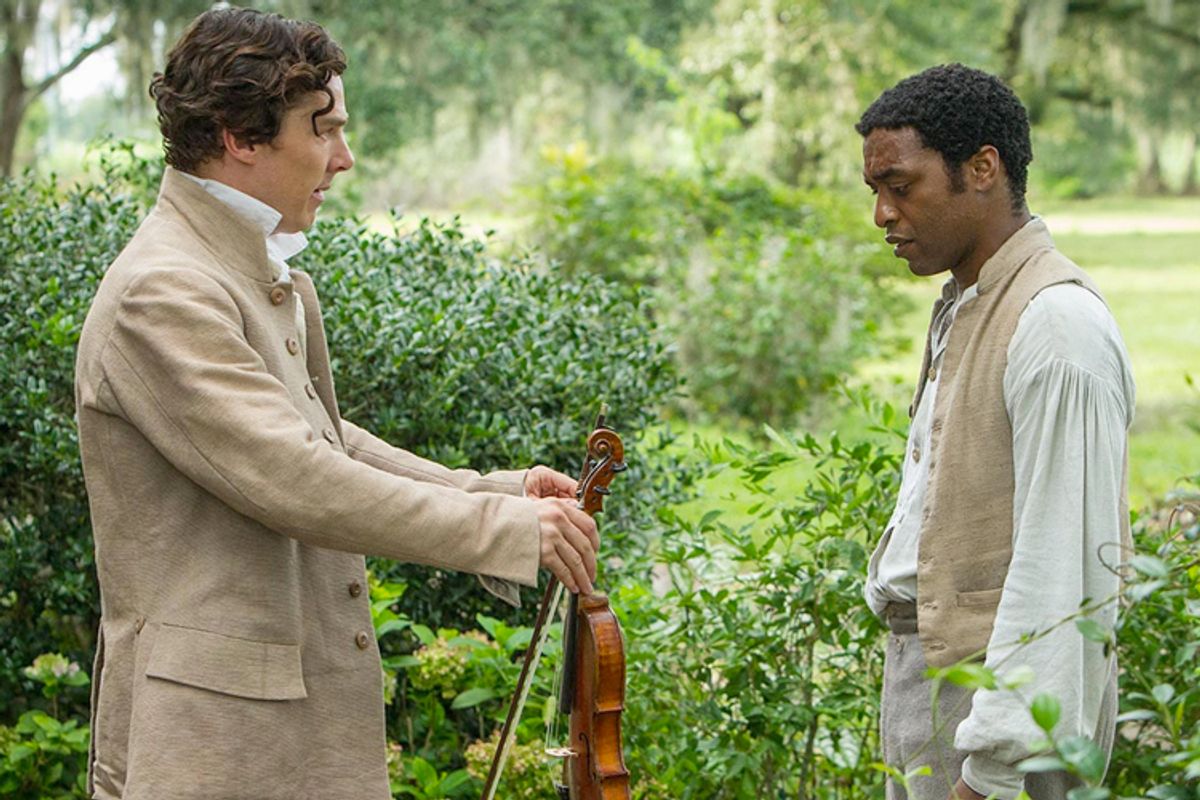 For most of their time in this country, Black Americans have learned to hide their true and inner feelings from white people. This is a necessary survival skill for life in a racist society. The “mask” also extended to public spaces as well. Barbershops, hair salons, churches, fraternal organizations, homes, bars and private clubs, were places where black folks could engage in “private talk” with a diminished fear of the white gaze and the harm that its many agents could cause us.

The new movie "12 Years a Slave" is a quintessentially American story. White supremacy remains central to American political life because it is one of the foundations upon which the United States was founded. The struggle against it remains in the year 2013.

"12 Years a Slave" is also a nightmare vision. While graphic, its violence is rather routine relative to the expansive (and in many ways “creative”) cruelties that were visited upon black slaves by white people.

"12 Years a Slave" is also a representation of the private thoughts, fears, and collective anxieties felt by African-Americans. There is a deep tension between wanting to see the brutality of chattel slavery presented for public consumption in such a way that it corrects what remains a very “white washed” and fictionalized public memory about “the peculiar institution,” and the intensely personal and intimate exercise that is being a member of the Black Diaspora and watching "12 Years a Slave" in a theater.

This experience becomes even more intense and intimate when it is the black body being torn apart, raped, and abused by white people on screen, and white and black moviegoers, as both a society and a community, have not collectively confronted the meaning of that historic crime, or its echoes in the present.

In all, "12 Years a Slave" challenges viewers because it offers no easy out or solution either for the viewers or its protagonist Solomon Northup.

Ultimately, "12 Years a Slave" is a horror movie for Black America, one that is especially visceral for the upwardly mobile black Americans of the post-civil rights era.

Solomon Northup was a free black man, immensely talented and intelligent, and who had carved out a place for himself among the white elites in his native New York. America was a slave society: most blacks were the human property of whites. Thus, Solomon Northup was a true outlier. He was the very definition of an “exceptional” black man. Yet, in one moment all of his freedoms and accomplishments were stolen away. They counted for nothing because several white men decided that he would be kidnapped and sold away for their profit.

Of course, in the 21st century black Americans are no longer slaves. But a sense that human rights for Black Americans (and other people of color) are still contingent and at risk is very real and alive in the post-civil rights era.

When black Americans driving a nice car, one which “people like them” ought not to own as judged by the police, are racially profiled and harassed, it is a reminder of their Otherness.  When black Americans are followed around department stores, asked for identification when making routine purchases, or otherwise harassed for wanting to participate as full citizens in “the consumer’s republic,” it is a reminder that they are perennial outsiders. Even black celebrity millionaires and billionaires are not free of such policing by those who are acting in the name of White authority. Black graduates of elite universities are less likely to receive job interviews than white applicants. Black men without criminal records who apply for jobs are just as likely to receive an interview as white men that are felons. Black Americans who are middle and upper class live in neighborhoods that in terms of public services and net worth more closely resemble those of poor and lower-class white communities.

Solomon Northup lived in a state of existential threat to his freedom. Black Americans today remain subjected to efforts by a society steeped in white racism and white privilege to put them “in their place” when they are perceived as “getting out of line.” Formal white supremacy is illegal in America. However, many of its informal conventions remain.

Barack Obama is central to this dilemma and puzzle. He is arguably the most powerful person in the world. He is the exemplar of the multicultural elite class which has come to prominence in the United States after the Civil Rights Movement.

In addition, Obama’s racial politics are very conservative. He actively avoids discussions of race-specific solutions to the problems facing the African-American community. And when he does discuss the latter, Barack Obama revels in his chosen role as the “Scold-in-Chief” of Black America.

Nevertheless, Barack Obama is subjected to vicious and bizarre assaults on his legitimacy by white conservatives who cannot reconcile his “blackness” and role as the symbolic embodiment of the United States of America. The White Right is so disdainful of Obama’s personhood and humanity, that they will risk destroying the United States economy in order to protest the legitimacy of the country’s first black president.

What are the outrages directed against Barack Obama by a Republican Party, one that which channels both the language and imagery of the Confederacy and the Southern Slaveocracy, if not an effort, on a national scale, to beat back and humiliate an “uppity” black man?

African-Americans identify with Barack Obama both out of a sense of well-deserved racial pride and because he is a champion of sorts for black strivers and the politics of black respectability. We hurt for him too, and feel the needles of white racism and disrespect when they are thrown at him, because when the White Right assaults Obama’s legitimacy and “Americanness” they are also spitting in the metaphorical face of Black Americans’ full citizenship and belonging.

Solomon Northup’s experience in the film "12 Years a Slave" is a Dante-like ordeal in which black humanity was under siege by predatory whiteness and white supremacy. That world was hobbled by the Black Freedom Struggle and a Civil War. However, its legacy remains in the way the accomplishments and successes of upwardly-mobile black Americans remain imperiled, insecure, and undermined by a system of white privilege which still threatens, and in many ways, actively assaults them.