The scary new normal: Teaching kids what to do in a school shooting

In the wake of school violence, teachers and students are in defense mode 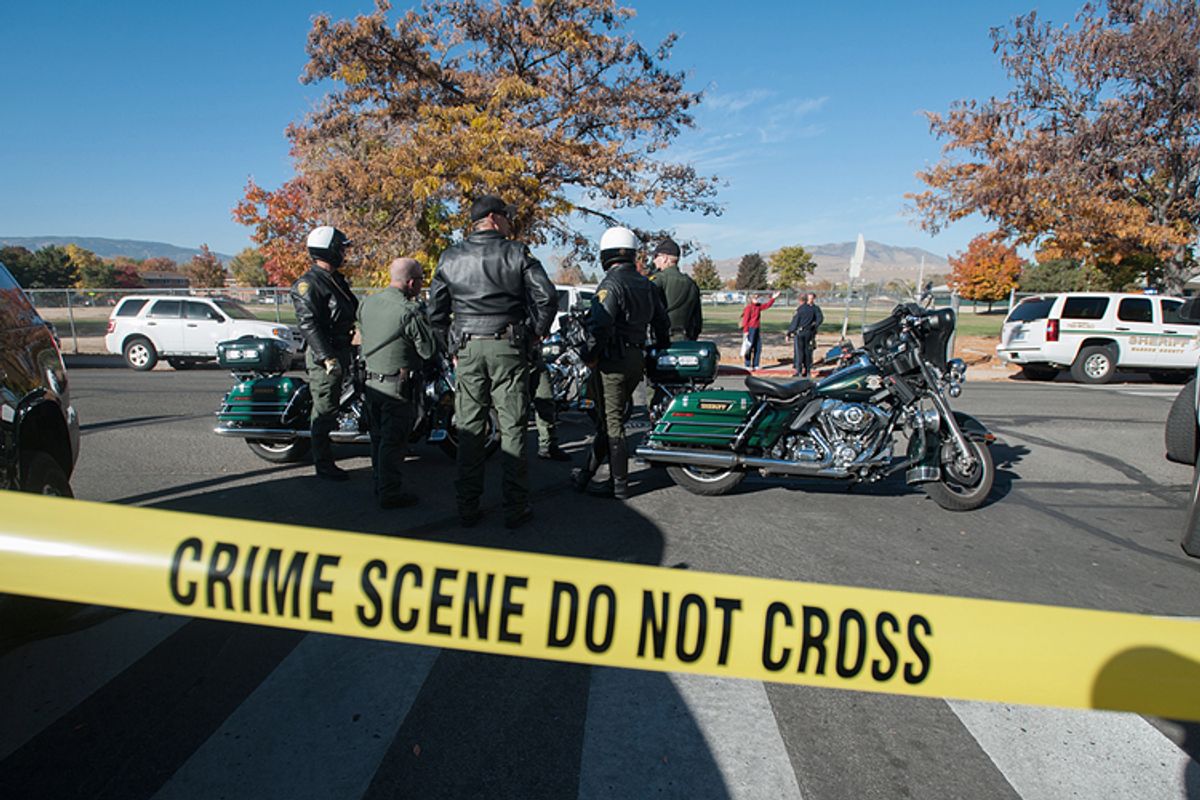 In the town of Sparks, Nev., on Monday, an individual identified as a 12-year-old student got into an argument at his middle school. He then shot and killed a math teacher and wounded two students before he killed himself. Would your child know what to do if that kid walked into her school?

Just a few weeks ago, I asked my 9-year-old daughter what she'd done in school that day. She'd told me how she'd practiced her monologue for drama and she'd wrestled with division in math and she'd climbed the monkey bars at recess and somehow negotiated for a friend's cookie at lunch. And she told me, to my surprise, she'd done a lockdown drill.

Her teacher had locked the door and turned out the lights in the classroom. She and the children had to sit quietly for a few minutes, until the signal was given to resume classwork. It had been, my daughter explained, just a "soft" lockdown. "It's just for if someone gets past security without ID, or there's a rabid dog on the loose," Beatrice had explained. "It's not like a hard lockdown, for if someone comes in with a big coat and a gun." I'd asked what would happen then. And my little girl calmly told me how and where she and her classmates would hide if an armed intruder outside were trying to kill them.

You send your children off to school every morning with a kiss and a hope that they'll be OK for those few hours out of your care. You hope they've remembered their homework, and that nobody picks on them at the play yard. That the fire drill will be just a drill. That a lunatic with a gun won't barge in.

Lockdown drills are becoming a common occurrence across the country. They're an unfortunate side effect of living in the era of periodic school shootings – as well as catastrophic weather events. They've even been voluntarily used here in New York City – although not always successfully. In December, shortly after the massacre in Newtown, Conn., a lockdown drill in an East Harlem school for children with special needs sent a a wave of panic among students and adults who thought it was a real intruder emergency. When an unidentified woman called 911, police raced to the scene.

But the drill is new this year at my younger child's school. Last spring, New York Schools chancellor Dennis Walcott announced to the city's public school principals that the drills would become mandatory for the 2013-2014 year, and that school leaders would be trained over the summer in emergency response techniques. In other parts of the country, teachers are being trained in "shooter self-defense" workshops.

When Beatrice told me of her school's first drill, it was to her simply a few moments of pretend – albeit scary pretend – in a life that's still full of imaginary drama. The thought of real violence in her school is still abstract to her – just as the possibility of fire had been a generation ago for me, or a nuclear attack had been to my mother, ducking and covering a generation before that. Yet this new acknowledgment of the potential of violence invading my child's life, my community, chilled me in a new way. It haunted me for weeks. I am all in favor of preparation. But I wanted to know how other parents felt about it, if they believed the drills were useful, and if they'd caused any nightmares along the way.

"We have had drills for several years now," Jennifer, an old high school friend and mother of two, says. And she can attest firsthand to their value. In her New Jersey community earlier this month, an armed man named Robert F. Terry III became embroiled in a standoff with police before shooting himself in the head. Jennifer says, "Both schools went into lockdown and then downgraded to a shelter in place. The drills helped everyone stay calm: adults, kids. They all seemed to know what to expect from the other." And, she adds, "I hate to be a fatalist but you can never stop all the crazies. The most that you can hope for is that you have provided your kids with some tools to maybe be OK. I think the drills help -- at least they give kids a point of reference to have in their heads."

My friend Marley, an elementary school teacher in Pennsylvania, echoed that and elaborated it for me, explaining her school's procedure. "Goes like this. Announcement made, 'This is a lockdown.' Wait three minutes in case anybody is out of room, lock door, move away from windows and turn off lights. Sit quietly on the floor while administrators roam halls, try doors and peek in windows. I think it takes about 5-10 minutes, then they announce the lockdown is over. They also bought magnets that fit over all the door locks so we always have the door set in a locked position and just slide the magnet up and pull shut to lock it. Kids don't seemed fazed by any of it." And she has an intimate experience with the need for drills. "We have been practicing it a few times a year for several years," she says. "A disgruntled former custodian came into one of our schools with a gun once, so we've been doing them ever since then."

It seems obvious that the way children and adults react to drills – and whether they're effective in preparing them for worst-case scenarios or only creating stress and chaos -- depends largely on how well the adults who lead them set the tone, and communicate with the rest of the school community. June, an acquaintance with three children in a D.C.-area school, says her kids had an intense experience at a drill last spring. The students had only been told there was to be an "exercise" that day. Then, "An alarm sounded, and all classroom doors were locked," she says. "Teachers informed the students that this was like a fire drill, except it was a lockdown. Students were to act as if there were a shooter in the building. Get away from the doors and windows. Get up against the walls. Make no sound whatsoever. A staff member had been assigned to walk the halls and test each of the classroom doors. That meant having a classroom of children in a dark, silent classroom, listening to the footsteps getting closer, and then the aggressive shaking of the doorknob as he attempted to get in." She says that in the school's windowless gymnasium, "One of the girls started to whimper; she was terrified. The teacher shouted that they had to be absolutely silent. That's when another student started to cry in the pitch dark, in the confusion. Then, they heard the sound of doors being shaken: someone trying to force his way into the gymnasium." Ultimately, she says, "I don't like the idea of my kids being told to picture a shooter in the building. But I am not sure whether that's the school's fault, or our reality."

I don't like the idea of my kids picturing a shooter at their schools either. But like the other parents I spoke to, right now, I know it beats the alternative of not having a plan in place, not being as prepared as possible for the worst. No one wants to imagine what Beatrice calls "a bad person" invading a place where children congregate. But this is the new norm in which we live. And I want our kids to know how to hide, just in case one terrible day they ever have to hide.