4 ways "Parks and Recreation" can come back strong 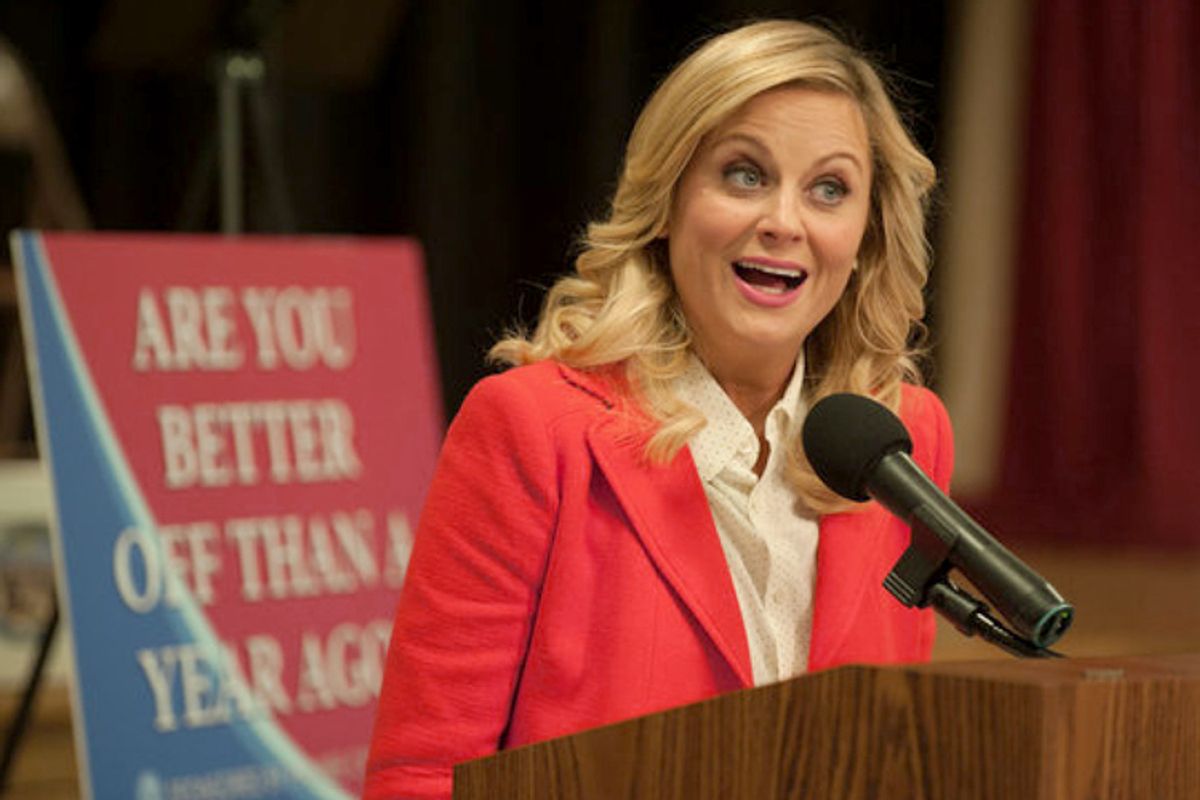 Call it a hiatus. Call it a pause. Call it a brief interruption of your established viewing routine. Whatever you deem it, "Parks and Recreation" will not air at its regularly scheduled time tonight or during the following two weeks. NBC recently announced that no new episodes of the show will air until Nov. 14, at which time the network will broadcast back-to-back episodes that night. When the news first broke -- and I don't think even "Parks'" own hapless man-on-the-street Perd Hapley would report this item as breaking news -- to some it signaled an uncertain future for the show.

While this may be a typical mountain/molehill situation (as Adam Scott says it is), it is discouraging that NBC has no qualms about airing "Parks and Recreation's" Halloween episode two weeks after the holiday. As a longtime fan of the program, I have fond memories of watching Tom Haverford (Aziz Ansari)  as T-Pain taking over the pathetic Halloween party thrown by Ann Perkins (Rashida Jones). I started wondering whether NBC had any real cause to shunt it aside. One Huffington Post reader wisely commented that NBC's once-strong Thursday night lineup -- "Office," "30 Rock," "Parks and Rec," "Community" -- had been decimated of late, leaving Leslie Knope & co. somewhat in the lurch. Perhaps NBC is just taking a moment to regroup and find a stronger lead-in for the show.

Vulture speculates that NBC is actually looking for a better lead-in to drive traffic to its fledgling "Sean Saves the World" and is banking that "Parks" just doesn't have the pull. (Apparently, "The Voice" does. The singing competition show will replace "Parks" on at least two Thursday evenings.) Whatever the network chooses going forward, after the November episodes of "Parks and Recreation" air -- three in total -- the program will not return until early 2014. If, indeed, "Parks and Rec" is experiencing noticeable growing pains, here are some suggestions for a return to proper form.

More Andy Dwyer -- The lovable oaf played by Chris Pratt is noticeably absent this season (due to filming for "Guardians of the Galaxy"). This does give more screen time to lesser-utilized characters like Donna Meagle (Retta) -- a noble cause, but maybe it'd be better to pair him up with Donna for some reliable odd-couple antics.

Get Leslie out of a Jamm -- Knope fans were so thrilled to see the perky blond pol elected to city council that watching her fall prey to Councilman Jamm and his malicious recall scheme seems a little too soon -- and even a bit arbitrary. I, for one, would have liked to see Leslie granted some time to get acclimated to her post.

Get Tom back in the office -- Tom Haverford's relentless freelancing has often felt too tangential to the everyday goings-on in the Pawnee Parks Department. His superficial buddy Jean-Ralphio was a hit at first glance. But the addition of his equally useless sister and the Rent-a-Swag enterprise is excessive.  I know Tom is boundlessly ambitious -- if not dedicated -- but maybe he can find some focus within the constraints of his actual job. Also, what is his actual job, anyway?

When all else fails, romance! -- Call me a sap, but I think Leslie and Ben Wyatt's (Adam Scott) hookup was an awkward, adorable shot in the arm for the show, as was April and Andy's. Now, with Ann Perkins and Chris Traeger (Rob Lowe) leaving Pawnee to presumably have their impossibly beautiful baby somewhere more appropriate, there's room for love to bloom once more. The effortlessly single Tom is the likeliest candidate. But, personally, I'd like to see Donna and Perd Hapley go on at least one date. He can report live; she can live tweet.