Liberals should unite with Libertarians (sometimes)

There are major disagreements, but they need each other to fight surveillance and other civil liberties issues

By David A. Segal 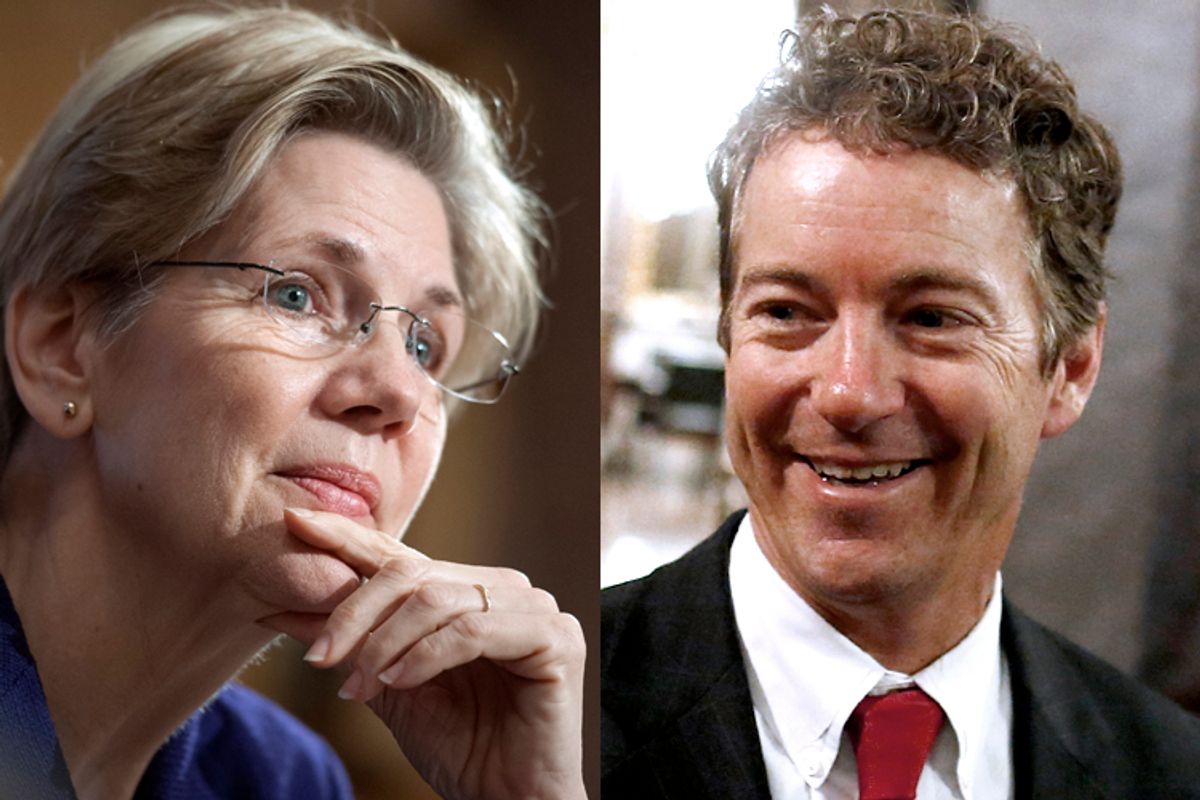 In a recent article for Salon, Tom Watson denounced this Saturday’s Rally Against Mass Surveillance in D.C., calling the demonstration, and the Stop Watching Us coalition that organized it, “fatally compromised” by the participation of libertarian student groups and the Libertarian Party.

While I agree with some of his criticisms of hard-right libertarianism, Watson’s strange-bedfellows paranoia is misplaced and ignores the recent history in which left-right coalition-building has been instrumental in winning victories against the major parties and their corporate backers.

Watson says, "The path to NSA reform so clearly lies inside the Democrats’ big tent." I  agree that we should compel Democrats to oppose the National Security Agency's surveillance regime, first by holding to account ostensible progressives like Nancy Pelosi, D-Calif., Ann Kuster, D-N.H., and Kyrsten Sinema, D-Ariz., who have betrayed the activist base by standing with the surveillance state and military contractors. And then we should elect progressive, civil libertarian Democrats (and Greens, and independents) to another 120 seats or so, to defeat the surveillance state without having to rely on Republican votes.

But the perfect should not be the enemy of the possible. While we must harbor no delusions about our differences, sometimes partisans on the left and right agree about some things -- if not always for the same reasons -- and they can pressure the institutionalists who run both parties. Let's have some antiwar bipartisanship instead of the usual pro-war bipartisanship.

It's hard to be sure just how far Watson's veto on progressives "taking the stage" with libertarians is meant to extend. This is particularly so as his bio-line and résumé highlight his own presumably permissible affiliation with a publication owned and edited by Steve Forbes -- who's historically been wrong not just on economic and environmental issues, but also on criminal justice, gay marriage and many other causes where there's genuine solidarity between the left and right.

Does he just proscribe cooperation among activists? Or organizations?  Or lawmakers?  In person? On paper? In the halls of power?  It's hard to know.

First, some context: I am a progressive.  I was elected to the Providence, R.I., City Council as a Green on a living wage and anti-police abuse platform. I was the lead organizer of the Progressive Caucus when I served in the Rhode Island General Assembly, frequently wore my Jobs With Justice hoodie to the floor. I ran for Congress on an anti-corporatist platform in 2010, and when I lost I co-founded Demand Progress with Aaron Swartz.

I think libertarians are wrong about many causes I care about including workers' rights and economic policy, environmental policy and, perhaps most important, the toxic influence of corporate money in our political system.

They’re wrong about a great deal and need to be opposed on those issues, and we should run lefties against their candidates.

But if we end all the left-right cooperation of the sort that Watson decries, we lose the recent fights against the Stop Online Piracy Act (SOPA), Cyber Intelligence Sharing and Protection Act (CISPA), and war on Syria.  There’s no chance of curtailing the NSA's surveillance regime or amending the Computer Fraud and Abuse Act (under which Aaron Swartz was prosecuted).

We’d also lose much of the new energy pushing to rein in the War on Drugs or put meaningful limits on the use of drones or the indefinite detention of people who've never stood trial.  We might even have Larry Summers in charge of financial policy instead of Janet Yellen, and we wouldn't have audited the Fed a few years back. Anyone who's served or worked in a legislative body knows how important cross-partisan alliances can be in fighting attempts by leadership to institute anti-democratic rules that make it harder to offer amendments or bring bills up for hearings or votes.

My organization helped lead the effort to defeat the Internet censorship legislation SOPA, and in that case, most of the "liberal wing" of the Democratic Party was stuck in the lucrative gravitational orbit of Hollywood and the Recording Industry Association; there were few outspoken Democratic opponents to the bill.  (A few exceptions with names like Wyden, Cantwell, Lofgren and Polis deserve note.)

We had to look elsewhere for support; a watershed moment came when we convinced Tea Party Patriots' then-leader Mark Meckler to send a note to that organization's 900,000-member Facebook following.

It read, "This is very interesting. Left and right both opposing severe government overreach in the area of intellectual property. Have your own website? Maybe the government will shut it down tomorrow ... without any notice to you. Republicans are going to introduce this in the House, Democrats in the Senate. WHAT??? Big Labor, Hollywood, U.S. Chamber of Commerce all in this together ... against you."  That post generated notice and press in D.C., and fomented a snowball of opposition from any number of right-leaning lawmakers whose opposition in the bill’s waning days was much more vociferous than that of their Democratic colleagues.

In the narrow case before us today -- the Stop Watching Us coalition and rally, and the broader effort to end the NSA's unconstitutional surveillance programs -- cooperation between left- and right-leaning lawmakers, organizations and rank-and-file Americans has been absolutely imperative in legitimizing those who oppose surveillance. In late July we narrowly lost an effort to end bulk collection of Americans' so-called meta-data.  The effort was led by libertarian-leaning Republican Justin Amash and progressive Democrat John Conyers, as an amendment to the defense budget. Establishment players like Mike Rogers, R-Mich., and Dutch Ruppersberger, D-Md., the leading Republican and Democrat, respectively, on the House Intelligence Committee, were put on the defensive as they worked with their NSA and military contractor benefactors to stem Amash’s tide -- even hosting NSA head Keith Alexander for a last-second classified briefing for lawmakers.

Behind the scenes, the Stop Watching Us coalition, with Demand Progress playing a leading role, rallied tens of thousands of Americans from across the spectrum to tell their members of Congress to support the Amash-Conyers amendment.

We lost, on a shockingly strong 205-217 vote.  Without Amash and the Republicans who stood with him -- relying on that liberal wing of the Democratic Party alone -- we'd have mustered 111 votes.  That's a walloping that would have delegitimized our cause and made it impossible to inspire anybody to attend this weekend's rally, let alone put some real scare into the NSA.

While the benefits of this sort of cooperation are concrete, Watson never convincingly describes the potential harm. Yes, when those on the left and right meet, perhaps some impressionable young progressives will become more libertarian in their leanings -- but it's important that burgeoning libertarians be made to understand that not all Democrats stand with President Obama, Dianne Feinstein, Steny Hoyer, Nancy Pelosi and other party leaders as shills for the state's surveillance apparatus, and perhaps that (and a few friends they make while marching with lefties this weekend) will encourage them to learn more about, and eventually embrace, progressive economic principles -- post-Keynesians, please.  In fact, this is more or less how I transitioned to the left during college, and away from my own conservative upbringing.

We cannot cover up harms perpetrated by our government just because pointing them out might make some people more inclined to distrust the state.  If we hope to maintain enough credibility with voters to one day win progressive majorities at the ballot box then we must not shy away from naming state overreach and corruption where it is transparently manifest.

So I'll keep looking for opportunities to build these left-right alliances: The alternative is a future where much hard work must still be done to achieve economic justice and sensible environmental policies -- but in which we're impossibly fighting for those causes under persistent surveillance, using an Internet that is aggressively censored, and while we're raining bombs on (the next) Syria.

David A. Segal is executive director of Demand Progress, a million-plus member Internet freedom/civil liberties advocacy group. He has served as a member of RI General Assembly and Providence City Council.

MORE FROM David A. Segal