I don't stand with Russell Brand, and neither should you

I love much of what the boisterous comedian says, but this Great Man narrative lets sexism slide and has to go 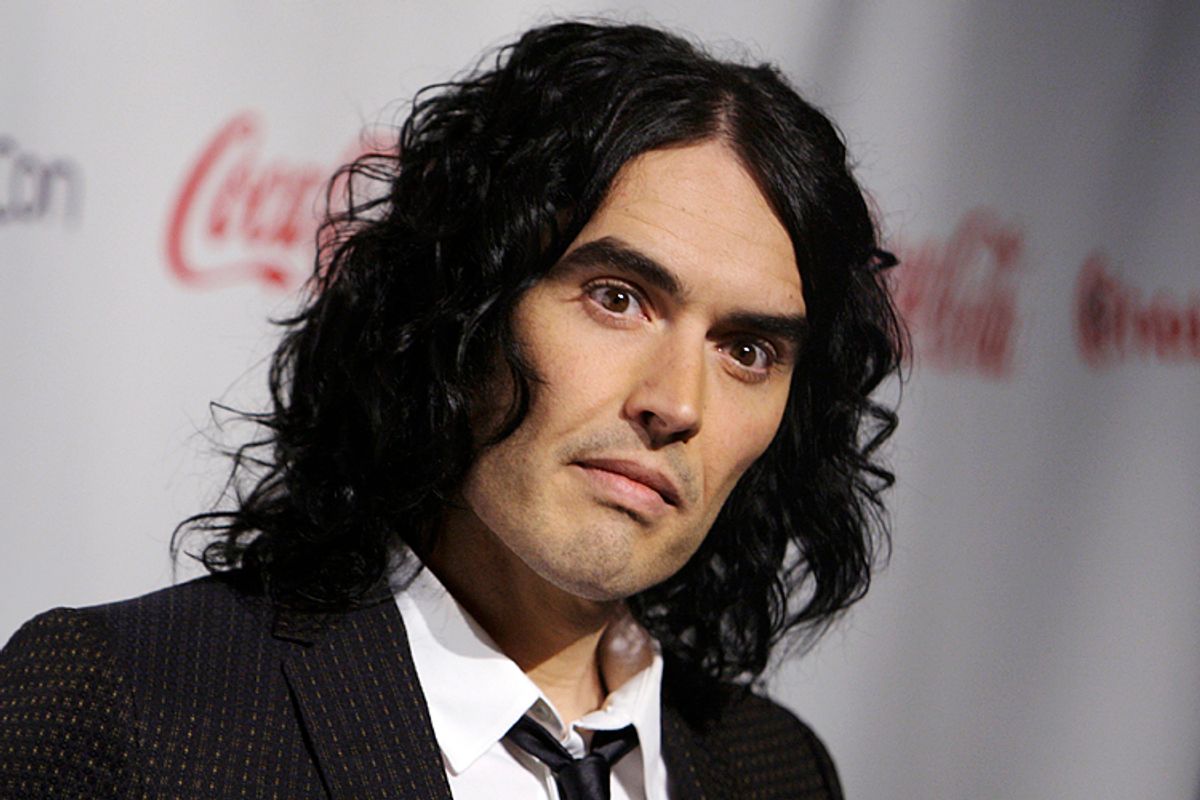 I felt an immense affinity with comedian and would-be revolutionary vanguardist Russell Brand as I watched his BBC Newsnight interview with dismissive interlocutor Jeremy Paxman. In a highly public forum, Brand ran the frustrating gauntlet of explaining the very basic tenets of radical politics to a defender of the status quo. It's a maddening position to occupy -- as Brand's intensifying eyes and harried stares at Paxman evidenced -- and it's a position all too familiar for those of us who have ever identified with anarchism or a radical politics that refuses a predefined program.

Like Brand, I don't vote (I'm British, but even if I were American, I wouldn't). Like Brand, I will not give my mandate to this festering quagmire of a corporate political system (any more than living in it already demands, that is). A thorough anti-voting argument is beyond the remit of these paragraphs; suffice to say there are other ways and hows to enact politics. And, like Brand, I refuse to say what I propose instead when badgered by staunch defenders of capitalism. Brand patiently explained to his pompous interviewer that, no, we can't offer you a pragmatic alternative program -- we're too entrenched in the ideology of the current one. We have to live, act, think differently, dissentfully, for new politics to emerge. I'm simplifying, of course. But the point is, I've learned to leave conversations when the "what do you propose instead?" question is posed to me qua anti-capitalist. If you had a blood-sucking monster on your face, I wouldn't ask you what I should put there instead. I'd vanquish the blood-sucking monster. And it seems Brand is committed to do the same.

I have no interest in a detailed discourse on the comedian's radical politics as expounded in his editorial essay this week in British left-leaning news magazine the New Statesman. He's not a theorist, he's a well-intentioned, wildly famous performer with a "fuck this" attitude and some really nice thoughts; he's self-aware and self-deprecating. He'd probably even be there on the barricades pushing off riot cops. And that means something to me and a number of my comrades (yes, comrades; deal with it). But, no, I'm not jumping wholeheartedly on this Brand-wagon. The reasons are two-fold:

Firstly, if we want to challenge an inherently hierarchical political framework, we probably don't want to start by jumping on the (likely purple velvet) coattails of a mega-celeb with fountains of charisma and something all too messianic in his swagger. "No gods, No masters," after all. Brand is navigating the well-worn conflict facing those with a public platform in the current epoch (myself among them): We have to be willing to obliterate our own elevated platforms, our own spaces of celebrity; this grotesque politico-socio-economic situation that vagariously elevates a few voices and silences many millions is what Brand is posturing against. Would he be willing to destroy himself -- as celebrity, as leader, as "Russell Brand"? I think he'd struggle, but I don't really know the guy.

But beyond this -- the general furor and excitement around famous-person Russell Brand saying not-dumb political things on TV should give us pause for thought. If we're so damn excited to hear these ideas in (in their slightly haphazard form) from a boisterous celebrity, then clearly we have some idolatry and "Great Man" hangups to address (lest we reinstate a monarchy with Brand as sovereign, Kanye as chief advisor). Everything Brand has said, I've heard before, especially since Occupy's 2011 heyday; the radical suggestion that, yes, "Shit is fucked up, and bullshit," was not first uttered by Brand and should not be more exciting nor appealing by virtue of emerging from his cheeky smile. As has often been pointed out, there is a constant conflict at play when radical or militant ideas or images enter the popular imaginary under capitalism (I've noted the example here before of a riot scene in a Jay-Z/Kanye music video): At the same time radical ideas might spread and resonate across mainstream and pop media platforms (and thus provide the potential for rupture), these ideas and images are recuperated immediately into capital. Brand calls for revolution, and online media traffic bounces, magazines sell, bloggers like me respond, advertisers smile, Brand's popularity/notoriety surges, the rich, as ever, get richer.

Secondly, and more immediately worthy of attention given current Brand fever: His framing of women is nothing short of the most archetypal misogyny. I'm not asking Brand to be perfect, but I am asking that we temper celebrations of him according to his very pronounced flaws. Writer Musa Okwonga, responding to Brand and possibly coining the term "Brandwagon" was swift to elevate feminist concerns, too often ignored in the excitement around a celebrity appearing to have good politics. Okwonga noted:

... what the writer Sarah Ditum has identified as [Brand's] “lazy sexism,” evident both in his celebrated MSNBC appearance and in the opening line of his New Statesman guest editorial. Right there, beneath a sub-heading which states that “before the world, we need to change the way we think,” Brand writes that “When I was asked to edit an issue of the New Statesman I said yes because it was a beautiful woman asking me.”

See, here’s the thing. I and others will run the risk of sounding like killjoys for pointing this out, but if you’re advocating a revolution of the way that things are being done, then it’s best not to risk alienating your feminist allies with a piece of flippant objectification in your opening sentence. It’s just not a good look.

Brand, admirably, is not proposing a program. But Okwonga is right: In our excitement for even a hint of revolutionary fervor ostensibly permeating mainstream debate, we've enabled misogyny and Great Man narratives to go unchecked. This is troubling ground to build if we want to fight from it. And, of course, it's not only through this week's Brand hagiographies that "lazy sexism" has been troublingly permitted in the name of radical politics -- it's pervasive. Take, for well-worn example, the ongoing yet baffling difficulty many supporters of WikiLeaks and pro-transparency projects seem to have with any criticism of Julian Assange; the willingness with which thousands of Assange acolytes outright rejected sexual assault claims against him. To avoid another maelstrom myself, I simply posit: It is at least logically possible for a man to both be a sexist creepbag and espouse some good political ideas and projects. I don't mean to draw any strict equivalences between Brand and Assange. I could list a whole host of examples: Recall the viral spread of the "Stand with Rand" sentiment, when Sen. Rand Paul mounted an epic filibuster of John Brennan's nomination to CIA director. I too stood with Rand's critique of the Obama administration's unchecked executive power when it comes to drone kill lists. But I don't stand in any solidarity with the racist Kentucky Republican.

But the point of rethinking new political and social spaces together -- as was felt profoundly by many of us engaged in Occupy's headiest, fiercest days -- was that we don't need to align with, elevate, celebrate (nor indeed wholly reject or detest) any one person. Yes, we will continue to struggle against vanguardism and sexism and so many co-constitutive problems within ourselves and each other. We will fail and fail better and fail. We will struggle to know and reconstitute what "we" even really means. And I take Russell Brand at his word that he wants to fight too. This is no referendum on the comedian or his intentions. But this is no time to forgo feminism in the celebration of that which we truly don't need -- another god, or another master.