Meet the worst movie ever made

In Hollywood's long history of star-studded "devil's candy" movies, there's nothing as terrible as "The Counselor" 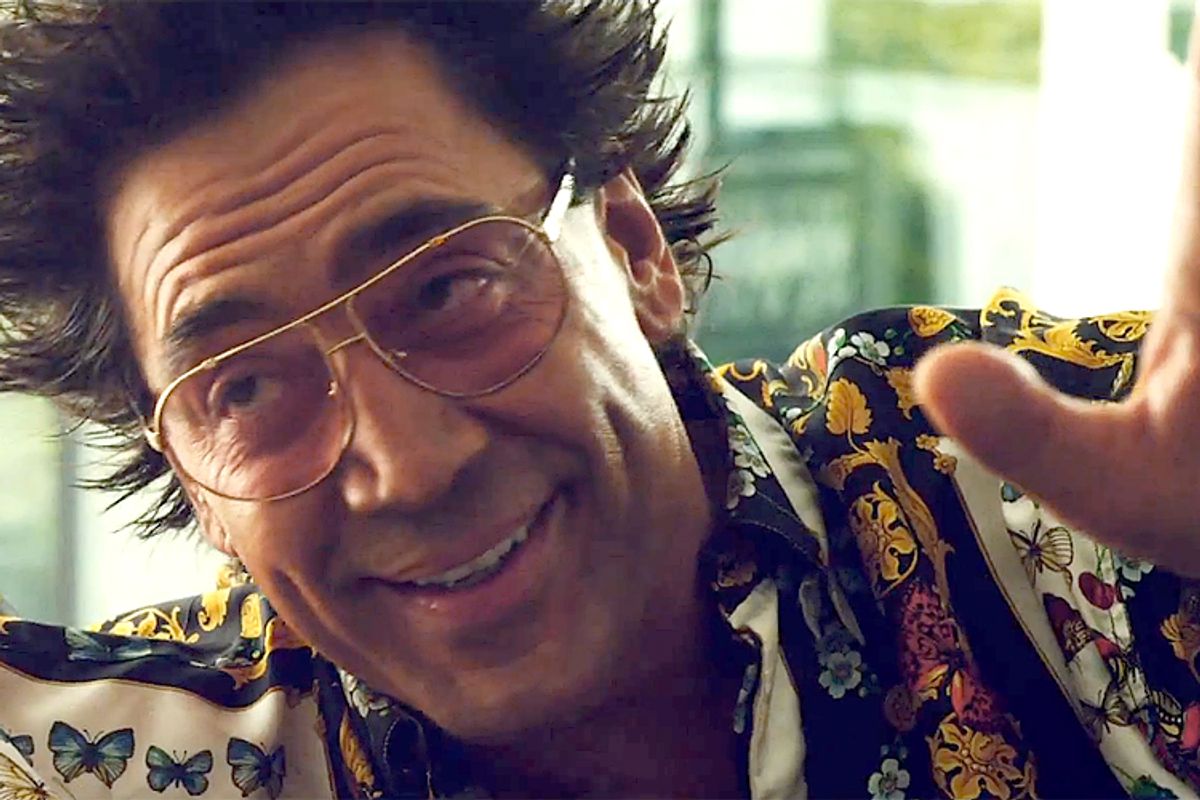 From the opening shot of Ridley Scott and Cormac McCarthy’s “The Counselor,” in which Michael Fassbender and Penélope Cruz are supposedly rolling around under the sheets — while their disembodied voices on the soundtrack are clearly coming from somewhere else — this is a movie that urges us to walk out and do something else instead. It’s as if Scott, McCarthy and their all-star cast, which also includes Brad Pitt and Javier Bardem, could not stop themselves from making the worst movie in the history of the universe (or at any rate, one of the worst I’ve ever seen). Yet at the same time, they felt honor-bound to poison the well subtly by turning the film into a self-referential commentary on its own terribleness. This is simultaneously an empty and meaningless mainstream atrocity and a work of brilliant cultural subversion (although I’m not saying the latter was intentional or conscious).

Employing a dreadful Texas accent he seems to have gleaned off early-‘90s TV back in Killarney, Fassbender plays a sharp-dressed El Paso lawyer with few distinguishing characteristics and no name, who gets involved in a murky and obviously doomed drug deal whose details are never explained. The fact that this dude is ubiquitously addressed as “counselor” appears to be a labored reference to the famous scene between Mickey Rourke and William Hurt in Lawrence Kasdan’s 1981 neo-noir “Body Heat,” which is the kind of movie this one is trying, and failing, to become. It’s like watching a walrus try to become a ballerina, except that at least a walrus makes a good walrus. Anyway, the drug deal goes bad — just once in my life, I’d like to see a movie where the drug deal goes well — and the Counselor suffers the torments of Job, with about the same level of explication but less drama and worse writing. Way worse writing; in the pantheon of terrible writing by supposedly good writers, McCarthy’s labored screenplay for “The Counselor” will forever hold an honored spot.

There are a couple of decapitations in “The Counselor,” possibly as many as three, along with two shootouts, one of them entirely non-germane to the so-called plot. Oh, and there’s a scene where a woman has sex with a car. We’ll get to that. But the narrative of the film is almost entirely discursive, and largely consists of the Counselor sitting around with his obviously crooked associates —Pitt in a dingy white suit, stringy hair and a black eye; Bardem in hilariously ugly designer duds, accessorized with girly cocktails — having stilted, stylized conversations about women and money and snuff films and the meaning of life that don’t go anywhere. It’s like a mumblecore movie about a bunch of Sarah Lawrence philosophy majors, made by coked-up rich people for 100 bajillion dollars.

But what finally dawned on me is that for the first half of the film, everybody repeatedly warns Fassbender that he shouldn’t do what he’s about to do — that he’s about to cross a fateful line and there’s no going back, etc. — and in the second half everybody tells him that he’s done it and it’s too late, and now he has to accept a really awful new reality. In one of the last scenes, when the Counselor’s debasement is almost complete, he sits weeping in a car in Ciudad Juárez with a phone pressed to his ear, listening to a lengthy monologue delivered by Rubén Blades, playing some kind of Mexican drug lord. McCarthy really thinks he’s writing up a storm here; the speech goes on and on, signifying nothing beyond sorry dude, you’re screwed. Fassbender, here as throughout the film, stands in for the audience in his blankness, his pigheadedness, his lack of qualities. We were repeatedly told it was a bad idea to watch this movie but we went ahead and did it anyway, and now it can’t be undone. As Blades’ pseudo-Shakespearean soliloquy more or less puts it, whose fault is that?

Some film-world corollary to Murphy’s Law appears to be in operation here, and if “The Counselor” is a sterling example, it’s far from the only one. I think it works like this: Anytime producers and executives feel certain they’ve preassembled a great movie, they’re wrong. I suppose some bigwig in Rupert Murdoch’s Fox empire signed a contract with Scott, McCarthy and producer Nick Wechsler — I’m thinking a cocktail napkin from the Chateau Marmont or the Polo Lounge was involved — and went back to the office believing he’d bitten off a big, juicy chaw of the devil’s candy.

I don’t know whether all the big-name stars were attached to “The Counselor” at that point, but as the project moved along it seemed to glow with infernal luster. The director of “Alien,” “Blade Runner” and “Black Hawk Down” plus the Pulitzer-winning author whose novels have already yielded one Oscar-winning near-classic film, the Coen brothers’ neo-western “No Country for Old Men.” (Now, it could have been said, even before all this, that those two guys have a tendency toward bloat and self-indulgence, which might interact poorly. But who could have known how bad it could get?) Throw in not one, or two, but three of the hottest male stars in the business, each of whose wardrobes for this film could fund a dozen indies, spinning a tangled Tex-Mex saga of drugs, money, sex and death.

What could possibly go wrong? Well, nothing and everything. “The Counselor” is a uniquely and almost impossibly bad movie precisely because the talented and laurel-bedecked people behind it made exactly the movie they wanted to. Nobody gets to blame the budget for this one, or inexperience, or technical ineptitude. “The Counselor” is not corporate-crafted cynical crapola designed to deliver a quick payday, after the fashion of most Hollywood movies, which are bad because no one involved claimed authorship, took responsibility, or actually gave a damn. If you eat dinner at Burger King and the food sucks, it’s disingenuous to get all mad about it. This is more like having Alice Waters and Mario Batali labor in the kitchen for a while and then serve you a gray-green burger on Wonder Bread, with what looks like somebody’s pubic hair stuck to it. But surrounded with whimsical garnishes of fresh herbs.

From its early helicopter shots of Ciudad Juárez to its entirely gratuitous London street scenes (featuring decapitation!), “The Counselor” oozes expensive production design, grade-A cinematography, literary pretension and philosophical pseudo-profundity. All those elements contribute to the gelatinous, turd-like final product, but the secret sauce is the movie’s certainty that it contains meaning or has something to say, when it’s really more like the nihilistic erasure of meaning. Even counting the already infamous scene in which Cameron Diaz humps the windshield of a Ferrari, while Javier Bardem stares at her genitals, goggle-eyed and disbelieving, from the passenger seat — it’s like an outtake from a suppressed Jerry Lewis porn film — this isn’t a work of miscalculated camp excess, after the fashion of “Showgirls.”

Diaz is kind of supposed to be playing an evil, tattooed, bisexual vamp, but she doesn’t get much screen time and feels painfully miscast. Anyway, she has to sit around delivering McCarthy’s turgid and overcooked dialogue, instead of doing anything to justify her outrageous outfits. There’s one scene between Diaz and Cruz, playing Fassbender’s ladylike and almost virginal fiancée, that delivers a faint flicker of trashy allure. But despite its location photography and lustrous design aesthetic, “The Counselor” has a puritanical devotion to boring and frustrating the audience that rivals the mid-‘90s video work of Jean-Luc Godard. Instead of having sex or even talking about sex — the dynamics of the scene might call for Diaz to tell Cruz exactly what she’d like to do to her, but not do it — the two women talk around the idea of talking about sex. (There’s a later scene in which Diaz’s character tries to confess her abundant sins to a priest and he won’t listen.)

I suppose it’s dimly possible that Scott and McCarthy have deliberately crafted a movie that looks like a mainstream entertainment but is in fact some work of deliberately unsatisfying postmodern gamesmanship. But it’s not likely. In the movie business, that phrase I used earlier — the devil’s candy — connotes the magical combination of artistic legitimacy, cultural currency and commercial success. Everybody in Hollywood chases it, and as in Julie Salamon’s terrific book of that title, about a big-budget failure of another era (Brian De Palma’s film version of “Bonfire of the Vanities”), almost nobody gets hold of it. What’s implicit in the term, of course, is the idea that the devil’s candy isn’t worth getting in the first place, that it’s a trick designed to lure the unwary into the pits of hell.

Cinema history is full of devil’s-candy productions that became seen as flops or disasters, from D.W. Griffith’s “Intolerance” to Joseph L. Mankiewicz’s “Cleopatra” to “Heaven’s Gate” and “Ishtar” and “John Carter.” Well, those movies are masterpieces, each and every one, compared to "The Counselor." I'd watch them all straight through, back to back and several times over, if I didn’t ever have to see this again. If it’s not objectively the worst film ever made — because that’s an impossible standard — it might be the worst of all devil’s-candy films, the worst ever made by people this talented. And we were warned! Early on, in answer to Fassbender’s expressed desire for money or experience or whatever, Brad Pitt’s skeezeball character offers this splendid retort: “I’ve seen it all, Counselor. It’s all shit.” Exactly.