"Big Sur" star Jean-Marc Barr: "I’ve been living Kerouac all my life. So there was nothing to play"

The actor talks to Salon about Twitter, celebrity, and why reading Kerouac made him skateboard more 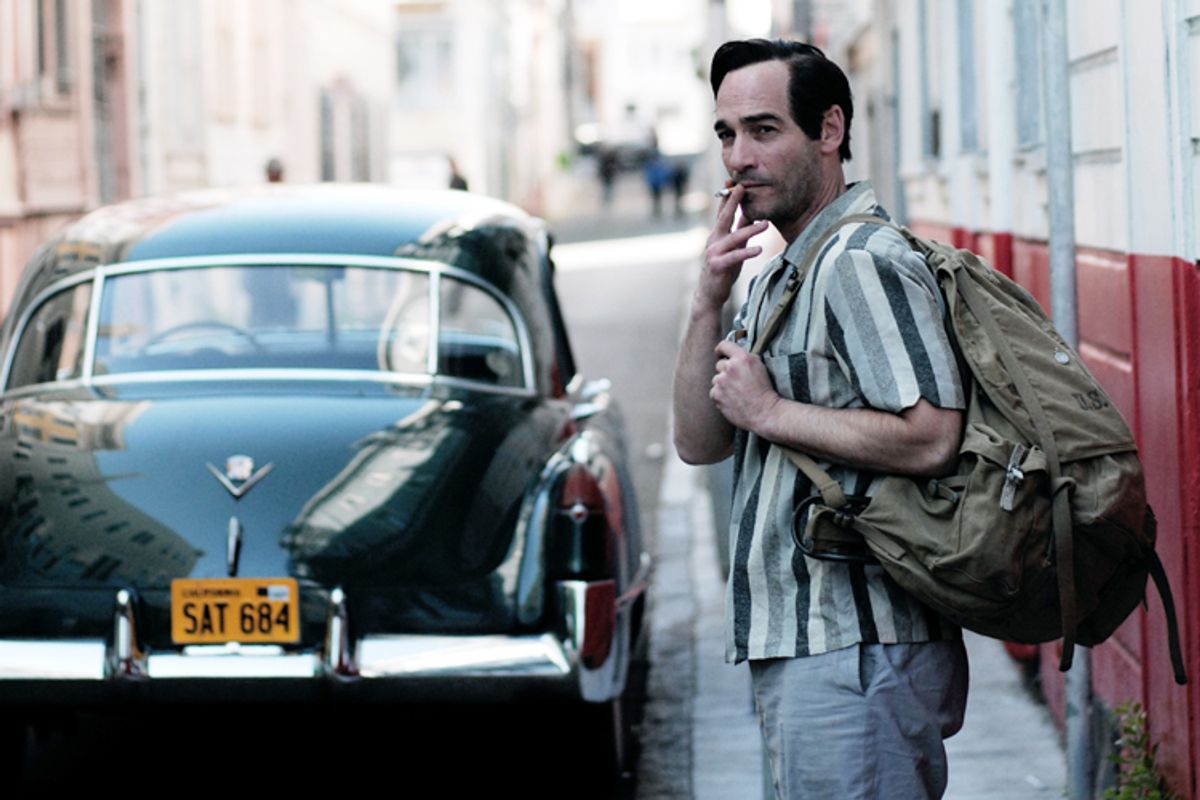 Jack Kerouac has been the subject of more than a dozen films. However, most of these have concentrated on the years before and during "On the Road." In Walter Salles’ recent adaptation of Kerouac’s classic novel, Sam Riley played Sal Paradise/Jack Kerouac as a passive observer who, eventually, furiously pounds out a masterpiece on his typewriter scroll. In John Krokidas’ "Kill Your Darlings," out now, Jack Huston portrays Jack as a merry college prankster, a guy who throws a football indoors to his fellow Beats. These young actors look lost trying to play the late, great writer. Their performances feel phony, kid stuff, not lived in.

Perhaps filmmakers depicting Kerouac have been looking at the writer’s life and work through the wrong end of the telescope. The adventures Kerouac and his co-conspirator Neal Cassady had traveling across America, rejecting conformity and finding themselves, are certainly important and entertaining. To truly illuminate the mythical character of Kerouac, however, it is far more revealing to see what the overnight celebrity and fame did for — and to — him.

Kerouac did this in his 1962 novel "Big Sur," which has now been adapted for the screen by Michael Polish ("Twin Falls, Idaho," "Northfork"). This fantastic short novel describes Kerouac’s experience at poet/publisher Lawrence Ferlinghetti’s California cabin. He holes up there to get away from “the endless enthusiasm of young kids” for his book, "On the Road." Kerouac acutely describes his solo experiences with everything from a ratty sleeping bag, bad weather and critters to blisters, Buddhism and his penchant for booze. The author’s writing is vivid and textured. "Big Sur" is full of loneliness and regret, episodes of delirium tremens, and a crippling depression that aches on the page like a throbbing hangover.

Polish has crafted an equally moody and stunning film. He also cast his Kerouac perfectly, hiring the magnetic actor Jean-Marc Barr, who, like Kerouac, is half-French, Catholic and even played football in school. Barr deftly conveys the writer’s restlessness but also his exhaustion, depression and drunkenness. When he flops face down into a mattress in "Big Sur," the weight of his body is palpable. The strength of Barr’s performance goes beyond his artful body language. Reading chunks of the novel in voiceover, Barr captures the rhythm of Kerouac’s rushed cadence. The actor speaks as if he is trying to dictate his words as fast as Kerouac typed them.

What about reading Kerouac spoke to you?

I came from a background that was military and Catholic. I read Kerouac in college — Humboldt — and that was a passport: It told me that I should have been feeling what I tried to repress. I left the States after attending UCLA for one year and went to Paris. I was satisfying my curiosities like Kerouac and Henry Miller, but I didn’t have to do it surreptitiously.

Kerouac has become something of a myth. How do you see him?

For me he’s a superhero — like these people who, after WWII, lived so intensely that they could not stop. Vladimir Vysotsky was a great Russian actor and singer. Richard Burton, who couldn’t stop, said, “I smoked too much, I drank too much and I fucked too much” — and he died at 58. They were linking freedom to intellectual, sexual, and spiritual pursuits. The States were not used to that.

When you play a “real” character like Kerouac here, what is the secret to “finding” him? Do you judge his actions or discover identification points?

I relate him to me in the melancholy that one has when one has decided to sacrifice everything for one’s art. I understand him on that level. You’re more in tune with your loneliness because it is the only way to nourish your art and evolve. In many ways it’s a dangerous choice. I identify with that. I was a celebrity overnight with "The Big Blue," and I decided why I didn’t want that. Instead, I took chances in Europe to work with Von Trier and make my own movies.

Why did you decide to step out of the spotlight?

"The Big Blue" made me a celebrity in a strange way. I was considered French in the U.S., and yet I grew up here. If I did Hollywood films, I would get money, but it would be over in five years. I was a realist, and I wanted to be involved in my work. That took me to Lars Von Trier and participating in something that was more appropriate and independent.

What do you see as the difficulties of being a famous writer, actor or celebrity?

It takes all your time to live as an artist. The other person is totally frustrated. Jack was a huge egotist. In his love affairs, he married once to get out of jail. The second time, he had a kid and left. Jack had the gumption of going to places other people didn’t. He was Icarus, who flew too close to the sun. He had the knowledge of that, but paid a price. Celebrity destroys art. Hemingway and Monroe lived up to their image, and it says something that twentieth-century celebrity culture smothers artists — look at Basquiat!  Celebrity makes you feel infallible, and then you realize that you’re not. What is better: the reality or the myth? People want to remember the myth.

Kerouac’s inability to love Billie (Kate Bosworth) in "Big Sur" is really an expression of his inability to find peace and happiness with or by himself. What do you think his goals are in life?

His main objective in life was to be known as a writer — a great writer — and it obsessed him. He knew how to put words together that sounded good. He sacrificed himself in many ways — the bennies [Benzedrine] he took to write the way he did on those scrolls, the intense parties. Once he realized what his success was, he was caught in a trap — and that trap [became] alcoholism.

What lessons do you take from Kerouac?

The journey gives you the value of your life. You’re not making money, but experiences give you a value that is unmatchable.

Your voiceover narration and your body language in the film were really remarkable. Can you describe your strategy for playing Kerouac?

I had an advantage on "Big Sur" in that I lived the twentieth century for 40 years. I knew that century. The more I read about him in biographies and books, the more I realized I’ve been living Kerouac all my life. So there was nothing to play. In doing Kerouac it was not to imitate but to generate and illuminate my vision of Kerouac. The real test — because in spite of it all, he’s an alcoholic — was to “dose” it in such a way that I wasn’t repeating: you see the good side and the bad side. He was doing a slow suicide on alcohol. In Kerouac’s last interviews on YouTube, there was a real indifference in his voice, a real futility. That he’d lived it all, and the alcohol was a balm.

How do you think the film presents Kerouac and his legacy?

This film — for an American film — is rare. It gives you that bitter taste of death, and that’s not a salable item. "Big Sur" is a beautiful example of American literature. The book gives you the impression of ecstasy and death in your mouth. Writers today are muffled in terms of the cinema. Producer Orian Williams had stars working for minimal wage. Jack inspired each person’s life, and created the chemical reaction that made the film. A lot of people came to define their spiritual freedom, and that’s been snuffed out — maybe that’s why Kerouac is important now. That subversiveness is important now. "On the Road" idealized the euphoria of youth.

Do you keep a diary as Kerouac does in "Big Sur"?

No. I used to. But even when I tweet, I find it to be too egotistical, and I had nothing to say. So sometimes I try to write. I tweet to be literate, and I try to pass an emotion to say, “I’m here and having a great time.”

Kerouac seeks isolation (and booze) in Big Sur. He tries to find himself through long walks in the woods, and yet, he cannot resist the lure of the city. You regularly go roughing it, but in crowds — attending the annual Burning Man festival. How do you feel your experiences parallel Jack’s wanderlust?

It’s the West. Nature is so much stronger and more majestic here. You feel so insignificant. Even making "The Big Blue," and being 30 meters under the water, I felt so insignificant. There is something in the desert and in California; it’s a mythical place. Big Sur is the West of the West. Burning Man is surviving in the West in the desert with other people in a joyous, generous atmosphere that lasts a week and gives you the possibility of reliving the emotions of what the pioneers were going through and their desire for creating something new. In all the chaos of Western history in the last 30 years, the only thing that has given me any solace is the transcendentalists of the 1830s — Emerson and Thoreau — who let nature help their decisions in life, like the Indians did. It’s a more healthy way of looking at life than we do. Jack was a mentor, and he and Neal made road trips magic. And that, in a strange way, is my own life. I’ve been on the road. I was born on the road. I’ve always been moving. My home is the road. Nothing is fixed. Nothing is fixed.

Kerouac finds pleasure in the sounds of the sea in Big Sur, and the taste of the creek. What gives you pleasure?

Doing nothing. It’s an art. We’re so ingrained to move and do things. This is what Jack taught me. I have doing-nothing binges. That’s where I think. I listen to music. I write, I skateboard, I do nothing. I’m alive — right now. If I fall and get hurt, my whole being feels it. I read and I am taking the time to live. After "The Big Blue," the strangest thing was that I asked my heart what it wanted and it came up: Retire now.