The guy responsible for the worst of Politico is being promoted, which actually might be a good thing 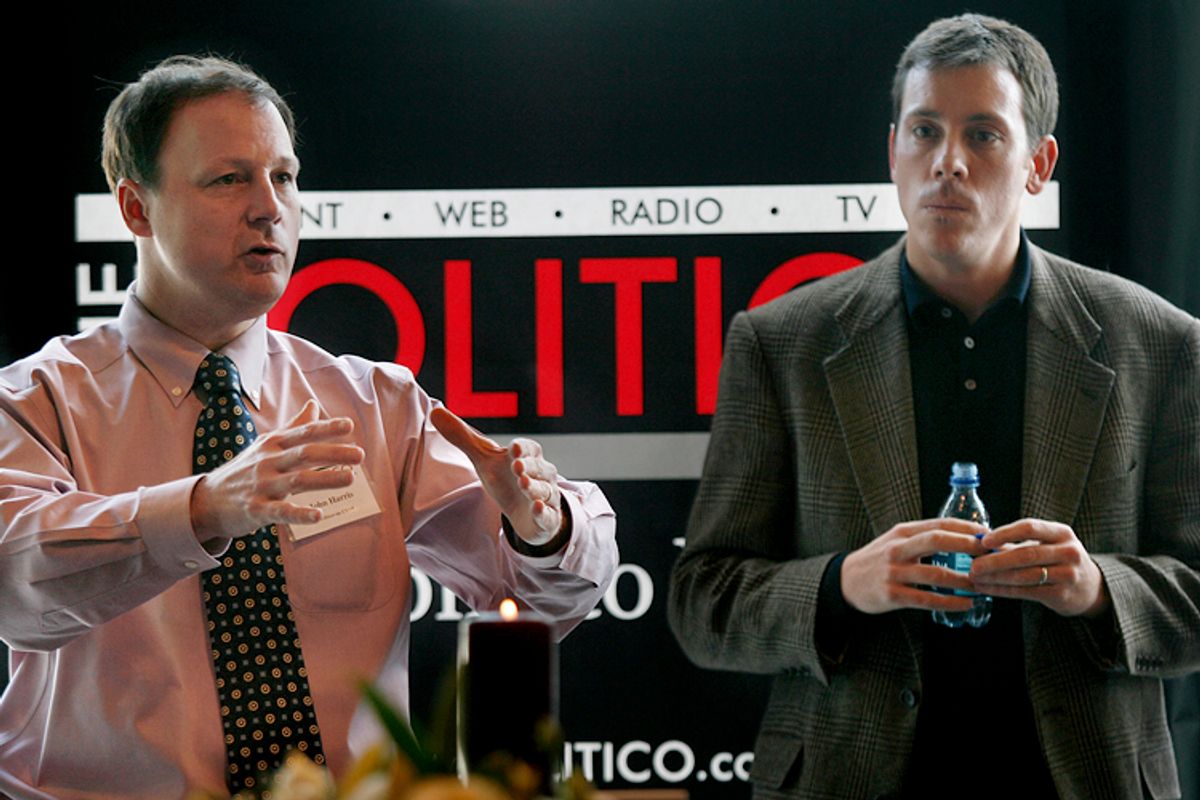 Monday was an exciting day for professional haters of Politico, the famous website and newspaper. There is a new memo! Politico memos are their own little literary genre. Usually composed by Politico's co-founding editors, John Harris and Jim VandeHei, these internal (but always leaked) communications are heavy on obnoxious management buzzwords, ridiculously unjustified boasting, and occasional slightly psychotic-sounding exhortations to WIN. They are generally light on self-awareness, and directives to produce quality journalism.

Though in a Politico memo, "quality" is measured in eyeballs, and the importance of the owners of those eyeballs. The original and still funniest memo wasn't from the co-founders, but from star newsletter-author Mike Allen. It is heavy on the all-caps, and clearly un-copyedited. ("The REWARD for cracking this code is that you're part of an enterprise that is already famous and respect....") It tells reporters that the first question they should ask themselves when starting a piece is, "Would this be a 'most e-mailed' story?" It refers to "mindshare."

This new memo is from Jim VandeHei, formerly the executive editor and now the CEO of the entire company. It is about "the culture of Politico," and in it VandeHei attempts to explain what makes Politico great and instruct his employees on how to make it even better. Nothing in VandeHei's memo speaks to the actual work Politico is supposedly engaged in, which is reporting. It could be a memo from the CEO of a company that makes iPhone games, or complex financial products. "We work for a hot brand doing important work with some of the smartest people in the world." "People who thrive here are highly talented, self-motivated doers who are brimming with passion and a desire to win."

"My job is to set a broad vision of where the company is going," says VandeHei, "and then help others spread it through every corner of the place." In other words, he is going to be paid a huge amount of money to think real hard about his news organization's "culture," and send out memos on the subject, and probably hold a lot of meetings, conferences and retreats.

As to the culture of the place, the memo features a version of the notorious BuzzFeed "no haters" rule: "We have learned the hard way that people who whine, project negativity or are complacent hurt the company, no matter how talented they might be at an individual task." No matter how talented you are at a "task" like reporting, or editing, if you project negativity, you are hurting the Culture of POLITICO. (As professional Politico hater Erik Wemple points out, this is basically a rather harsh attack on everyone who's left Politico recently.)

While he will remain a grossly overpaid fount of meaningless clichés, and indeed he will likely now be an even more overpaid one, VandeHei's abandoning the editorial side to take charge of the business side is, in a way, good news. It is perhaps bad news for people who actually have to work at Politico, what with the enforced relentless positivity and constant "blunt," "candid" written and in-person reviews, but it could be good news for the country, because it is VandeHei's editorial sensibilities that have led to much of what is broadly "wrong" with Politico.

It was VandeHei, paired with his star pupil Mike Allen, who teamed up to launch "POLITICO PRIMARY," a deeply funny attempt to "harness the public's hunger for something new, different and inspiring" by putting forth potential presidential candidates like ... Erskine Bowles. And David Petraeus. And Condoleezza Rice. It was incredible.

The entire ideology of VandeHei and Allen -- one they feel comfortable expressing repeatedly while still claiming to be purely objective, because that's how Washington journalism works -- is summed up in the Politico Primary. From their blurb for Bowles: "The most depressing reality of modern governance is this: The current system seems incapable of dealing with our debt addiction before it becomes a crippling crisis." Interesting take! This deeply conservative "centrist" worldview also explains the piece from last December arguing that "tax reform" and "much deeper Social Security and Medicare changes than are currently envisioned" and "trade agreements" and more oil and gas extraction would all generate an economic boom. (It is also hilarious that the only regular columnists in Politico's "Opinion" section appear to be Joe Scarborough and Rich Lowry. What a wonderful diversity of viewpoints!)

But VandeHei's ideology is less objectionable than his news sense and his editorial standards. The classic Politico move is to simply invent a story from nothing, or next-to-nothing, to create "buzz," and then to report on that "buzz." VandeHei and Allen's 2012 election coverage was based entirely on crafting "narratives," which changed from day to day. None of it was remotely informative. VandeHei and Allen eventually actually bragged that a piece they'd written a few weeks earlier "doesn't matter," but got a lot of page views anyway.

This stuff isn't just stupid, it frequently becomes outright dishonest, as when Mike Allen invented the rumor that Barack Obama might appoint Hillary Clinton to the Supreme Court. There's no journalistic argument for telling people that things that aren't going to happen might happen.

Thankfully, VandeHei will be replaced with New York Times veteran Rick Berke. Berke is beloved in the Times newsroom and has a lot of experience in a workplace "culture" that values accuracy and quality over sensationalism and eyeballs. Let's hope Berke, a rather staid Times lifer, discourages the sort of sensibility that leads to stories like the one that helped to popularize the the myth that Congress sought to "exempt" itself from Obamacare. That's what happens when you chase mindshare. Sometimes, to turn a piece of boring information into something that people WANT and NEED to read (and share), you end up distorting the information.

To help everyone there deal with such a major organizational change, I have prepared my own memo to the staff of Politico:

I wanted to share my thoughts on the culture you are building there at POLITICO. First of all, it is very silly that you always capitalize all the letters in POLITICO and it is always cringe-inducing when bosses talk about "cultures." Your new CEO, Jim VandeHei, sounds like a nightmare person to work for, but then, you probably know that already, because he is the co-founder of your newspaper and has been one of its top editors since its launch. I just wanted you all to know that you work for a news organization, and your job is to produce journalism about politics. You "win" by writing timely and interesting stories, and by reporting new information accurately. The end.