When should a young writer write for free? 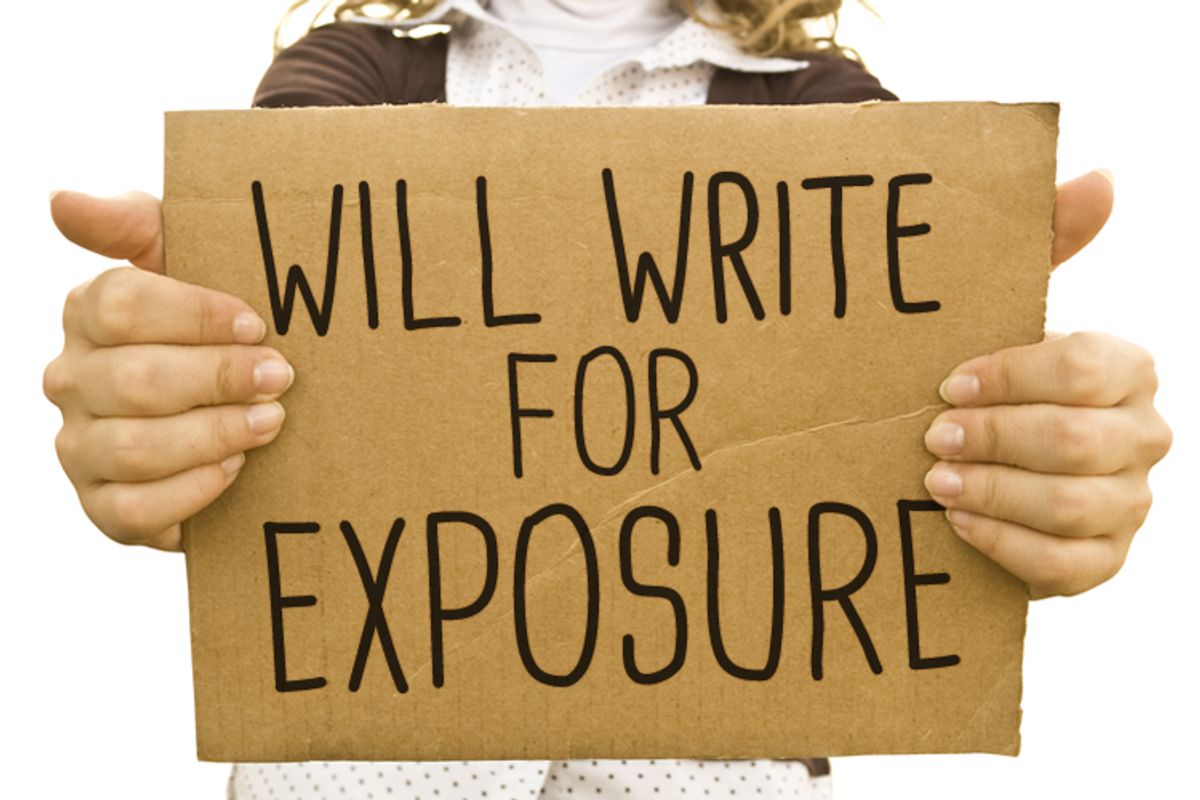 On Sunday, a freelance writer was, presumably, paid for his work; it’s becoming a rare thing. Tim Kreider published an essay in the New York Times dictating that writers ought never write for free. Kreider’s analogies were striking in their oddness. His headline referred to those who write for free as “Slaves of the Internet” and compared editors starved for content and unable to pay their writers to people asking strangers “to give them a haircut or a can of soda at no cost.” He ultimately revealed that the piece was aimed at younger writers just starting out, whose actions, he felt, could degrade what people are willing to pay or could help encourage fair compensation. “Don’t give it away,” Kreider wrote.

The piece was striking, too, for the privileged position from which it was written. Kreider began publishing a long-running comic strip in 1994; he’s published a book of essays and written for outlets like The New Yorker online and Men’s Journal. His website lists Times bylines as early as 2006. If Kreider wants to decline writing for free, that would seem to be his choice.

What about those writers, though, who don’t have the same options or clips -- who got started later than Kreider, perhaps significantly, and who are presented with far fewer opportunities to write for outlets that pay as a matter of course. Should they refuse, as Kreider asks them, to “give it away”?

The answer, gleaned from asking actual twentysomething writers, seems to be “sometimes.” “There's a thin line between being tenacious and being taken advantage of,” said Katie J.M. Baker, a staff writer for Newsweek, who'd made a rule about not writing for free after she graduated from college. “If I hadn't written some articles for free, I would've had fewer clips, and clips are what got me jobs. If you're writing for free, I think it's really important to be choosy about WHERE you're writing; I wrote [for free] for The Awl once after I graduated, breaking my rule, but that piece was well-received and got me cred.”

Indeed, young writers seem comfortable with the idea that there are special exceptions to hard-and-fast rules. “I think exposure can be valuable, but if you're writing for no pay and only exposure you've got to have something great on your hands,” said Myles Tanzer, an editor at BuzzFeed, who noted he had, historically, written for free for The Awl (a site which now pays contributors), because he loved the website. “I don't think there's a point to writing for exposure if your basic post is going to get buried in 15 minutes.”

“if I have something that I really want to write — that I really believe in — and the best way to get it out involves not being paid for it, I'm willing to do that,” said Sam Lansky, an editor at the music blog Idolator. “Writing for free always tends to sting a little bit, I think, but if it's for a friend, or a piece about which I feel passionate, I'll make exceptions.”

Baker, of Newsweek, recently wrote for free for a friend’s publication for fun, though she admits she “turned it in super late.”

That friend, Sarah Nicole Prickett, told me, “The magazines that pay you the best are not always those that make you write better. Often they have the biggest audiences, and so their edits are intended to make the piece not strikingly original, but simple and straightforward. If simple and straightforward is the aim, fine. It's not my aim.” She noted that Kreider “didn’t mention any of that.” Her magazine, an independent publication called Adult, did not pay some writers, and paid others less than Prickett might have liked. “Some people, mostly my friends and poets,” said Prickett, “contributed and asked for nothing.”

“There's sort of a checklist,” said Prickett, of deciding to take assignments. “Will I learn something? Will I be able to write really well, or ideally, forced to write better? Do I care? Does anybody else care? Will anybody still care next week? And not least, but not first either, will I get paid enough?”

And, sooner or later, everyone will end up deciding to write for free. So said Maureen O’Connor, a writer for New York magazine’s The Cut blog, among other outlets: “I suspect everyone writes for free, it just depends how you define ‘writes for free.’ If you wrote for a school newspaper, you wrote for free. If you went to journalism school, you wrote for negative dollars. Even richly compensated writers may lean on the fruits of free labor -- their articles are fact-checked by unpaid editorial interns, illustrated with images cropped by unpaid photo interns.” As O’Connor noted, Kreider himself admits to having participated in a “gift economy.” Is that so different from writing for a website one admires or a friend’s magazine for free, with the hope it will pay a dividend?

Perhaps the difference is Kreider’s gift economy was his own, recognizable to someone in his generation, and he’s now at the level of publishing New York Times pieces. Not merely, as Kreider writes, does he no longer desire to be part of a gift economy; it fortuitously would seem he doesn’t, precisely, have to. “People who get nasty on writing for free, it always feels like they're trying to limit the market to just their own paid services, and perpetuating this weird Catch-22 where the only paid writers have only been published when they're paid, which, what?” said Foster Kamer, an editor at Complex. “Also, people have been writing for free forever (letters to the editor, commenters, etc) and still do en masse.”

But at least one twenty-something I spoke to was against writing for free -- at least for herself. Jessica Wakeman, staff writer for The Frisky, told me: “As an adult with an established journalism career, I have had opportunities to write places for free — like The Hairpin, which I understand can't pay everyone — but I haven't taken them even though I may have wanted or originally intended to. Right now, it's more important to me to be able to pay my bills than it is to get some cooler bylines.”

But, as with everything but Kreider’s advice, this comes with a caveat. Not merely does Wakeman acknowledge she’s been buoyed by a social and economic safety net, but she also wrote for free early in her career. “Some of [my] bylines may not have been possible without some of the unpaid "freelance" writing that I did in the past,” Wakeman said. “Feministing and HuffPost are both hugely recognizable names in the media industry, so was worth it to me.”

The practice of not paying writers is not optimal, and it's something young writers do blithely. But the choices have been set up by other people, people in Kreider's generation, not the writers'. Every young writer I spoke to who writes for free describes it as something between a choice and a sacrifice, including Sarah Leonard, an editor at Dissent, who writes some things for free, buoyed by her regular salary. But there's a trade-off. "Not paying writers also tends to narrow the field of writers you have access to: you're more likely to publish people who are more well off or are already your friends," she said. "Not paying writers is often a strike against diversity."

And it's up to editors to fix that, as there will always be some writer who rushes into the vacuum of a writing gig "for exposure." In the end, Kreider’s complaint is directed at the wrong people. If young people never write for free, they may never get the level of editing or the editorial leeway or favors from friends that they need to publish their own Times op-eds someday. So why is he telling them, unschooled, underpaid people in a precarious position, what to do? “I think the onus should be on editors, not on writers,” said Baker, “which is why the intern rights movement is exciting; pressure on editors to pay/treat interns right instead of on interns to write for free.”