"About Time": Travel through time, and mess with women's minds!

Is "About Time" another rain-drenched Anglo rom-com -- or a twisted time-travel web to ensnare Rachel McAdams? 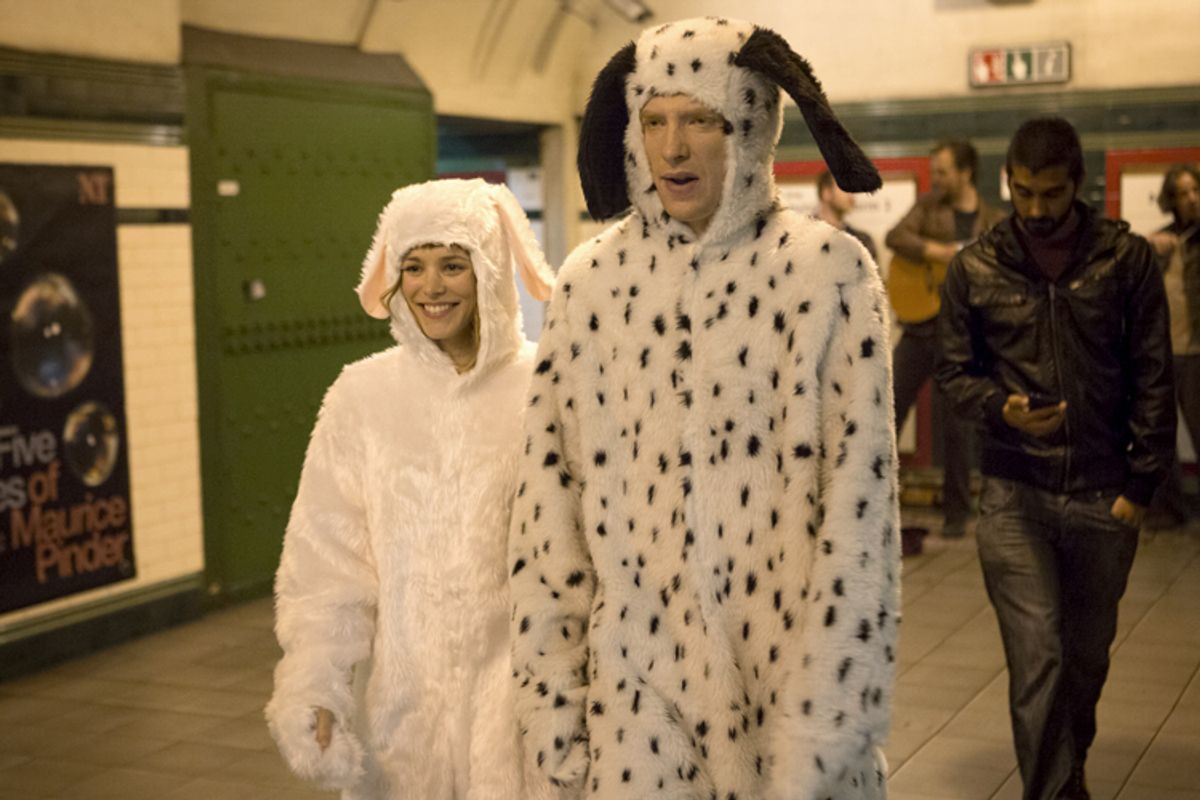 Writer and director Richard Curtis knows what he’s doing when he selects Nick Cave’s song “Into My Arms” to underscore the most emotional scene in his weird, episodic and ambitious new movie “About Time,” the scene that’s meant to leave the audience in tears. This is a film by the reigning evil genius of British romantic comedy, mind you – the guy who made “Love Actually” and wrote both “Notting Hill” and “Four Weddings and a Funeral” – so there are quite a number of those. Anyway it’s not an accident that what the song is about and what the movie is about appear to be at odds. “Into My Arms” is a love song played like a dirge, and when the lyric begins you realize it’s also a hymn, albeit one written by an atheist. “I don’t believe in an interventionist God,” Cave sings over a melancholy solo piano line. “But I know, darling, that you do.” It’s a song about resisting the appeal to the supernatural and the miraculous; even if he believed, Cave insists, he would ask God to change nothing about his life, or his lover, but to leave them as they are.

I understand the way Curtis thinks he’s using the song: To signal an acceptance of mortality and the transience of all worldly passions, blah blah blah. But in fact, “About Time” is a movie that believes in an interventionist God (even if he’s unnamed and invisible), one who has created a bizarre subspecies of long-shanked English demigods who can time-travel within their own lives, repeating any day – or any month, or any year – over and over again as often as they like. When ginger-haired aspiring lawyer Tim (Irish actor Domhnall Gleeson) turns 21, he gets the news from his dad (the reliably wonderful Bill Nighy). All the men in their family have “always” been able to do this, for unspecified reasons. “You can’t kill Hitler or shag Joan of Arc,” as Dad puts it. There appears to be no serious causality paradox or “butterfly effect”; you don’t come back to a fascist dictatorship or a new Ice Age. But you can absolutely re-shag all the girls you’ve already shagged, and there’s nothing stopping you from trying to run up the score by having another go at the ones who turned you down the first time.

It’s a good thing Tim and his dad are so lovable, so awkward, so apologetically English. Am I right? (I guess Interventionist God, being omniscient, had the angles covered.) I mean, imagine if this talent got loose in the male population at large. How many guys would bother living their lives forward – going to the office and eating dinner with the wife’s family – when you could always take another whack at that ninth-grade dance party or that workplace flirtation or that best friend’s inebriated girlfriend? I’m being deliberately mean about a plot device that Curtis wants to come off as a goofy, harmless comic metaphor, but the idea that this implausible inherited trait is actually a cryptic, creepazoid form of domination over women is right there in the movie.

Tim most often uses his newfound superpower to undo douchey faux pas, including a homophobic remark that makes you suspect he’s actually a dick posing as a nerdy sweetheart. Sometimes a good deed for a friend or a patronizing attempt to rescue his sister from a bad-news boyfriend are involved; one of this movie’s not-so-coded messages to its presumptive female demographic is that men who are actually handsome will screw you up. But eventually, after several time-traveling restarts and a lot of painful conversation about how much they both love Kate Moss, Tim gets invited up to the London flat of Mary (Rachel McAdams), the mousy, insecure American girl he has decided is the love of his life. He replays their sex act over and over, gaining in assertiveness and bra-unbuckling expertise with each round, with the clear implication that he has the subjective experience of getting laid three times, while only the last take counts for Mary.

I can applaud, in theory, Curtis’ choice to make the principals in this love story appear somewhat ordinary, by movie standards. Tim and Mary are cute rather than hot, “relatable” rather than immensely cool, and not all that sexually experienced or adventurous. But once he’s let the time-travel cat out of the bag he can’t control it, and Mary comes off as a painfully uncertain, stepped-upon creature, who never understands the degree to which she’s been manipulated. Tim rewinds time to pry her away from a boyfriend called Rupert (too handsome), and borrows his lines about Kate Moss from things she has said during a first date that no longer exists. I guess Curtis is making the point that we all pretend to be things we’re not during the early stages of a relationship, and we’re supposed to be impressed by the lengths to which Tim goes to win Mary back after losing her in the vagaries of time. I just kept thinking about all the different ways he could gaslight her once her incurable, cringing pixie-ness finally drives him around the bend.

With its multigenerational cast, its portrayal of British family life in country (Cornwall) and city (London) and its loose, unhurried pace, “About Time” feels like a personal summing-up, a low-impact, wistful-whimsical Anglo take on the “Wild Strawberries” model. The chemistry between Gleeson and Nighy is entirely charming – awkward but loving father-son relationships are a Curtis specialty – Lindsay Duncan has a small but lively role as Tim’s acrid Mum, and Lydia Wilson steals several scenes as Kit Kat, the slutty, drunken and depressed sister beset with overly handsome men who lack time-travel skills. (One can only wish the movie were about her rather than milquetoast Tim.) It’s a cannily crafted and handsome picture and, in fairness, there were stretches when I was sufficiently captivated to overlook the otherwise powerful urge to suck my brains out through my nostrils with a Hoover rather than keep on watching.

“About Time” will probably please Curtis’ admirers well enough – this is one of those movies aimed at adult female viewers who rarely go to the movies – but it shambles along and doesn’t really have the romantic allure or sex appeal provided by Hugh Grant and Colin Firth in previous Curtis ventures. His time-travel subplot (or super-plot), which is illogical at the outset and devolves into incoherent idiocy before the movie’s over, is meant to deliver a benign if anodyne message: Real happiness lies in appreciating life’s moments as they happen. But another way of reading “About Time” is that it raises the inherent implausibility of the rom-com narrative to a new level. As one cynical female friend of mine puts it, no one ever went broke telling women that men will love them forever and remain monogamous, despite considerable evidence to the contrary. “About Time” insists that if you find a really good man – not too handsome! – this will still hold true even when he has unlimited opportunities to screw other chicks without anyone finding out.

“About Time” opens in limited release this week in New York, Los Angeles and other major cities, with national release to begin Nov. 8.