The singer heads to rehab -- but real change still eludes him, no matter how many times he says he's learned 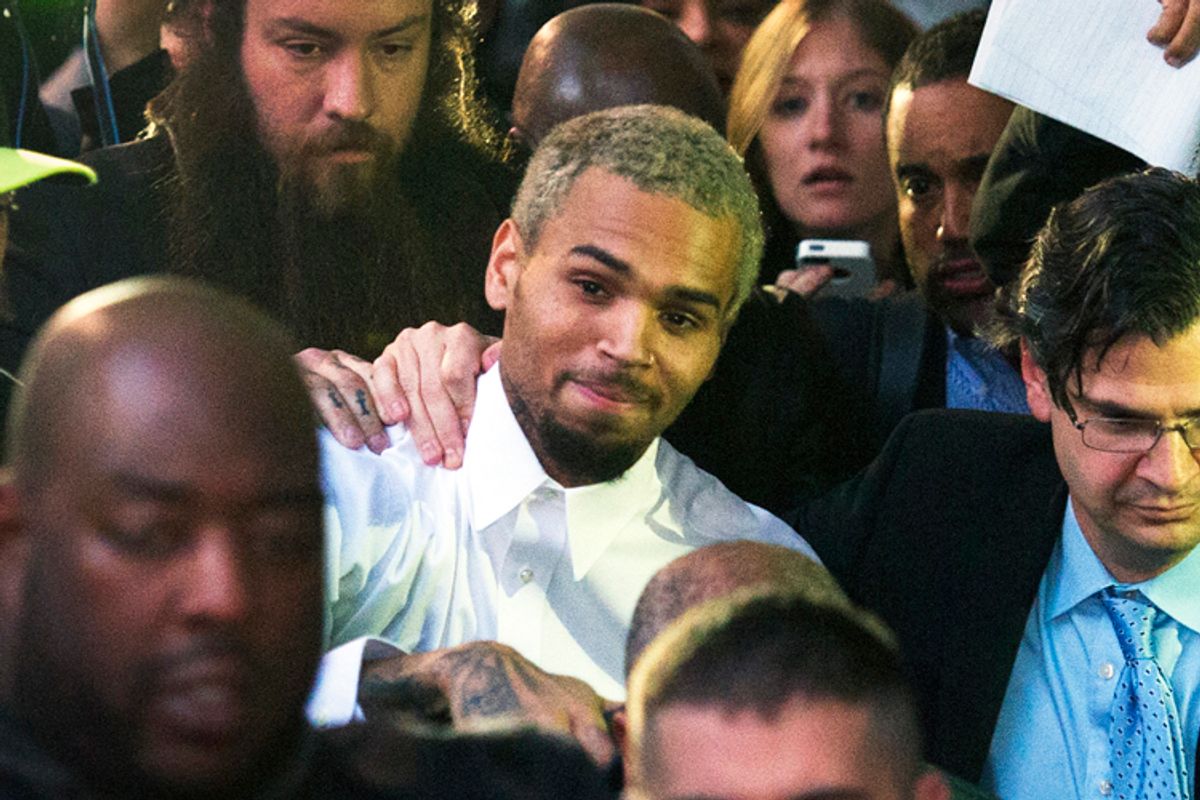 "I don’t try to lash out at people, or be as mad or impulsive as I used to be." That's what Chris Brown told Jet magazine just two weeks ago.  But on Sunday, the singer and convicted abuser was arrested, along with his bodyguard, for assault after a Washington, D.C., incident with a 20-year-old Maryland man. The police report states that Brown declared, "I'm not down with that gay s--t" and "I feel like boxing," before punching the man, who'd allegedly attempted to squeeze into a photo Brown was posing for with some female fans, in the face.

Brown is still on probation for his 2009 beating of his then girlfriend Rihanna, and faces up to four years in prison if he's found in probation violation. So of course, he's now headed instead to rehab. In a statement from a representative Tuesday, Brown's handlers said he "has elected to enter a rehab facility. His goal is to gain focus and insight into his past and recent behavior, enabling him to continue the pursuit of his life and his career from a healthier vantage point." Gosh, where have we heard this before?

In a Larry King interview four years ago, Brown humbly declared that seeing his girlfriend's battered face "really like took a toll on me," and that he was hence going to do things "differently and better."  Three years ago, Brown proudly posted his certificate of completion of a 52-week domestic violence course, boasting, "Boyz run from [their] mistakes. Men learn from them!!!" And just this month he said the Rihanna "incident," as he still calls it, was "probably the biggest wake-up call for me. I had to stop acting like a little teenager, a crazy, wild young guy."

Yet here's what he's done since the "incident." In 2010, shortly after bragging of moving forward differently and better and saying he wanted to be a "role model," he went on Twitter to attack Raz-B -- who's been open about being molested as a child – and call him a "dick in da booty ass lil boy." In 2011, he went on a shirt-ripping, chair-throwing rampage at "Good Morning America." Last year, he got in a nightclub fight with Drake and disgustingly threatened a female critic on Twitter. Earlier this year, he got in a fight with Frank Ocean. If Brown has accomplished anything in the past four years, it's been proving that a certificate of completing domestic violence training is approximately as useful as a liberal arts degree.

Brown did not grow up in an environment that would ever be considered conducive to healthy behavior. He says his mother was abused by his stepfather for years, and that it was "an influence in me about how to treat a woman."  He recently shockingly claimed that he lost his virginity at age 8, to a teenage girl several years older, an incident several critics have pointed out constitutes sexual abuse.  But Brown is not only a fully grown man who is responsible for his own behavior, he's one who has repeatedly insisted that he's learned and grown and then promptly gone on the attack again. His profound sense of his own victimhood -- earlier this year he literally compared himself to Jesus on the cross --  is staggering. And what's particularly loathsome is that his fans and entourage encourage it. On Tuesday, his lawyer Mark Geragos said, "We talked today and he said, 'I want to take some time and do a little introspection and understand everything that's going on around me. It was his decision, and he should be applauded." Geragos, by the way, has also represented convicted wife murderer Scott Peterson, so take his advice on whom to applaud with a grain of salt.

Brown has now spent nearly five years acting out, fighting and pitching tantrums in public. Faced with the possibility of jail time, he's conveniently heading to rehab. Does anybody in their right mind really think anything about this merits praise? More important, does anybody really believe that this time, like all the others, it'll make any difference whatsoever?