In defense of funeral selfies

The phenomenon might seem proof of technology distancing us from our own humanity, but it's quite the opposite 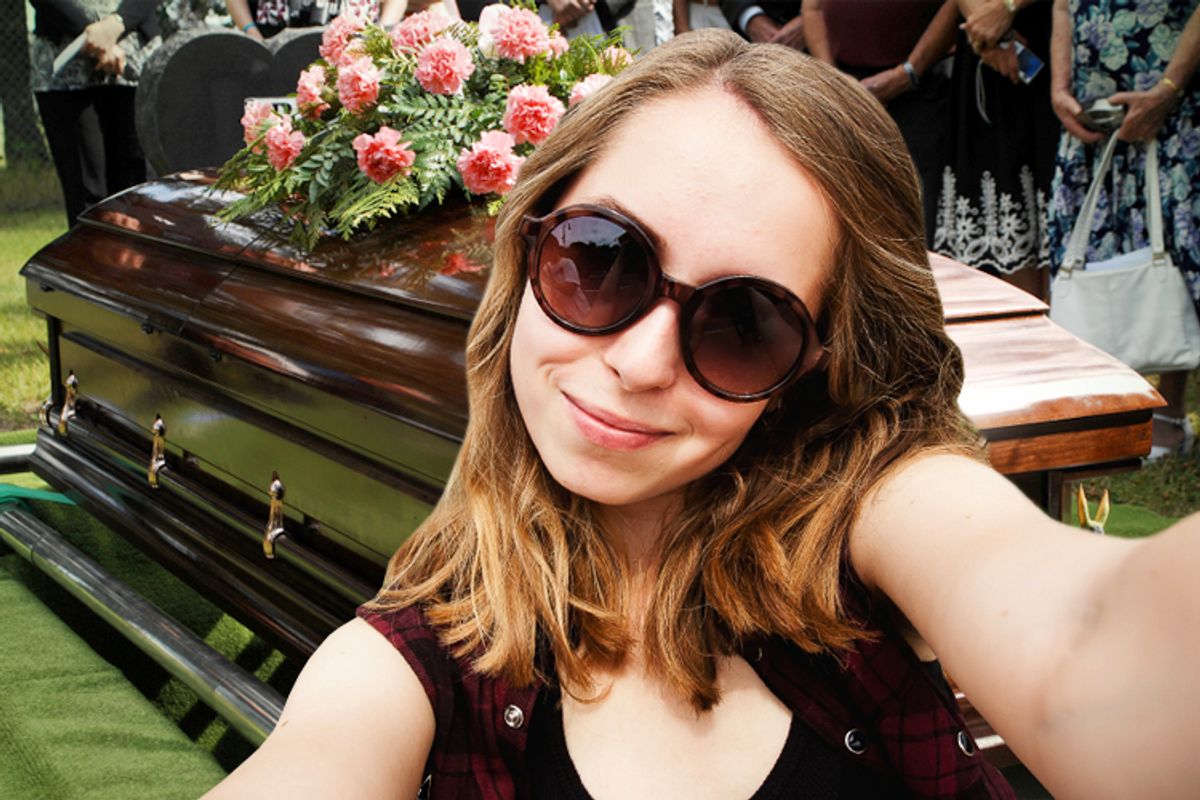 A new blog, Selfies at Funerals, documents the supposedly disturbing phenomenon of young people doing just that: turning their cellphone cameras on themselves during one of life's most solemn moments. Business Insider has already rushed to turn this into teenagers-these-days link bait -- so before this turns into the next panic over the state of today's youth and how technology is distancing us from our own humanity, I have to ask: Doesn't this seem like an entirely understandable reaction to death?

When faced with our own mortality, we humans are notorious for desperately, and clumsily, seeking reassurance of our own vitality. It's what's behind so many funeral clichés, like drinking too much or falling into bed with a fellow griever. These are attempts at chasing the feeling of being fully alive. These days, selfies are how we make ourselves real, to ourselves and to the outside world. So, it's no wonder that some of us turn to our iPhones in these moments of loss. It's a way of saying, "I still exist."

Just take a look at this mirror selfie of a girl pushing out her lips, along with the caption, "Cried off all my makeup so ew. But funeral." Another shows a young woman dressed all in black above the caption, "Funeral dress from today. Goodbye great uncle John, May you rest in peace. We will never forget you." Then there's this image of a young woman making a sad-pout version of duck-face. Her caption: "You never appreciate what you have till its gone. R.I.P. Grandpa, you will be missed." They may not be the most honest or vulnerable portraits of despair, but they are attempts at connection. We all want our sadness to matter, just as we want our lives to count for something.

If we're lucky, grief is a rare and unusual event. When my mom was diagnosed with terminal cancer I took scores of photos of myself crying. I didn't post these on Instagram, and I will likely never show them to another soul, but these moments of extreme sorrow felt like something worth documenting. Part of me knew that my grief would not feel so real even a year down the line, and I wanted to preserve it, to honor it. I knew I would forget the depth of that hurt, in the same way that we forget some of the pain of childbirth -- it's part of what allows us to continue living, or having children.

So much about death, and the grief that it inspires, is abstract. Someone is there and then they are gone -- where did they go? Are they really gone or have they just gone on a really long vacation? When my mom died, I remember darkly wishing that I could have one of her bones. Not something as ethereal as her ashes; I wanted a tangible, whole piece of her to hold onto. Photos have a way of making things concrete -- whether it's of our grandma in a casket or our dazed, post-funeral face. Who is anyone to judge what helps another person make sense of the biggest question that we live, and die, with?

Of course, some of these are more defensible than others -- but even the worst of Selfies at Funerals fail to inspire my outrage. The young guy posing next to a statue of a breast-feeding woman, throwing up a peace sign along with the caption, "Killin the selfie game at pop's funeral"? Perhaps -- OK, definitely -- he has a lot of growing up to do, but there is nothing unusual about turning to comedy in life's bleakest moments. Some of us are simply better at laughing than crying. The teens en route to a funeral giddily posing with tongues hanging out, as though they're on their way to a rock concert? I can hardly blame them for wanting to deny the reality of it all. That's not to mention the many young people who are dragged along to funerals of people they barely know -- and before they're even ready to fully grasp the concept of death.

All of this is to say: The next time you see someone taking a selfie at a funeral, consider that rather than evidence of our inhumanity, it might actually be proof of the opposite.