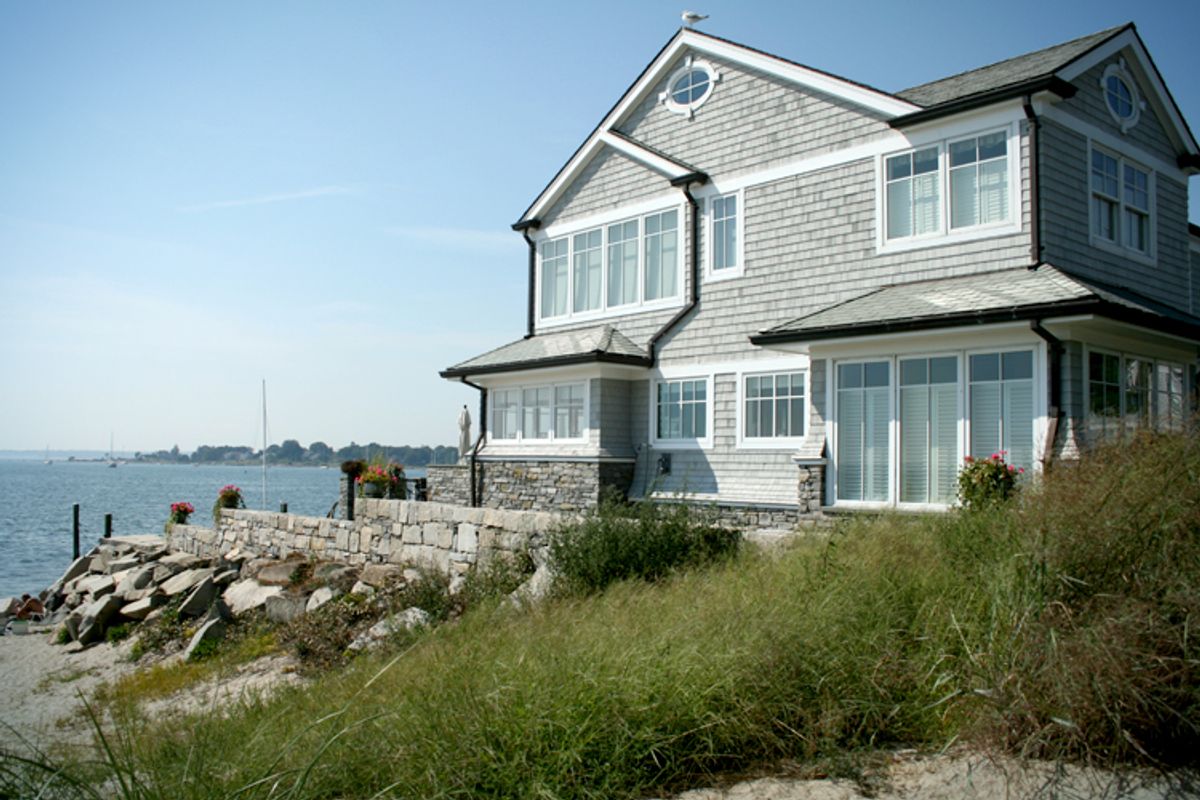 Last May, when conservatives still pretended to love cutting the deficit and liberals still pretended to want to combat climate change, a broad bipartisan coalition passed a sweeping flood insurance reform bill – by a 402-18 count in the House – designed to align the costs of insuring homes in flood zones with the realities of increased storm frequency.

But yesterday, Rep. Maxine Waters – the lead author of the law – stood with several of her colleagues and proudly introduced a bill that would stall the implementation by up to four years, delaying any increase in flood insurance premiums until 2017. It’s difficult to argue that homeowners in flood zones alone should have to bear the burden of massive rate increases. But shrinking from the real costs from climate change and delaying them, rather than facing up to how it will affect every aspect of our economy, is a testament to a political class that is simply not equipped to deal with the consequences of a warming planet.

The National Flood Insurance Program, designed in 1968 to provide mandatory federal insurance to Americans living in coastal areas, has been hemorrhaging money after years of extreme weather. The NFIP, a division of the Federal Emergency Management Agency, is meant to be self-supporting through premiums, relieving the pressure on disaster relief funding. But the NFIP borrowed $19 billion from the Treasury in 2005, after damages from Hurricanes Katrina, Rita and Wilma. According to experts, its deficit after payouts from Superstorm Sandy approaches $28 billion.

The Biggert-Waters reform legislation, named for former Republican Rep. Judy Biggert and current Democrat Waters, was uncontroversial when it was introduced in 2012. It passed the House easily, and was eventually incorporated into a larger transportation bill that sailed through Congress. Biggert-Waters forced the creation of new FEMA maps to determine who needed flood insurance. It also allowed higher annual premium increases – to 20 percent from 10 percent – so premiums could gradually come more in line with actuarial realities. And for high-risk homes built before flood maps were adopted, which enjoyed generous subsidies, flood insurance rates would increase 25 percent a year, until they reached a level commensurate with the actual risk. If the homes changed hands, they would immediately move to the risk-adjusted rates. Over time, subsidies for 1.1 million policyholders, 20 percent of the program, would be phased out.

The law represented an alliance between fiscal conservatives interested in bringing the NFIP back into balance, and some environmental groups, who believed that subsidizing homeowners with low flood insurance rates failed the test of making the costs of climate change real, and would delay the spur to action on reducing greenhouse gas emissions. “Repetitive loss” homeowners, many paying significantly discounted rates dating back to the 1970s, represent one-third of all NFIP claims, according to the R Street Institute, and continual subsidies for them result in “nothing but environmental catastrophe and financial ruin,” according to R Street fellow R.J. Lehmann.

But if Congress was on board with reforming the NFIP in 2012, it wasn't ready for complaints from homeowners in flood zones in 2013. People across the country lost their subsidies, and saw their rates grow by 500 percent or more. One homeowner newly zoned into a flood area reported a $68,000 flood insurance bill. Real estate agents said the hikes were affecting home sales, because subsidized policyholders could not sell their properties to new purchasers who discovered huge rate increases. Many of the properties affected were vacation homes and secondary residences. But poorer areas in Louisiana and places like Rockaway Beach in New York consist of modest, middle-class homes, and the residents could not afford the hefty increases. Protests broke out in these areas, and members of Congress, who casually passed Biggert-Waters as a fiscal and environmental imperative, took the message.

Almost immediately, conservatives in flood-prone states like Mississippi and Louisiana, who routinely vote to balance the budget and slash federal programs, called for additional insurance subsidies from the government. But they weren’t alone. The increased threat from climate change of flooding all over the country ensured a regionally diverse coalition interested in shielding their constituents from higher costs. For example, the environmentally conscious Massachusetts congressional delegation, including Sens. Elizabeth Warren and Ed Markey, urged a delay to the rate increases, because homeowners around the state found themselves placed in a flood zone for the first time. Even Maxine Waters, who authored the bill, disavowed its consequences, saying that she never intended for it to generate “outrageous premiums.” (Multiple attempts to speak with Rep. Waters for this story proved unsuccessful.) FEMA director Craig Fugate was asked to postpone the rate hikes unilaterally, but he told Congress he didn’t have the authority to do so.

A Congress that can’t seem to agree on anything united on stopping flood insurance rate increases, with a bipartisan group working for weeks on reaching a resolution, even while the government was shut down. Finally, last Friday, Waters announced a deal that would delay the changes to the program by four years. It would force FEMA to conduct an “affordability study” to ensure that homeowners wouldn’t pay undue costs, and would allow reimbursement to policyholders who successfully appeal a change to flood maps that increase their rates. “This delay would allow FEMA to get their act together,” Waters said in a statement.

While some environmental groups understand the impulse of protecting people from giant rate increases, continuing to subsidize climate change-ravaged flood zones will only ensure escalating costs from carbon pollution. “People in government have not gotten their minds around the fact that climate change is an enormous driver of increased costs,” said Daniel Kessler, U.S. communications director of 350.org. Ironically, green groups are joined by anti-tax organizations arguing against the wasteful subsidies. Insurance trade groups also want to see the flood insurance program reflect real risks. But Congress appears to be inexorably moving toward delay.

Unsuspecting homeowners are obviously dismayed to find out about additional costs of living. But they simply reflect the reality of the warming world we inhabit. There are different ways to mitigate those costs – 350.org believes the fossil fuel industry should pay for it through a price on carbon, with Daniel Kessler noting, “They’re the only industry that doesn’t pay the cost of its own pollution.” But kicking the can down the road for four years serves almost nobody. It means that high-risk flood zones, many of them populated by wealthy vacation homes and investment properties, will continue to enjoy federal subsidies. It means the government will absorb those costs, when the money could go to climate change mitigation strategies. It means that Congress will not have to reckon with how to best avoid the climate change-fueled economic catastrophe headed toward us like a freight train. “This is an unfortunate example of Congress bowing to pressure from a vocal minority of special interests worried about the effect it would have on their pocketbooks and profits, instead of looking at the longer-term economic impacts on the United States as a whole,” said RL Miller, chair of the California Democratic Party’s Environmental Caucus. “It’s a microcosm of climate change politics.”

Flood insurance rates that reflect the actual risks of flood damage will have to rise quite a bit. At some point, America will have to manage these costs. They cannot just constantly rebuild every flood-prone area, especially if it becomes increasingly unlivable. Maybe they will buy out the residents and relocate them. Maybe they will attack the problem at its source and drastically reduce fossil fuel emissions. But Daniel Kessler of 350.org made one thing clear: “The costs to act are less expensive than the costs of inaction.” Sadly, Congress is preparing to make the politically expedient choice of doing nothing.