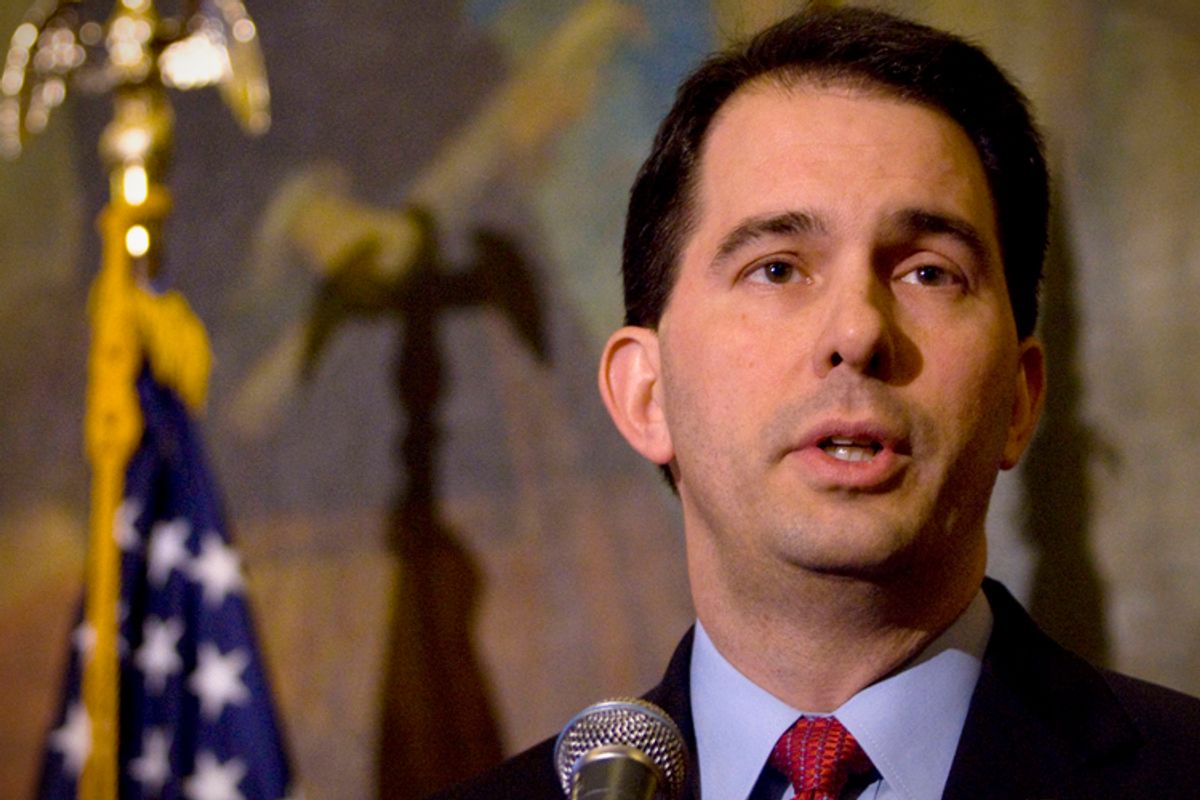 Months after the Tea Party’s 2010 election triumph, Wisconsin’s Scott Walker made international news when activists occupied the Capitol in opposition to his anti-union gambit. But a report being released Thursday suggests Americans dramatically underestimate the scope and ambition of Republicans’ post-2010 push to ratchet workplace laws to the right – involving over a dozen states, a tangled web of under-the-radar coordination, and a broad constellation of weakened protections, from unemployment benefits to child labor laws.

“People in any given place, if they’re dealing with a minimum wage repeal in New Hampshire or something, mostly experience that as if it comes from a particular legislator in their state, and it’s explained as a response to the conditions in their state,” report author Gordon Lafer told Salon. “So when you put all the pieces together over the 50 states, one of the things you see is how concerted an effort it is, and how cookie-cutter the legislation is – and how much it’s not being driven by individual legislators, but by a national corporate lobby.” Lafer, a University of Oregon political economist who’s served as a policy adviser in the U.S. House, wrote the paper for the Economic Policy Institute, a D.C.-based progressive think tank whose funders have included foundations and unions.

According to Lafer’s report, "The Legislative Attack on American Wages and Labor Standards, 2011-2012," within those two years 15 states passed new restrictions on union collective bargaining or paycheck deductions; 16 passed new restrictions on unemployment benefits; four passed new restrictions on state minimum wage laws; and four reduced limitations on child labor. The child labor changes range from a Wisconsin law ending limits on 16- and 17-year-olds’ work hours to an Idaho law letting 12-year-olds be hired for manual labor at their school for 10 hours a week. Lafer notes that a Idaho school district spokesperson said that would both cut down on labor costs and teach kids “you have to be on time” and “do what you’re asked …”

Lafer highlights a slew of other laws passed in the two years following the 2010 right-wing electoral romp. Among them: Michigan banned safety regulations covering repetitive motion. Florida banned local paid sick leave mandates. Wisconsin banned compensatory and punitive damage suits over employment discrimination. New Hampshire made it easier for companies to classify workers as “independent contractors” lacking the legal rights of employees. Maine allowed employers to apply for employees to be considered disabled, and to determine what fraction of the minimum wage to pay employees classified as such.

The report also tallies a number of business-backed bills that were pushed in the same period but fell short of becoming law, including 17 “right to work” bills (along with the ones that passed in Michigan and Indiana); a Montana bill excluding tips from workers’ compensation calculations; an Oklahoma bill requiring those receiving unemployment to do 20 hours of weekly unpaid community service; and a Florida bill prohibiting municipalities from passing any rules to address “wage theft” – companies’ failure to pay employees’ their legally owed wages.

Lafer’s report emphasizes the role of a number of national right-wing groups in pushing such legislation, especially the American Legislative Exchange Council. “Ultimately,” writes Lafer, “the key ‘exchange’ that ALEC facilitates is between corporate donors and state legislators. The corporations pay ALEC’s expenses, contribute to legislators’ campaigns, and fund the state-level think tanks that promote legislation; in return, legislators carry the corporate agenda into their statehouses.” ALEC’s website states that its “Commerce, Insurance and Economic Development Task Force’s model policies on labor preserve freedom of association for employees while protecting worker choice and taxpayer dollars.”

Lafer challenges a number of rationales offered for the raft of policies, noting that Republicans went after public workers in states with comparatively small deficits, and passed right-wing education reforms in states with comparatively high test scores. He points out that ALEC warns against raising the minimum wage on the grounds that it “lures high school students into the full-time work force” and thus out of school, but the National Restaurant Association argued for ALEC-backed bills weakening child labor restrictions on the grounds that “employment teaches teenagers skills …”

“Running through what on the surface are contradictions is an agenda at every turn lowering wages and lowering the bargaining power of working people,” Lafer told Salon. He contended that agenda was designed not just to cut labor costs, but to reduce workers’ leverage, from growing the ranks of teenagers available to compete with adults for jobs, to strengthening managers’ authority to deny unemployment benefits, to denying or diluting the right to form a union. While Gov. Walker has decried “a society where the public employees are the haves and taxpayers who foot the bills are the have-nots,” Lafer argued that the right-wing workplace policies of the past few years “primarily affect exactly those people who are supposedly the beneficiaries of cutting wages and benefits in the public sector.”

“Basically,” Lafer told Salon, “the most powerful lobbies in the country are in a concerted attack across the country, and also across a wide range of issues, acting in such a way that is going to make it harder for people in the country to make a decent living.”