Pick of the week: A Texas cowboy faces AIDS

Pick of the week: Matthew McConaughey and Jared Leto are vibrant in the amazing true story of "Dallas Buyers Club" 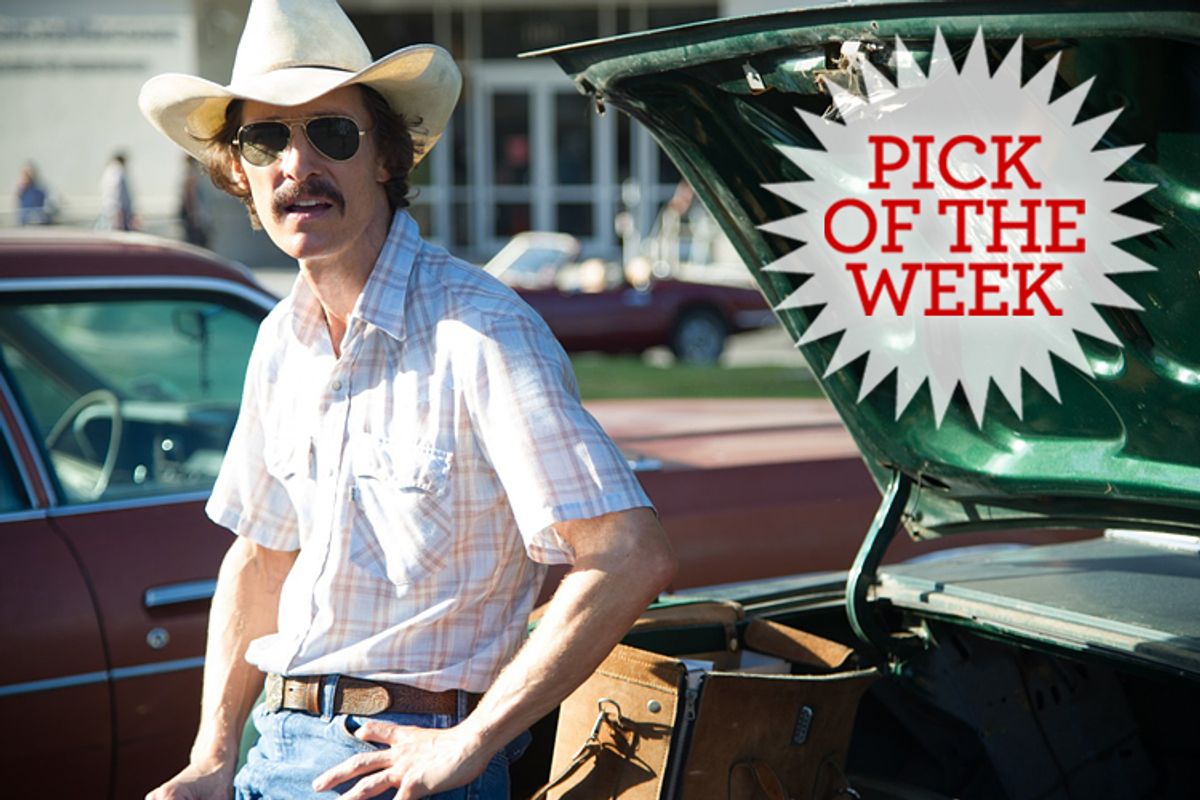 There’s a peculiar energy, a life force, to Jean-Marc Vallée’s “Dallas Buyers Club” that elevates the film well above its familiar fable about a reprobate redeemed and a band of outsiders struggling against the entrenched establishment. Some of that is the blown-out widescreen images of cinematographer Yves Bélanger (a French-Canadian, like the director), which capture the lived-in flavor of downscale North Texas in the mid-1980s. (Most of the film was actually shot in Louisiana.) And a whole lot of it is Matthew McConaughey, the Renaissance man of independent film, giving another electrical performance as a man on the outer margins of society.

This time around McConaughey plays a character who might seem like an overly convenient fiction if he weren’t based on a real person. At least in the United States, very few heterosexual males contracted HIV during the peak years of the epidemic (this was and is a lot less true in the developing world), but Dallas electrician and good ol’ boy Ron Woodroof was one of them. When we meet Ron in the first scene of “Dallas Buyers Club,” he’s backstage at the rodeo arena with some cocaine and a couple of girls. (You don't get the feeling this was a one-time event.) He’s also bone-skinny and suffering from a wracking cough. Ron doesn’t know it yet, but not merely is he HIV-positive, he’s got “full-blown AIDS,” with a T-cell count near zero and an extremely dire prognosis. When Ron lands in the hospital, the city’s leading AIDS doctor (Denis O’Hare) tells him he probably has a month to live. (Jennifer Garner plays a more sympathetic doctor who feels like a throw-in for the medical profession and the hetero norms of movieness.)

Of course I don’t have any idea when or how Ron Woodroof contracted the virus – in the movie he remembers having sex with a woman with IV track marks – but he very quickly finds out what it’s like to be the object of bigotry. I’m not sure we even needed the early scene when Ron offers his unenlightened commentary about the recent revelation that Rock Hudson was a “cocksucker” (which locates us in October of 1985), or his response to a friend who’s thinking of taking an oil-field job in Saudi Arabia: “Why you want to go work for them sand niggers?” Ron is a casual racist, a casual homophobe, a hard-partying man’s man who’s never really thought about his prejudices or why he holds them. He isn’t exactly a likable guy, but he has a long, lean Lone Star intensity that makes him attractive.

Rayon (Jared Leto), a transgender woman Ron meets in the hospital, offers her opinion: Ron is handsome, all right, in a “Texas redneck white-trash kind of way.” Ron heaps abuse on her at first, of course – Rayon is consistently called “him” in the movie, which would be accurate to the time and place – but even if Ron doesn’t know it yet the virus is reshaping his social world, his view of reality and his relationship to power. Ron’s outrage when doctors first tell him he has a “faggot disease” is matched by the fury he feels when his longtime buddies in the honky-tonk with the Rebel flag on the wall make exactly the same assumption. Of course one could argue that Ron never gave up all the privileges of being a straight white guy in America, since he still was one. But in its own way “Dallas Buyers Club” makes the radical case that those things are social constructs, subject to revocation at any time.

We’re long past the point where we should be handing out gold stars to mainstream actors for playing LGBT characters, but Leto’s performance as pure-dee Texas-trans Rayon is much more than a matter of feminine attire and affect. To be openly transgender in Dallas in 1985 – for that matter, almost anywhere in America that wasn’t San Francisco or lower Manhattan – required facing some degree of public hatred, and near-universal incomprehension, on a daily basis. Leto gives us a fully realized character who has confronted that without having her spirit crushed, but who along the way has internalized considerable damage. Rayon has a scene in a grocery store – really it’s just a single shot, with no lines – when she realizes that embittered, homophobic Ron has become her advocate, her defender and, most important, her friend, that utterly destroyed me.

Along with many other HIV-positive patients in many other places, Ron and Rayon came to understand that the widely publicized pharmaceutical rollout of AZT in the mid-‘80s was a long way short of a viable treatment for AIDS, let alone a cure. (In fairness, AZT did help some people and still does, a point the movie barely mentions.) What begins as Ron’s solo effort to smuggle unauthorized AIDS drugs he got from a clinic in Mexico evolves into the Dallas Buyers Club – a gray-market clearinghouse for HIV-related drugs and information -- one of the biggest and most ambitious such enterprises in the country.

It’s probably asking too much to expect a narrative film to get all the medical, scientific and legal issues around AIDS treatment right, especially since many of those questions remain contentious. What the movie does get right is the way that patients like Woodroof empowered themselves and others, end-running the bureaucracy and importing and distributing all kinds of stuff, some of which worked and some of which didn’t: pharmaceuticals from Mexico, Canada and Europe that hadn’t been approved by the FDA; vitamin, mineral and protein cocktails of uncertain or unproven value; naturopathic and herbal remedies that may have been snake oil.

Whatever the buyers’ club movement may have done wrong, it was part of a multipronged assault on the pharmaceutical, medical and governmental mafia that controlled the production, testing and distribution of all new drugs. As seen in David France’s crucial documentary “How to Survive a Plague,” this many-leveled AIDS activism didn’t just accelerate the discovery of drugs that actually saved lives, it also changed the American public’s relationship to medicine in ways we’re still dealing with. However you want to describe the enterprise run by the redneck cowboy and the wispy trans-girl (first out of a motel room and then out of a donated house), it defied all political categories. It was libertarian or maybe anarchistic; it certainly had nothing to do with liberalism or the “left,” which collectively made a sad face and hoped that somehow something good would happen to help all those poor people suffering from that awful disease.

At least in the movie version of his life, Ron Woodroof has more than a little in common with Rick, the Humphrey Bogart bar owner in “Casablanca.” What begins for him as a business venture, a question of self-preservation, ends by becoming a matter of principle and a question of the heart. Well, I love “Casablanca,” and although I don’t know how accurate a portrait this is of Woodroof (who is certainly a folk hero among AIDS activists), the story about the bad man whose heart is revealed to be good remains as irresistible as ever. McConaughey is vividly, even agonizingly alive every single second he’s on-screen, as a dying man whose business isn’t finished, and never will be. He surely deserves the Oscar buzz he will get for this role, and the timing is right. But forget all that for now. Despite its clichéd elements, “Dallas Buyers Club” is a fierce celebration of the unpredictable power that belongs to the outcast, the despised, the pariah. That’s not a story of the ‘80s, it’s a story of always.