"War of the Worlds," Fox News-style: "Run for your lives! Obamacare is coming!"

Seventy-five years ago, "War of the Worlds" freaked out America. But what if Orson Welles had worked for Fox News? 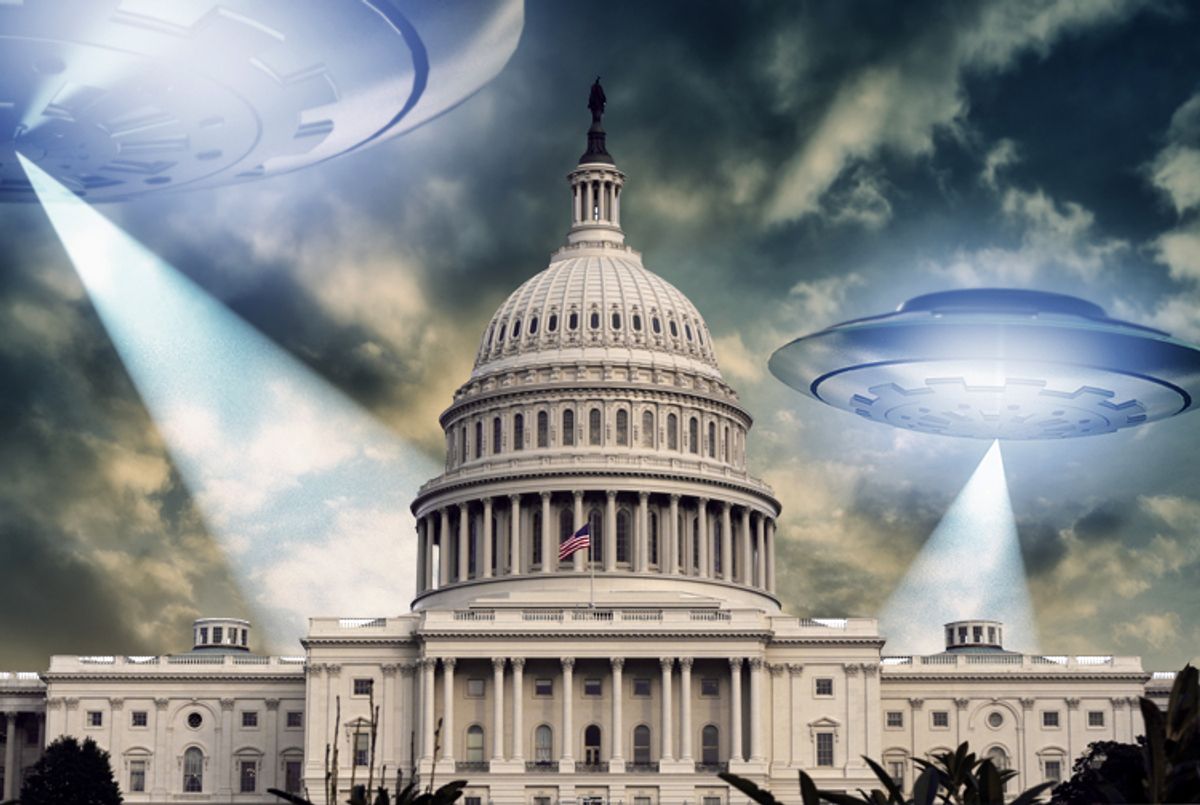 Below are portions of the article that appeared in the New York Times the next day.

However, I’ve replaced “Martians” with terms like “Obamacare” and “Healthcare Reform,” and replaced “Columbia Broadcasting” with “Fox News.” The rest is verbatim from the Oct. 31, 1938, article.

Many Flee Homes to Escape Obamacare

A wave of mass hysteria seized thousands of Fox News listeners between 8:15 and 9:30 last night when they were led to believe that Obamacare’s arrival was already spreading wide death and destruction across America.

The broadcast disrupted households, interrupted religious services, created traffic jams and clogged communications systems. Scores of adults required medical treatment for shock and hysteria.  One police headquarters received more than 200 calls from Fox listeners wanting to know what to do to escape Obamacare.

In Newark, more than twenty families who’d heard the Fox News broadcast rushed out of their houses with wet handkerchiefs and towels over their faces, to flee from what they believed was to be an invasion of federal bureaucrats upon the the healthcare system.  Some began moving household furniture.  In some cases it was necessary to give sedatives.

The switchboard of The New York Times was overwhelmed by the calls regarding the Fox News broadcast. A total of 875 were received. One man who called from Dayton, Ohio, asked, "What time will Obamacare cause the end of the world?" A caller from the suburbs said he had had a houseful of guests, and all had rushed out to the yard for safety from the Affordable Care Act.

One family, believing that Healthcare Reform had started, reported it to the police. An ambulance, three radio cars and a police emergency squad of eight men were sent to the scene with full inhalator apparatus.  They found the families contorted with hysteria. The police calmed them.

The Fox broadcast was designed to simulate a regular program. The radio listeners, apparently, missed or were otherwise unaware of the broadcast’s fictional nature.

Pointing out that the fictional character of the broadcast had been previously publicized, a spokesman for Fox News stated:

"Nevertheless, the program apparently was produced with such vividness that some listeners who may have heard only fragments thought the broadcast was fact, not fiction.”

Throughout the nation, Fox News listeners fled their homes.  Large numbers of Fox viewers, obviously in a state of terror, called police and newspapers in the United States and Canada to ask questions such as whether they would be safer from Obamacare in their cellar or on their roof, and how they could safeguard themselves against the health insurance exchange.

Women and children who listened to the broadcast were crying, and it took some time for the police to convince them that the Obamacare catastrophe was fictitious.

In Queens, N.Y., the principal question asked of the switchboard operators at Police Headquarters was whether "the wave of poison gas from Obamacare will reach as far as Queens."  One man called the Mount Vernon Police Headquarters to find out "where the death panels were located, so he could avoid them."

So many calls came to newspapers, and so many newspapers found it advisable to check on the reports despite their fantastic content, that The Associated Press sent out the following at 8:48 P. M.:

"Note to Editors: Queries from Fox News listeners throughout the United States tonight, regarding a reported societal collapse as a result of Obamacare, are the result of a studio dramatization.

In Orange, N. J., an unidentified man rushed into the lobby of the Lido Theatre, a neighborhood motion picture house, with the intention of warning the audience that that Obamacare had invaded and was spreading poisonous gases. Skeptical, Al Hochberg, the manager of the theatre, prevented the man from entering the auditorium of the theatre and then called the police. He was informed that a Fox News broadcast was responsible for the man's alarm.

One excited parishioner burst into his church during evening services and shouted that Obamacare had arrived, showering death and destruction, and that our nation was threatened by the health insuracne website. The pastor quieted the congregation and all prayed for deliverance from the "catastrophe." Evening services became "end of the world" prayer meetings in some.

City officials made emergency arrangements for the population, answering questions from Fox News callers such as "Will I be safer from Obamacare if I close my windows?" and "Have the police any extra gas masks that could protect me from the Federal Takeover of Healthcare?" Many of the callers to police headquarters, on being assured that the Fox News broadcast was fiction, were uncertain in whom to believe.

Scare is nationwide
Broadcast spreads fear in New England, the south and west

On the West Coast, the general impression of listeners seemed to be that Obamacare was in the process of destroying New York and threatening to move westward. "My God," roared one inquirer into a telephone, "where can I volunteer my services? We've got to stop this awful thing."

Newspaper offices and radio stations in Chicago were swamped with calls. Some said they had relatives who had been near the area of the initial Obamacare Implementation, and asked if a casualty list from the Death Panels was available.  One telephone caller to the police said that he had loaded all his children into his car, had filled it with gasoline, and was going somewhere.

"Where is it safe from Obamacare?" he wanted to know.

Atlanta reported that listeners throughout the Southeast "had it that Obamacare had struck in New Jersey, with monsters and almost everything, and anywhere from 40 to 7,000 people reported killed."

In Indianapolis a woman ran into a church screaming: "New York has been destroyed by Obamacare; it's the end of the world. You might as well go home to die. I just heard it on Fox News."  Services were dismissed immediately.  In Birmingham, Ala., people who’d heard the Fox broadcast gathered in groups and prayed for protection from Healthcare Reform, and Memphis had its full quota of weeping women calling in to learn the facts.

Five students at Brevard College, N. C., fainted and panic gripped the campus for a half hour with many students fighting for telephones to ask their parents to come and save them from Obamacare’s Individual Purchase Mandate.

A man in Pittsburgh said he returned home in the midst of the Fox News broadcast and found his wife in the bathroom, a bottle of poison in her hand, and screaming: "I'd rather die this way than like that," referring to the Affordable Care Act. He calmed her, listened to the Fox News broadcast, and then rushed to a telephone to get an explanation.