Atheist marriages may last longer than Christian ones 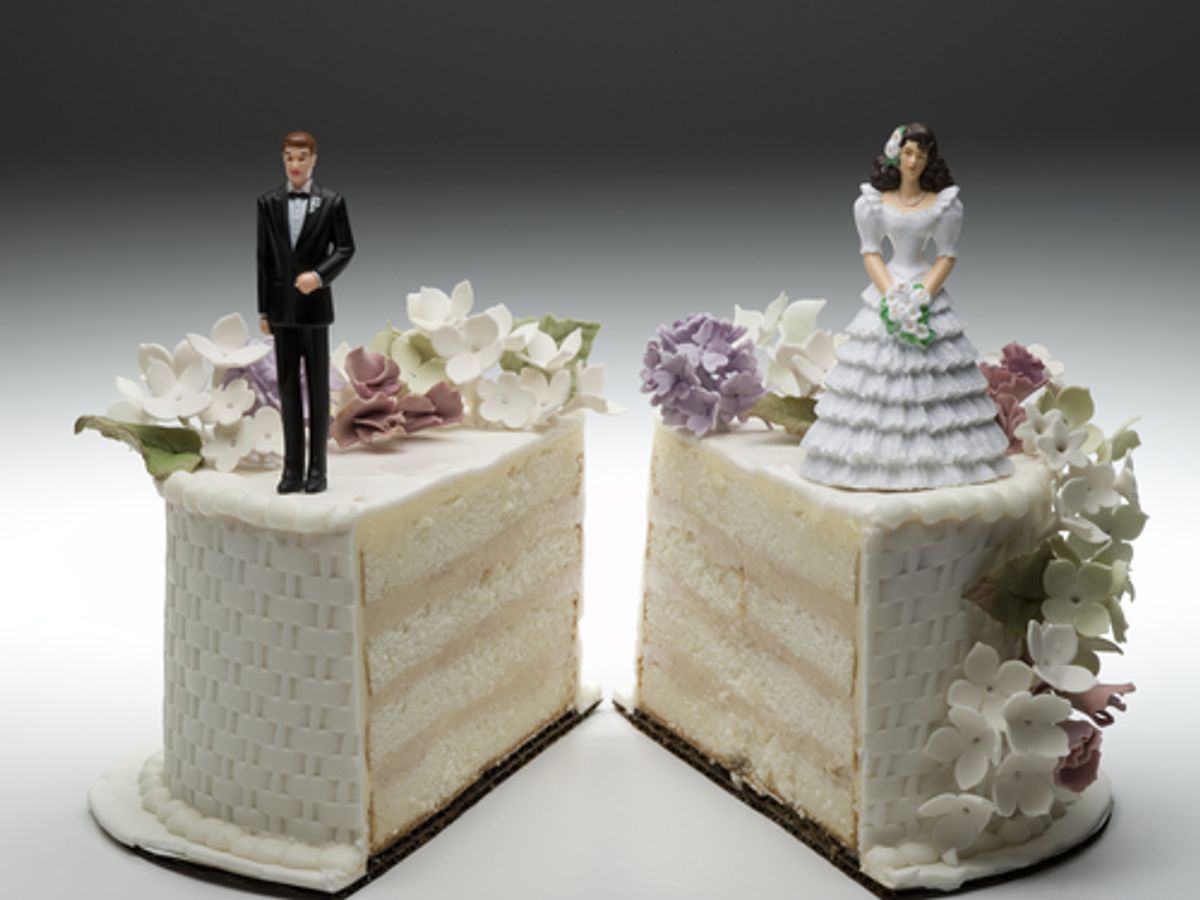 Conservative Christians think of themselves as the last line of defense for a time-honored and holy tradition, marriage. In the conservative Christian view, marriage is a sacred union ordained by God. It binds one man and woman together so that the “two become one flesh” until they are parted by death.

This view of marriage is unbiblical, to be sure. See Captive Virgins, Polygamy, Sex Slaves: What Marriage Would Look Like If We Actually Followed The Bible. But hey, who actually reads the Bible? Surely, what God meant to say is that marriage should take the form that is most familiar and traditional to us: One male plus one female who is given to the male by her father--that part is biblical--for life.

In this worldview, Christian marriage is under assault by an anti-trinity of powerful and dark forces: feminism, homosexuality and godlessness. Faith, on the other hand, saves both souls and marriages. When I was young, a slogan made its way around my church: The family that prays together stays together. Tom Ellis, former chairman of the Southern Baptist Convention's Council on the Family boldly claimed that "born-again Christian couples who marry...in the church after having received premarital counseling...and attend church regularly and pray daily together... experience only 1 divorce out of nearly 39,000 marriages.”

But then came data. According to research by the Barna Research Group over a decade ago, American divorce rates were highest among Baptists and nondenominational “Bible-believing” Christians and lower among more theologically liberal Christians like Methodists, with atheists at the bottom of the divorce pack. When the findings were made public, George Barna took some heat because Christians expected the difference to be more dramatic and to favor believers. Ellis suggested that maybe Barna had sampled badly. Perhaps some people who called themselves born again had never really devoted their lives to Christ. But Barna held his ground, saying, “We rarely find substantial differences" [in the moral behavior of Christians and non-Christians].

In 2008, Barna again sampled Americans about divorce rates. The numbers fluctuated a bit, but once again atheists came out painfully good from a prays-together-stays-together perspective. Thirty percent reported ever being divorced, in contrast to 32 percent of born-again Christians. Slicing the U.S. by region, the Bible belt has the highest divorce rate, and this has been the case for over a decade, with the institution of marriage faring better in those dens of blue-state iniquity to the north and west.

What is going on? Even some secularists are puzzled. Churches provide strong communities for families. Many offer marital counseling and parenting classes. Love, they say, is a commitment, not a feeling. God hates divorce. They leverage moral emotions in the service of matrimony: a righteous sense of purity rewards premarital abstinence and post-marital monogamy—replaced by guilt and shame when nonmarital sex is unveiled or a marriage dissolves. Couples who split may find themselves removed from leadership positions or even ostracized. On the face of it, even if there were no God, one might expect this combination to produce lower divorce rates.

The reality, however, appears complex. Churches do honor and support marriage. They also may inadvertently promote divorce, especially—ironically—those churches which most bill themselves as shining lights in a dark world.

To prevent that greatest-of-all-evils, abortion, such communities teach even high school students to embrace surprise pregnancies as gifts from God. They encourage members to marry young so they won’t be tempted to fornicate. But women who give birth or marry young tend to end up less educated and less financially secure, both of which are correlated with higher divorce rates.

After marriage, some congregations, such as those in the “quiver-full" movement, encourage couples to leave family planning in God’s hands. Leaders echo the chauvinistic beliefs of Church fathers like St. Augustine and Martin Luther or the Bible writers: Women will be saved through childbearing—if they continue in faith, love and holiness with propriety (1 Timothy 2:15). Such teachings grow congregations, literally, from the nursery up, but the very same attitudes that help to fill church pews can erode marital bliss. Ample research shows that for couples under age 30 marital satisfaction declines with the birth of each child. (Parenting tends to make couples happier only after age 40, when kids become more independent, and only in countries with comparatively weak social supports for aging adults.)

Secular couples tend to see both marriage and divorce as personal choices. Overall, a lower percent get married, which means that those who do may be particularly committed or well-suited to partnership. They are likely to be older if/when they do formally tie the knot. They have fewer babies, and their babies are more likely to be planned. Parenting, like other household responsibilities, is more likely to be egalitarian rather than based on the traditional model of “male headship.” Each of these factors could play a role in the divorce rate.

But a bigger factor may be economics, pure and simple. In the words of some analysts, marriage is becoming a luxury good, with each partner, consciously or subconsciously looking for someone who will pull their weight financially and declining to support one who won’t. “The doctor used to marry the nurse,” says Brad Wilcox, director of the National Marriage Project at the University of Virginia. “Today the doctor marries the doctor.” Sixty percent of college educated women get married, as compared to 50 percent of women who hold only high school degrees or lower. Couples who stay married also tend to be wealthier than those who divorce. In Barna’s 2008 sample, couples with an income of less than $20,000 a year broke up almost twice as often as those earning $75,000 or more (39 percent vs 22 percent). Advocates who want to promote traditional marriage might do well to foster broad prosperity.

Even if they did, though, they might be swimming upstream. In 1960, almost three quarters of American adults were married; by 2008 that number had fallen to a half. The difference came from a combination of two factors—more divorce and more people who had never married. The concept of family isn’t becoming less important, but Americans are increasingly flexible in how we define the term. Over 80 percent say that a single parent living with a child or an unmarried couple with a child is a family. Over 60 percent say that a gay couple with a child is a family. A growing number say that marriage is obsolete.

In one of those peculiar twists of fate, conservative Christian obsessions with abortion and sexual purity may be accelerating this trend. Naomi Cahn and June Carbone, authors of Red State, Blue State, propose that Bible-belt opposition to abortion has increased the non-marital birthrate and acceptance of single parent families:

The working class had long dealt with the inconvenient fact of an accidental pregnancy through the shotgun marriage. As blue-collar jobs paying a family wage have disappeared, however, so has early marriage. Women are then left with two choices: They can delay childbearing (which might entail getting an abortion at some point) until the right man comes along or get more comfortable with the idea of becoming single mothers. College-educated elites have endorsed the first option, but everyone else is drifting toward the second.

Conservative Christians thought they could have it all by promoting abstinence until marriage. But virginity pledges and abstinence-only education have failed. If anything, they have once again accelerated the trend, leaving Christian leaders fumbling for answers. Some hope that more flexible, egalitarian roles for Christian wives and husbands may be the answer. Others think that doubling down on traditional gender roles is where it’s at. Either way, gone is the bravado that once proclaimed marital salvation by faith alone. “Marriages and families within faith communities are no healthier than in the rest of society,” concedes Christian author Jonathan Merritt. “Faith communities must provide support systems to salvage damaged marriages.” Whether the institution of marriage itself can or should be salvaged is, perhaps, a question none of us are prepared to answer.

Do atheists do it better? That is unlikely. Divorce rate differences between theists and nontheists tend to depend on how you slice the demographic pie, and for both groups, the shape of marriage itself is changing. As culture evolves, we’re all in uncharted territory together.