The CNBC standard: Violating securities laws? That happens. Screwing up a website? Heads must roll! 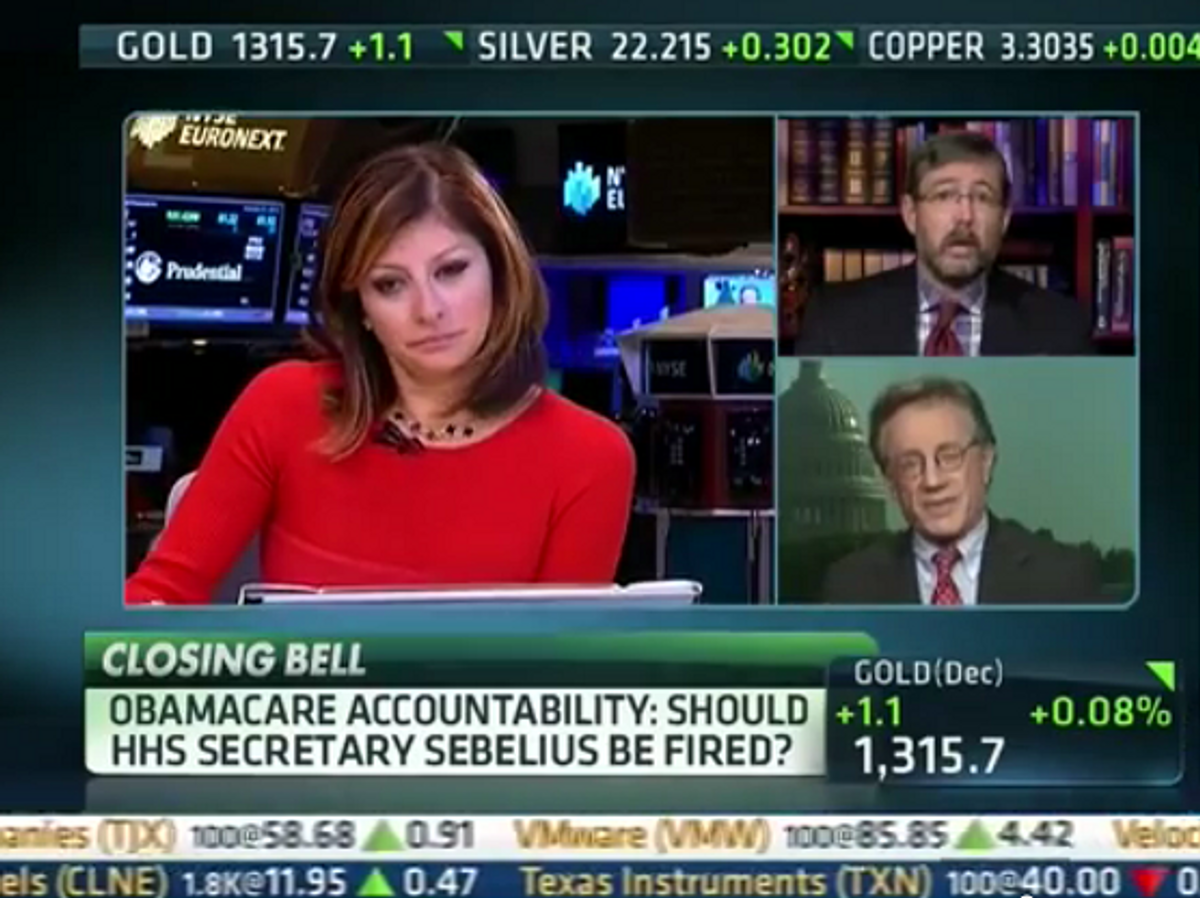 How has CNBC, the cable news channel devoted to a childlike worship of rich men and their money, covered the various problems that have so far beset the implementation of the federal insurance exchanges? You can probably guess. So far, the CNBC consensus is that the problem with the design and rollout of the Affordable Care Act's federal exchange website was a lack of private sector know-how. The solution, naturally, is for the government to operate more like, or simply turn the project over to, the private sector. Guest Ezekiel Emanuel said Obamacare needs a CEO. The CEO of eHealth offered to fix the site himself, which he is confident he can do, because he is the CEO of a healthcare ecommerce company.

Two of the funniest recent interviews were with Mike Leavitt and Tommy Thompson, both Bush administration veterans directly responsible for the implementation of Medicare Part D. CNBC's personalities for some reason didn't mention precisely how much of a disaster Medicare Part D looked like it was going to be when it launched. It's very rich to hear former HHS Secretary Thompson take so much credit for his part in that launch, which was almost universally labeled, at the time, a fiasco. "We tested every week," he says, proudly. And this was the result, weeks after the launch:

Republicans have joined Democrats in asserting that the federal government botched the beginning of the prescription drug program, which started on Jan. 1. People who had signed up for coverage found that they were not on the government's list of subscribers. Insurers said they had no way to identify poor people entitled to extra help with their drug costs. Pharmacists spent hours on the telephone trying to reach insurance companies that administer the drug benefit under contract to Medicare.

Thompson also repeats demands that someone be "held responsible," pointedly mentioning Secretary Sebelius. "Held responsible" in this context generally means "be asked to resign." And CNBC has not been reluctant to argue that someone, or someones, be held responsible for Healthcare.gov, from CNBC healthcare reporter Dan Mangan asking, "Why has no one been fired?" to Rep. Michele Bachmann asking why Health and Human Services Secretary Kathleen Sebelius herself hasn't been fired.

On Oct. 21's "Closing Bell," Maria Bartiromo reported the results of a "stunning" CNBC poll ("this of course was an unscientific poll") asking whether or not Sebelius should be fired. Then Bartiromo invited two panelists -- conservative Dean Clancy from Freedomworks, and former insurance regulator Jay Angoff -- to discuss the fact that 85 percent of CNBC website poll-answerers think Sebelius should go. Bartiromo did not particularly try to hide her opinion. Her first question: "Jay, three weeks of the exchange glitches, you really believe no blame should be put on Sebelius?"

Clancy argued that Sebelius should resign, and Bartiromo never disagreed with him. Indeed, she nearly endorsed his argument:

Clancy: "If Sebelius cannot even answer basic questions by the end of her first testimony to Congress, she should offer her resignation."
Bartiromo: "Well, that's a good point! Because, you know, it goes beyond the glitches."

This is an interesting exchange! (And it's not the only one -- similar discussions have happened on "Closing Bell" and on CNBC numerous times over the last month.) Honestly, I don't entirely disagree. I think HHS Secretary Kathleen Sebelius should probably resign, especially after she accepted full responsibility for the terrible rollout of the ACA. (She can't resign, unfortunately, because Republicans would block her replacement, but that's a different question from whether or not she should.) She isn't directly personally to blame for the website not working, but HHS and the ACA are her responsibilities, and she clearly didn't manage this effectively.

That's why this is interesting: Because CNBC anchors and pundits, and Maria Bartiromo in particular, are not always so receptive to the argument that the head of an organization should be held responsible when that organization fouls up in a major way. As you may recall, not long ago I was on CNBC, to discuss JPMorgan Chase, and its CEO, Jamie Dimon. JPMorgan Chase has been under investigation by the government for a laundry list of violations of securities laws. It was, at the time, negotiating a massive fine -- predicted to be the largest in the history of financial regulation -- for unsavory behavior in the lead-up to the financial crisis. Fines and legal bills soon led to JPMorgan's first quarterly loss in nearly a decade. My argument was simple: Jamie Dimon should resign, or be ousted, because he is clearly not managing his bank effectively.

That argument was considered insane. And it was considered insane not just by the other person in my little TV argument, who was invited on specifically to be pro-Dimon, but by Bartiromo herself, and also the other guy who was hosting at the time. Dimon was, they argued, not to blame for the activities the government was investigating, and, more important, his record as CEO has been stellar once you get past all the crime and fraud.

The failure of Healthcare.gov is a mess, but it's not a crime. It could still yet be fixed by the end of this month, and if it is, no one will have been bankrupted or foreclosed on because the site didn't work at first. If this is a fireable offense, Jamie Dimon should've been fired a dozen times by now. But on CNBC, the financial sector is held to a very different standard of conduct and competence than the government, because the financial industry's pursuit of profit by any means necessary is considered morally superior -- indeed, it's just about the height of human endeavor -- to the goal of using the government to help citizens gain access to needed services.