How do dogs think?

A neuroscientist ponders the canine brain 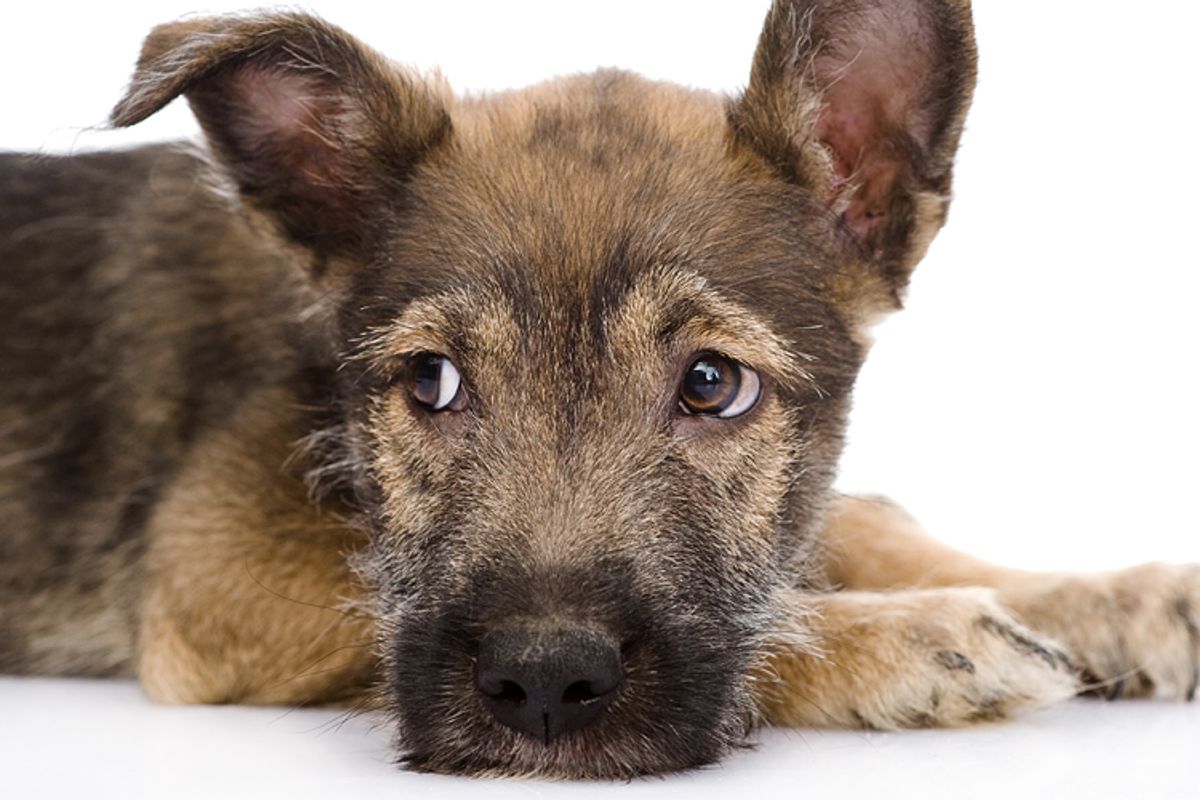 Excerpted from "How Dogs Love Us"

To truly know what a dog is thinking, you would have to be a dog.

The question of what a dog is thinking is actually an old metaphysical debate, which has its origins in Descartes’s famous saying cogito ergo sum—“I think, therefore I am.” Our entire human experience exists solely inside our heads. Photons may strike our retinas, but it is only through the activity of our brains that we have the subjective experience of seeing a rainbow or the sublime beauty of a sunset over the ocean. Does a dog see those things? Of course. Do they experience them the same way? Absolutely not.

When Lyra [the author's dog] was jumping and barking at the woman wrapped in purple, with a red dot on her forehead, Lyra experienced the same things at a primitive level that I did. Purple. Red. Screaming. Those are the sensory primitives. They originate in photons bouncing off dyes, pressure waves in the air around the woman’s vocal cords. But my brain interprets those events one way and Lyra’s brain another.

Observing Lyra’s behavior doesn’t tell us what she was thinking. From past experience, I knew that Lyra barked and jumped in response to different things. She barks when we’re eating. In that context, a natural assumption would be that she wants food too. But she also barks after dropping a tennis ball at my feet. I had no comparable frame of reference for what had attracted her to the screaming woman that night at the party.

The question of what it is like to be a dog could be approached from two very different perspectives. The hard approach asks the question: What is it like for a dog to be a dog? If we could do that, then all the questions about why a dog behaves the way it does would become clear. The problem with being a dog, though, is that we would have no language to describe what we felt. The best we can do is ask the related, but substantially easier question: What would it be like for us to be a dog?

By imagining ourselves in the skin of another animal, we can recast questions of behavior into their human equivalent. The question of why Lyra harassed the party guest becomes: If I were Lyra, why would I bark at that woman? Framed that way, we can form all sorts of speculations for dog behavior.

Many authors have written about the dog mind, and some have even attempted to answer the types of questions I have posed. I will not review this vast literature. I will, however, point out that much of it is based on two potentially flawed assumptions—both stemming from the paradox of getting into a dog’s mind without actually being a dog.

The first flaw comes from the human tendency to anthropomorphize, or project our own thoughts and feelings onto things that aren’t ourselves. We can’t help it. Our brains are hardwired to project our thoughts onto other people. This is called mentalizing, and it is critical for human social interactions. People are able to interact with each other only because they are constantly guessing what other people are thinking. The brevity of text messages, for example, and the fact that we are able to communicate with less than 140 characters at a time work because people maintain mental models of each other. The actual linguistic content of most text exchanges is minimal. And because humans have common elements of culture, we tend to react in fairly similar ways. For example, if I watch a movie that makes me sad, I can use my own reaction to intuit that the people sitting around me are feeling the same way. I could even start a conversation with a complete stranger based on our shared experience, using my own thoughts as a starting point. But dogs are not the same as humans, and they certainly don’t have a shared culture like we do. There is no avoiding the fact that when we observe dog behavior, we view it through the filter of the human mind. Unfortunately, much of dog literature says more about the human writer than the dog.

The second flaw is the reliance on wolf behavior to interpret dog behavior, termed lupomorphism. While it is true that dogs and wolves share a common ancestor, that does not mean that dogs are descended from wolves. This is an important distinction. The evolutionary trajectories of wolves and dogs diverged when some of the “wolf-dogs” started hanging out with proto-humans. Those that stuck around became dogs, and those that stayed away became modern wolves. Modern wolves behave differently from dogs, and they have very different social structures. Their brains are different too. Interpreting dog behavior through the lens of wolf behavior is even worse than anthropomorphizing: it’s a human anthropomorphizing wolf behavior and using that flawed impression as an analogy for dog behavior.

Wolf analogies have led to many flawed training strategies based on the idea that the human must be the “pack leader,” an approach most commonly associated with Cesar Millan. Unfortunately, there is no scientific basis for using the wolf ’s social structure as a model for the dog-human relationship.

Dogs can’t talk, and we can’t transport ourselves into a dog’s mind to know what its subjective experience is. Where I see a happy golden retriever playfully jumping up and down, someone else might see a hungry dog planning to eat her for dinner. So what can we do to better know a dog’s mind?

Although I hadn’t yet made the connection at the party, I would soon realize that the solution had been right in front of me all along: brain imaging.

Because all mammalian brains have substantially similar parts, a map of canine brain activation could be referenced to its human equivalent. For instance, if we saw activation in the reward center of the dog brain, that could be interpreted through human experiments that result in similar activity. With human experiments, we have a reasonably good idea of what happened to create a particular pattern of brain activation. We know, for example, that activity in the visual part of the brain can be caused either by photons hitting the retina or by the person mentally imagining a scene with his eyes closed. Similarly, if we observed activity in the visual part of a dog’s brain, and the dog wasn’t looking at anything, we could reasonably assume that it was forming a mental image of something. Dogs might have imaginations too!

Mapping between the brains of different species is called a functional homology. It means that a subjective experience like imagination can map onto both a human brain and a dog brain. The patterns of activity in the two brains would illustrate how to transform one type of brain into the other.

Philosophers dismiss the question of what it is like to be a dog as unanswerable, but functional homologies between dog and human brains could provide the missing link. Although brain imaging wouldn’t tell us what it is like for a dog to be a dog, it could provide a road map—a brain map—of what it would be like for a human to be a dog, without the bias of the human interpreter. If it worked, brain imaging could end up being a canine neural translator. We could go way beyond the question of why Lyra was being obnoxious at the party. If we could map our thoughts and feelings onto the dog brain, we could get right to the heart of the dog-human relationship: Do dogs love us?

It all comes down to reciprocity. If the dog-human relationship is predominantly one-sided, with humans projecting their thoughts onto the dog vacuously staring up at his master in the hopes of receiving a doggie treat, then the dog is not much better than a big teddy bear — a warm, soft, comforting object.

But what if the dog reciprocates in the relationship? Do dogs have some concept of humans as something more than food dispensers? Simply knowing that human feelings toward dogs are reciprocated in some way, even if only partially, changes everything. It would mean that dog-human relationships belong on the same plane as human-human relationships.

Reprinted from "How Dogs Love Us:  A Neuroscientist and His Adopted Dog Decode the Canine Brain" by Gregory Berns, by arrangement with New Harvest. New Harvest is a joint venture between Amazon Publishing and Houghton Mifflin Harcourt.

Gregory Berns, M.D., Ph.D., is the Distinguished Professor of Neuroeconomics at Emory University.