John Kasich’s redemption play: “Everyone on earth wants to talk to him”

Ohio’s GOP governor becomes a hero for expanding Medicaid, but he’s about to kick thousands off food stamps 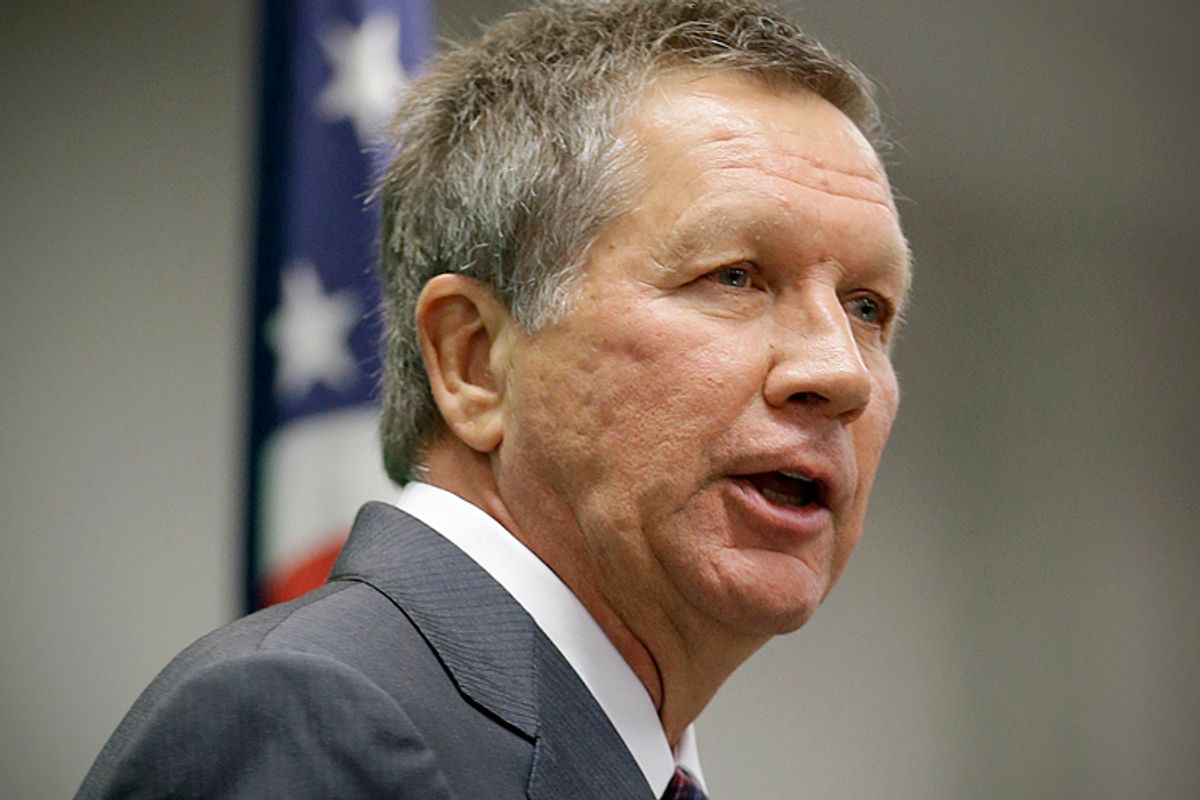 Ohio Republican Gov. John Kasich is becoming a hero to moderates for blasting his party’s Dickensian contempt for the poor in an interview with the New York Times this week.

“I’m concerned about the fact there seems to be a war on the poor,” he told the Times. “That if you’re poor, somehow you’re shiftless and lazy.”

“You know what?” he added. “The very people who complain ought to ask their grandparents if they worked at the WPA.”

The Times story got huge attention for Kasich. Paul Krugman built a column around it. When I asked to speak to Kasich, press secretary Robert Nichols told me, essentially, to take a number. “Everyone on earth wants to talk to him,” Nichols emailed. I told him I’d be patient, but he hasn’t replied.

Kasich absolutely deserves credit for accepting federal funds to expand Medicaid, against the wishes of the Republican majority in the state Legislature. It shouldn’t be exceptional – the feds pick up the entire cost for three years and 90 percent after that – but it is. Twenty-three states, all with Republican governors, have turned down the money. The Ohio governor has also expanded mental health funding in his state, citing his own brother’s struggles with mental illness. That’s commendable, too.

But on the day that food stamp cuts go into effect, I can’t believe the Times story that made Kasich a hero didn’t even mention his decision to kick up to 130,000 “able-bodied” Ohioans off the food stamp rolls by requiring them to work or get job training as a condition of receiving that aid. (Krugman didn’t mention it, either.) Kasich made the decision after his Medicaid move, and it was widely seen as a sop to the right to make up for it. (It didn’t work; Tea Partyers are still blasting him.)

But local officials say they can’t find jobs or training for most of those Kasich’s move will hit. “We don’t have nearly enough places for 15,000 people” to work, a spokesman for the Franklin County Department of Job and Family Services told the Columbus Dispatch. “Every work site we have is already filled up by people working for cash assistance,” said his Athens County counterpart. “We’ll have 1,000 people subject to this requirement and there is no way we will have work sites for them.”

I was also intrigued by Kasich’s comment about the WPA. That must mean he’d support public-works jobs programs today, right? Of course not. Nor did he support the 2009 stimulus bill that kept the country out of another Great Depression – even though he recently took credit for the completion of a big Ohio highway project that was only made possible by the stimulus.

Running for governor, he told Fox’s Sean Hannity: “Sean, you know, you and I both wished that we were wrong and that the stimulus was going to work. You and I both said at the time that it was filled with pork, special favors, backslapping one politician to another. And it hasn’t worked. And in fact, the states have abused the money." Back in the day, that's what Republicans said about the WPA, too.

So I’m finding it hard to give Kasich a whole lot of credit for bucking his party and backing the poor. The son of a postal carrier, he turned his back on his working-class roots and went to work for Lehman Brothers Holdings after Congress (you can see my “Hardball” debate about that here). Then he turned on public employees when he gutted their collective bargaining rights soon after becoming governor; voters rebuked him the next year by passing a ballot initiative to reverse the measure. Kasich has been working hard to regain the popularity he lost in that battle as he gears up for reelection next year.

I applaud Kasich's move on Medicaid. It’s just a measure of how far to the right Republicans have moved when a conservative governor who’s about to throw thousands off food stamps can make national headlines for decrying his party’s “war on the poor.”