When no one said anything: How racism goes unquestioned

Some say we should just "get over" racism, but it's not possible when so many condone it with their silence 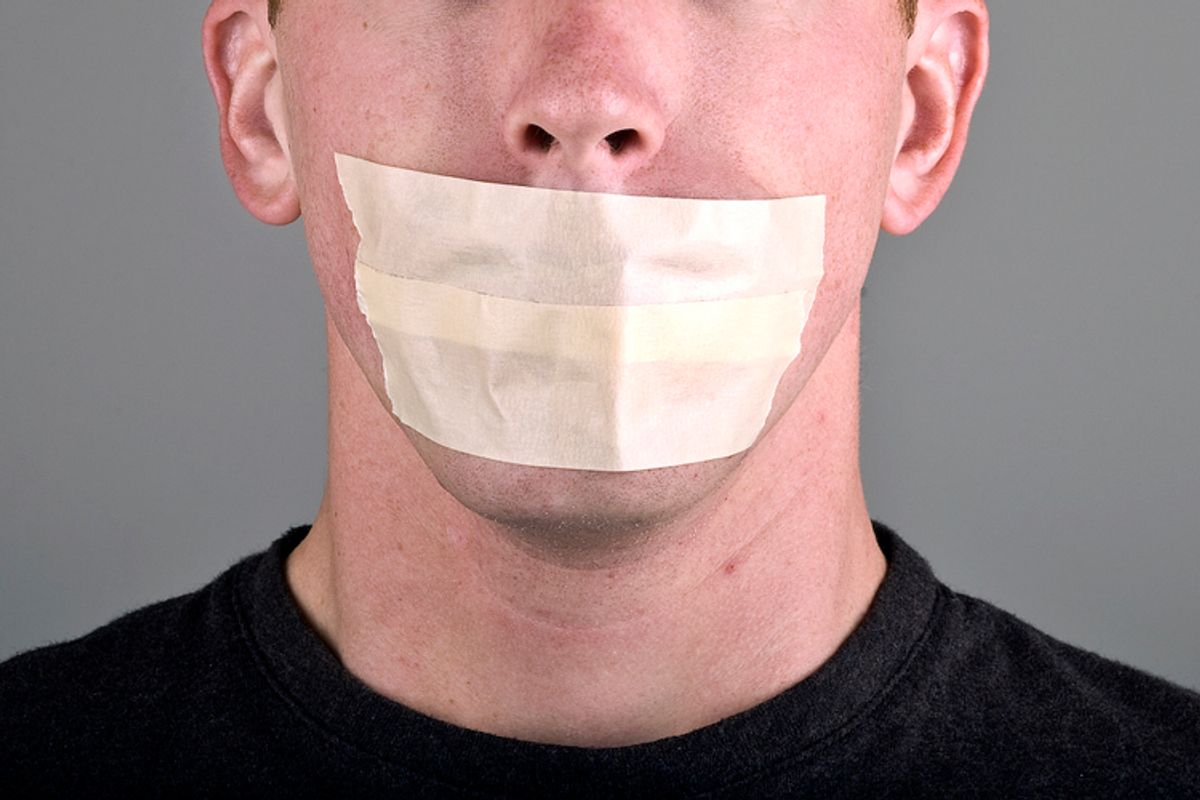 A couple of weeks ago, I was in the Dallas Fort Worth airport with a long layover. I spent the time on my laptop, catching up on grading. Out of nowhere, a white man sporting a camouflage baseball cap and a khaki rucksack hitched over one shoulder began pacing back and forth in front of me, muttering, “nigger.” I rarely type that word out, I try not to ever say it, but sometimes, you need to say “nigger,” instead of “the N-word.” Sometimes, you need to represent the world as it really is despite the discomfort that reality may cause.

I thought I couldn’t possibly have heard that man correctly. It was the middle of the day. The year is 2013. The terminal was crowded. Then this man looked right at me, raised his voice, and said, “Fat ass nigger.” Yes, he was talking to me.

We often have grand ideas about what we’ll do in such moments but I was stunned; I was frozen — angry, scared, humiliated. I wanted to cry or disappear but I couldn’t do either. I couldn’t let that man see how he had found a vulnerable place. I couldn’t let him see how, in too many ways, I am a barely healed wound.

Not one person said anything; I was surrounded by people.

At the time, I mentioned the incident on Twitter and people told me to alert security. That is, of course, the rational response to irrational behavior. I didn’t want to move, though. I didn’t want him to take further notice of me. I didn’t want him to hurt me. I was scared because here was an angry man, who was either mentally ill, or comfortable enough in his racism to speak this way to me in plain sight. If he would simply, unprovoked, call me “nigger,” there was no telling what else he might do. That’s what is always fascinating about racism — how it is allowed if not encouraged to flourish, freely, in public spaces, the way racism and bigotry are so often unquestioned.

As luck would have it, that man was also on my flight to Seattle. I was dreading the flight, four hours and change, and the possibility that his behavior might escalate at 37,000 feet. Fortunately, he was at the back of the plane and I was at the front. I never saw him again. I hope before long, I never think of him again.

But this is not about sad stories. Something uncomfortable and racist happened. That incident in the airport was neither the first nor the last time I will be called a nigger or worse. In the realm of racial injustice, this was a mild infraction, I am profoundly privileged, sticks and stones, whatever. When I consider what impoverished and disenfranchised people of color deal with every single day, I can nearly laugh that incident off.

What happened is still a true story, one that is indicative of the pervasiveness of racism, and how no part of your life is ever truly free from it. Privilege only reaches so far. I suppose I am grateful, in a twisted way, that this pathetic man was in the Dallas Forth Worth airport to remind me.

I don’t particularly enjoy talking about race, at least not like this. I don’t want the whole of my writing or my intellectual energy given over to race because I have diverse interests. But here we are, again and again. Conversations about race are often too contentious. People are set in their ways. I can admit that I am. Nothing I write here is going to change much of anything. We can fight the good fight and try to increase awareness. We can pin our hopes on the fragile notion that it gets better, while realizing that in all likelihood, it does not.

I was reminded of that moment in the airport, of the terror of being harassed by a strange man, surrounded by people bearing silent witness, offering their silence as consent, because I wrote an editorial for the Los Angeles Times about blackface and Halloween costumes, and what these choices reveal about the people who make them. Popular culture is my primary beat, it’s late October, and people have been acting crazy. Of course I was going to write about this topic. But then someone asked why I was worrying about something so trivial when many states are dealing with serious voter suppression problems. And many others said, “What’s the big deal?”

There is an odd assumption that compassion and care are finite or that critics can be everything to everyone — commenting on everything simply because they can. That’s not what cultural criticism is. People don’t have to perform their outrage about a given issue for that outrage to exist. It diminishes cultural criticism to demand constant vigilance.

I am well aware, for example, that voter suppression is a serious problem. If we’re going to consider degrees of magnitude, which is a masturbatory exercise at best, voter suppression is the more serious problem. Or is it? People who feel entitled to wear blackface either out of ignorance (Julianne Hough using blackface in her Crazy Eyes costume) or malice (idiots using Trayvon Martin’s murder for costume inspiration), are complicit, to different extents, in the dehumanization blackface represents.

In 1787, legislators from the Northern and Southern states agreed on the Three-Fifths Compromise during the Philadelphia Convention. These white men took it upon themselves to decide that three-fifths of the slave population would be counted for the purposes of taxation and representation. Voter suppression, like blackface, is a form of dehumanization. It is a modern version of the Three-Fifths Compromise. Voter suppression is legislators deciding who is and is not deserving of civil liberties and participation in the democratic process, largely on the basis of race and class. The tide has been turning for Republicans and if they cannot win hearts and minds, they will enable the legislation they need to keep those with unwinnable hearts and minds from voting.

Legislators and voting officials in North Carolina, Texas, Tennessee, Kansas, Arizona and other states are working vigorously to manipulate the democratic process by any means necessary. Of course I care about these initiatives and the people who are disenfranchised. I’m reading as much as I can and learning about modern voter suppression because I don’t yet know enough to contribute meaningfully to the conversation. No one is helped when cultural critics use their voices irresponsibly.

“Get over it,” or so it goes when we talk about the legacy of racial oppression even though the effects of that legacy are plainly visible. It would be ideal to get over it, to move on. Most of us do not want to have these exhausting, infuriating conversations about race with audiences who are unwilling or unable to truly understand where we are coming from. But here we are, more than 200 years after slavery, still quantifying how people of color should be measured in the eyes of the law and those whom those laws mean to rule.