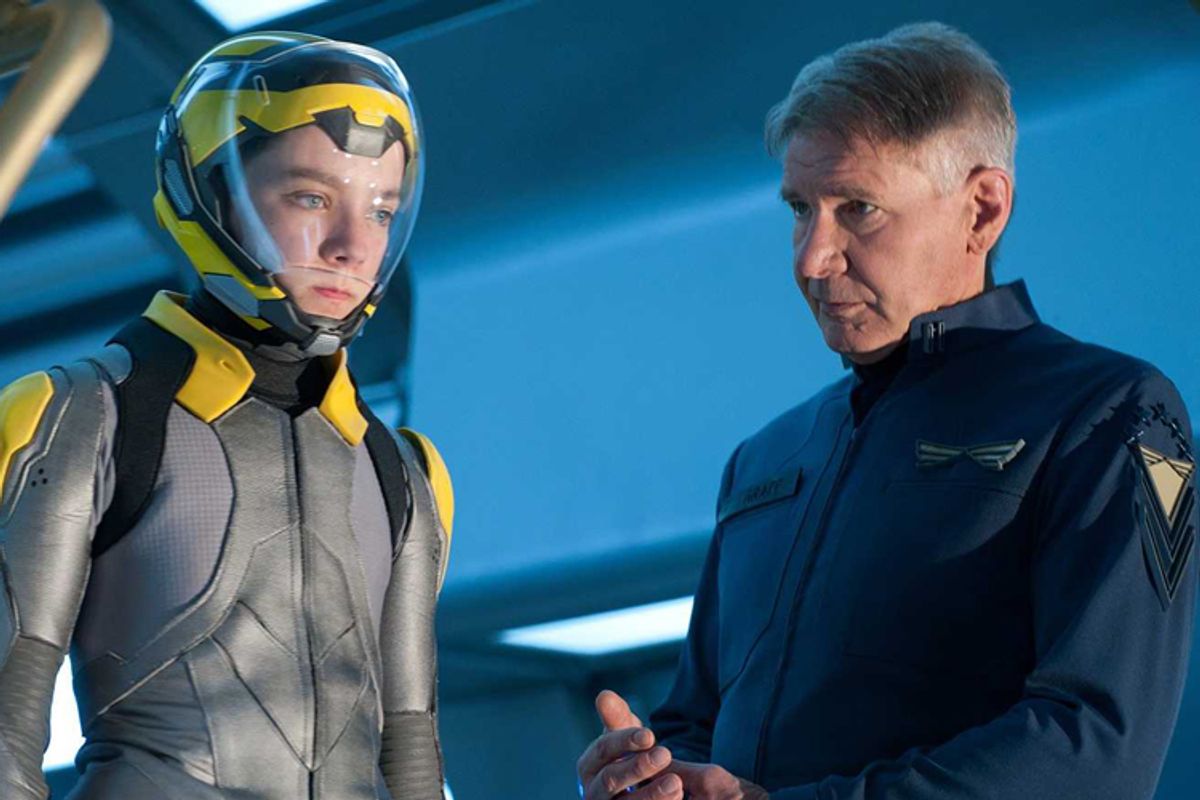 We seem greatly preoccupied with issues of historical guilt and historical reckoning these days, issues that lie at the heart of Orson Scott Card’s tangled science-fiction masterwork “Ender’s Game” and the long-awaited movie version from writer and director Gavin Hood. Which, for the record, is straightforward, a bit literal-minded, very faithful to the book and largely compelling. On one level, it’s just a coincidence of the calendar that “Ender’s Game” and “12 Years a Slave” and the Matthew McConaughey AIDS drama “Dallas Buyers Club” and the Polish thriller “Aftermath” are all hitting at the same time, all of them, in very different ways, posing thorny questions about how we deal with traumatic events of the past. But not all coincidence is random, and it’s human nature to see patterns in events we do not understand.

The movie on that list you probably haven’t heard about is writer-director Wladyslaw Pasikowski’s “Aftermath” – but you definitely would have if you lived in Poland, where the picture has provoked outrage from right-wing nationalists. It depicts a sleepy, bucolic rural village as a hotbed of sinister buried secrets, epitomized by one farmer’s discovery that the headstones from a vanished Jewish cemetery have been used to pave a country road. Even though no living person in town directly participated in the persecution and murder of the Jewish families who once lived there, the villagers have their reasons for not wanting the truth revealed, and even for resorting to violence in order to suppress it. “Aftermath” almost feels like a horror movie, with a pervasive mood of malice and fear, about people whose parents and grandparents collaborated with mass murderers, but who have convinced themselves that they are history’s victims.

There’s a strange and striking consonance between the themes of “Aftermath” and “Ender’s Game,” even though you could hardly imagine more disparate kinds of films. Both stories are about a kind of historical dementia or myopia, used to create insane justifications for inexcusable acts. (Yes, I’m likely to issue “Ender’s Game” plot spoilers; you are forewarned.) Boy-genius Ender Wiggin – played in the film by 16-year-old English actor Asa Butterfield (“Hugo”), although the character is meant to be much younger than that – has his own graveyard epiphany of sorts, after leading a genocidal campaign against an antlike alien species that he’s been told is planning an all-out war on Earth. (Card calls them the “buggers,” a word not used in the movie.)

Hood’s screenplay cannot do this aspect of “Ender’s Game” justice in less than two hours; the hidden relationship between Ender and the buggers runs throughout Card’s book as a dreamlike countercurrent to the surface story about the brutal training of a killer. (The buggers communicate with Ender through a surreal and disturbing video game, one of various ways that Card anticipated the technological and cultural future.) Still, the story’s melancholy, penitent denouement is a bizarre reversal, not quite like anything else in the imaginative literature of war. It’s as if an SS death-camp commander, indoctrinated to believe that the Jews were a despicable alien virus in Aryan Europe, had all along been listening to Mahler and Mendelssohn, reading Kafka and Proust, but only understood after the fact that he had a unique spiritual connection to the race he had labored so hard to exterminate.

We never learn much about the future Earth society of “Ender’s Game” (again, somewhat more in the book than the movie), but the military leaders who have selected and trained Ender have a lot in common with the backward Polish villagers of “Aftermath.” Growly Col. Hyrum Graff (Harrison Ford), who serves as Ender’s surrogate father, offers a chilling twist on the tough-love military archetype found in so many coming-of-age stories. Despite his paternalistic manner toward Ender, Graff only cares about the boy as an instrument of destruction – the way Oppenheimer cared about the Bomb – and actively resists learning anything about bugger civilization, or considering the possibility that humans have misunderstood the aliens' intentions. It's always crucial for a genocidal murderer to present himself as a historical victim who is fighting for survival and has no choice. This was precisely Hitler’s argument to the German people, and exactly what the sadistic slave-owner’s wife played by Sarah Paulson in “12 Years a Slave” argues: If we don’t crush them, they will cut our throats.

There’s been considerable debate about the conflicted themes and messages of “Ender’s Game” over the years, as well as about Card’s peculiar personal politics and his open hostility toward homosexuality and LGBT rights. I think that’s a tribute to the work’s enduring potency, as well as a reminder that you don’t have to be a nice person to write an important book. I also think that the moral and philosophical confusion of “Ender’s Game” is an aspect of its greatness; it's a story, not a political essay. At its core, Card’s book is about the psychic connection between war and child abuse, two of the worst things that happen in human society. Yeah, there’s also a moral quandary slathered on top, about human society confronting an alien species it can’t communicate with and believes to be hostile. But there’s no interesting solution to that hypothetical problem, despite its accidental resemblance to the Cheney-Rumsfeld rationale for invading Iraq. Anyway, that whole aspect of the story is not half as memorable as the tormented Christ-like ego of Ender, an abused child who is simultaneously victim, villain and saint -- history’s greatest war criminal and the shamanic conduit to a vanished race.

As a devout Mormon and a direct descendant of Brigham Young, Orson Card is well acquainted with the history of the Anglo settlement of the American West. “Ender’s Game” can definitely be read as an allegorical treatment of the other American original sin, besides slavery: the destruction and replacement of Native American society, which stood in the way of our nation's manifest destiny. The sentimental idea that whites who killed or uprooted the Indians became infused with their spiritual or moral essence did not begin with New Agers in the 1960s. It goes clear back to the invented legend of the first Thanksgiving feast and the apocryphal peace treaty between William Penn and the Lenape chief Tamanend (aka Tammany) in 1683. Indeed, it was a staple of American popular literature in the 19th century. Some aspects of Joseph Smith’s original Latter-day Saint theology, which have been swept under the rug in Mormonism’s corporate era, relied on the then-popular hypothesis that Native Americans were actually the Lost Tribes of Israel.

As I wrote two weeks ago, one of the subjects of Steve McQueen’s Oscar-bound “12 Years a Slave” is the enormous psychic cost inflicted on Americans of all races by the legacy of slavery. It is one thing to become dehumanized, as Chiwetel Ejiofor’s character is in that film, because you are held in bondage, beaten and forced to do or endure terrible things in order to survive. It is quite another to become dehumanized, like the Paulson and Michael Fassbender characters, by a pernicious ideology that teaches you that your freedom depends on the subjugation of others, and to refuse, for generations afterward, any serious discussion of its consequences. Whatever Card’s conscious intentions may have been in “Ender’s Game,” and whatever degree of sentimentality or sadomasochistic fantasy we may see in the work, it never flinches from the idea that a grievous historical crime has been committed, whose consequences are dire and long-lasting and for which amends must be made.

It does not strike me as entirely accidental that all these works about the price of the past are coming forward in the current political context, when a significant but angry minority of Americans is committed to undoing or rewriting as much history as possible. It should be obvious by now that the right-wing fixation on repealing or defunding Obamacare is symbolic rather than substantive. It’s a political dispute that appears to be about the present and about matters of policy, but is really about the past. Most opponents of the president’s healthcare bill neither know nor care whether it contains elements of “socialism” (which it doesn’t). What’s at stake is the ability to roll back reality, as with a spell learned at Tea-Party Hogwarts. If this aspect of a hated new American reality can be undone, then so, at least in the world of right-wing magical thinking, can everything else.

Obama himself can cease to exist – in the pornographic fantasies of birthers, he has never actually been president -- gay people and their marriages can melt back into the closet and women can vanish from corporate boardrooms, only to reappear in the kitchen with an apron and a spatula. Civil-rights laws will unwrite themselves, millions of immigrants will turn out never to have come here, the entire federal government will be revealed as a useless and unnecessary fiction. The Civil War itself can be relitigated by other means, with a different outcome (accepting, for the moment, the conventional view that the North actually won). None of this is even remotely coherent, except that it all belongs to a fantasy narrative in which white heterosexual males are history’s most persecuted and marginalized group, having absorbed all the suffering of the African-Americans and Jews and Indians and women and improved upon it in their inimitable style.

Forces that we thought were dead in American public life, like the ideology of white supremacy and the legacy of the Confederacy, have returned in zombie form, imbued with bathos and victimology. If they’re not half as powerful as they once were, they’re still too ugly to be ignored. As we’ve seen all too recently, the deranged American minority that longs to “take our country back” from unspecified usurpers is zealous, well organized and determined to befoul our political life into the indefinite future. Those forces remain dangerous, like Col. Graff in "Ender's Game" and the Polish villagers of "Aftermath," but like them cannot unmake reality. There is no blissful white-bread past to return to, because it never existed in the first place; the roads everywhere are paved with tombstones. History literally is not on their side.